WHEN I STEPPED INTO THE ROOM Michael Symon could be overheard talking on the phone with the publisher of his next cookbook. Playing with Fire (due out this spring) will be the chef’s fifth in nine years. There’s a hard and fast approach to the cover art on each and every one. His big, burnished, bald head is prominently splashed front and center. In a perhaps surprising—and likely futile—effort, one of the most instantly recognizable chefs in America is pleading for a Symon-free cover. “I feel like if people see a celebrity chef on the cover they won’t take the recipes seriously,” Symon tells the publishing house boss. “You can still use my name on the cover to suck people in and you can use beautiful food shots to suck people in…Just put that fat, bald guy on the back cover!”

There are two separate but not always consistent ingredients in the label “celebrity chef.” If food television has taught us anything it’s that style almost always trumps substance. But Symon is a chef in the plainest sense of the word. He’s been cooking in restaurants since high school when a scholarship-ending injury forced him off the wrestling mat and into the kitchen. The young cook had an instant affinity for the work and opted for culinary school over a more traditional collegiate track. He graduated from the Culinary Institute of America in 1990, three years before the Food Network was born.

Symon landed his first executive chef position at the age of 22, a mere two years after graduating. He opted to take a different route than his culinary school peers who followed up internships at New York City restaurants with permanent jobs. Instead, Symon decided to sow the seeds of his budding career in his native Cleveland. He could always go back to the Big Apple, he figured. “You have to remember that it was such a different time back then,” he explained. “Even in New York there were only like five or ten great chefs that you wanted to work for. There weren’t gobs and gobs of restaurants back then like there are now.”

A gig at Cleveland’s buzziest, busiest downtown spot immediately put the fledgling chef on the map. He parlayed that early success into his first restaurant, which he opened with his then-girlfriend (now wife) Liz. When Lola Bistro opened its doors it became the hottest ticket in town. Diners scrambled for seats at the packed bar directly in view of the open kitchen. It was there, crafting progressive Midwestern dishes like herb-crusted Lake Erie walleye with lobster pierogi, that Symon impressed some very influential guests. In 1998, Symon’s big, bald head graced the cover of Food & Wine’s coveted America’s Best New Chefs issue. 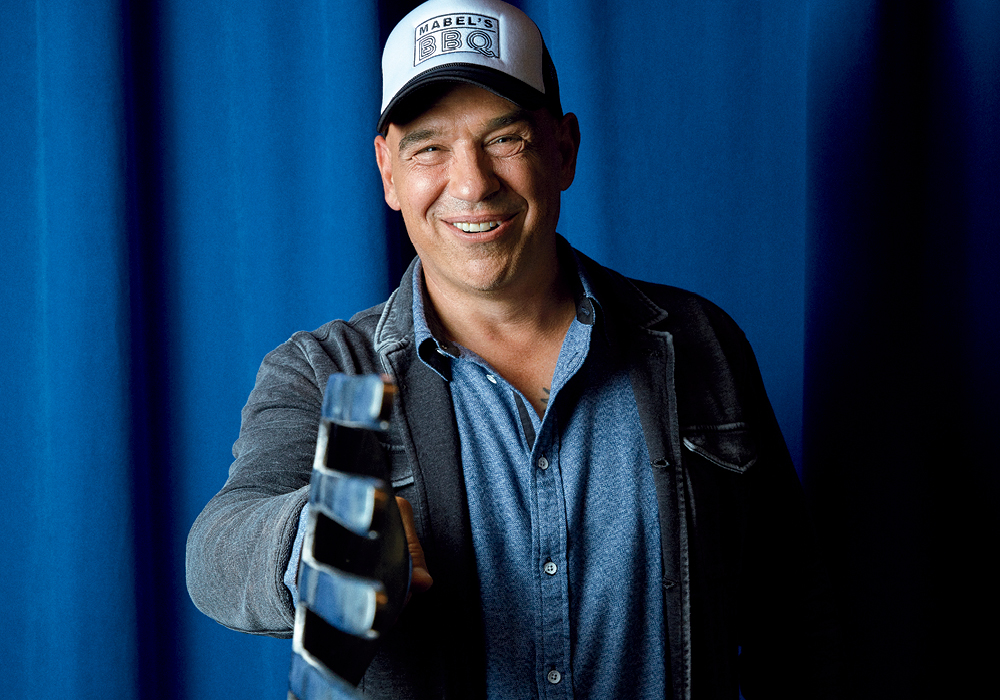 “Food & Wine started it all,” said Symon, now 48. “It was obviously huge for me, but it was also huge for Cleveland because it made people aware of what we were doing here.” Symon is fiercely loyal to his hometown—these days he splits his time between Cleveland and New York, where he tapes ABC’s hit daytime television show The Chew. Symon credits the former city for “keeping him grounded.” To return the favor, the homegrown personality has worked tirelessly to upend his city’s rusty reputation, thrusting it into the spotlight for all the right reasons. His near daily affirmations of “The Land” on the popular show (countered only by his near daily lamentations of its long-suffering football team) have convincingly made the case for Cleveland’s cool-factor.

His actions have had the most impactful results. He has turned out scores of talented chefs in the two decades since opening Lola. Many have gone on to open restaurants, continuing the progression. “You start building a little family tree and then the family tree branches out and starts doing their own thing and the next thing you know you have a culinary scene.” During that time, Michael Symon Restaurants group has grown from one restaurant to more than a dozen that include Roast in Detroit, Angeline in Atlantic City and Mabel’s BBQ in downtown Cleveland. As little as Symon sleeps (five hours a night, max) and as much coffee as he consumes (eight espressos per day, minimum) he can’t do it alone. But he’s never had to. Many in the hospitality industry struggle with talent attraction and retention, but his organization is blessed with a deep bench of ardently committed professionals.

“I started working at Lola four months after they opened, when I was 22,” said Katie Pickens, who started out making salads and is now the organization’s culinary director. “I was always asking questions and trying to gain more knowledge, even if that meant working harder, coming in earlier, staying later, coming in on days off. It got to the point where the hours I was working didn’t matter. I didn’t keep track. The chef’s reverence for this industry has taught me the importance of respecting every step.”

Symon’s charismatic leadership translates through the screen. In 2005, reporting for Cleveland’s Plain Dealer, I accompanied him to New York to attend a taping of Iron Chef America. In stark contrast to the breezy 60-minute television show, the shoot was a 14-hour marathon during which I witnessed the chef’s sports-like focus and fierceness of character—a quality that extends to everything from golf to backyard corn hole. Symon’s cuisine did not reign supreme that day but two years later he bagged a much bigger prize. After besting seven other challengers on the initial season, Symon joined the ranks of Food TV royalty as the Next Iron Chef.

He has proved unstoppable ever since. His easygoing, approachable and amusing on-air persona has kept him squarely in front of the camera. This includes continued appearances on Iron Chef spinoffs like Iron Chef Gauntlet and the forthcoming Iron Chef Showdown. Still, as successful as all of those were (and likely will be), none of them thrust Symon so prominently into the limelight as The Chew. Since its 2011 debut, the former wrestler has transitioned from celebrity chef to just plain celebrity.

Symon is building a roaring fire in his fireplace on an 85-degree afternoon in New York. He also has fires burning in a beefy off-set smoker and a wide-mouthed kettle grill just outside the back door. Technically, he’s on summer break from the show but this is no vacation. Casually dressed in a T-shirt, dark jeans, sneakers and a floor-length apron, the man has beads of sweat on his big, bald head as he glides from kitchen to grill to fireplace to smoker all the while juggling multiple cuts of meat in various stages of doneness. There are 10 people crammed in the house including his culinary director, a food stylist, a photographer, representatives from the publisher and this writer. Over the course of seven days, the chef will prepare every recipe from his upcoming cookbook. The pages focus heavily on grilled, smoked and fireplace-roasted dishes. Keeping a keen eye on every plate is Ozzy, Symon’s 100-pound Olde English Bulldog.

Symon would be the first to admit that there are few things he loathes more than strapping himself into a chair and committing the time, focus and—for him at least—frustration required to pen a book. Cookbooks (even those by famous chefs) are hardly moneymakers. So, why bother?

“Because they actually help people cook. I know that a lot of families who didn’t cook at home started cooking at home thanks to 5 in 5. That’s the part I love. You get so much feedback in the form of pictures and tweets that people send.”

In contrast to Symon’s earlier book Carnivore (a thick tome filled with complicated chef-driven recipes) 5 in 5 was designed for home cooks. The formula was derived as a Chew segment when he had just five minutes (countdown clock and all) to prepare a tasty meal using five fresh ingredients. Pantry staples like olive oil, vinegar and canned tomatoes don’t count. The book landed on the New York Times bestseller list upon its release in 2013.

In 2015, Symon earned a Daytime Emmy for his work as co-host on The Chew. Six years prior he snagged a James Beard Award for best chef. Asked which of the honors means more and he responds without missing a beat, “Beard.” The former is for celebrities, the latter chefs. For Symon, chef always trumps celebrity.