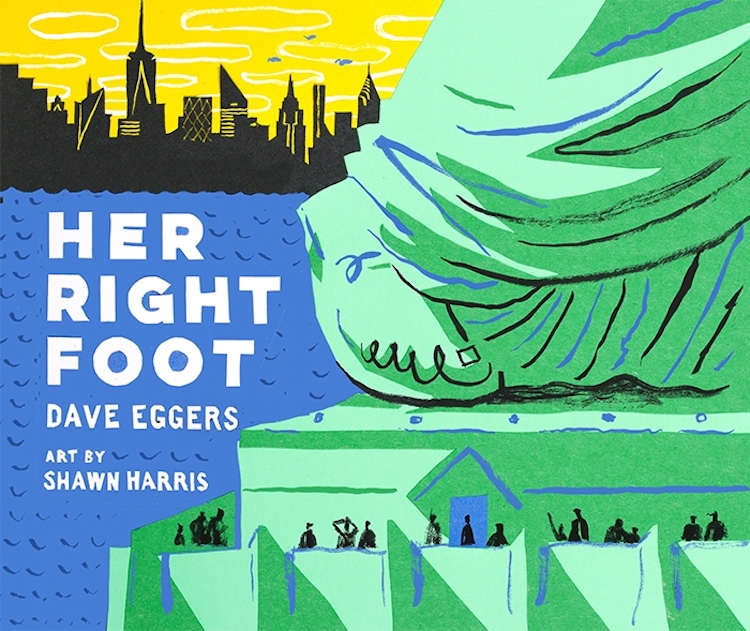 Think about all the places you’ve been and the steps you’ve taken. Imagine where your feet have walked, one in front of the other, over and over. That’s what happens when you want to go somewhere, and in the new book, “Her Right Foot” by Dave Eggers, art by Shawn Harris, there’s only one thing to do now.

For most people, the Statue of Liberty is one of the most recognizable things America has to offer, but you might be surprised to know that the Lady is really from France. Yep, she was designed by Frédéric Auguste Bartholdi, from an idea that Edouard de Laboulaye imagined, as a gift to America.

Bartholdi first made a series of smaller statues until he was sure he’d gotten everything right. Then he made the Statue–all 305 feet of her–and covered her with copper. Yes, by the way, copper is brown but it turns green over time, through oxidation. That, in case you’re wondering, is why the Statue of Liberty looks a little greenish. She’s been that way for nearly a century.

Because of her size, the Statue was originally made “in many parts.” Then she was put together and stood in France for about a year before being taken apart again and sent to America by ship inside 214 crates. Nearly a year-and-a-half later, she stood tall and proud and since 1885, she’s held many secrets.

The book she carries says “July 4, 1776.” The crown on her head has seven spikes for seven seas and seven continents. Thomas Edison–the inventor of the record player-once suggested that his invention be installed in Liberty’s head, so that she might speak but that idea was scrapped. Aren’t you glad?

You probably know what the Statue of Liberty looks like; you’ve seen pictures of her, but have you ever seen pictures of her feet? To be exact, her right foot? If you did, you’d know that it’s raised, as though she’s taking a step. Yes, the Statue, the Lady who’s welcomed “millions of visitors and immigrants to the USA,” is “on the move!”

Though it may seem otherwise, “Her Right Foot” is not a picture book for toddlers.

Small kids, in fact, probably won’t understand the goofy humor inside author Dave Eggers’ narrative–and that humor is half the appeal of this book. Very young children won’t care much about the astounding facts Egger includes, either, and they absolutely won’t grasp the ending of this book, its meaning or its place in today’s current events. Small children may enjoy looking at the artwork by Shawn Harris but even so, this isn’t a story for them.

This book is meant for elementary school kids, but older children and adults will appreciate is just as much. The sentiment that’s left when you close the covers is one you can’t miss, so go find “Her Right Foot.” Step on it!