As far back as fifth grade, Peter Beck remembers spending a lot of time in the kitchen. Growing up in New Delhi, India, he recalls cooking lentils on a slow fire after school. “My mom hardly cooked—she didn’t have time. She was working and taking care of the household. I tried to help her out.”

His good intentions quickly turned into a passion. He kicked off his culinary career by landing a job in the kitchen of a five-star hotel in Mumbai. There he was trained in various cuisines, including French and Chinese, and was later promoted to chef. He went on to cook in different countries around the world—Thailand, Philippines, Malaysia, Singapore and Italy, to name a few—before coming to America in the late 90s. Living in New York City, Beck quickly noticed Indian restaurants didn’t offer much except typical dishes like chicken tikka masala.

He sought to change that. He snagged his first job at Chola before gaining recognition for his unique twists as the executive chef at Tamarind. Both earned him favorable reviews in the New York Times; the latter also gave him a Michelin Star. 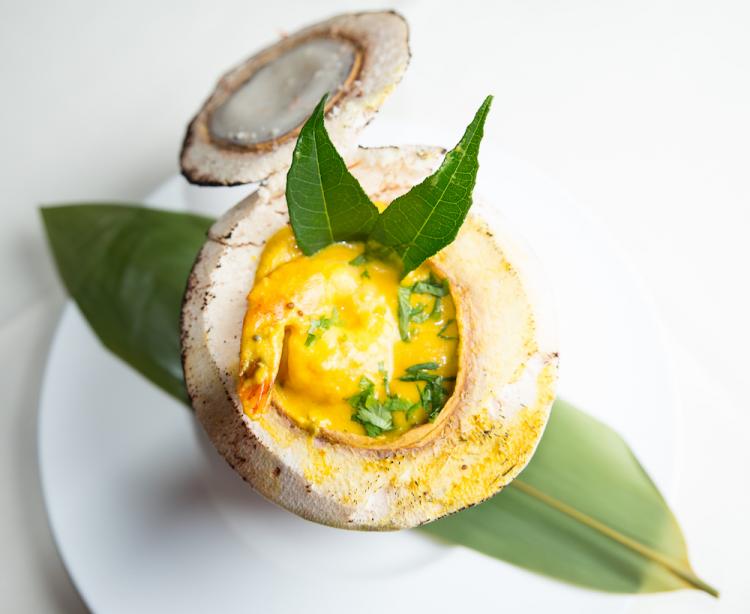 Nirvana’s Daab Chingri is made of shrimp cooked in mustard, curry leaves and coconut water cooked in a coconut shell.

A standout includes the pollichatu, a whole de-boned pompano fish with onion, tomatoes, coriander and spices. The fish is wrapped in banana leaf and then pan-cooked. Another is kesamarvai—slowly-steamed muscles placed in an Indian broth made of onions, ginger, garlic, coconut milk, Madras curry powder and tomatoes. There’s also daab chingri, shrimp cooked in mustard, curry leaves and coconut water and presented in a coconut shell, as well as fried calamari made with chickpea flour.

“I want to upgrade Indian food and expose different types of spices and variations of cooking and all the regional food from India,” he said. “From North to South, from East to West, the food entirely changes.”

Nirvana is located at 346 Lexington Ave