Heavily wooded and winding, Noyac Road serves as a path for commuters and local workmen from Southampton to Sag Harbor. One of the few clearings opens to a small family farm that touts having “a little bit of everything.” The large green and white egg-shaped sign welcomes visitors to North Sea Farms with its barns, planted fields and roaming animals. Owned and operated by third generation farmer Rich King, the farm is gearing up for the holiday season and the following winter break.

It’s a sunny and unusually warm day in November, and more than 900 turkeys are roaming in the last days of sunshine. Their season on Long Island is short. Arriving as poults or chicks, the turkeys come to the farm in the summer and by Thanksgiving, most, if not at all are gone. “This year we got them July 25, which is late,” King said. “They’re not going to be as big. I’m noticing a trend of not-so-big turkeys.”

5:30am: King arrives at the farm. His mornings this time of year are simpler and quiet as he opens the farm stand store, which houses fruits, vegetables and herbs. Then he checks out the farm’s different animals. “I walk through and make sure everybody’s alright,” he explained. “Turkeys are very sensitive.”

8:30am: King is making sure the feed is full and he refills the smaller feeders if needed. The large feeders are refilled every 10 days, and now they switch to a fattening feed to get the turkeys nice and plump. 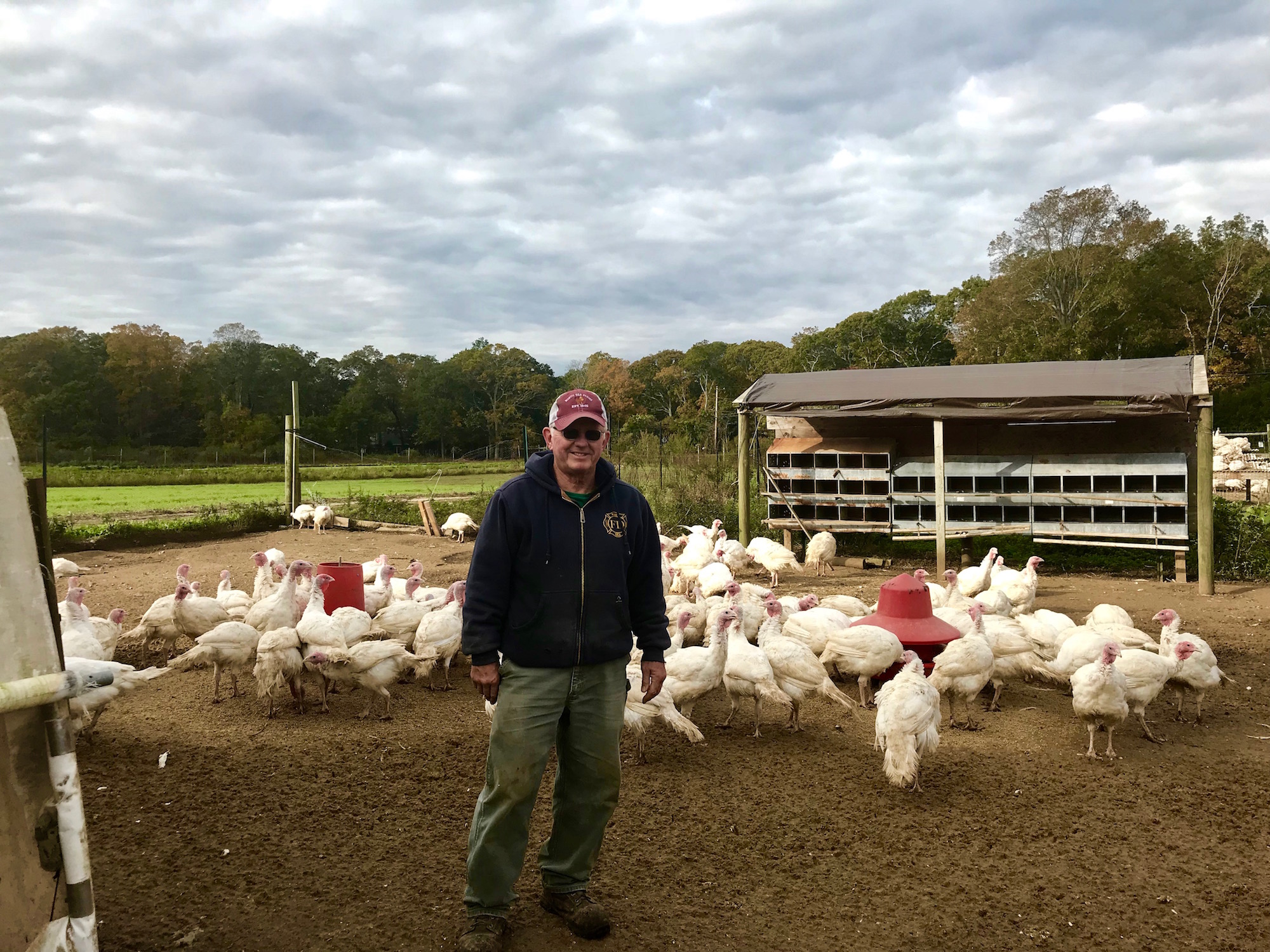 In the beginning of November, it’s more of a waiting game for the turkeys to keep growing to a size suitable for a Thanksgiving dinner. Over the next few weeks, they will continue to gain weight, currently taking on an extra half-pound per day. Despite this year’s birds being smaller than the usual 25 to 30 pound ones, King is confident it won’t be an issue. “If you stare at them long enough they won’t grow,” he joked. “If I leave and come back after a week I will be like, ‘Oh my God!’”

The first few weeks after the turkeys arrive are the most critical. They are kept in a brooding house with a 95-degree incubator, enclosed in a wooden ring. The reason for the circular shape is to prevent the poults from becoming trapped in a corner by others, and potentially suffocating. After this time, the turkeys are transferred to hoop houses where they will remain for another few weeks before coming out to feed. After that, they roam around freely. “It’s like raising children,” he laughed, explaining most of the hard work happens in the beginning. “The first month is rough.”

In 1945, when the farm was established by King’s grandfather, the primary stock was dairy cows. The family began raising turkeys about 20 years ago. “We added these just to see what would happen, and it became big,” King said. Poultry and eggs are also a large part of the business, in addition to vegetables.

Currently working with the turkeys only occupies just a few hours of King’s day. When it comes time to prep for Thanksgiving orders, the work intensifies. A processing room housed inside a new barn with cement floors provides ample space in a clean setting. Though the details are dirty, the process is humane. Once finished, turkeys are placed in a cooler—never frozen—for families that come to pick them up beginning the Saturday before Thanksgiving to Turkey Day itself.

“There’s something about a fresh bird [compared to a frozen one],” King said. “People don’t believe it until they try it. It’s worth it.”

11:45am: Late in the morning the farm stand is up and running, and calls begin to come in for people wishing to reserve their Thanksgiving bird. Connie Mott-Hopping, who works at the farm, asks customers for the size they’re looking for, informing them the smallest is 12 to 14 pounds. “A pound per person and two pounds for leftovers,” she said of the farm’s general rule when customers order a bird.

When customers come in to pick up the turkey, the farm provides cooking instructions and also reminds people to look inside the bird. “People have cooked it with the plastic bag of innards,” King said. The farm always includes the neck and other parts sometimes used for cooking.

6:30pm: A typical day in season on the farm is around 12 hours, and King has finally returned home. He is also a pastor at the Cutchogue Presbyterian Church splitting his time between the North and South Forks. But on the rest of this day, he’ll prepare for the winter, plant cover crop and harvest the last of summer tomatoes, lettuce, eggplants and other vegetables that should have been out of season by now. “I have tomatoes that never should have made it, but they did,” he said. As for the turkeys, “That’s the extent of it. Now it’s just really watching them.”