It is one of those impossibly perfect summer evenings in the French countryside. Despite the slowly fading sun, the temperature is still balmy and the scent of the scattered rose petals carries on the breeze as guests gather in the grounds of a postcard-perfect château. Soon, a commotion indicates that the evening’s guests of honor have arrived. Natalie Portman, elegant in midnight-blue velvet, is here with her husband, Benjamin Millepied. On this occasion, the couple is here to fête the launch of the new incarnation of Miss Dior, the fragrance of which the actress is the long-time face.

Portman is famously private, which makes it feel particularly intimate when she gives a welcome speech that includes mention of her love for her husband before the hundreds of guests. She carries off this classic Hollywood sweetness-and-light act brilliantly—she actually seems to radiate as she mingles—but it belies the steely attitude and fierce intellect that have carried her from child star to Harvard graduate, Oscar-winner, mother-of-two and activist.

When we meet properly the next day, the 36-year-old looks girlish in a black miniskirt, ballet pumps and a navy Dior T-shirt bearing the slogan “We should all be feminists.” (Honestly, she could be 16). Still, it has been a busy year for Portman. In February, she gave birth to her daughter Amalia—who she is apparently feeding between interviews. The birth came mere days before the Oscars, when she was nominated in the Best Actress category for her portrayal of Jackie Kennedy.

Despite being in the last trimester of her pregnancy, Portman masterfully paid tribute to Kennedy’s poised but pared-back style with a series of uncannily Jackie-esque red carpet outfits (pictures of her in a chartreuse Prada gown beside a retro image of the former first lady were all over social media).

“It was very scary to take on a part that people know so well, because it’s very exact what you need to do to get them to believe you,” she said of her role in the Pablo Larraín film Jackie that imagined Kennedy’s psychological response to her husband’s assassination. “Normally you have a bit more latitude to play with, but it was fun to become more creative within those limitations.”

Portman became a household name playing Padmé Amidala in the Star Wars prequel trilogy beginning in the late 90s. It was fitting filming while she was studying for her psychology degree and a long way from having starred in her first film, Léon: The Professional, at age 13. In the Thor films of 2011 and 2013, she played astrophysicist Dr. Jane Foster, embracing her role as a female scientist partly because, “It is those little things that makes girls think it’s possible.”

Then there was her haunting turn as Nina, the prodigiously gifted but troubled ballerina in Darren Aronofsky’s psychological thriller Black Swan, which won her an Oscar in 2011. It was on the set of Black Swan that Portman met Millepied, a renowned ballet dancer and choreographer. She gave birth to their son Aleph in June 2011 and the couple married in August 2012 in an intimate Jewish ceremony in California.

Dance remains a shared passion for the couple. “I love to dance. I don’t really do ballet anymore but I do other kinds of dance,” Portman said. “I see a lot of performances because of my husband’s work [he is the founder of the L.A. Dance Project company]. We’re very lucky to have it as an integral part of our lives. It’s the one art that everyone does in every culture in the world. As soon as kids can stand they dance, clearly it’s an essential part of human expression.”

In 2015, Portman directed her first film, A Tale of Love and Darkness, an adaptation of Israeli writer Amos Oz’s memoir in Hebrew (Portman was born in Israel but moved to the U.S. when she was three, spending most of her youth on Long Island). “I spent months working on my Hebrew,” she laughed. “I would definitely love to do more directing. I feel so lucky because I’ve had dozens of experiences seeing different people work and getting to see what does work and what doesn’t. I’m looking at projects now but, of course, once you have a family it becomes a much bigger issue because it’s not as easy any more to just go to New Zealand for four months, for example.” 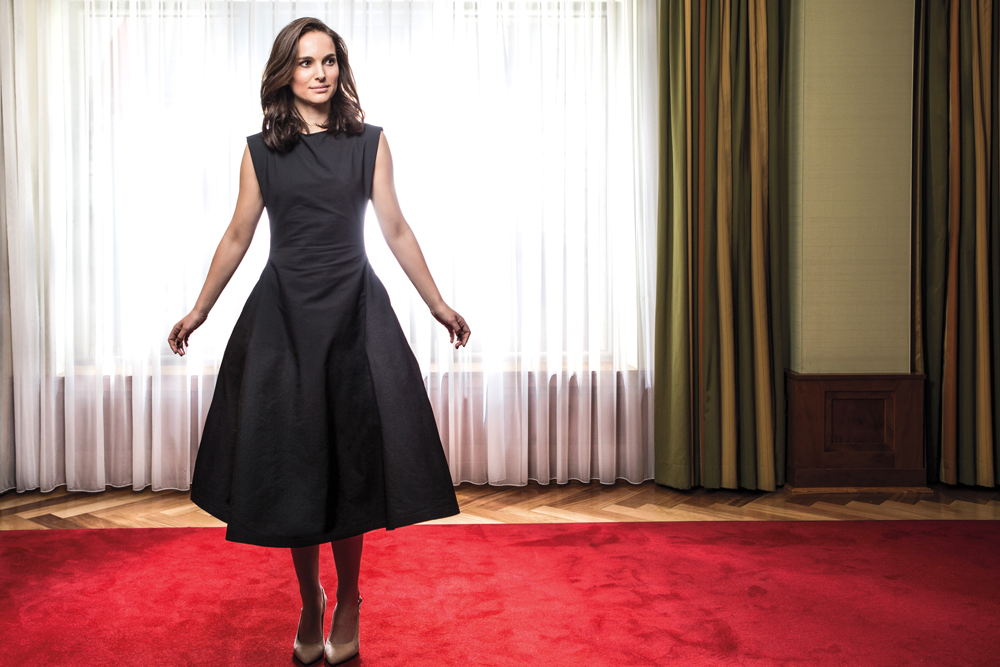 She has worked with Dior since 2010, but for an actress who is also a political activist (she took to the campaign trail in support of Hillary Clinton) it now must feel like a particularly good time to be working with the brand. Last year, the house appointed its first female creative director, Maria Grazia Chiuri. That “We should all be feminists” tee—a slogan borrowed from Chimamanda Ngozi Adichie’s book of the same title—is one of Chiuri’s first designs. It’s clear Portman is a fan. “It should be more normal to see a woman in that position. She’s so strong yet so feminine. She really appreciates beauty and empowering women. She knows how to make clothes that women want to wear and that are both luxurious and practical for our lives.”

Although some have wondered how a fashion label creating clothes glamorizing feminist slogans can really further the cause, Portman says it’s about starting a conversation that might not otherwise happen. “It helps define feminism as what it is, which is human rights. It’s not trying to say that women are better than men, as it’s sometimes misinterpreted.”

The Miss Dior perfume was first introduced in 1947 by Christian Dior to complement his revolutionary “New Look” designs and has become a classic. “Suggestive, mesmerizing and sensual” is how François Demachy, Dior’s nose, describes the fragrance. He has painstakingly reimagined Miss Dior, combining wild rose, Grasse rose and Damascus rose with citrus notes of blood orange, mandarin and Calabrian bergamot and final flourishes of pink peppercorn and rosewood. It’s a blend that retains all the romance of the original fragrance, but with a modern kick.

It is the life of Catherine Dior, the designer’s sister and an inspiration for the fragrance, that fascinates Portman. “Her story is incredible: she was part of the wartime resistance and was even jailed for standing against the Vichy regime,” she explained. “She was very strong-willed and that became Christian’s ideal of a passionate, free, independent woman.”

Portman is a woman on a mission too, albeit a significantly less risky one. One of her latest projects is Eating Animals, a documentary adaptation of Jonathan Safran Foer’s bestselling book about factory farming, which she narrated and co-produced. “I’ve been vegetarian since I was nine. I always really cared about animals. As I got older, I started learning about the environmental impact and animal-welfare aspect of eating animals. I also learned about factory farming and the way that even dairy and eggs are produced. That made me not want to eat those either.”

Despite being the face of a fashion house, Portman’s everyday style is low-key—you’d probably walk past her in the supermarket. But she says her look has evolved since becoming a mother. “I definitely wear a lot more dresses because it makes you feel put-together without having to make a lot of choices. I even choose shoes that I can just slip into. You make practical choices that still make you feel elegant.”

As for the style advice she’ll be passing on to Amalia? “I think that you want to find pleasure for yourself. It’s not about impressing other people or looking a certain way for men,” she said firmly. “It’s how you make yourself feel beautiful and give yourself joy.”