Steppenwolf’s 1968 chart-topper “Magic Carpet Ride” hit the scene the same year that Rolls-Royce released its Phantom VI. That car continued a lineage that had defined automotive luxury since the first Phantom I was released in 1925. Hardly new, “Phantom” is the oldest model name in automotive history, but (like some rock bands) the last of the “old school” Phantoms partied well past its prime. By the time the final Phantom VI rolled out of the Crewe factory in 1991, it was as out of style as spats and tails at the Polo Lounge.

Rolls-Royce languished throughout the decade. It was sorely in need of an infusion of modern technology, capital and customers. BMW saw an opportunity and acquired the company in 1998, built a state-of-the-art factory at Goodwood in West Sussex, England, and set about creating a new luxury benchmark. That outcome—the seventh in the lineage—was simply called Phantom. Launched in 2003, it was the first new of its kind in 35 years and proved to be a game-changer for the marque. Like its six Phantom forebears, it was a monumental statement, yet one that was remarkably contemporary. It was so good a car that it catapulted Rolls-Royce—founded in 1904—into its second centennial. 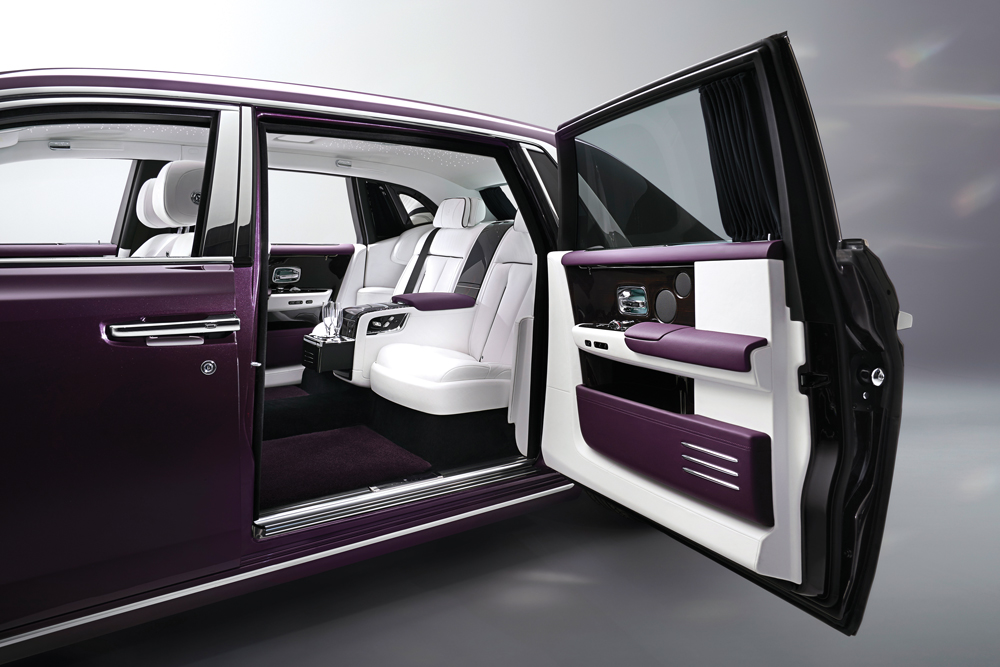 Step inside Rolls-Royce’s “Architecture of Luxury.”

Separated from its Phantom patriarch by nearly a century, the 2018 Phantom ushers in the eighth generation of Rolls-Royce’s flagship—respectfully tipping its hat to the past while defining the future of luxury as only Rolls-Royce can proclaim it. Giles Taylor, Rolls-Royce Motor Cars director of design, is the man responsible for fashioning the new Phantom, reimagining the car with changes that are evolutionary, yet significant and immediately apparent. Parked alongside its predecessor, the new generation is softer and more fluid. Its grille sits higher, integrated into the surrounding bodywork, as are the LED headlamps. The hood is longer, higher and without a strip of bright work. Its svelte lines whisper “speed” and its profile maintains the classic 2-to-1 proportions that give every Rolls-Royce its inimitable stature. Its rear aspect is elegantly tapered, instead of abruptly truncated and pinched. The new Phantom assumes a formal presence like no other luxury sedan. And while an imposing sight, Taylor designed the Phantom to be always graceful—even deferential—when coming upon, that is overtaking, other cars with which it shares the road. Through the Phantom VIII, Rolls-Royce expresses its “Architecture of Luxury,” fundamentally a new chassis on which all future Rolls-Royce automobiles will be built. This aluminum spaceframe structure is lighter and stiffer than conventional unibody designs and can be engineered to optimum specifications for specific models. Its lightweight works in concert with self-leveling air suspension and four-wheel steering to create the ride quality for which Rolls-Royce motorcars have long been famous. They call it “wafting,” and no other automobile does it. Here, one imagines silently soaring above the landscape on what Rolls-Royce illusionistically calls a “Magic Carpet Ride.”

That ride is one that Aladdin could scarcely have imagined. The V12 engine of the Phantom is now twin-turbocharged to deliver more power and torque, which spools up at a low 1,700rpm for smooth and near-instant acceleration. 60mph is achieved from standstill in less than 5.3 seconds through an eight-speed Satellite Aided Transmission that drives the rear wheels and shifts using GPS data to select optimum gearing. Despite its formidable size and weight, this power allows the Phantom to cut through the air with impunity. Yet one never loses sight of the Phantom as a car of substance. Pressed into service, for instance, hauling a case each of Pauillac Premier Gran Cru (Châteaux Lafite, Latour and Mouton), the largest Rolls will tip the scales at 6,000 lbs. And because Phantom owners are certain to be persons of substance, the 19 cubic foot trunk can accommodate cases of the other two First Growths, along with one or two of madame’s preferred champagne. 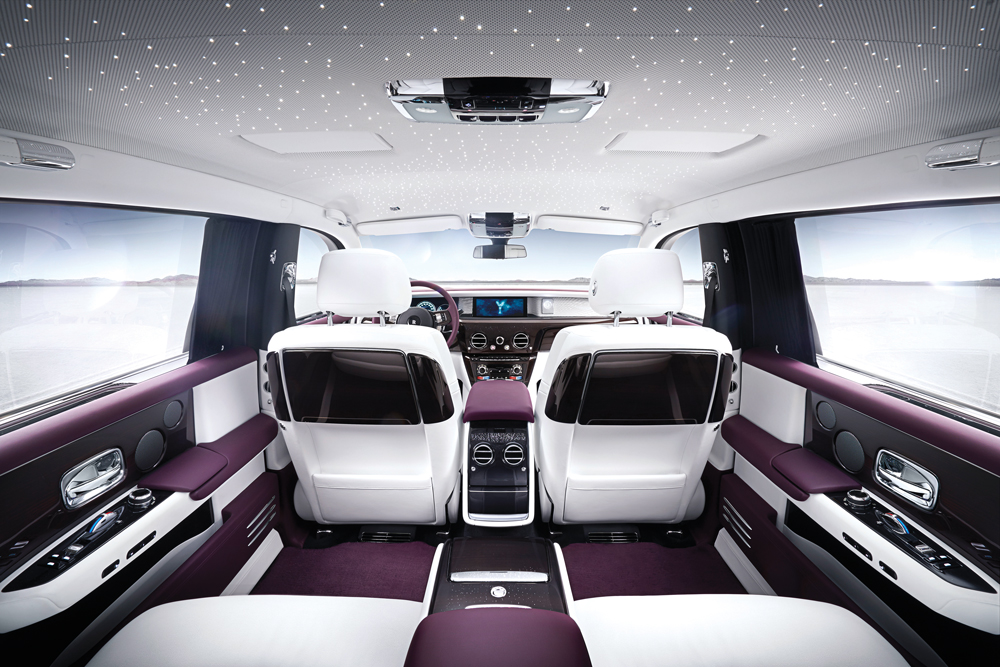 Rolls-Royce engineers have designed the inside of the Phantom to be the most tranquil, comfortable and refined environment imaginable. While unapologetically luxurious, the cabin remains understated and in perfect keeping with the marque’s well-bred demeanor. Pristine surfaces are not gratuitously embellished and a mélange of leather, wood and jewel-like metal and glass combine to welcome driver and passengers. Supple, soft and flawless, there is simply no other seat like a Rolls-Royce seat. A concession to old world charm necessitates that wood is a feature in the rear cabin of every Rolls-Royce (available in a variety of species, panels door interiors, center consoles, dashboard and picnic tables). Those back seats can be ordered in five configurations: individual seats with an occasional armrest, individual seats with a fixed center console, a cozy lounge seat or, for the ultimate in wafting, a sleeping seat. The handmaiden of waftability is silence and it is here that the manufacturer has for some time claimed that the clock is the loudest sound that could be heard inside a Rolls-Royce. Its 286 lbs of sound insulation, double-layer glass and other absorptive materials make this Phantom “the most silent motor car in the world,” according to its engineers. This serene environment is equipped with numerous and mostly-inaudible electronic safety systems, including distance sensors, cameras and an alertness assistant that monitors a driver’s eye movement to warn of impending drowsiness.

Let us not forget that Rolls-Royce is all about “bespoke.” It would be a waste to not indulge in creating a signature Phantom, the sky is the limit when appointing the interior. The Bespoke Option Skylight Headliner uses nearly 2,000 fiber-optic strands to create a celestial starscape above occupants’ heads. The most exceptional feature is the Gallery, conceived by Taylor to be an expanse of glass spanning the width of the dashboard. Behind this are the instruments and a much broader area to display just about anything. Customers can specify a standard Gallery in silk, wood, metal or leather. Or, those more inspired can commission their preferred artist to work with Rolls-Royce, who has already created Galleries with paintings, feather collages, porcelain roses and even a gold-plated “map” of one owner’s DNA. The new Phantom comes to America in spring 2018, priced from about $450,000.