To become possibly the greatest sculptor of all time, a painter to popes and kings, the creator of the Sistine Chapel’s iconic fresco, Michelangelo held true to one fundamental: he began each masterpiece with a drawing. The ability to coax emotion, thought and the sense of the human soul from cold stone or ground pigments was rooted in his peerless skills with pencil, chalk and ink on paper. It earned him the nickname Il Divino—the divine one—among contemporaries. “Drawing is the first thing he uses to create a painting, to create a sculpture, to create architecture,” said Carmen C. Bambach, Metropolitan Museum of Art’s curator in the Department of Drawings and Prints, “It’s what unifies his career.”

In an exhibition that has taken more than eight years in the making, more than 130 of his drawings, three major sculptures, the artist’s first known painting and a rare architectural model are on display in the Met’s Michelangelo: Divine Draftsman and Designer. It’s a generational gathering of delicate works on paper that almost never travel, brought to New York from more than 50 museums and private collections, including those of Queen Elizabeth II, the Uffizi Gallery, the Louvre and the Vatican. “At a time when much of our initial experience as student scholars or general public art is inundated by digital images it may be a rare privilege to see so many original works of art by such a great master,” said Bambach, who organized the show.

Seeing spotlighted masterpieces on darkened walls in room after room of original works by one of the greatest artists of all time is breathtaking. Then, about halfway through the galleries, the Met delivers an unexpected showstopper. They’ve installed an enormous backlit reproduction of the Sistine Chapel’s ceiling, suspended above a gallery dedicated to that work. The ability to look from the sketches to the finished work, to see what went into the making of Michelangelo’s vision of heaven and earth, is extraordinarily rich and can only be experienced here. It’s stunning and dramatic.

Yet many of the quieter moments are just as profound. Two drawings, “Portrait of Andrea Quaratesi” and “Female Figure Seen in Bust-Length from the Front (Cleopatra)” hang adjacent to each other. In each, the softness of the line and subtlety of shading make it look as though puffs of smoke fell onto the page and organized themselves into likenesses that somehow seem to breathe. In these, the hand of the artist is almost invisible, in others, he gouges lines into the paper with a sculptor’s force. Delicate shadows, the gentility or vigor of a line and the gradual, imperceptible divide between black and white can only be seen in person. “Michelangelo was a sculptor,” explained Bambach. “You look at one of his drawings and you see him not only searching the contours on the paper, but in the final contours, he goes very hard, almost as if he were carving…That all is evidence that’s completely flattened in a photograph.”

The show gives a glimpse into the most personal output of an incomparable genius. Drawings are like a pictorial diary of artist’s ideas. Bambach likened seeing them to looking over Michelangelo’s shoulder as he worked. “Five hundred years can melt away as we look at the drawings.”

Michelangelo’s thoughts, second thoughts, questions and exclamation marks, seen on these pages, reveal conversations with himself that led to some of the world’s most exquisite works of art. “Studies for the Libyan Sibyl,” a double-sided drawing in red, black and white chalk, is one of the masterpieces of the Met’s collection. It was the preparatory sketch for the prophetess of Greek antiquity in orange and pink robes in the Sistine Chapel. In the painting, the reproduction of which hangs above the drawing, the figure strikes an elegant, torquing pose, with cascading drapery falling below magnificent, uncovered shoulders. Only powerful arms could support the enormous weight of the book she not just holds, but holds up to divine light, as she simultaneously gazes down toward the viewer. In order to convey the symbolism of the gesture, the strength of the figure and the complex contrapposto pose, Michelangelo had to study movement, weight, balance and anatomy. What’s seen in the drawing is what’s underneath the flowing lines and glorious color. It’s the armature of a skilled sculptor. 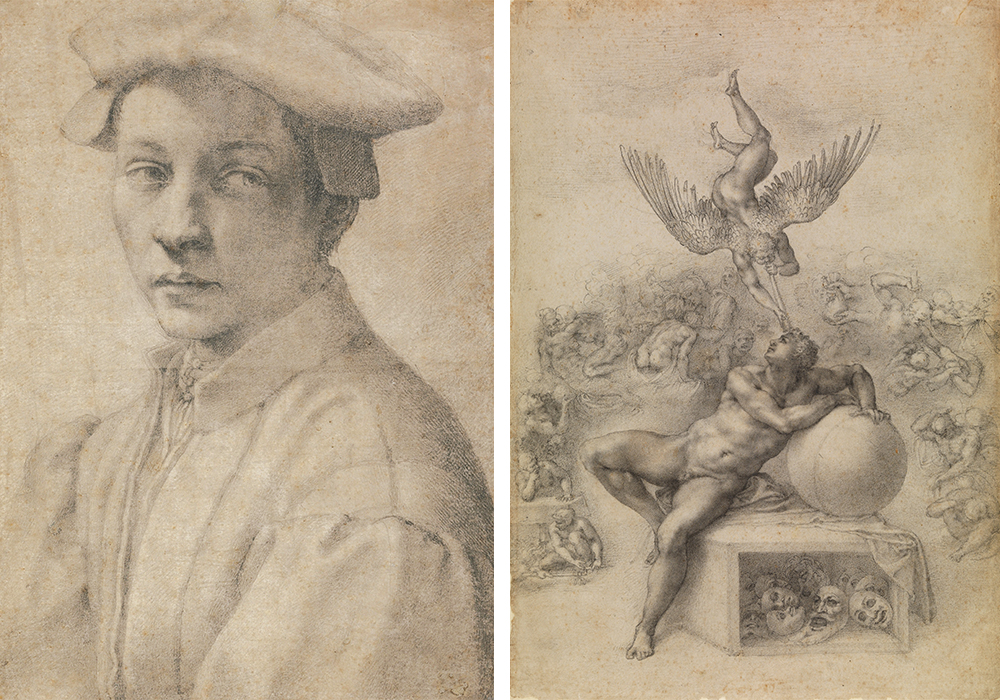 From precise descriptions of muscles and bones (even jotting down a “3” to note the number of ribs) to multiple repetitions of fingers and toes to make sure they were correct, Michelangelo worked out his ideas on this page. “It’s almost like an engineer of the figure,” Bambach said. “To repeat the toes three times, one begins to see that the figure is going to be resting much of the body’s weight on those toes.”

The exhibition covers all periods of Michelangelo’s career and presents his many talents. More than an artist, he was also an architect, a prolific poet, a designer and draftsman, a student and a teacher. Michelangelo Buonarroti was born in 1475 near Florence. Were it not for tight family finances, he might never have been apprenticed to Domenico Ghirlandaio, a successful Florentine painter whose work also appears in the exhibition. It wasn’t long before the student surpassed his teacher and went on to become famous, wealthy and admired. He died at age 88 when he was still, Bambach said, “carving marble with ferocious intensity.” In his lifetime, Michelangelo did nothing less than redefine beauty and the possibilities of describing the human form for every artist who came after him.

At the same time as presenting the work of a singular artist, the exhibition is also meant to open a conversation that carries beyond the Met’s walls. Daniel Weiss, the Met’s president and CEO, said, “It’s indisputable that Michelangelo is one of the world’s great geniuses, and this gives us an opportunity to come together and reflect on what’s most important in our civilization. This is a unifying exhibition. We want people from all over the world to come and see this, to reflect on what he contributed and what it means. Ultimately, the greatest impetus for peace is to bring people together around shared interests and a common cause.”

While the exhibition is, at times, transcendent, it’s rooted in the output and story of a complex, talented, but very human man. Bambach chose works that bring that across. “He was pretty quarrelsome,” she said. “His poetry, his letters, his love of beautiful men, his Herculean energy and the ambitious scale of his sculptures, paintings and buildings, his extremely calculated collaborations with other artists, in all these endeavors, Michelangelo’s preliminary drawings provide arresting, intimate glimpses into his imagination.”

In showing Michelangelo’s mind, his works and struggles, Bambach hopes viewers will leave with a sense that goes beyond this astonishing collection of drawings and sculptures. That in seeing Michelangelo’s works, the audience will find “that there is something higher than ourselves. I think that there is a sense of spirituality and a sort of hope in what mankind can accomplish.”