There is something magical about travelling to the cradle of the Alpine for a winter holiday. Europe simply does the whole log fire, cowshed-chic thing so impossibly well. Add to that a constellation of Michelin-starred restaurants and the heritage of resorts like Zermatt and Chamonix—on whose peaks intrepid mountaineers and pioneering skiers have played for centuries—and the allure of the Alps is clear as day.

However, North American resorts have been beating the ski socks off Europe for snowfall these last few winters. Cities like Jackson Hole and Whistler have an awful lot going for them: more terrain, fewer crowds, better grooming and slicker lift systems than many of their European counterparts. If you have your heart set on Euro-worthy flair but also want reliable snow, a less complicated language barrier and more time spent skiing than traveling, find your way to these North American destinations.

Related Content: What to Pack for a Ski Vacation 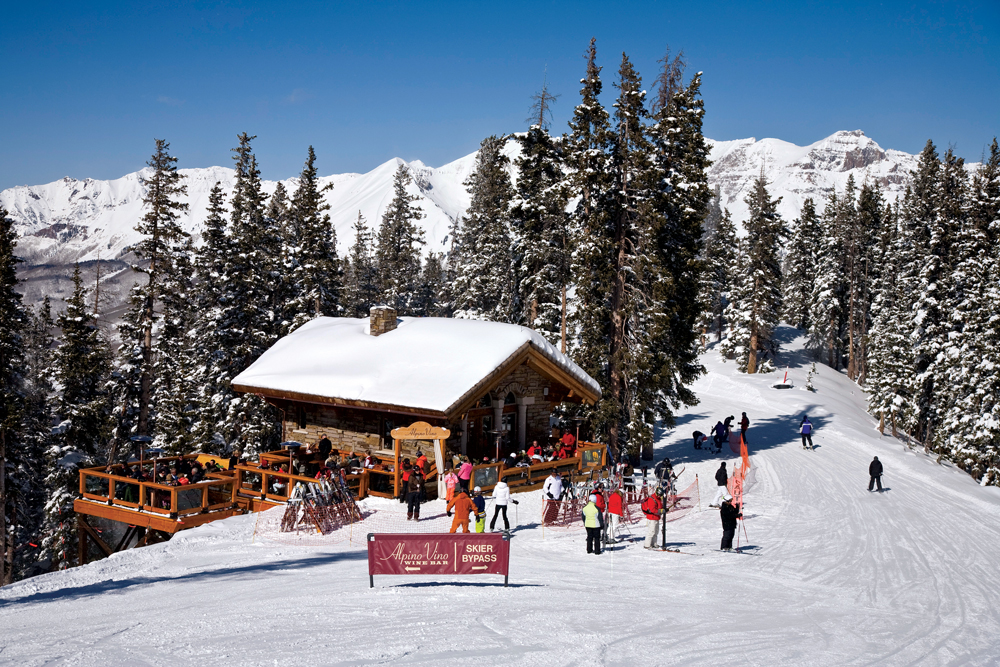 What better retreat is there than wine? image: telluride ski resort

Zermatt is justly celebrated as one of the most picturesque towns in the Alps. A chocolate-box perfect maze of cobbled streets is lined with centuries-old chalets and plush hotels hunkered at the foot of the Matterhorn. It’s also a foodie gem. The town and surrounding mountains are liberally peppered with fire-warmed restaurants that lure skiers off the slopes with the promise of wafer thin air-dried hams, unctuous fondues and hearty ragouts. The winning combination of scenery, history and cuisine is hard to equal but Telluride makes a very worthy rival. Shoehorned into a box canyon in the dramatic San Juan Mountains (known as the “Switzerland of America” for its jagged beauty), the historic mining town is sprinkled with restored Victorian houses and is where Butch Cassidy staged his first bank robbery back in 1889. Telluride’s burgeoning foodie scene has led to it being touted as the contender to Aspen’s culinary crown. Fare runs the gamut from 221 South Oak’s “Ski In Ski Stout” marinated bison hanger steak to Cosmopolitan Telluride’s legendary lobster corn dogs to authentic Italian pasta enjoyed in North America’s highest restaurant: the adults-only Alpino Vino.

It’s not only the wine and antipasti that are reminiscent of Zermatt. Telluride’s scenery and ski terrain echo the drama and steeps of Europe with 2,000 acres of sheer slopes, bumps, chutes, powder bowls and some of Colorado’s most abundant hike-to backcountry ski terrain. The hottest in accommodations is Dunton Town House, an exclusive-use, five-bedroom getaway in the refurbished home of a former miner. The property bears all the hallmarks of its legendary sister property, Dunton Hot Springs, and its sensitive renovation pays tribute to the many immigrants who traveled to Colorado from the Austrian-Italian border province of the South Tyrol.

Chamonix and Jackson Hole are on the bucket list of every passionate skier. The cities deliver some of the most challenging ski terrain in the world. Chamonix’s dramatic setting at the foot of Mont Blanc—the highest mountain in the European Alps—has served as a home away from home for explorers, mountaineers and skiers for centuries. A head for heights is required merely to reach the starting point of its signature run: the 12.5-mile-long Vallée Blanche. The off-piste ski route necessitates a 1,744-foot ascent by cable car to the shark’s tooth tip of the Aiguille du Midi before roping up for a stomach-clenching ridge walk. Jackson Hole’s backdrop is no less impressive. Stand in the purpose-built Teton Village at the base of Jackson’s ski area and prepare to be transfixed by Rendezvous and Après Vous mountains above. Together they make up 2,500 acres of predominantly steep, demanding ski terrain with a bonus 120 square miles of open-gate backcountry in the bowls behind Rendezvous.

Where Chamonix does France-meets-Scandinavia après-ski and glamour, the town of Jackson Hole does authentic Wild West bars and homely inns. Fortunately, locally brewed beers and burgers come as standard in both towns. Snake River Brewery & Restaurant crafts a particularly impressive range of beer, best enjoyed on the spot with house-smoked brisket, pulled pork and bison and beef chili. Stay at the Amangani hotel (set in a remote, high mountain valley) for an unforgettable Wyoming experience. Sure, it’s a 20-minute drive to the slopes but in return you get mesmerizing views of the Grand Tetons (best admired from the bubbling comfort of the infinity hot tub), unparalleled tranquility and some of the best food in all of Wyoming. 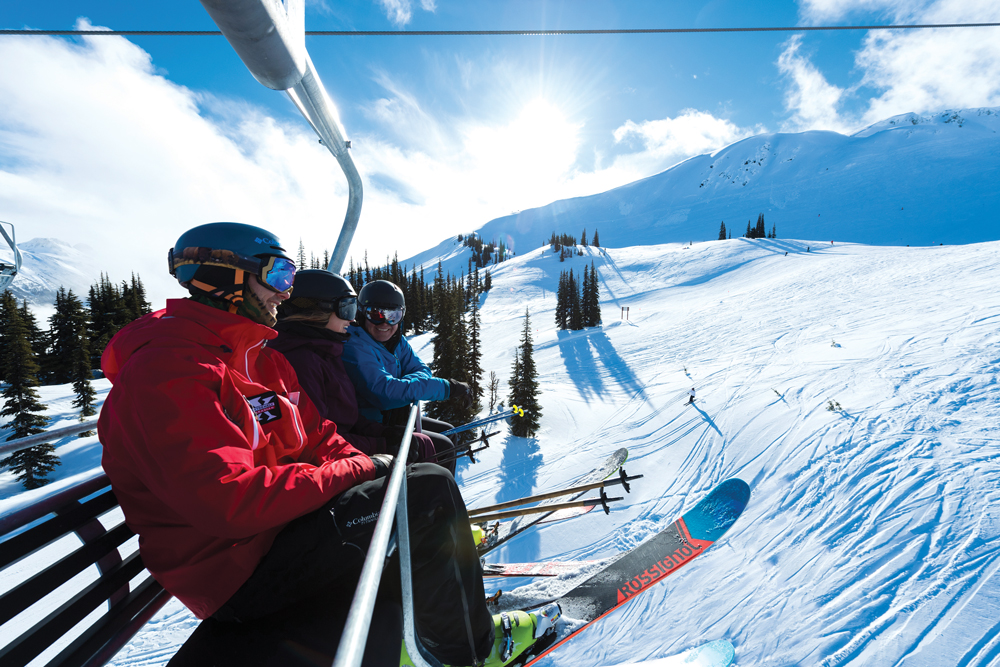 The picturesque Tyrolean village of St. Anton packs serious ski punch. It is after all the birthplace of Johann “Hannes” Schneider, the “Father of Modern Skiing” who conceived the Arlberg technique of downhill. St. Anton has gone on to become the lynchpin of Austria’s largest linked skiing with a heady cocktail of thigh-busting trails, legendarily steep off-piste descents and boisterous nightlife…all packaged in a quaint mountain town. Across the pond, Whistler Blackcomb ticks off most of these boxes and then some. A resort of superlatives, Whistler boasts North America’s greatest skiable acreage (8,171 acres), its largest high-speed lift system and one of its longest ski seasons (November to May). This ski leviathan serves up more than of 200 marked trails, 16 powder bowls and three glaciers spanning the vast mountains of Whistler and Blackcomb. Where St. Anton is best suited for powder hounds and strong intermediate skiers, Whistler Blackcomb pleases all abilities from beginners to Olympians. 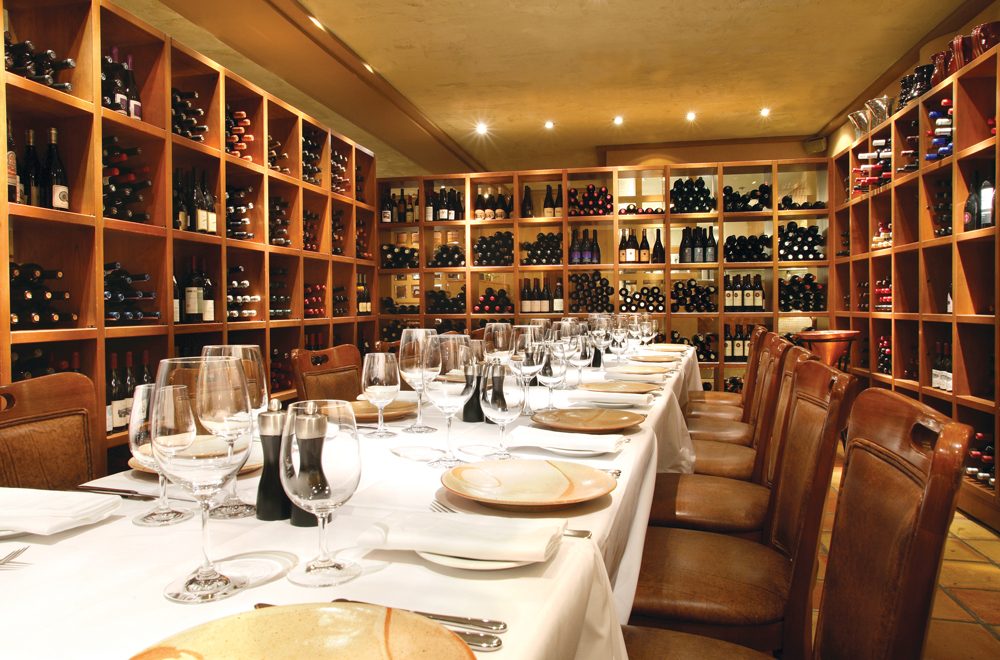 There are more than 11,000 bottles of wine on the wall at Araxi. image: steve li

On top of all this ski magic, the resort delivers some of Canada’s liveliest après-ski: terrific shopping and extremely classy dining—what’s not to love about apéritifs at the Bearfoot Bistro Champagne Bar followed by oysters and truffle fries at Araxi? Top off the luxury by staying at the Four Seasons Residences. The swanky apartments offer ski-in/ski-out access to Blackcomb and have a dedicated ski concierge and mountain guides to boot. 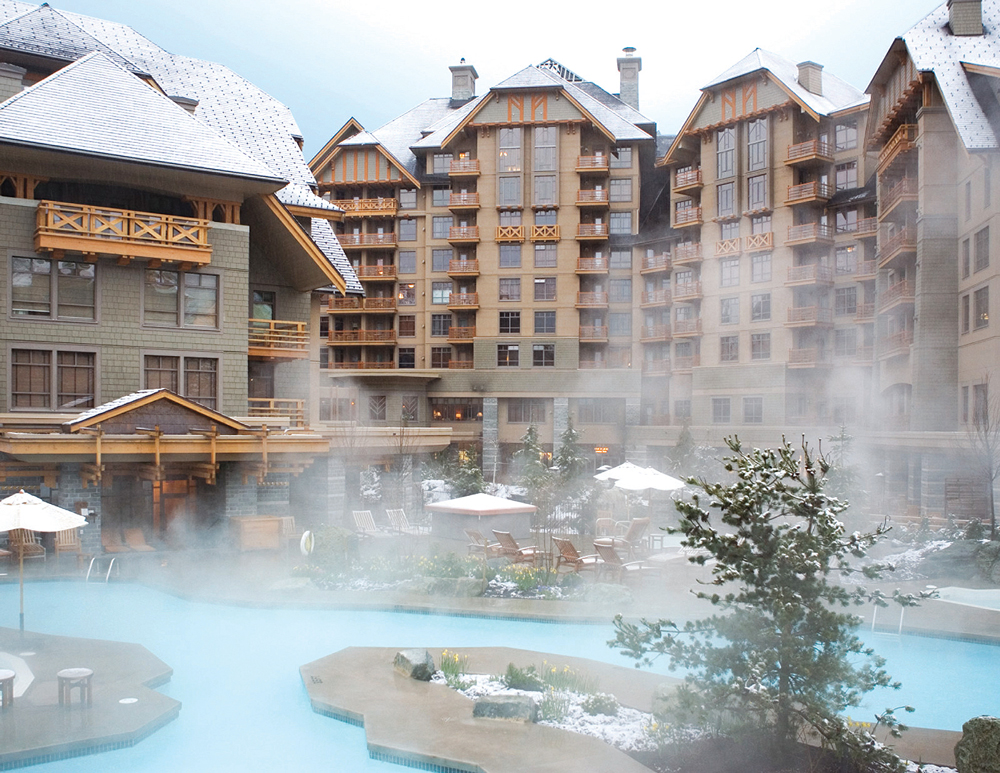 France’s Three Valleys ski area is the lift ticket to Alpine bliss for those who love scooting around seemingly endless ski trails. Comprising 373 miles of pistes, it’s Europe’s largest linked ski area and boasts three world-class resorts: Courchevel, Méribel and Val Thorens. There’s something here for everybody from gentle nursery slopes and intermediate cruisers galore to blow-the-budget hotels, Michelin-starred restaurants and toe-curlingly steep couloirs. If size is what matters, skip straight from Europe’s largest ski area to Park City. When Vail Resorts linked Park City and Canyons Resort in 2015, a powdery behemoth with more than 7,300 skiable acres was created—that’s over 300 trails, 8 terrain parks and 14 bowls. And those meandering trails, tree-punctured bowls and chutes are all doused in some 300 inches of the state’s trademarked “Greatest Snow on Earth” each winter. Like the Three Valleys, Park City is a crowd pleaser. It offers a diverse range of ski terrain, accommodations and dining options.

Canyons is just four miles from Park City and makes a great ski-in/ski-out hub. But don’t eschew the vibrant, rustic feel of Park City in favor of convenience. Many of the city’s original 19th century miner’s homes and saloons have been preserved and now house chic restaurants, boutiques and art galleries. Soak up Park City’s freewheeling vibe from the comfort of Washington School House, a 12-room hotel in a converted schoolhouse that dates back to 1889. Awash with period features, French antiques and vintage Scandinavian furniture, it’s a lesson in chic design, intuitive service and effortless cool. 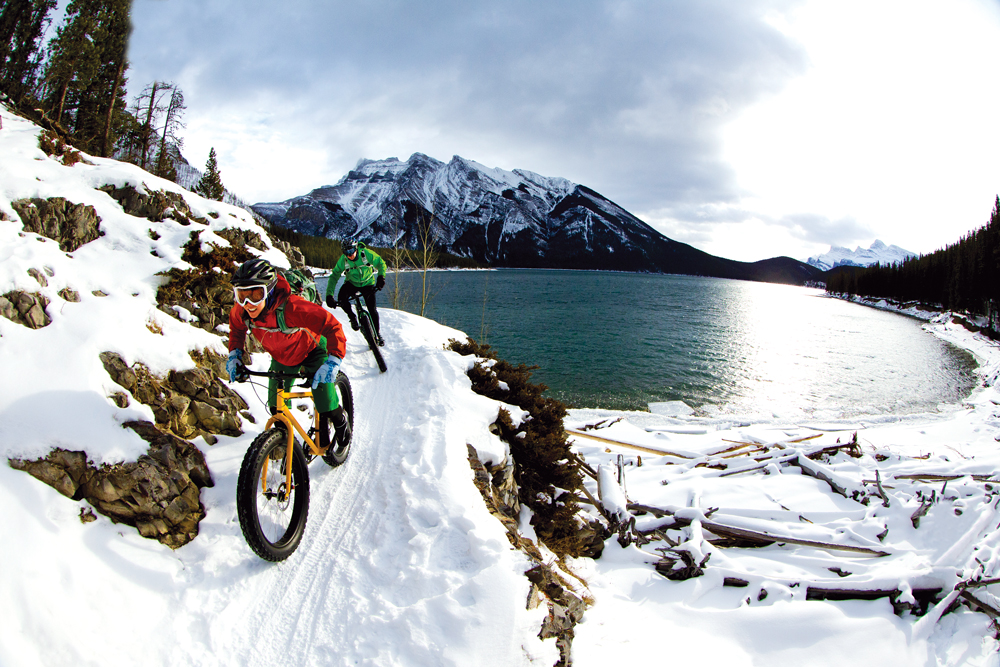 Skiing is not the only adventure to be had in Banff National Park.

Some ski towns are all about the skiing, which is perfect if you’re a first-to-last-lift kind of skier. For those looking for a touch of la dolce vita—extended lunches on sunbaked terraces, scenic winter walks to mountain huts and après-ski retail therapy—a more rounded destination is required. Monterosa ski area in Northeastern Italy incorporates some 115 miles of pistes spanning the ancient towns of Alagna, Champoluc and Gressoney. On clear days, skiers are rewarded with views of Europe’s three highest peaks (Mont Blanc, the Matterhorn and Monte Rosa) from the largely intermediate-friendly slopes. Skiing in Banff also requires you to wrench your gaze from the views (and your belly away from the melt-in-the-mouth Carpaccios and feather-light pastas). Banff boasts a winter landscape rich with glaciers, ice fields, towering granite peaks, turquoise lakes and wild animals. Keep your eyes peeled for moose, which occasionally stroll across the ski trails. 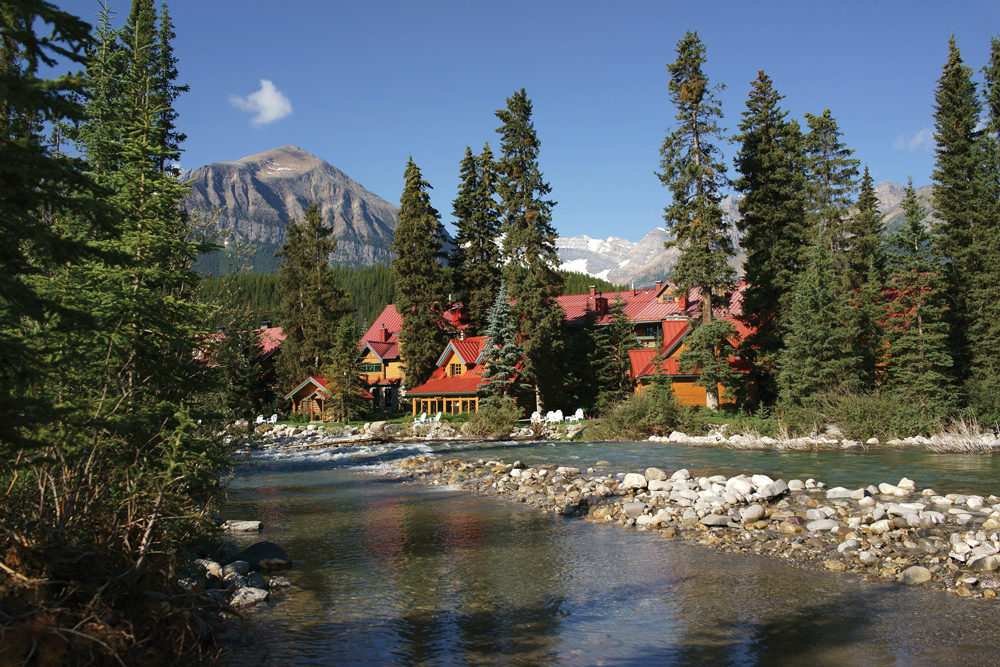 The Temple Mountain Spa is a blissful escape from the slopes. image: post hotel and spa

It’s well worth exploring beyond Banff’s extensive 7,500 skiable acres too. Trade in skis for some husky sledding, ice climbing or snowshoeing and don a head torch for an eerie night time ice canyon walk. Enjoy well-deserved downtime between all this outdoorsy play at the Post Hotel & Spa in Lake Louise. The historic hotel and smattering of log cabins is set on the shores of Bow River, combining rustic mountain style with creature comforts. Enjoy wood-burning fires, worn leather armchairs and a wood-paneled traditional Swiss fondue room as well as a super slick spa, highly acclaimed restaurant and 25,000-bottle-strong wine cellar.