Gorgeous Long Island estates, including ones filled with history, hit the market this year. From longtime singer Perry Como’s charming Sands Point colonial to Jackie Kennedy’s childhood summer home on the East End, the extraordinary properties are filled with character and amenities galore. They are also on sale for eye-watering prices. Get ready to marvel at these six noteworthy Long Island homes that went up for sale in 2017. 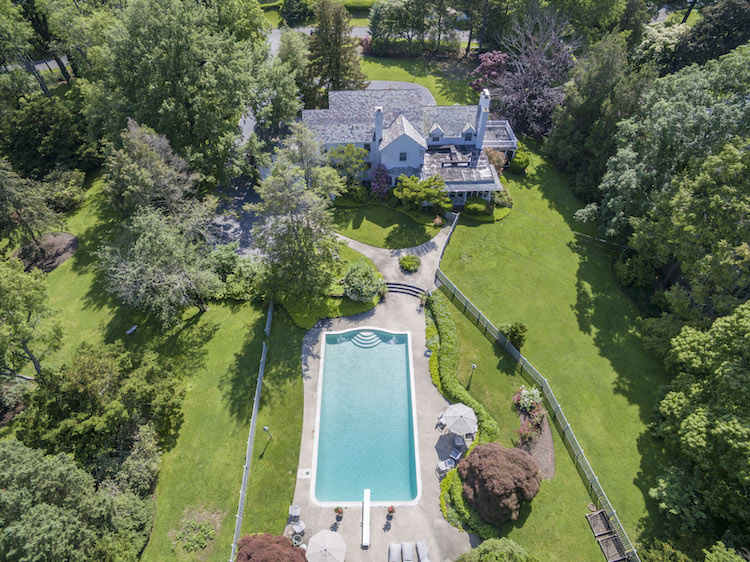 Once home to Italian-American singer and TV personality Perry Como, this 1937 Sands Point colonial emulates a charm that can be attributed to its roots. Como had the longest-running music label relationship of any artist beginning in the 40s and lasting for more than half a century. Best known for his Christmas television specials and hit songs like “Papa Loves Mambo” and “Till the End of Time,” Como became a North Shore resident 38 years ago and raised his 3 children in the Sands Point colonial. He continued to visit Long Island every year after moving to Florida with his wife in the 70s. The home still retains remnants of Como—one of the bathrooms has an original caricature of him painted on the wall with a quote that reads, “Ladies will please stay seated during the entire performance!” The expansive property includes five fireplaces, a pool paired with a cabana adorned in old Hollywood style and land that spans 2.5 acres of park-like grounds. 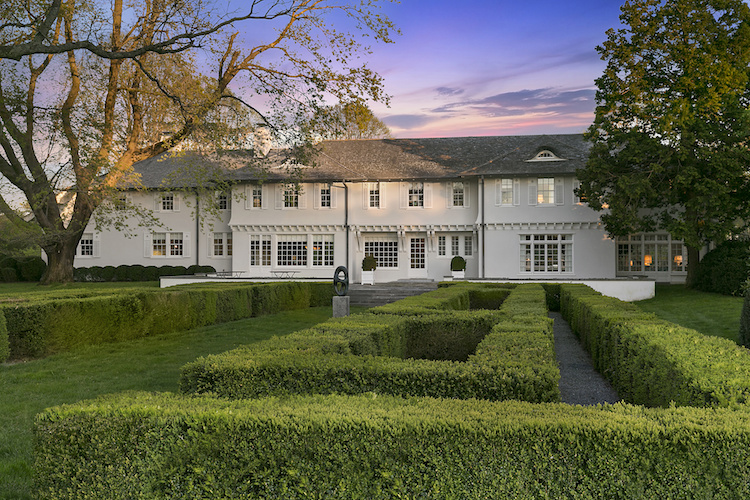 As a child, Jacqueline Kennedy spent summers in this East End home during the 1920s. Elegantly bestowed the name Lasata, a Native American word meaning “Place of Peace,” this historic property is unequivocally one of the grandest estates of East Hampton village. Although outfitted with spare-no-expense renovations by its latest keepers, they ensured that the house retained some original architectural elements. They used reclaimed 200-year-old oak to repair the original floorboards preserving the creaky-lived-in quality. The main house has 8,500-square-feet of living space with 10 bedrooms and 11 baths. It’s encompassed by seven acres of expansive green grass adorned with retreat-like landscaping that complements the grounds. If that doesn’t seem extravagant enough, the property boasts a one-bedroom guest house, a two-bedroom pool house and a sunken grass tennis court situated further down the property lines. 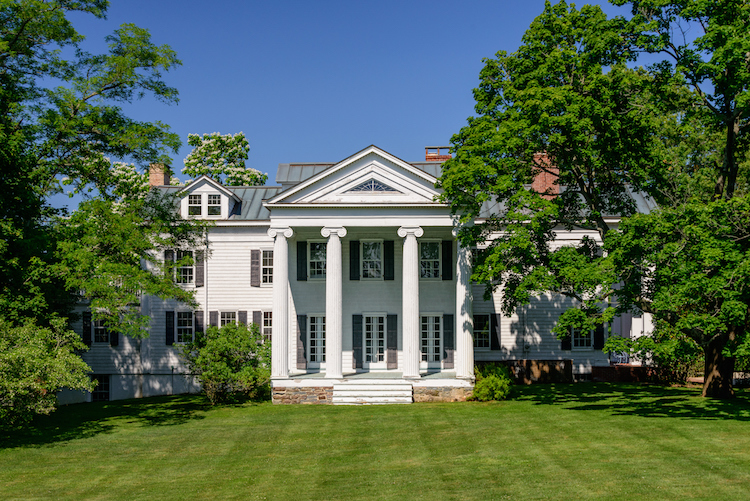 Christie Brinkley has not just one historic estate on the market, but two, bringing her contribution to the Hamptons real estate market close to $50 million. Her North Haven property is a three-story colonial mansion overlooking the open harbor. Almost every room offers the opportunity to gaze at glistening water views and soak up breathtaking sunsets. The home has grand pillars flanking two facade points of the house, wide-plank old pine floors and oak bannisters. Additional amenities include a gunite pool and the bay just steps away for a relaxing kayak ride. 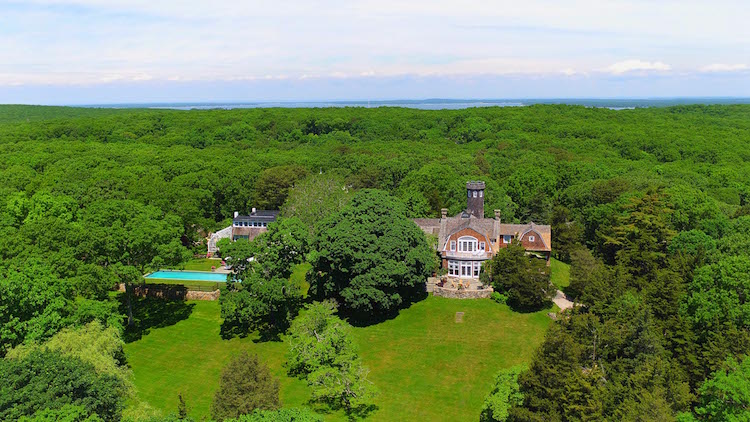 Brinkley’s second home—a family compound, really—is nothing short of exquisite. The property is made up of three separate lots, totaling approximately 20 acres with 11,000-square-feet of living space. The home is appropriately named Tower Hill for its impressive observation tower that climbs 50 feet, surpassing the height of the main house. The family estate was the vision of local nobility, Dr. John Gardiner whose family has deep-seated roots in the Hamptons for the past 360 years. The house underwent a facelift, but Brinkley was mindful to preserve its character. Sitting 200 feet above sea level and resting on a base of 475 tons of local rock, the main house includes 5 bedrooms, 5 baths, an oversized country kitchen, stone terraces and 3 fireplaces. 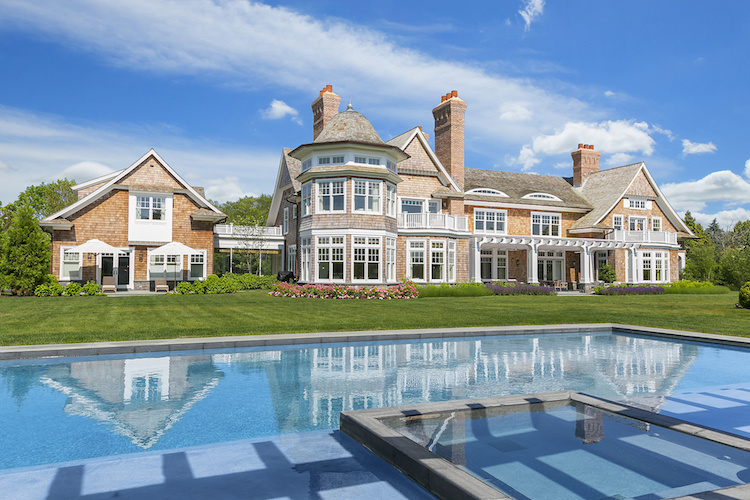 Anthony Sbarro, son of the founders of the Sbarro pizza empire, just sold his custom built Southampton village home and he didn’t even get to live in it. Smitten by a waterfront property in Southampton, he decided to list the nine-bedroom house upon completing its extravagant custom furnishings designed by Italian architect/designer Achille Salvagni. Dough was clearly no object for this pizza heir. The home is equipped with a private theater, elevator, dance studio, gym, sauna and a guest apartment with two bedroom suites. There’s immaculately manicured landscaping, a heated infinity pool accompanied with a pool house and a tennis court. 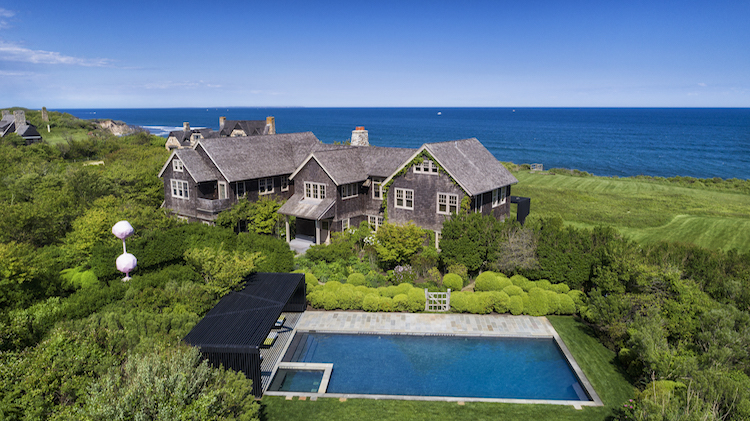 Just a few doors down from one of Montauk’s iconic compounds once owned by Andy Warhol, this windswept property sits atop Montauk bluffs and offers secluded coastal living at its finest. Art Collector and New York City gallerist Adam Lindemann traded in this sprawling three-acre waterfront property for the former Warhol estate. This six-bedroom home epitomizes what it means to live lavishly on the tip of Long Island while still rendering an authentic sense of retreat Montauk is known for, and still is, despite its evolution. The interior is reminiscent of a vintage sail ship, enveloped in crisp, pristine wood finishings throughout. The grounds allow you to extend your relaxation outdoors with a pool flanked by a pergola and a vast lawn that meets breathtaking ocean views traveling all the way to Montauk’s landmark lighthouse.

All listings courtesy of Douglas Elliman