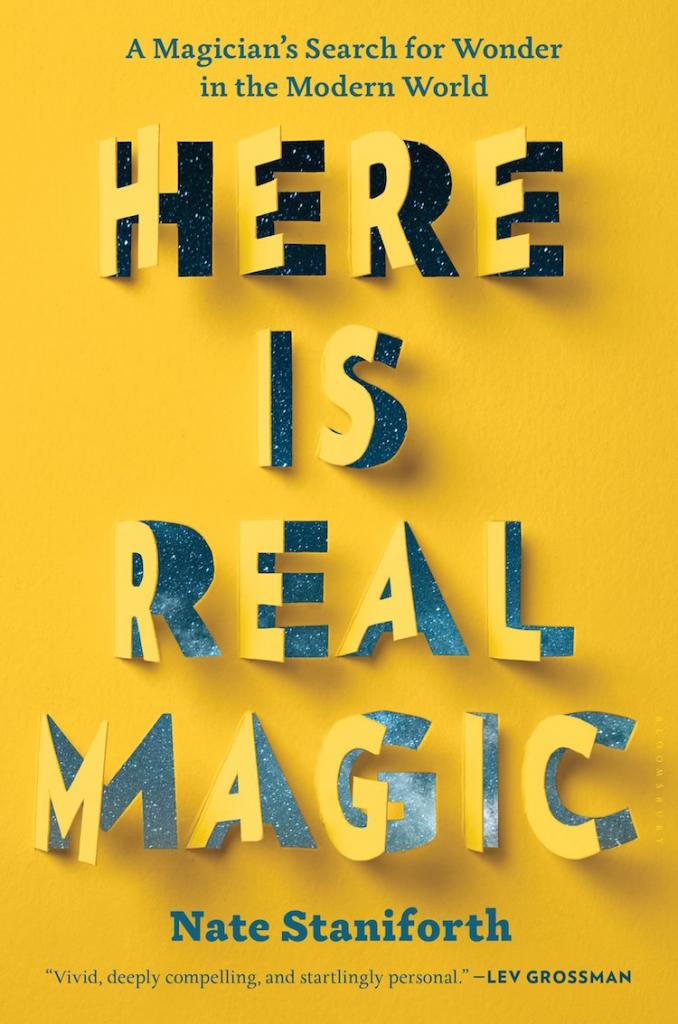 Wow. Just wow. Did you see that? Wasn’t it awesome? It was a once-in-a-lifetime sight and you almost missed it; now, you’ll never forget it. You just don’t have many moments like that anymore, and in “Here is Real Magic” by Nate Staniforth, that’s a wonder.

All Nate Staniforth ever wanted was to be a magician. As he remembers, much of his Iowa boyhood was spent at the Ames Public Library, reading books about magic before going home to work on a vanishing coin trick. He’d stand in the bathroom of his family’s home, watching himself in the mirror as he dropped the coin over and over until his mother kicked him out of the bathroom—until he stopped dropping the coin and finally made it disappear.

All he ever wanted was to be a magician, and so when he graduated from college, he moved to Los Angeles in search of fame and fortune. Just before he ran out of money, he received a call from an agent who offered Staniforth a slot on a college tour. It was a toe in the door.

And it sounded like a dream come true. Every night was a new opportunity to wow an audience. Every show was a chance to enhance the magic that Staniforth was creating, but there was no glamour: he criss-crossed the country on airplanes and adrenaline, rarely remembering which city he was in because they all looked alike. He missed his wife. It was a recipe for burn-out, which happened in Wisconsin after years of touring.

But bills needed paying and magic was money, or, at least enough to make ends meet. Staniforth didn’t know if he wanted to be a magician anymore, but he couldn’t think of anything else and so, because he wanted to find real magic, he headed for India where it was hot—much hotter than an Iowa cornfield. It was dusty, too, and overwhelming and Staniforth wanted to go home. But he stayed. He stayed to see snake charmers, gilded rivers, one-armed monkeys and holy sites. And he stayed long enough to hear a truth his soul needed to hear.

Wow. And to think that I thought this was just some run-of-the-mill old memoir. Nope, it’s much more than that. With a beautiful bit of literary Hocus Pocus, author Nate Staniforth lets readers watch the birth of a magician, right from the beginning. That’s a familiar story to anyone who’s practiced nonstop to follow a dream. Staniforth also shows the drudgery it takes to be successful, beginning with a strange sort of travelogue that’s loaded with exhaustion but that ultimately becomes this story’s reason.

Admittedly, that may sound disheartening, and it is. But, like a good magic trick, you have to wait for the pay-off which, in this case, is so incredibly lovely, a bit humorous, and woven with a plea that readers won’t be able to resist. In the end, Staniforth lets you in on the wonder and for that, “Here is Real Magic” will wow you.