A perfect cocktail is a balancing act—layering precise amounts of spirits, bitters, citrus and modifiers for a harmony that’s a far greater thing than simply liquid in a glass. A little more than two years ago, Copperhill bartender Dave Ebert wasn’t exactly familiar with the concept. “I made this woman a Moscow Mule, she took a sip and said, ‘This is disgusting,’” Ebert recalled from one of his first bartending shifts at the Williston Park eatery. “I was crushed.”

Ebert, who has spent the last 10 years in the restaurant industry (mainly as a server), took it upon himself to elevate Copperhill’s drink list. “I knew where the recipes originally came from when Copperhill opened so I went back to the source and it was not what I was taught. The bartenders that were here before were more pub-style and I was trained a little haphazardly. I thought, ‘How did we end up here?’ We have this great food program and our bar program should mimic it.” Chef and owner Greg Kearns agreed and gave Ebert free range to start making changes. “October 2015, I started here and the December 2015 cocktail menu I had put together with all original drink recipes.” 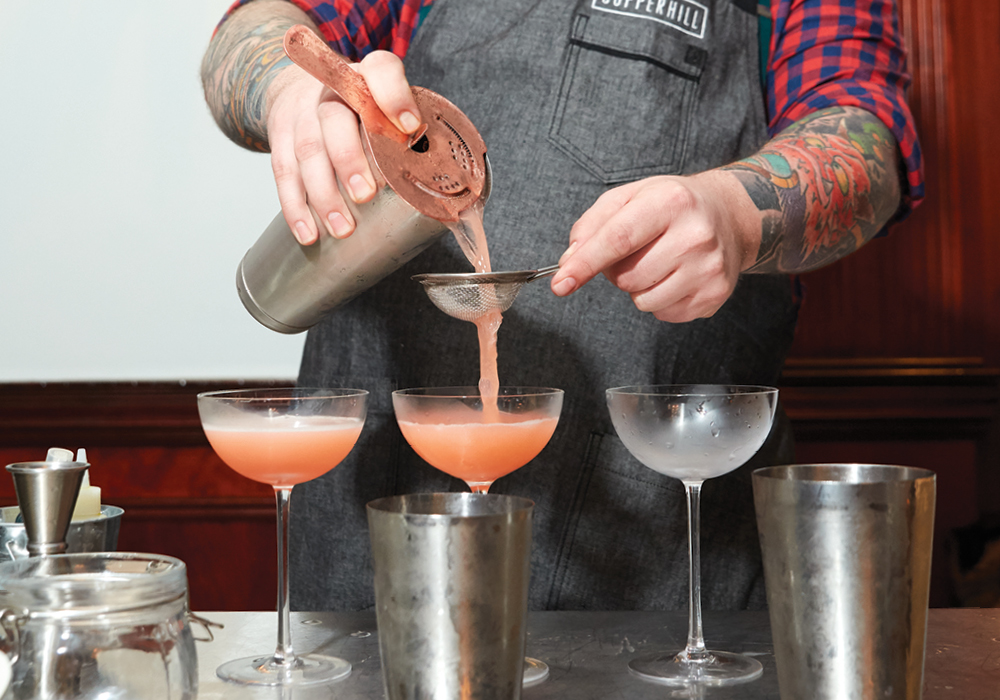 In an interesting twist, Ebert chose not to infuse the Råvo Vodka at the base of the cocktail. “I wanted a blank slate to paint the picture. In a way, I wanted to make it more like a gin-based cocktail so I left the vodka intact and made a very pungent, floral juniper-cardamom syrup that almost needed the vodka to tamper it down.” Now a master of the balancing act, he reached for Campari and lemon to incorporate acidity into the mix. The drink was shaken, not stirred. “I almost wanted to make it like a Negroni—something shaken, light and fun. If it’s shaken, you introduce a lot of air to get that citrus out and give it a light texture on your tongue.”

The drink is finished with three drops of high-quality olive oil (Ebert found his in the Copperhill kitchen) and a sprig of rosemary, which he lit on fire at Island Tasting to unleash the spice’s complexities. “The olive oil, which separates a little from the drink, makes it pop and gives it nice texture. And aromas played a huge part. There’s a couple of tricks to bartending and, of course, the liquid has to be good, but a lot of it is the experience of, ‘What do I taste? What do I smell? What do I feel?’”

The Bitter Truth resulted in a sweet ending. The Cocktail Rumble was not only Ebert’s victory—coming at his first cocktail competition—it was a benchmark accomplishment made better by the high caliber of his competitors: Doug Brickel of Cork & Kerry and Thomas Crawford of The Brixton. “Doug operates the only cocktail bar on Long Island. He was the first to do a cocktail-focused bar and he’s a trendsetter. The Brixton has a really great bar program as well. I was surprised I made it that far. Even just being voted into the Top 12 was all the recognition I ever needed.”

Ebert has joined the ranks of industry vets like Brickel and Crawford, who are working to revolutionize the cocktail culture on the Island as a whole. “We’re so close to the cocktail mecca of the world in New York City, but the cocktail culture on Long Island seems to be lagging. It’s a culture of, ‘I want ice cold vodka in a glass with olives.’ People like myself, Doug and Tom are trying to change that one drink at a time—trying to break people away from their Tito’s and soda and try something new.”