Delectable, protein-laden dishes barely Instagram-able through clouds of fragrant steam, deep flavors that awaken both the taste buds and the blood with excitement and nourishment, entrées meant to be consumed in big bites and without abandon…The glory of cold weather food is viscerally satisfying in complex texture and umami taste. Such are the recipes we’ve culled for victorious winter eating—comfort foods taken to the next level of primal indulgence. Dig in. 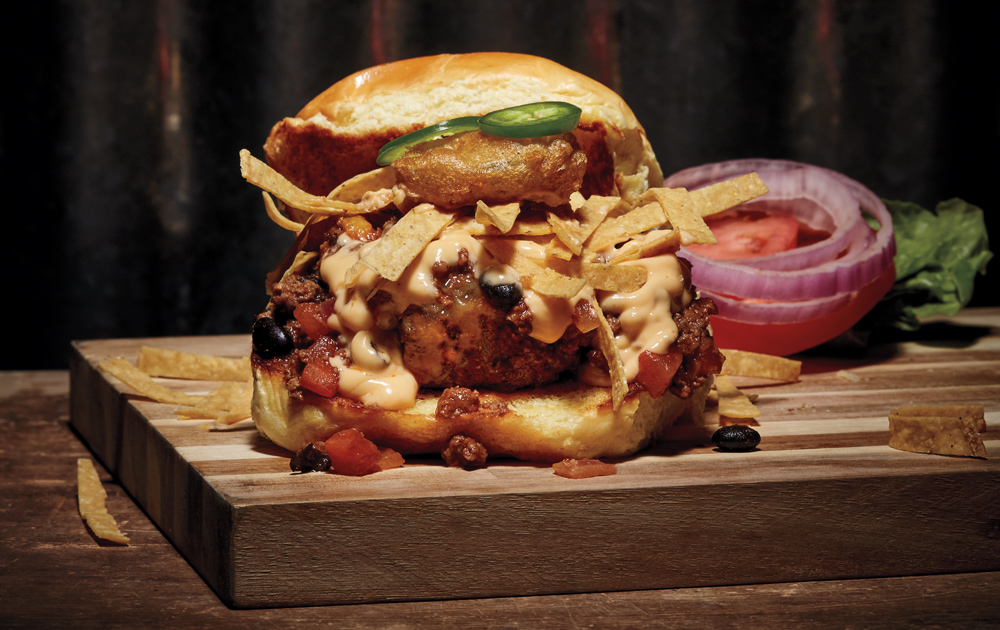 When “burger” is in the name and the restaurant’s parent company has built its reputation on beef-forward offerings, there’s really no question about what you should be eating there. But we all know that doesn’t necessarily mean it’s the only thing worth busting your belt for—and when you can’t decide between nachos or a burger, have both! That’s the thinking behind GM’s signature Saturday night burger, a “knife-and-fork and maybe a few extra napkins” kind of sandwich, chuckled George Martin Group’s executive chef Frank Greco. “This burger is a whimsically composed burger, created to bring together these comforting taste experiences. I just thought it would be fun to build all the flavors by layering them over one of our signature burgers.” Click for recipe 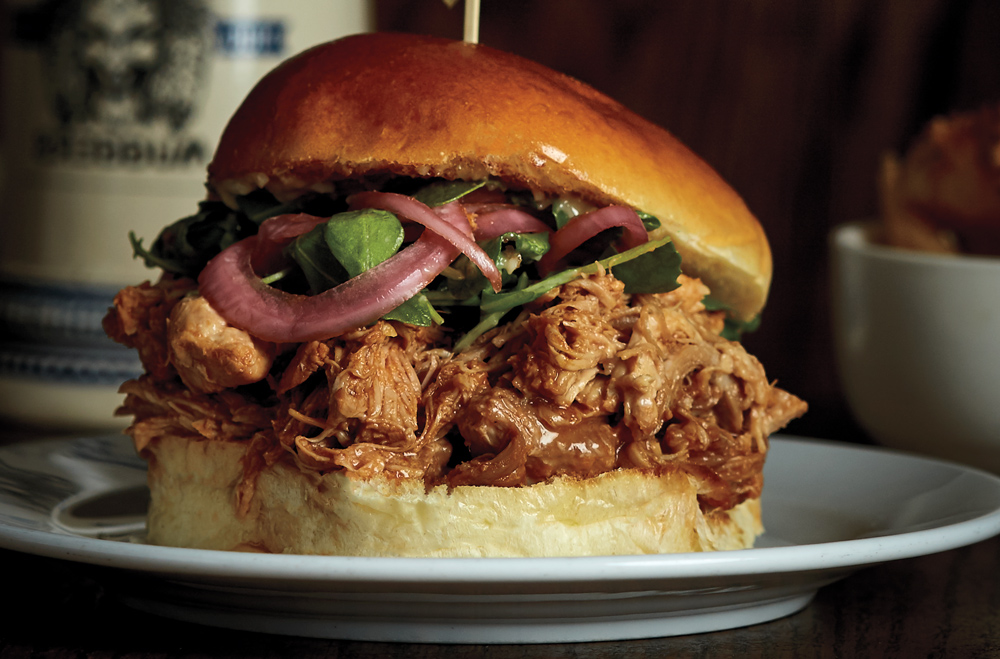 Sous chef Charles Query, a native of Charlotte, one of the country’s main hubs for authentic Southern barbecue, knows his way around meat—both red and white. One of the most popular renditions of the latter is this gorgeous sandwich, one that shines among the wide selection of English-pub-meets-French-bistro “dressed up” favorites. But don’t be fooled by the name of the venue. Despite it taking its moniker from a turn of the 19th century boarding house frequented by artists visiting East Hampton, the food is anything but rowdy. The menu is overseen by the restaurant group’s Joseph Realmuto, the man also behind the lauded Nick & Toni’s, Townline BBQ and La Fondita, taking its cue from seasonal availability and innovative insights of talented team members like Query. Click for recipe 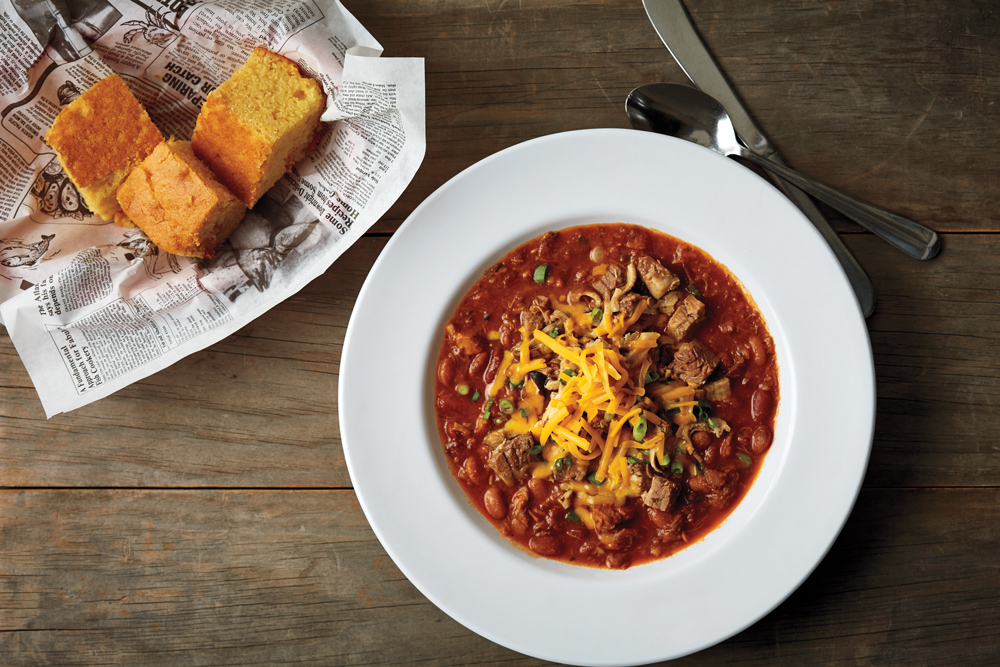 Move over ground beef—brisket and chicken are teaming up for a different spin on a wintery classic. And you know it’s going to be good when it’s as down-home as this cash-only, silver trailer diner. With gator and andouille sausage on the menu, muffulettas and po’ boys headlining their sandwiches, and all meats smoked in-house, its Louisiana slant is credible. “The southern influence was the brainchild of a great friend of mine who lived in Louisiana for many years and fell in love with the cuisine and culture,” shared owner Joan Gallo. And the magician in the kitchen, chef Ignacio Castillo, builds on that to create inspired recipes like the beef brisket and pulled chicken chili. “What makes the difference in ours is the use of the holy trinity: bell pepper, onion and celery. Smoked meats also add a new dimension of flavor,” Gallo said proudly. Click for recipe 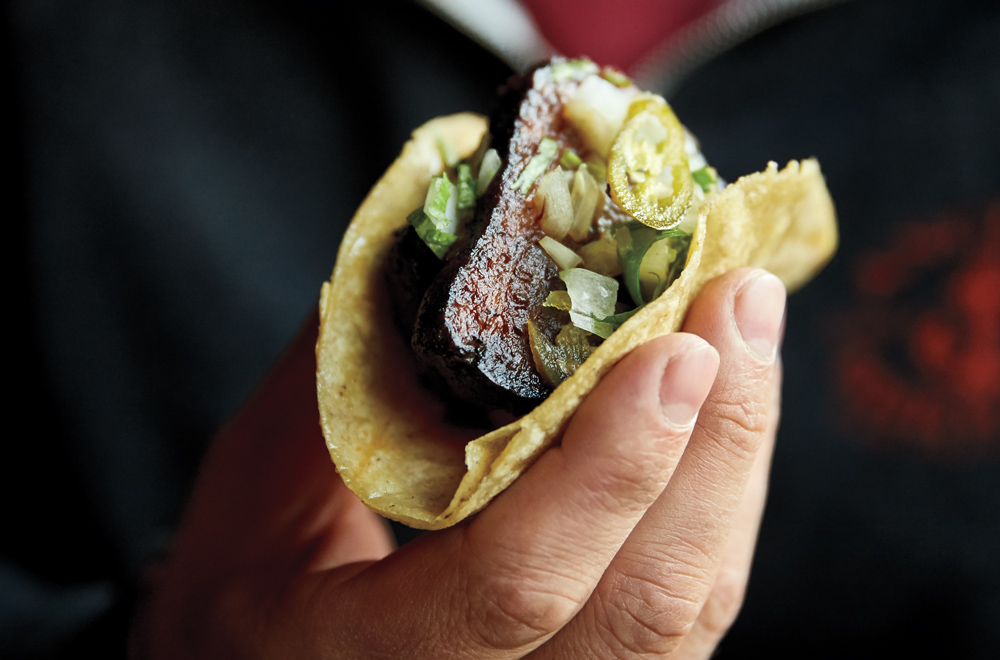 At Anthony Tartaglia’s popular central and western Mexican-influenced restaurant, it’s saying something when one taco in particular shines since all his authentic renditions are worth sinking your teeth into. Wrapped in fresh-pressed tortillas made with freshly ground masa and often garnished with herbs and peppers direct from their greenhouse dining room, it’s the variety of what’s available that makes them perfect for sharing (if you’re feeling generous).

But really, the standout volume and flavor of the Barbacoa tacos is what makes them a winner in our book. “We use a grass-fed brisket so the product we begin with is already next-level,” explained Zachary Rude, the restaurant’s executive chef and Targalia’s business partner. “Then we recreate the primal quality of the tradition of roasting whole animals over an open fire or buried in the ground under coals,” he continued, using modern-day techniques that simulate the complexity of those flavors, like a deep char and his secret ingredient: cola in the braise. “Not only does it add sweetness, but the phosphates in the soda help make it soft and tender.” Click for recipe 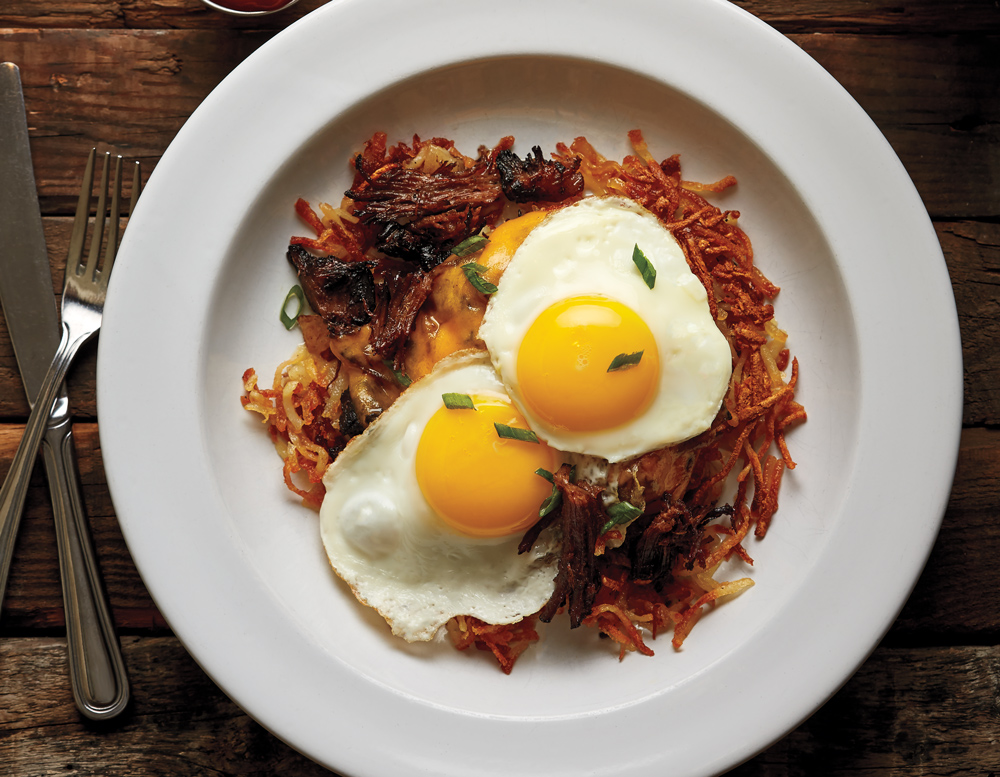 When breakfast lasts all day, it really is the most important meal. image: stuart goldenberg

Mornings can be sweet, especially at Stephen Cardello’s flagship, where on-the-bone bacon comes glazed with maple syrup, French toast and cinnamon buns combine into one beautiful creation and pancakes are made light as a cloud with from-scratch ricotta batter and fresh berries. But on mornings like these, you don’t want to be coaxed awake, you want to be hit in the face with savory flavor, which is exactly what the popular pot roast hash does. However, it’s a daunting endeavor to go the whole nine, so “I’ve adapted this recipe for the home kitchen,” Cardello confided, “for more immediate gratification and ease of preparation.” Caution: the prep time might make this a better breakfast for lunch (or dinner) than a morning joe accompaniment. Click for recipe