Automobiles come in all shapes and sizes, but one marque has fueled fantasies with futuristic designs for more than 50 years. Their cars come from Sant’Agata Bolognese, a small Italian town less than an hour from Bologna and in the same “Supercar Valley” where Ferrari and Maserati create fantasies of their own. Here, Lamborghini has consistently built automobiles to spark the imaginations of little boys, superheroes and connoisseurs of the exotic—ever since Ferruccio Lamborghini unveiled his prototype 350 GTV in October 1963.

Related Content: The Phantom VIII is the Only Way to Fly

Lamborghini was an upstart from the beginning. No other marque has translated so many groundbreaking and influential concepts into production-car reality. Instrumental in the realization of this vision was an early collaboration with Nuccio Bertone, whose carrozzeria was looking for a performance marque to clothe with the creations of their brilliant car designer Marcello Gandini (his Miura spawned a mid-engine dynasty). But it was the Countach—Gandini’s styling concept first shown at the 1971 Geneva Motor Show—that put more Lamborghini posters on walls than any car before or since. The Countach started a supercar revolution, underpinning its power and performance with flamboyant style that evolved through the 90s with the wicked Diablo, followed by the radical Murciélago in 2001. Today’s sinister iteration has seen constant refinement since its premiere in 2011, launching the state-of-the-art even further into orbit. 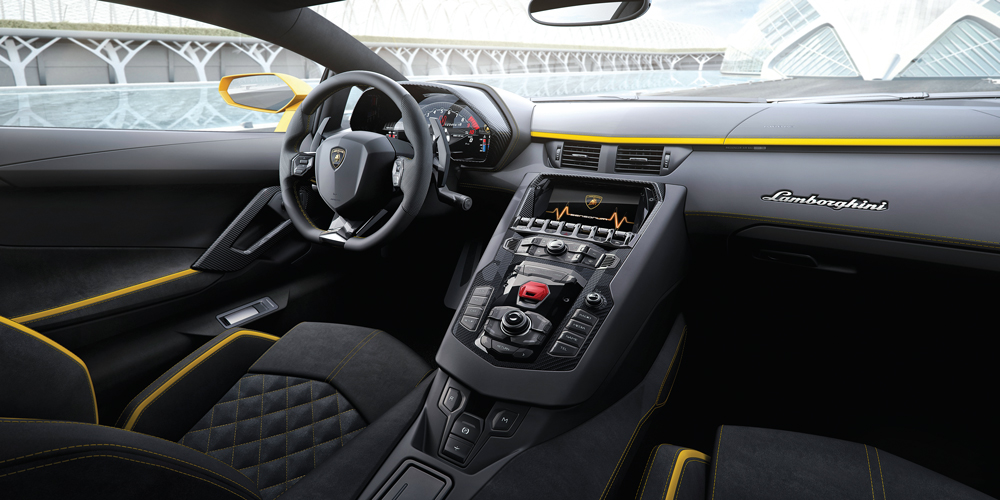 At the literal core of every Aventador is a lightweight carbon-fiber monocoque chassis that encloses driver and passenger. Its body showcases  innovation in the field of composite technology—a dedicated team accomplishes the labor-intensive fabrication in a special facility within the factory. After the carbon-fiber “cage” cooks in a giant autoclave, aluminum subframes are mated to either end and the entire structure is wrapped with body panels fabricated of composites and aluminum. Engineers have managed to trim all of the fat off their big bull. The Aventador S Coupé is down to a fighting weight of 3,465 pounds while adding muscle where it counts.

Devotees ascribe to the notion that you can never have too much of a good thing. Those familiar with the original will quickly discover that The S belts out 40 more horsepower from its 6.5-liter V12 engine—12 of the most impressive cylinders in any car today. The massive mill generates ungodly thrust with a stentorian bellow as loud as the foundry that forged its block. That sound comes from a naturally aspirated intake (not muffled by turbo) and is expressed by an exhaust system that exits center rear through three single pipes. Its sound is monumental, like the fourth movement of Beethoven’s “Symphony No. 9 in D Minor” or Bach’s “Mass in B Minor” performed at full song—only louder. Paddles of the seven-speed transmission are the conductor’s baton; shifting anywhere close to the 8,500 rpm redline unleashes a swelling tsunami of sound. Rev-matched downshifts are just as exciting and notching it down a gear offers one more excuse to run it up again. Addiction comes easy. 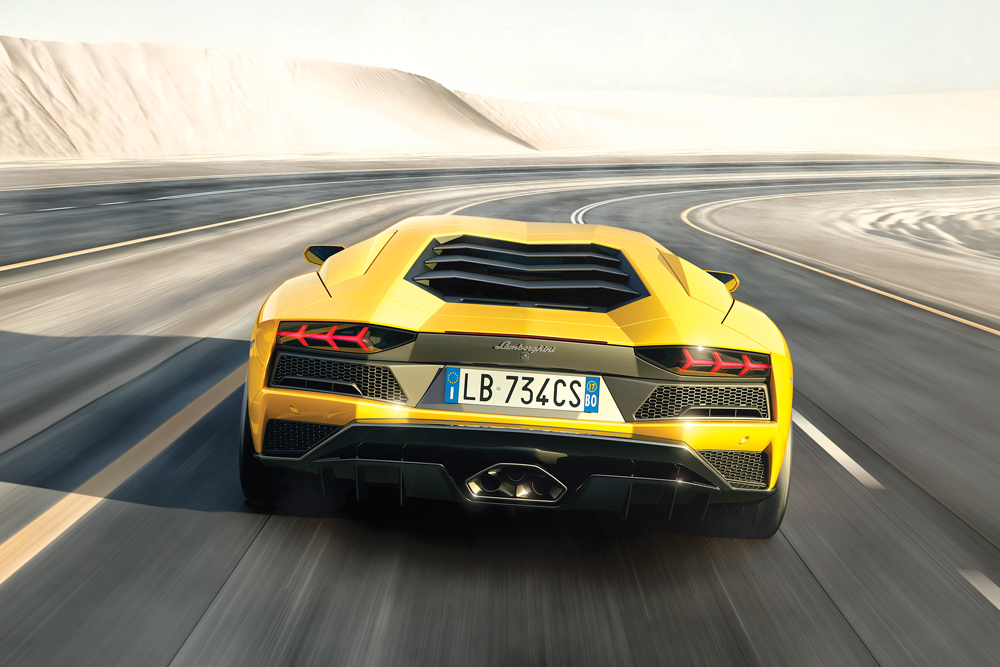 The next generation of V12 Lamborghini boasts significantly enhanced electronics and customizable driving modes that make for its own theme music.

This model is more tractable and user friendly than its predecessor too. The original was a big brute and a host of far-from-subtle improvements bring welcome refinement and finesse to the driving equation. It begins with enhanced aerodynamics expressed by angry angles and sharp creases that allow the Aventador S to slice through the air. The front end has a more aggressive nose and a longer front splitter that increases downforce and improves engine cooling. A new diffuser is at the rear and a new articulating wing reduces drag significantly: up to 400 percent in low drag mode. Permanent four-wheel drive and greater aerodynamic efficiency that increases downforce combine to provide astounding traction and grip on a variety of surfaces, wet or dry. The active pushrod suspension—straight out of Formula 1—has been revised to deliver more nuanced feedback and responsive handling while smoothing its predecessor’s nervous edge. Bonus: it’s far more pleasant to drive on real-world roads. 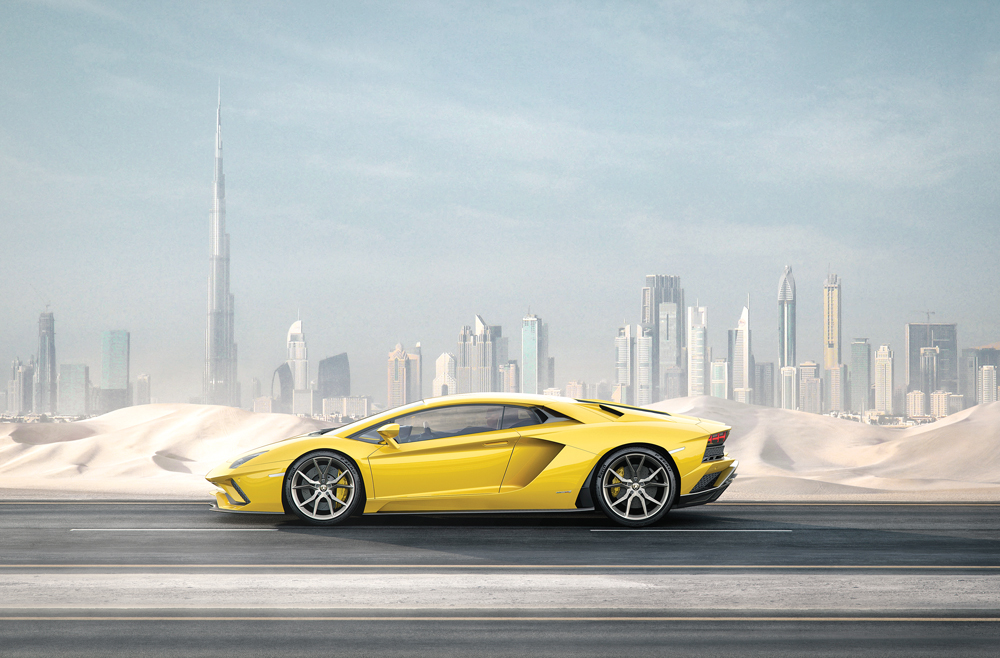 Think of the Aventador S as having a “volume control” that dials its personality up or down, with four driving modes that affect traction, steering and suspension. They are: Strada (comfort), Sport and Corsa (track) and Ego, which customizes and combines set-up profiles to the driver’s preference. Whatever the mode, once behind the wheel and on the open road, drivers will find that the Aventador S sparks a huge rush of adrenaline. Fun and luxury are taken seriously and in equal parts.

Lamborghini’s Ad Personam customization program lets owners make an already special car still more special. Exterior and interior options are limited only by the imagination—and the DOT. Raising the long scissor doors, one quickly learns to negotiate ingress with a gentle “roll in” over the broad sills. Ensconced in the deep sport seats, the driver can make adjustments to the compact steering wheel. The new TFT dashboard allows for a customizable instrument display, which automatically changes with driving modes. An optional telemetry system records lap times for track duty. But we suspect most owners will be spooling up the miles in curvy canyons, on scenic drives and long-distance highways that take advantage of the immense power of Lamborghini’s big GT.

While credentials like these come at a cost (MSRP is $421,350), the value delivered is substantial. The payoff is a sophisticated supercar that’s as exhilarating to drive as it is to look at.