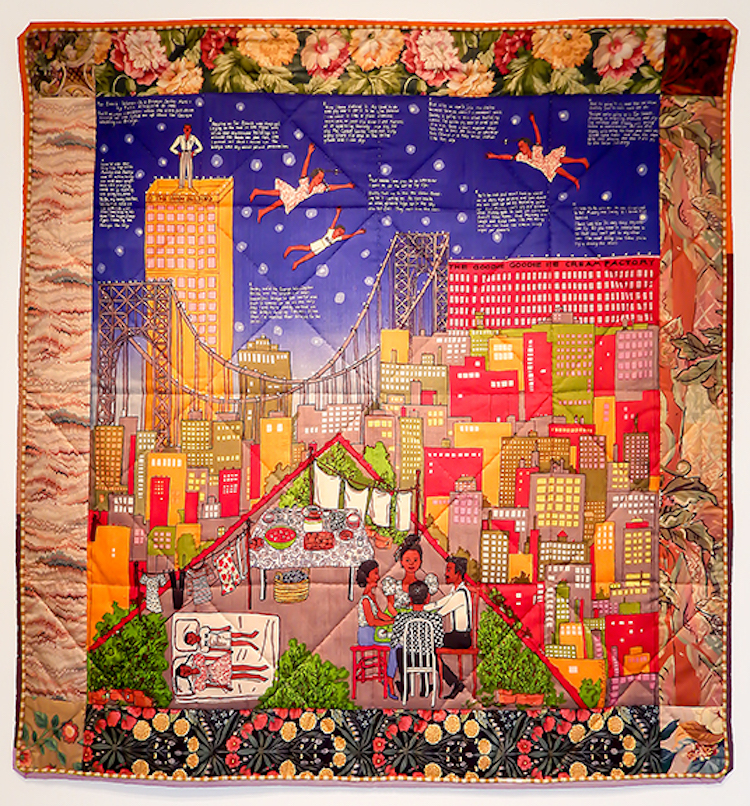 Faith Ringgold’s, “Tar Beach #2,” a 1990-92 silkscreen on silk, on loan from ACA Gallery is a highlight of the Patchogue Arts Council’s “Varieties of Experience.” image: adel gorgy

There’s a version in the Philadelphia Museum of Art, and its sister, “Tar Beach #1,” is in the permanent collection of the Guggenheim. Through Feb. 25, to celebrate Black History Month, Faith Ringgold’s “Tar Beach #2” is on view at the Patchogue Arts Council, along with works by 16 other inspiring and important African-American artists in “Varieties of Experience.” The show was organized by John Cino, PAC’s program director and curator, who’s been presenting compelling exhibitions across Long Island for many years. This time, he’s brought over 30 museum-level works to the PAC gallery on Terry Street.

The seed of the exhibition was a visit to the studio of Robert Carter, an accomplished local painter and professor of art, whose multimedia work “Come Back Next Week” is one of the many highlights of the show. A life-sized portrait of a mother and child appears through a screen door in an assemblage that’s equal parts painting and sculpture, nostalgic and timeless. The door has a farmhouse feel, but could exist anywhere. The poignant expressions of the subjects suggest hardships that may reflect a personal history, but are universally recognizable.

“Carter has an enormous collection of art,” Cino said, “and the majority of them were African-American artists. I thought it was an appropriate thing to do a show from the collection of Robert Carter for this period of time. But, as the show evolved I felt like his work wasn’t varied enough for the idea that I wanted to get across which is that African-American artists are affected by racial issues, but it doesn’t mean that everything that they make is in response to race.” While many of the works are from Carter’s collection, Cino reached out to other artists. 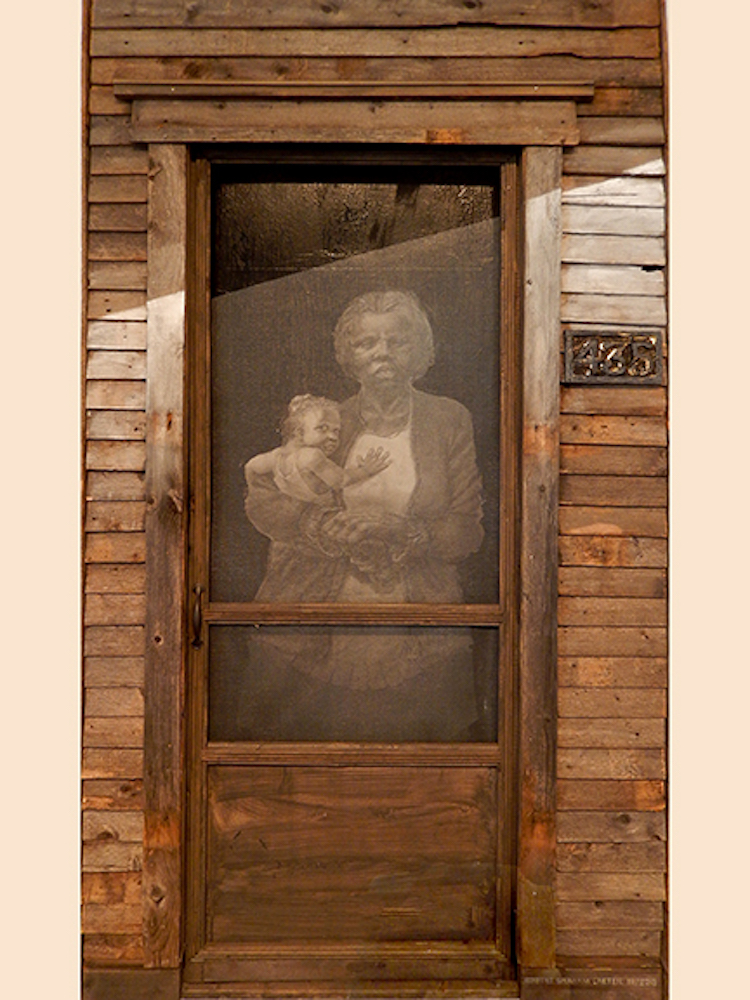 Howardena Pindell’s work is in the collections of several museums, including the Metropolitan Museum of Art, MoMA, The Brooklyn Museum and the National Gallery of Art. As a full professor at Stony Brook University since the 1970s, she’s a beloved Long Island institution in her own right. Her abstract mixed-media collages on paper “Untitled #50” and “Untitled #51” in the show are intricate, delicate, process-intensive and rich with color, pattern and depth. “She’s somebody whose work does not fit the bill of traditional African-American art, or our idea of it. It’s non-objective. It’s tactile,” Cino explained. “Yet much of her process has evolved from ideas of creating that come from Africa. That idea of building up with little bits of detritus is something that is common in African art.”

James Denmark’s 1970 sculpture, “Mask,” is a three-dimensional composition of cut wooden angles and curves, flat surfaces and jutting nails, all painted matte black. “I see it as derivative of Cubism which is derivative of African art,” Cino said. “African-American artists don’t necessarily only make what would appear to be African-American. That’s the point I wanted to make. There are very different experiences in being a member of a minority race. It’s not homogenous.”

A younger artist included in the exhibition is Dewayne Wrencher, a recent MFA graduate from Stony Brook. “Hair Theory VI,” Cino said, “is the culmination of a series of pieces he made in which, as an experiment, he changed his look by adjusting his hair to different styles African-American people use…He made a single relief print from each one of those. This is the amalgamation of all of them.” The effect is a complicated almost group portrait from which a single, seemingly perplexed subject looks out. 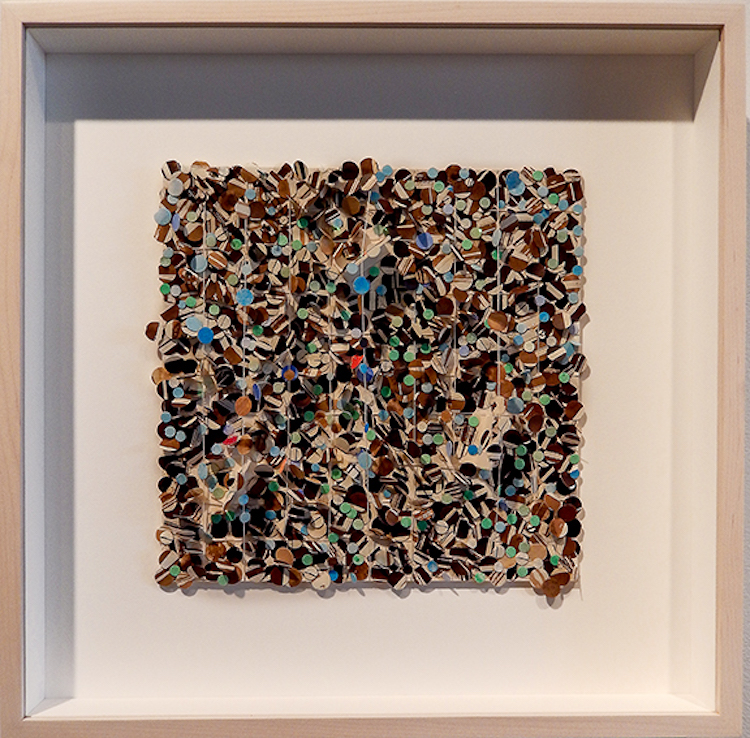 Faith Ringgold’s “Tar Beach #2” hangs at the rear of the gallery. Filling a wall with vivid color, whimsy, history and hope, it tells one story and carries many others. Through words and images printed on fabric, the viewer encounters Cassie Louise Lightfoot, a young girl growing up in Harlem, whose dreams, faith and love enable her to fly free of all that might constrain her. “When I was offered from the ACA galleries the opportunity to exhibit ‘Tar Beach,’ I started to cry,” said Cino. “It’s such a big part of my family. I remember reading it to my children.” Ringgold’s text and images were also published as a Caldecott Award-winning book.

Ringgold is known for her story quilts. They connect her work to a tradition of women’s communal work like quilting bees, to her own mother who was a New York garment worker, and to her great-great-great grandmother, a slave who made quilts for the plantation on which she lived. Ringgold’s work suggests that creativity is key to triumphing. “All you need is somewhere to go that you can’t get to any other way,” is written on the quilt. “The next thing you know, you’re flying among the stars.”

Cino embraces and honors Black History Month, but also offers the idea that no single moment or month can begin to approach the achievement, experiences, voices and visions of African-American artists. “Varieties of Experience” proves the point through the work of 17 women and men who communicate complex histories, personal experiences and universal truths through powerful, varied, thoughtful and eloquent works.