A new year, a new diet. The cycle can be vicious. But weight loss diets aren’t anything new. Remember William Banting? The Englishman famously released “Letter on Corpulence” in the late 1800s detailing the low-carb diet that helped him shed dozens of pounds. It became so popular the word “banting” was used to refer to dieting. In recent times, Americans have been acquainted with fad diets like Atkins, South Beach and Ketogenic that promise quick results without much focus on exercise. The problem is they aren’t a lifelong solution.

“For long-term weight loss you need something that’s healthy and can be sustainable,” said Lisa Stollman, a registered dietitian nutritionist based in Huntington. “If you’re not going to find a diet that you can stay on for a lifetime, you’re just going to lose weight and then gain weight.”

But the issues go further than an inability to keep weight off. Restrictive eating—the common denominator in fad diets—can trigger other severe disorders like binge eating and even depression. Society’s more recent obsession with “clean eating” (eating foods that are minimally processed, refined and handled) can sometimes be just as destructive. 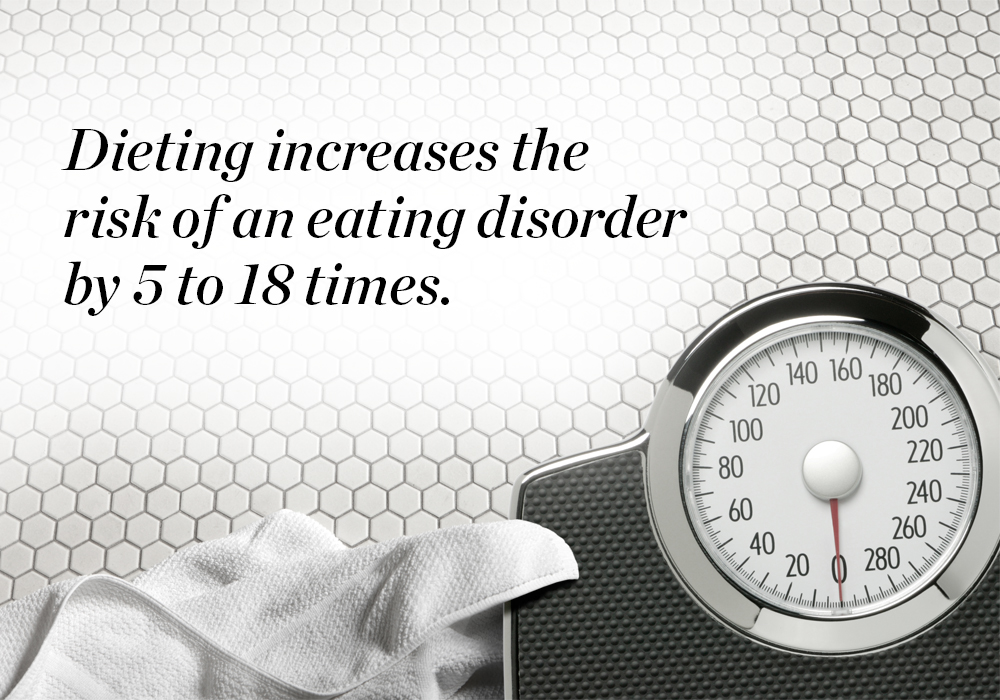 The psychological consequences of dieting have been studied for decades. A 2004 article by Paediatrics Child Health explained that dieting increases the risk of an eating disorder by 5 to 18 times. Teenage dieting, it said, is often a cause of anorexia and bulimia nervosa. It’s a bigger concern now more than ever since the number of overweight adolescents has tripled since 1980.

“When you already have some sort of underlying problem with food and then you add a diet on top of that it’s like an extra form of feeling guilty about eating certain things,” said Lisa Moskovitz, a registered dietitian and CEO of the NY Nutrition Group. “That’s the opposite of what we want for this population because they already have a poor, negative view on food and their body. When they try to go on a diet, it exasperates that.”

Misleading “clean eating” trends are adding to the problem. Take gluten for example. Research firm Mintel found that sales of gluten-free products increased by 63 percent from 2012 to 2014. That’s driven by 22 percent of Americans who were following a gluten-free diet in 2014—up 7 percent from 2013. Yet celiac disease, an autoimmune disorder that causes gluten intolerance, affects only 1 percent of Americans. Experts insist there’s little to no evidence that going gluten-free is beneficial otherwise. For instance, a 2017 study in the British Medical Journal found that gluten intake does not increase the risk of heart disease. Avoiding gluten, on the other hand, “may result in reduced consumption of beneficial whole grains, which may affect cardiovascular risk.” 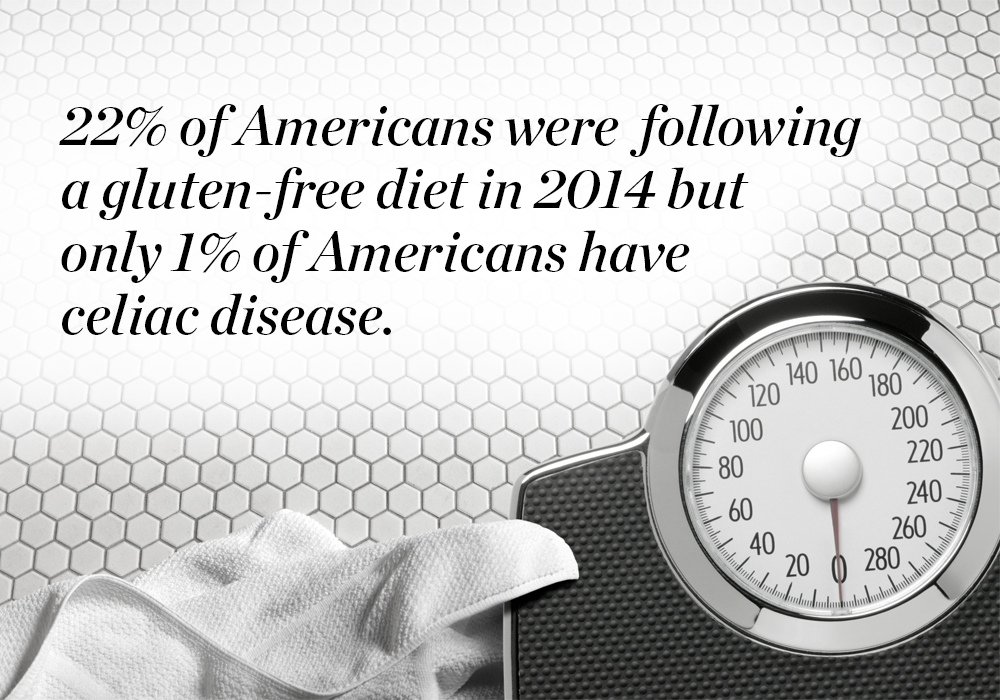 Then there’s orthorexia. The term coined by Dr. Steven Bratman in 1996 describes individuals with a “fixation on righteous eating.” It’s not yet recognized as a clinical diagnosis—many psychiatrists consider it a form of obsessive compulsive disorder or anorexia—but issues with orthorexia can be terrifying nonetheless.

Jordan Younger, a blogger with more than 150,000 followers on Instagram, spoke about her struggle with orthorexia in a 2014 blog post titled “Why I’m Transitioning Away From Veganism.” Younger, who released the memoir “Breaking Vegan” in 2015, explained that she’d stopped enjoying food, became fearful of eating out at restaurants and was obsessed with juice cleanses. She recalled a time she went to buy smoothies with friends and had a meltdown when the store didn’t have the one she wanted. “I stared at the juices and smoothies and raw food for a good 15 minutes, panicking, because I had no idea how I was going to navigate this setback,” she wrote. After discovering her symptoms fit the description of orthorexia, Younger sought help from a nutritionist and therapist. She cut the vegan label and began incorporating more food into her diet, including cage-free eggs and chicken. Her fear of food began to decrease, she had more energy and felt happier overall.

Moskovitz, who has been in private practice for about 10 years, has noticed a trend of people who fear eating sugar, anything processed or having too much salt. But being obsessed with healthy eating is much different than being a healthy eater. “A healthy eater is someone who can eat healthy and balanced 80 percent of the time and doesn’t worry or stress or feel guilty if they have a hamburger or candy once in a while,” she said. “They can easily bounce back and not let it completely interfere with their mood.” 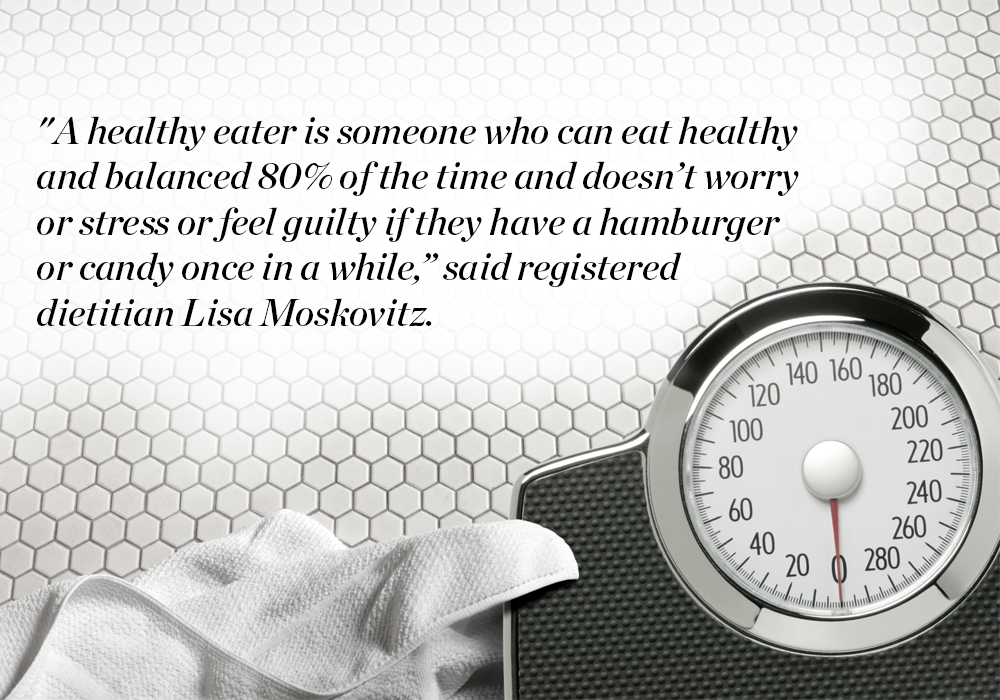 Mood is another aspect worth paying attention to. A study published by Canadian Center of Science and Education found that “possible failed attempts to quickly lose weight can lead to depression and yo-yo dieting.” Dr. Oksana Davydov, an endocrinologist at NYU Langone at Great Neck Medical, agreed. She said that fad diets might be popular because “in the short-term, people are definitely ecstatic and feel better about all realms of their life when they lose weight.” But she pointed out that the inability to maintain the weight loss after a fad diet can enhance feelings of disappointment and depression.

That can also be understood from a 2014 study published by PLOS One which followed about 2,000 overweight or obese adults in the U.K. over a period of 4 years. It concluded that participants who lost 5 percent or more of their original body weight improved their physical health by lowering blood pressure and serum triglycerides. But the same individuals had a 52 percent greater chance of a depressed mood than those who stayed within 5 percent of their original weight. “Resisting the ever-present temptations of unhealthy food in modern society takes a mental toll, as it requires considerable willpower and may involve missing out on some enjoyable activities,” said the study’s lead author Dr. Sarah Jackson.

It’s not to say that all diets are bad. U.S. News and Reports published its annual report of the year’s best diets placing DASH and Mediterranean at the top. These focus on incorporating more fruits, vegetables and whole grains into the diet without completely eliminating other foods. “The reason they are better is they’re a lifestyle that you can actually maintain,” said Dr. Davydov. And that long-term focus without unrealistic restriction is the key to a successful diet.