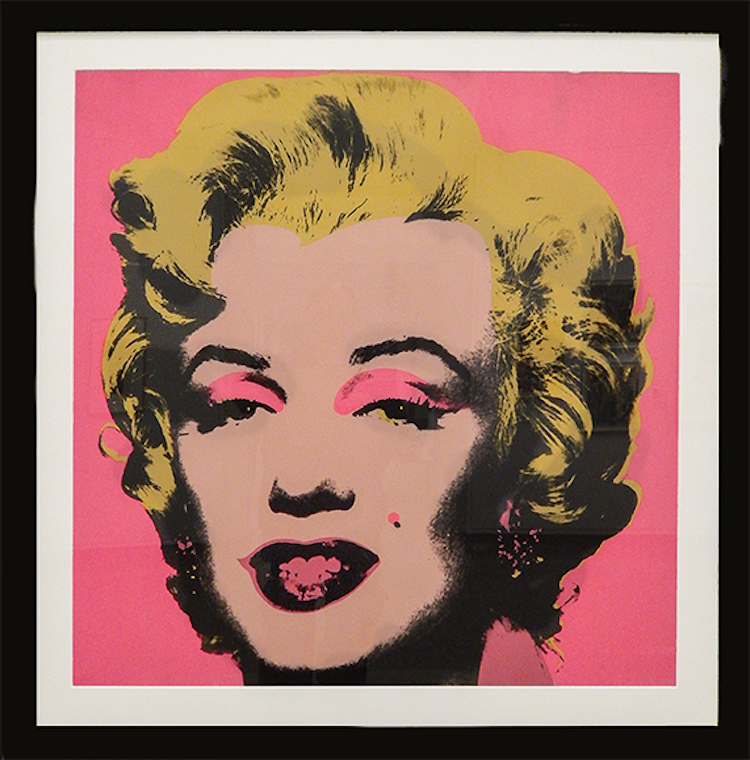 Nothing seems to scream the 1960s more than a big, bright pink pop of Marilyn Monroe via Andy Warhol. That’s what greets visitors to the Heckscher Museum’s current exhibition, “From Frankenthaler to Warhol: Art of the ’60s and ’70s” on view through March 11. The 1967 screenprint is from a series of images, each distinctively colored and monumental in size, that the artist did of the movie star. With this portrait, Warhol changed the face of art. He brought consumer culture, glamour and fame off of movie and television screens, and onto the walls of museums and galleries. He challenged hierarchies even as he acknowledged the darker side of popular culture. Because of Warhol, we know all about Monroe’s commoditized face and what it signified—sex appeal, status and celebrity—but little about her persona. A kind of reverse Rembrandt.

The art of the 60s and 70s is complex, varied and as individualistic in its approach and meaning as the artists who created it. Some were responding to rapid changes in American life. Some were reacting to seismic political shifts. Some were mining the depths of the soul. But all were tapping into an exciting moment in which change and the new were embraced. “This period was a watershed,” said curator, Lisa Chalif. “America changed so dramatically and so quickly.”

That held true in politics, culture, music and art. Chalif draws attention to two distinct trends in the visual arts: artists who voiced their thoughts and interests through abstraction, and those who utilized and created new forms of realism. Articulated through vocabularies of Pop, Photorealism, Minimalism and Expressionism, in works of collage, sculpture, painting and printmaking, the artists in the show invite us to reflect on a moment and see how it resonates today. 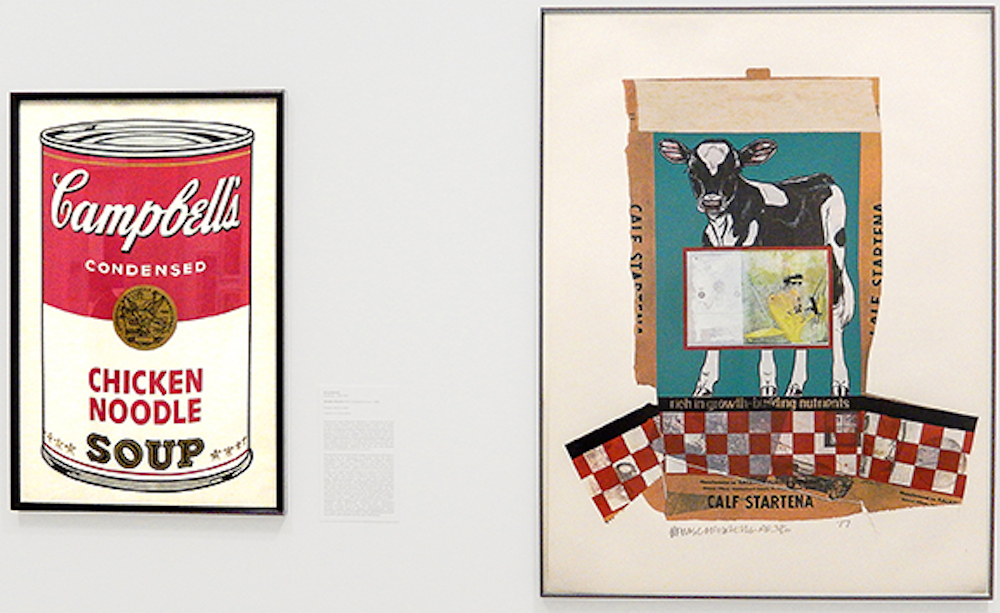 The exhibition presents both canonical artists like Jasper Johns, Robert Rauschenberg, Romare Bearden, Andy Warhol and Helen Frankenthaler, and some who might not be as well known, like Lillian Dodson. Roy Lichtenstein’s “Seascape I” in the first gallery is a combination of visual and material wizardry, conceptualism and wit. His flat blue Ben-Day dots, common in comic books, fill an abstract ocean and play against a lenticular-sheet sky that mimics rounded clouds. It’s art made from artifice. It’s also the perfect example of one of the themes. “It’s an era that was characterized by artists pushing boundaries and investigating materials, and different content like everyday, mundane objects like soup cans. They’re all investigating something new,” Chalif said.

On one wall, the theme of food gave Chalif the opportunity to contrast the whimsy and humor of Claes Oldenburg. You’ll see his colorful lithograph “Flying Pizza” with the deadpan commentary of Warhol’s “Chicken Noodle” from his series of Campbell’s Soup cans. They lead to the complexity of Rauschenberg’s “Calf Startena,” a lithograph that utilizes appropriation of familiar symbols, like the red and white checkerboard Ralston Purina logo (the image and the work’s title refer to bags of animal feed). Rauschenberg cuts the bag up, flattens it out and superimposes painted and collaged elements—images of clocks and cars, stamps and scientific diagrams—over the innocent gaze of the baby calf. It captures a sense of bewilderment many people experienced at the lightning-fast changes in the world. 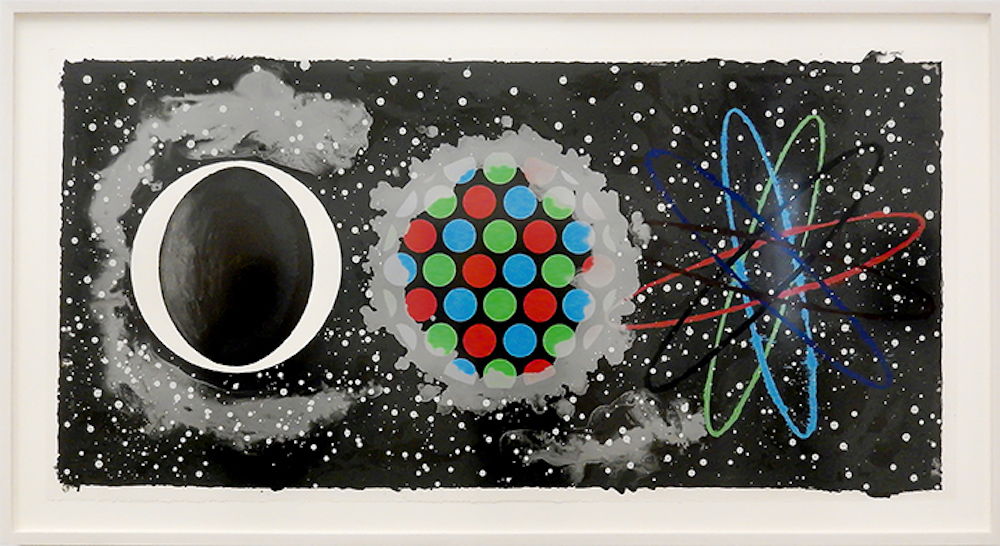 James Rosenquist’s “Coin Noir” a complex composition of meaning and imagery is one of the highlights of the show. (Gift of Susan and Jay Zises) image: adel gorgy

The race to space, splitting the atom and the universe within are echoed in “Coin Noir,” a show-stopping lithograph by James Rosenquist. Coin Noir, or “dark corner,” is the French term for black holes and astronomical concepts that had just been theorized in the 1960s, though not yet proven. The work comprises a series of three circular shapes, each of which contains additional circles. Visual references to the moon, the stars, the atom, the eye, the Zen concept of the void, along with an abstract form filled with red, blue and green dots (like the ones that appeared on early television screens when seen up-close) all hover against a black background speckled with white, creating a universe of possible readings.  Rosenquist riffs on scientific discoveries, timeless eons and everyday experiences in an elegant, contemplative composition that engulfs the microcosm and the macrocosm and connects personal experience to great mysteries.

The exhibition includes several artists with local ties. Andy Warhol, Roy Lichtenstein, Larry Rivers, and Lillian Dodson are among those who lived on the Island. Photorealist pioneer, Audrey Flack, whose “Lady Madonna” touches on both the music and the feminist movement of the time, still lives on Long Island, as does Stan Brodsky, the much-admired Huntington painter and educator. The Photorealists were shepherded into a movement by Louis and Susan Meisel, NY gallerists who live on the East End. Many of the works were given to the museum by prominent Long Island collectors.

Chalif said that, as she prepared the works, even she was surprised by “how expansive the art is.” The post-war period in America was an incubator of ebullience that morphed into a revolution. The Vietnam war, flower children, protests, rock and roll, astronauts, civil rights, the rising importance of television and advertising, feminism and the Cold War is a lot to process. The era of the 60s and 70s, as seen in the Heckscher’s thoughtful and revealing exhibition, is as relevant and riveting as ever.