The last text message you sent:
“Bowling and white Russians this week?”

Favorite thing about working behind the bar:
Building good relationships with guests. Making good drinks is a must, but the community in which they’re made and enjoyed is also important.

Least favorite thing about working behind the bar:
Bartenders are always onstage, so we can’t show we’re stressed out if we’re in the weeds. We gotta stay cool as a cucumber in a bowl full of hot sauce.

Define the perfect cocktail:
Tasty and warming, both on your palate and in a visceral way on your psyche. These are spirits, after all.

Weirdest drink request you’ve ever gotten:
Not mine, but I once overheard a guy order vodka and ketchup.

Describe your cocktail list:
A lot of our ingredients come from within a 20-mile radius or are made in-house. Like our food, no drink is overtly complex. But all are precise, unique and executed well. We always have a negroni with local vermouth, and cosmopolitans with local herbs like lemon verbena, lemongrass or lemon balm.

Favorite drink to mix:
I love making dirty martinis. Guests seem to become entranced by the olives as I’m slowly pouring the viscous vodka or gin over them. It’s a great moment of intimacy.

If you were a cocktail, your name would be:
The Unbearable Lightness of Being a Cocktail.

The best piece of bartending advice you’ve ever received:
That amiability is equal to drink-making skills. Another bartender once told me that bartending is like playing chess. I’ve been trying to adhere to that, but I still don’t know how to actually play chess.

One thing you wish would disappear from drink lists forever:
I think maraschino cherries shouldn’t be found in any bar. The FDA declassified them from a food to a decoration. Yeah, they were great when we were kids, but let’s move on.

If you could mix a drink for any person, dead or alive:
David Bowie. Or maybe Bernie Sanders, but a really healthy, nonalcoholic drink to keep him vivacious.

Favorite thing to do when you’re not drinking or making a drink:
The best part about being on the East End is the bucolic landscape and pristine beaches. I love spending time outside and I can’t go more than a few days without finding an excuse to visit farm friends.

Your favorite bar and why:
Every railroad diner car in America was made in my hometown of Worcester, Massachusetts. Several have stayed in the city in the form of stationary diners, and one called Ralph’s Diner built an addition for a music venue and larger bar space. There’s a pool table, a beat-up TV playing a VHS of Hellraiser or the like and usually punk or hardcore music. The only food served is burgers, chili and Frito pie. Pints of Narragansett are $2. Need I say anything more?

The best thing you ever drank:
The Chartreuse Swizzle at Belcampo in Santa Monica. The bartender made a giant version in a big golden pineapple for my buddy and I to share.

The worst thing you ever drank:
My mom used to be on a bowling team with this woman in her late eighties who was extremely fit and filled with vivacity. My mom asked her what the key to living a long, healthy life was, and she said that every morning she took a shot of apple cider vinegar with raw chopped garlic, followed by a chaser of local honey. It’s pretty gnarly. I do enjoy drinking vinegar though, and that’s why we have multiple shrubs on the cocktail list.

First time you got drunk:
A few friends and I polished off a bottle of Jack Daniel’s my freshman year of high school. We danced around my room listening to my Led Zeppelin vinyls until we didn’t need to dance to feel like we were spinning. I think I’ve drank it only once or twice since.

After your shift, you drink:
If there’s a half-used bottle of ginger beer, I’ll definitely finish that off. And a regular beer, too. 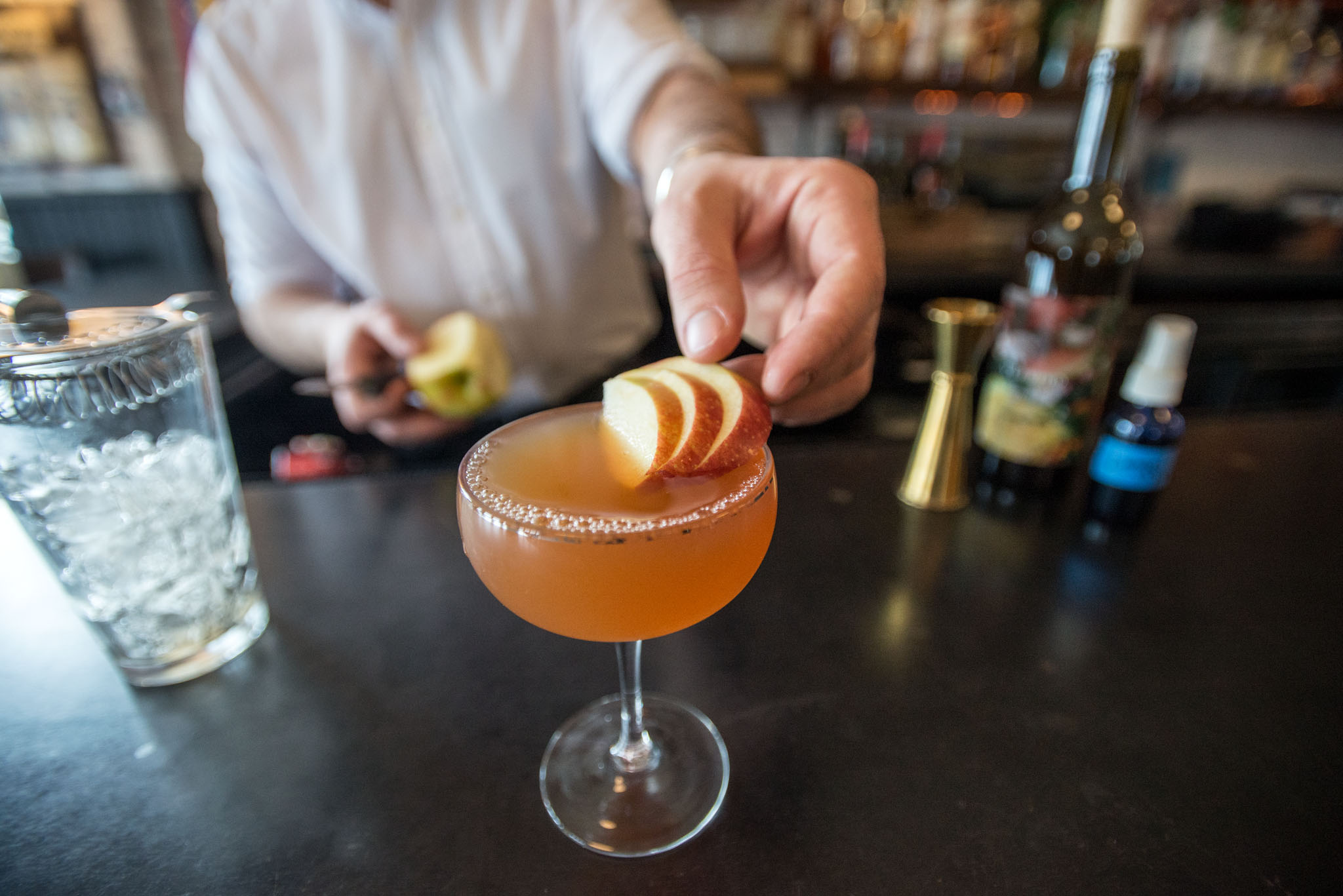 This fall I made lovage and parsley flower bitters with my homie Laura Rose from Amber Waves Farm in Amagansett. Lovage is like the medicinal cousin of celery. It has a hollow stem and was used as a straw in the first Bloody Mary ever made. Given its herbaceous floral properties, we paired it up with a local vermouth from Channing Daughters Winery to walk hand-in-hand, not contrast. A little local apple cider sweetens it a bit and Christopher Tracy, the head winemaker at Channing Daughters, suggested we add a bit of gin to make it all “pop.” His son is named Cooper, so we decided to name the drink after him.

1) Combine all ingredients in a mixing glass over ice and stir until chilled.
2) Strain into a chilled coupe.
3) Garnish with thin apple slices.