Greg Baxtrom doesn’t have time for formalities—there’s food to be eaten and comfort to be had—nor does he define a great restaurant simply by the type of water it serves or the color of its tablecloths or the cost of its meals.

That’s why, “is tap water okay?” is the first question you’ll hear at Olmsted, Baxtrom’s Brooklyn eatery. It sounds innocent enough but it is purposeful—the philosophy imbued in the question is the guiding principle for both the forthcoming meal and the entire Olmsted experience. “I always feel like an idiot or cheap when the waiter says, ‘tap, bottled or sparkling?’ I feel like the guy ordering the hose water because I don’t want to pay for water,” Baxtrom said. “We just come to the table, the menu is already on the table, ‘is tap water okay?’ Like, let’s get going.”

Baxtrom has in fact been going, full speed, for the past 12 years, working more than 80 hours per week. “[I’ve learned] the value of hard work. It’s a little cliché to try and explain to someone why you should come in on your day off, why you should come in early and why you should be staying up at night not able to sleep because you’re not okay with your performance for the day.”

That work ethic was instilled at a young age when the Chicago native was forced, as a “house rule,” to get a job at age 15. The only place in town that would hire a teenager was Wendy’s, a fortuitous landing spot that would eventually lead to a prep cook position at a local country club. While still in high school, he attended a culinary summer camp, cementing his desire to pursue the profession. When graduation came, he immediately enrolled in culinary school without taking the summer off.

As he was finishing, Baxtrom caught his first big break: an internship at a new Chicago restaurant called Alinea. He didn’t know it then, but Alinea would quickly become recognized as one of the best restaurants in the world—today it sits as one of 12 American restaurants with a three star Michelin rating.

“I was the last intern to show up, I was the lowest of the low. A week into me starting there, the guy that ran my station, the chef de partie, quit. It was too overwhelming for him. Chef [Grant] Achatz came up to me and said, ‘Either I hire someone or you take his spot, it’s up to you.’ I just ran with it and I wound up staying for three-and-a-half years.”

The best result of his Alinea stint was the opportunities that arose from it: jobs at iconic eateries Per Se and Blue Hill at Stone Barns. Still, an opportunity is only what you make of it and as far as Baxtrom sees it, success comes only to those with an unrelenting desire to be successful. 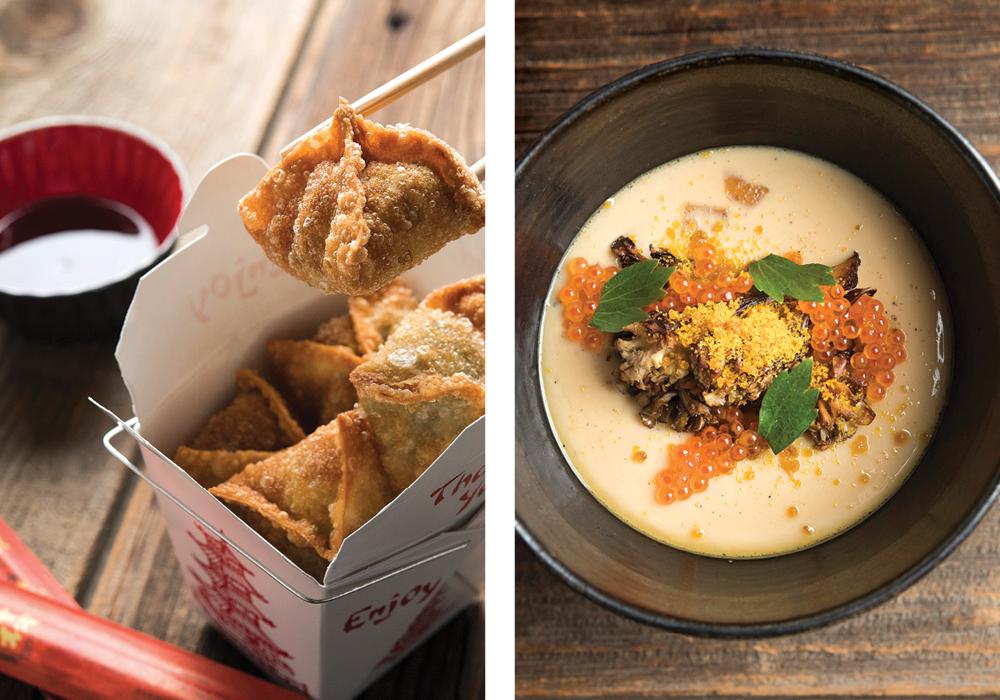 “If you work at one of these restaurants you’re going to be working 65 hours a week, minimum. So if you’re constantly developing, if you’re constantly getting better in those 65 hours, that’s just more skill you’ve developed to put you ahead of other people…If you’re not uncomfortable because you could’ve cooked that duck breast better, you’re just not going to come out the other side better than anyone else.”

The result of those hours was the readiness to finally go solo, which Baxtrom did when he opened Olmsted in Brooklyn’s Prospect Heights neighborhood last summer. The chef is a proponent of the farm-to-table movement (the restaurant has a backyard garden which supplies some of the menu’s ingredients). But that is where Olmsted takes a decidedly sharp turn away from restaurants of a similar ilk, eschewing the fussiness that envelops most highbrow, fine-dining establishments. “We try to be pretty playful and silly with the food and we don’t over explain anything.”

It would be a mistake to confuse this casualness with nonchalance—Baxtrom’s ingredient-focused menu is carefully curated. “If someone ever tells you it’s ingredient-driven, it’s very vague. When I say ingredient-driven, [I mean] ‘I haven’t worked with crab in a year, let’s do crab now. There’s a really great Peekytoe crab in season right now, we’ve got kale growing in the garden and we make really good ricotta cheese.’ So someone spits out, ‘What if we make crab Rangoon?’ And crab Rangoon becomes a dish here.”

The Rangoon, like every offering at Olmsted, is meticulously executed. “It’s tasty and salty and served with sweet-and-sour sauce and to the guest, they’re just getting something fried with sweet and sour sauce. But really, behind the scenes we’re using our fine-dining experience. It takes us three hours to make the Rangoon, there’s 50 ingredients in the sweet-and-sour sauce, the Peekytoe crab is coming from this amazing source. It has everything in it from the fine-dining world, it’s just a little less showy, less self-important.”

That unpretentious approach shows itself repeatedly in the fully à la carte menu. “My goal was always to open my own three-star mecca restaurant, where everybody had to eat the food that I wanted whether they liked it or not. As you get older you realize how obnoxious that is. Some of these chefs, when they open restaurants it’s about them, it’s for them. This restaurant isn’t about me and for me. I don’t look at my restaurant through the lens of, ‘Well, I like this and if someone else doesn’t get it, too bad.’ If someone else doesn’t like it, I change it. I’m not the one paying for it.”

It’s working—Olmsted was named one of Esquire’s best new restaurants of 2017. But you don’t open a modest, casual eatery for the accolades. Baxtrom is simply looking for a place to call home. “You still get an experience here. You can start out in the garden and have some canapés and a glass of wine and have dinner inside and finish outside again under the heaters with blankets and hot chocolate.” Of course, even the hot chocolate is quintessential Olmsted. “We serve it in miss-matchy sort of mugs. They’re not goofy mugs because we can’t afford nice ones, they’re goofy mugs because we’re not trying to show off every time we serve something to you.”