Fewer than 20 passengers sat shoulder-to-shoulder in the twin-engine Air Kenya prop plane I boarded en route to Angama Mara. Their ears were covered with noise-cancelling headphones and their foreheads were pressed against the plane’s small windows. Nairobi’s sprawling suburbs were to be left behind, yielding to a landscape of golden-green hills, creased here and there by streambeds long since dried to nothing in these arid months.

Before long, the plane began its descent. Circular Kraals began to dot the earth below, acacia wood cattle pens announcing the presence of Kenya’s Maasai people. Forty-five minutes after takeoff we bumped back to Earth amid a herd of curious wildebeest and zebras at the northwestern edge of the Mara Triangle that stretches between Kenya and Tanzania. “Ok, everybody staying at Angama, get off here,” shouted the pilot over the whir of the propellers. In these parts, each lodge lays claim to a private red gravel airstrip and the safari begins before your plane touches down. 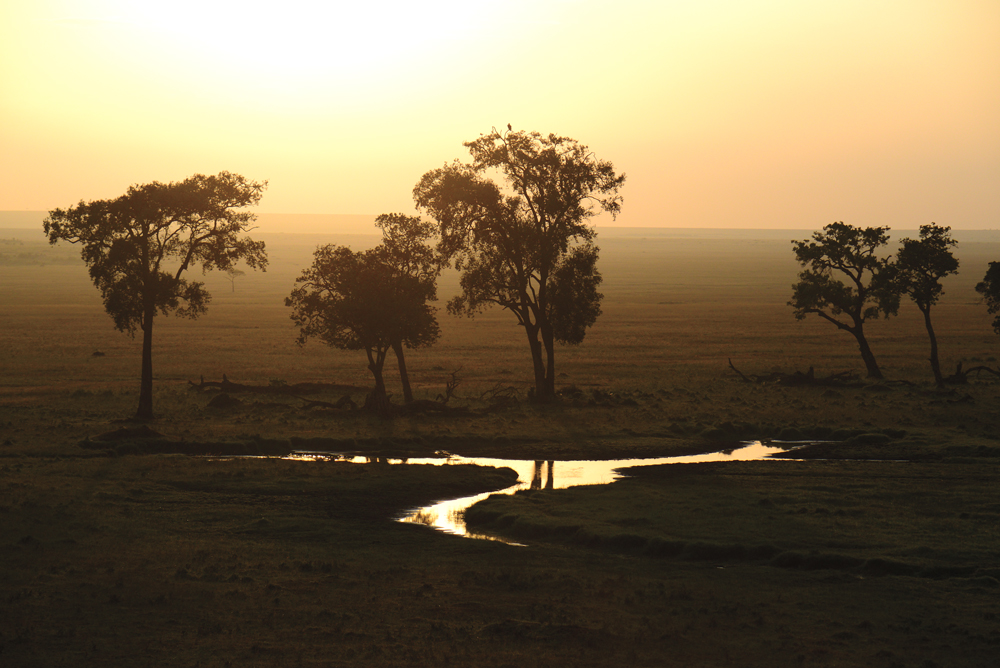 Thousands of animals live harmoniously in southwestern Kenya: lumbering buffalo and wildebeests, grazing zebras, giraffes and elephants. Perennially startled warthogs zigzag nervously between them all, always on the move, their tails pointed skyward. The local pride of lions lounges around their latest kill. Today they feasted on a buffalo, a brutal dinner that nonetheless seemed beautiful for its wildness.

The Maasai Mara National Reserve forms the northernmost reaches of Kenya’s annual Great Migration, the famous trek that measures animals in the millions. But even now, during the Mara’s slower season, there is no dearth of wildlife. It’s easy to spot 30 species in only a few days. Favorites like elephants and giraffes loom large, but lesser-known creatures offer as much excitement, if only for their exoticism. Rusty-brown oribi, small antelope measuring no more than two feet high, leap anxiously and nimbly through the brush. Fuzzy bush hyraxes poke their heads out of trees, still as statues—one morning I even discovered a curious little rock hyrax peering through my window when I stepped out of the shower. 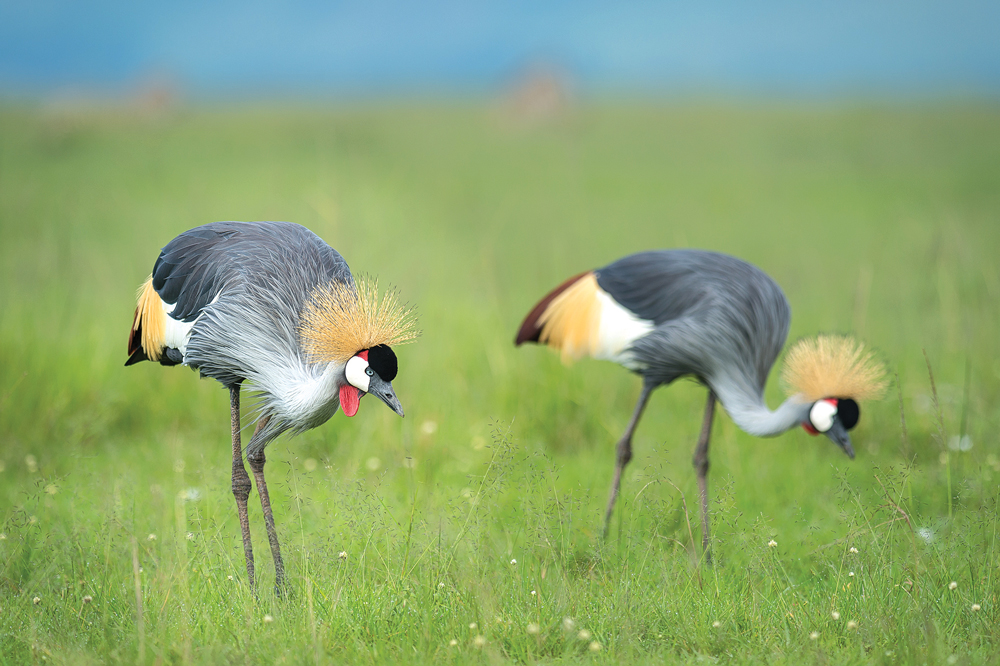 Kenya’s Mara stretches to the horizon, reaching the Tanzanian border to the south and merging with the Serengeti beyond. The silver ribbon of the Mara River slices through these broad grasslands, dotted by the shadows of clouds, speckled here and there with umbrella acacias and desert date trees. In fact, the word mara comes from the Maasai word maa, meaning “spotted” and it’s perfectly applicable.

On our first day out, at a bend in the Mara River known as the hippo pool, my driver Benjamin and I watched the water roil with bathing creatures who seemed always to be jockeying for a better spot. Shortly thereafter our Land Rover scared up a hyena hidden in roadside grasses. Soon after that we discovered a cheetah family in the shade of a cypress grove, the mother panting in the heat, her three cubs wrestling for a heavily gnawed bone. 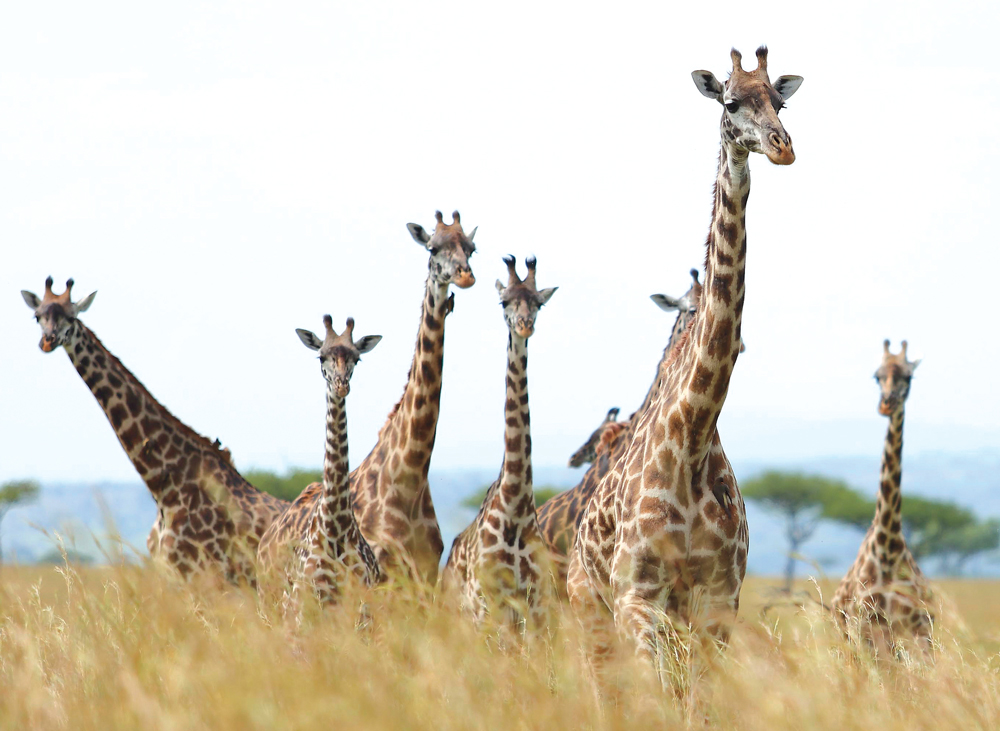 A herd of Maasai Giraffe in the long grass. image: angama mara and marius coetzee

Midday, we took a break from the rugged outing to picnic beneath the shade of an acacia. We nibbled on fresh fruit and cucumber sandwiches, bottles of cold water and chilled white wine. And we talked about the Mara’s elusive leopard.

“Leopards are the most difficult of the Big Five to spot,” Benjamin said, noting that Tanzania’s Serengeti National Park was more to their liking. Thicker forests give the big cats better cover, which explained why we might not spot them in the Mara. Were they to find a favorite tree, the leopards would be unlikely to leave their treetop perches for longer than it took to kill an animal and drag it into the thick foliage. 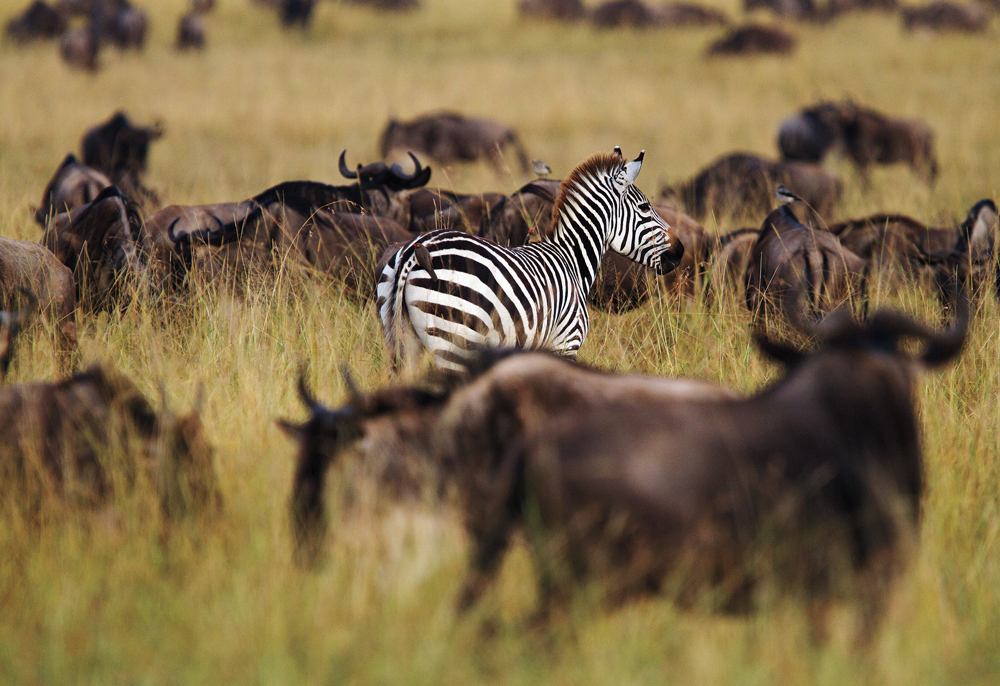 A lone zebra in the midst of the Great Migration. image: angama mara and marius coetzee

The remaining four of Africa’s Big Five are indeed easier to spot. In the Mara they are nearly ubiquitous, making it possible to forget they are a rarity in the world, even in their native Africa—increasingly so because of the continued poaching. The Great Elephant Census of 2016 showed a dramatic 30 percent decline in African elephant populations over seven years. Rhinoceroses have suffered even greater declines. Total animal counts dropped 96 percent from 1970 to 1995 according to Save the Rhino.

Unlike countries such as Tanzania, Mozambique and the Democratic Republic of the Congo, Kenya’s elephant and rhinoceros populations have begun to stabilize. This can be counted as a step toward progress for wildlife but also for Kenyans, whose collective well-being promises to benefit far more from the animals’ survival than any short-term gain from the sale of horn. (Tourism ranks as Kenya’s third most important industry). “At Angama Mara, we pride ourselves in this beautiful property,” said Kate Fitzgerald Boyd, the lodge’s marketing director. “But we understand that people come here for the animals. Without these animals, no one will come.” 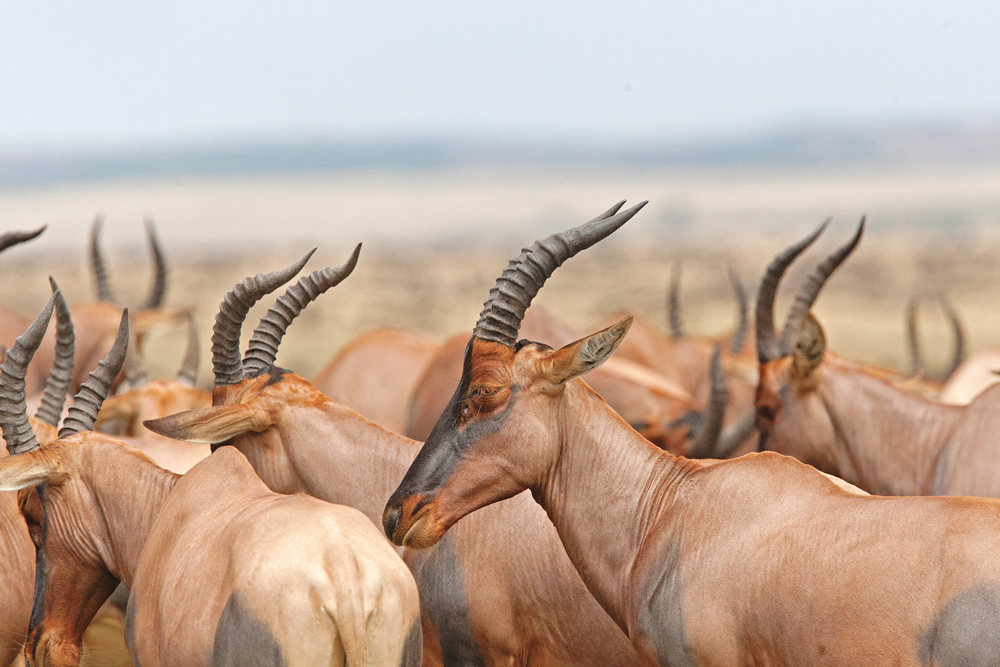 A herd of Topi Antelope in the Mara triangle. image: angama mara and marius coetzee

Mornings in Kenya dawn bright and rose-colored. Long before the sun bursts upward, the broad sky grows pink and the savannah that had disappeared into blackness the night before takes a golden glow. The horizon is indistinguishable, lost in a morning haze that melds sky into earth and earth into sky. Rainbow-striped hot air balloons frequently dot the Mara’s vistas. Floating noiselessly over the landscape for a bird’s-eye perspective of breakfasting zebra and wildebeest herds ranks as a popular tourist activity. With any luck, the ballooners will spy a Maasai drover herding his pale gray cattle out for the day’s grazing.

The Maasai people who lend their name to this natural preserve live semi-nomadic lives in an expanse of land straddling the Tanzanian border. Wrapped in traditional scarlet red cotton and adorned with brilliantly-colored beadwork, the Maasai pick along the landscape, walking stick in hand, trailing a procession of cattle. It’s a scene that seems a snapshot of antiquity…until you spy the cellphones so commonly pressed against their ears. 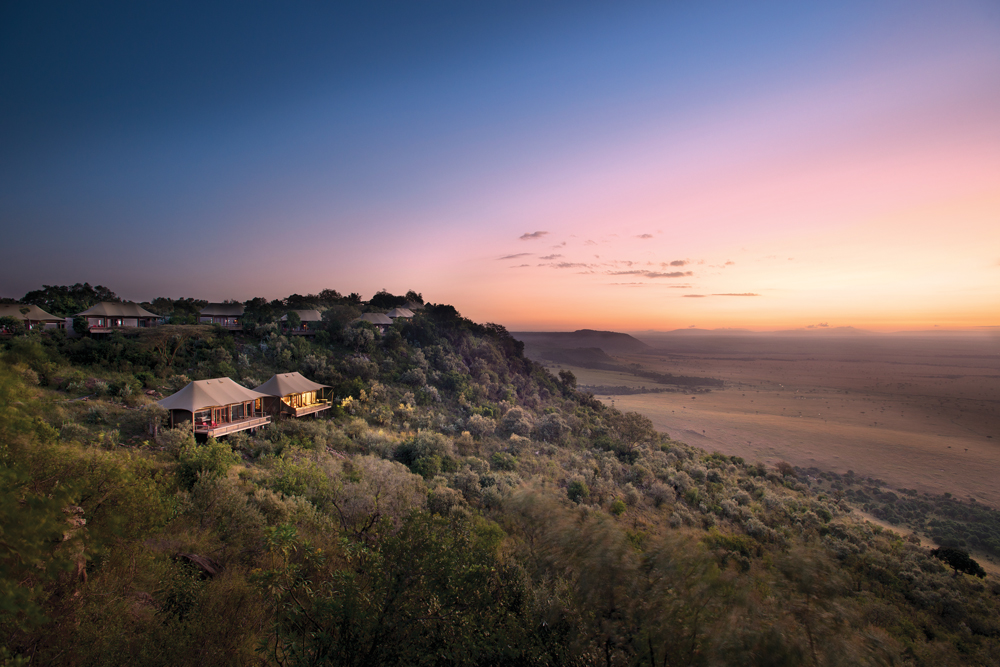 It’s an experience at once enlightening and disheartening: a people whose subsistence revolves largely around the livestock trade find themselves more and more under strain. The very preserves that protect local wildlife reduce the territory open to grazing and water collection. And the lodges that bring in much-needed tourist dollars occupy territory that might once have served as pastureland. It’s an age-old story, the weighing of conveniences like mobile phones and healthcare against the richness of a self-sufficient, indigenous culture. 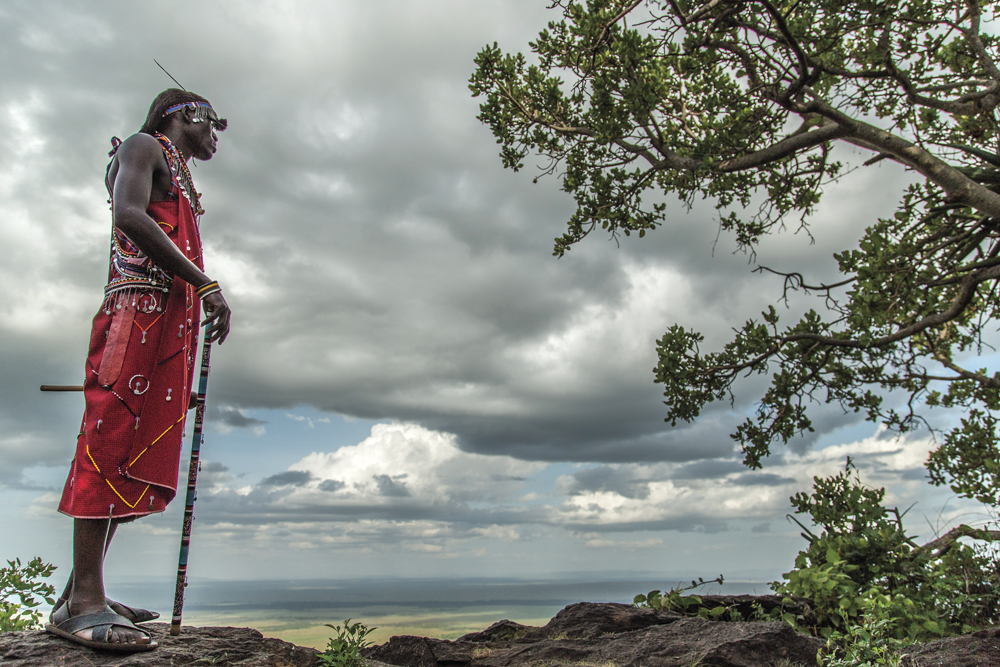 One of Angama Mara’s Maasai naturalist guides looks out over the Mara Triangle. image: james walsh

At Angama Mara, owner Nicky Fitzgerald has made strides to mitigate any tensions caused by the presence of their lodge. They leased rather than purchased the land, allowing local Maasai to retain control of the property. They established the Angama Foundation, contributing $10 per guest per night to a fund supporting local schools, a health clinic and wildlife conservation. And they have employed Maasai in varying roles at the lodge. “We believe wholeheartedly in Benjamin Franklin’s saying, ‘Doing well by doing good, doing good by doing well,’” Nicky said.

Lest guests forget the first people who occupied this land, Angama’s 30 tented guestrooms are sprinkled with touches that honor Maasai design: vivid red linens and decorative splashes; privacy screens that mimic traditional beadwork designs; guest wraps woven of Maasai red cotton instead of customary hotel bathrobes. And for those who can’t get enough of Maasai craft, the lodge employs half a dozen local women to teach beading classes.

My final evening in Kenya I sat in Angama’s dining room, the glass doors wide open to the pleasant night air, my chair facing the savannah. Seated 1,000 feet above the Mara I should have been able to spot the long, languorous movements of giraffes and the herds of zebras and buffalo. But the night had swallowed them in darkness. What drama occurring below—of hunting cheetahs and leopards, of ravenous lion cubs, of quietly slumbering wildebeests—I would not be part of it. I sipped my pinotage and looked skyward, searching for the Southern Cross.