There are some serious tasks—many will agree—which are best tackled in the first hours after sunrise. It’s a time when cooler air and cooler heads prevail, when fewer people and less commotion conspire to complicate the job. When that job is testing the mettle of this year’s most talked-about supercar, it’s nice to have a smooth, dry road, light traffic and nothing in the rear-view mirror. This particular morning, the car waiting under a cloudless gray sky is the new McLaren 720S, successor to the 650S Coupé. It neatly fills the slot into the carmaker’s Super Series, a step between the Sports Series (represented by the 570S) and the Ultimate Series (fielded by the $1.1 million P1). McLaren’s 720S will find itself at home in most up-to-date dream garages, next to cars like the Ferrari 488 GTB, Lamborghini Huracán Performante and Porsche 911 GT2 RS.

McLaren has only been building series-production automobiles since 2011, which makes them akin to a kid in a senior community. Imagine a six-year-old playing Seven Card Stud with Great-Grandpa Porsche, Uncle Lamborghini and mean-old-man Ferrari. The fact that the McLaren 720S can raise the stakes on these seasoned pros is by careful design, along with having a few decades worth of experience in Formula 1. It didn’t hurt that McLaren laid the groundwork in the 1990s with the F1, all 106 examples of which have become the most coveted 200-plus mph automobiles ever made.

The 720S is built in a factory as fastidious as a pharmaceutical laboratory. In fact, the way McLarens are designed, then fabricated, makes them well-suited for OCD types. But the 720S is not a delicate scientific instrument that requires coddling. We hammered, albeit respectfully, on our example, painted a mysterious dusky purple-violet that, covered with pin-sized dots of dew, almost vibrated in the flat, cold morning light. Although, that vibration may have just been anticipation. 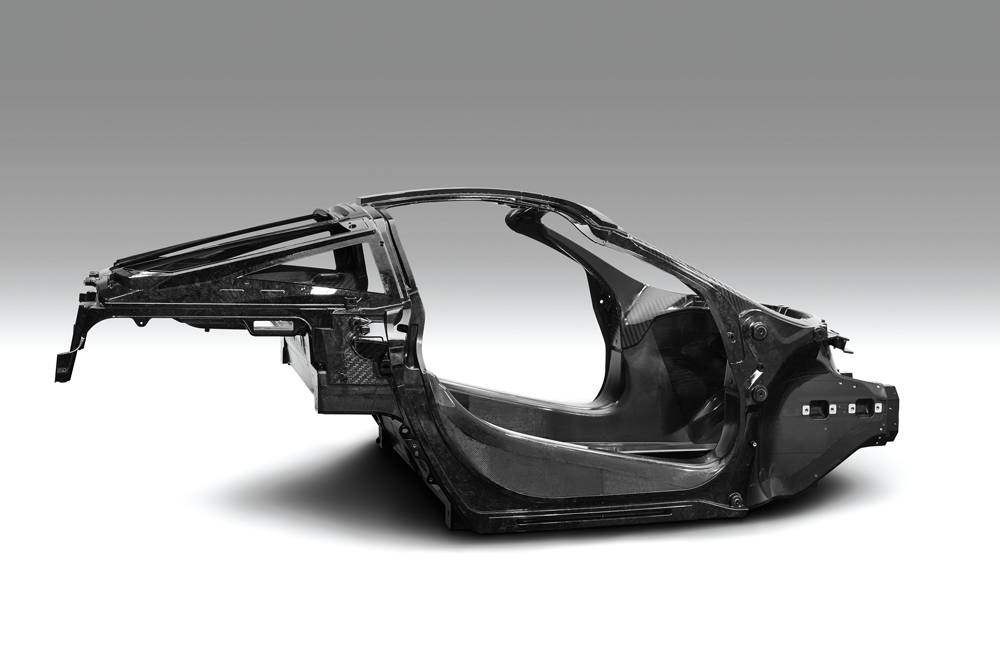 The McLaren 720S is an engineering marvel worthy of a cape.

There has been ample time to imagine how the much-anticipated 720S would acquit itself, as the principles of its design are evolved boldly from the 650 series. The 720S creates a more emotional bond than its predecessor, though its character always remains a bit aloof. Precision has a way of doing that.

Its designers say that the great white shark inspired the 720S. Aerodynamically, it’s as slippery as an eel—though far better looking—with a futuristic aura enhanced by dihedral doors that swing up and out. In between the skin of these doors air is channeled to the engine and radiators, thereby eliminating the need for visually intrusive side air intakes. Inside, shapes and curves seem somewhat discordantly tangled in a way that suggests the designers were trying hard to impart organic warmth in a setting as clinical as a dentist’s office. Driver and passenger spill over the wide sills and into narrow bucket seats, separated by a center console with a large, flat touchscreen display that floats in front of the dash. Whether or not the unorthodox cockpit appeals, its layout and ergonomic success let one focus on the business of driving. 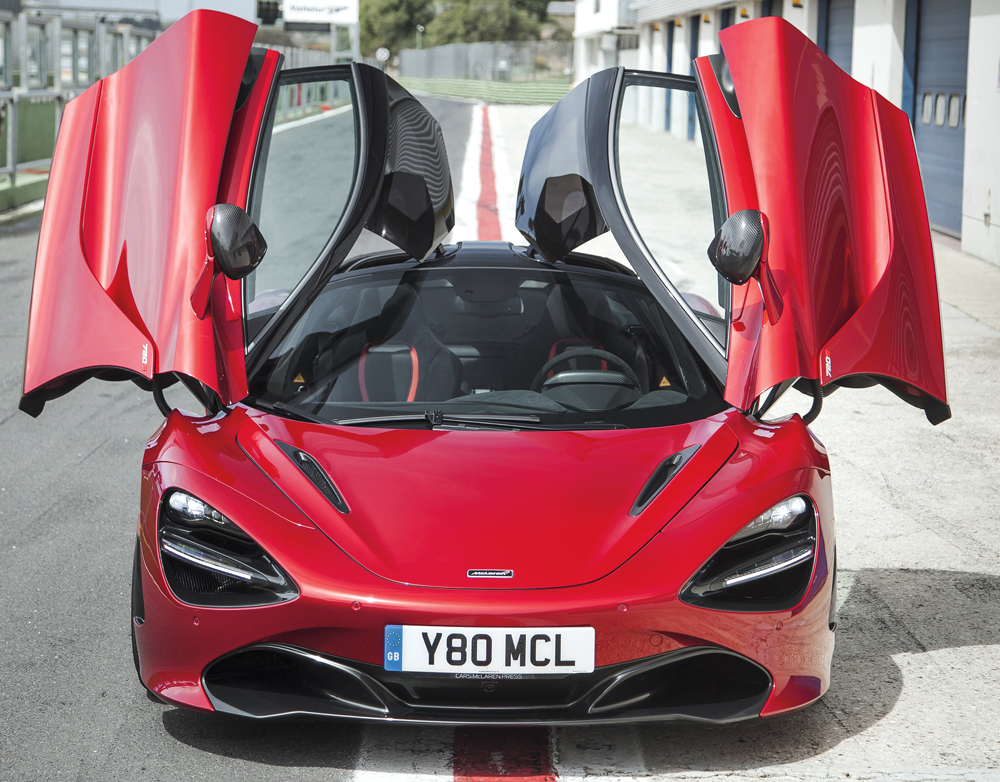 The McLaren’s performance formula is textbook perfect: mount a powerful engine aft of a one-piece carbon-fiber monocoque (called Monocage II), wrap everything in an aluminum body that incorporates sophisticated active-aerodynamic systems and get out of the way. The twin-turbo V8 engine is a McLaren staple, bumped up from 3.8 to 4.0 liters and driving just the rear wheels. The 710 hp and curb weight of only 2,917 pounds mean the 720S is lighter and more powerful than its competition, though hardly as loud. It’s almost quiet by comparison. Blistering acceleration is no surprise through a seamless seven-speed paddle-shift transmission, which shifts at 8,100 rpm in first and second gear and 8,200 rpm in the five beyond. Redline happens at the 8,500 mark.

Like its Italian counterparts the 720S has three modes that let the driver tailor response: Comfort, Sport and Track are selected on the Active Dynamics panel in the center console. They adapt engine, exhaust and the McLaren’s active chassis system with hydraulically-interlinked dampers (eliminating anti-roll bars at either end). This car’s sporting intent is evident even when dialed to the cushiest setting, rendering the car imminently suitable for daily drives. For any road with a curve in sight, Sport is the order of the day. Track mode unleashes a ferocious 720S, and though we were tempted to exploit the Drift mode setting, we demurred on public roads. 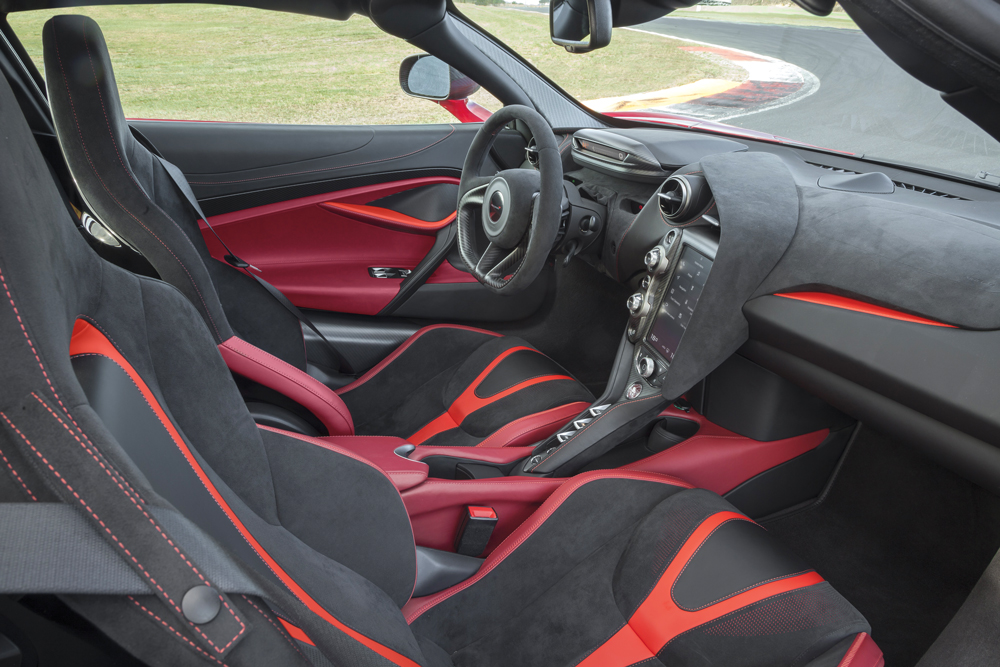 The electrohydraulic steering is light and instantaneous at speed, yet around town it has responsive feedback that prevents slow drives from becoming a bore. Pirelli PZero tires stick like glue made from Ferrari’s horse and the car loses nothing in terms of grip and sure-footedness for lack of all-wheel drive. In fact, the rear-drive bias makes it more visceral and responsive in a way that will appeal to purists who also want a car that maintains its composure at speed. Brakes require some heavy pedal pressure to regulate smoothly.

Whether or not one chooses a McLaren in deference to other dream-(super)cars will depend on one’s priorities and preferences. Ferrari’s shrieking wail and Lamborghini’s stentorian roar are absent, along with the intangible romance of an Italian marque. Instead, the 720S is a technically accomplished exercise in perfection—the way McLaren envisions it. For those whose vision aligns, the choice is an easy one to make.