District attorneys tend to be male—out of 62 in New York State, only 12 of them are female. But for one woman with an unwavering desire to evoke change, that was never seen as a setback. “There were times that I would walk into a room and the majority of people would be men,” said Nassau County District Attorney Madeline Singas. “I never felt intimidated by that.”

Singas, a Democrat who resides in Manhasset, became the acting district attorney in January 2015 after Kathleen Rice was elected to Congress. That November, Singas was elected district attorney and started a four-year term in January 2016. “It was hard to go from being a career prosecutor to running for office. It was something that took me out of my comfort zone but I did it because it was important to me,” she said.

Yet her desire to be a voice for those in need started long before she stepped into a courtroom. Singas grew up in Astoria, Queens as the daughter of Greek immigrants. “I had to do a lot of the work for them and our extended family in terms of translating things and helping them get through things as simple as Con Edison or going to doctor’s appointments,” she said. “Being a woman, being first-generation, all of that just naturally gave me an empathy and a desire to help people.” Singas also credits her mother, her role model, for encouraging her to get an education, pursue a career and fight through any barriers. “I can hear her in my head constantly. She really believed in me and taught me to believe in myself,” she said. 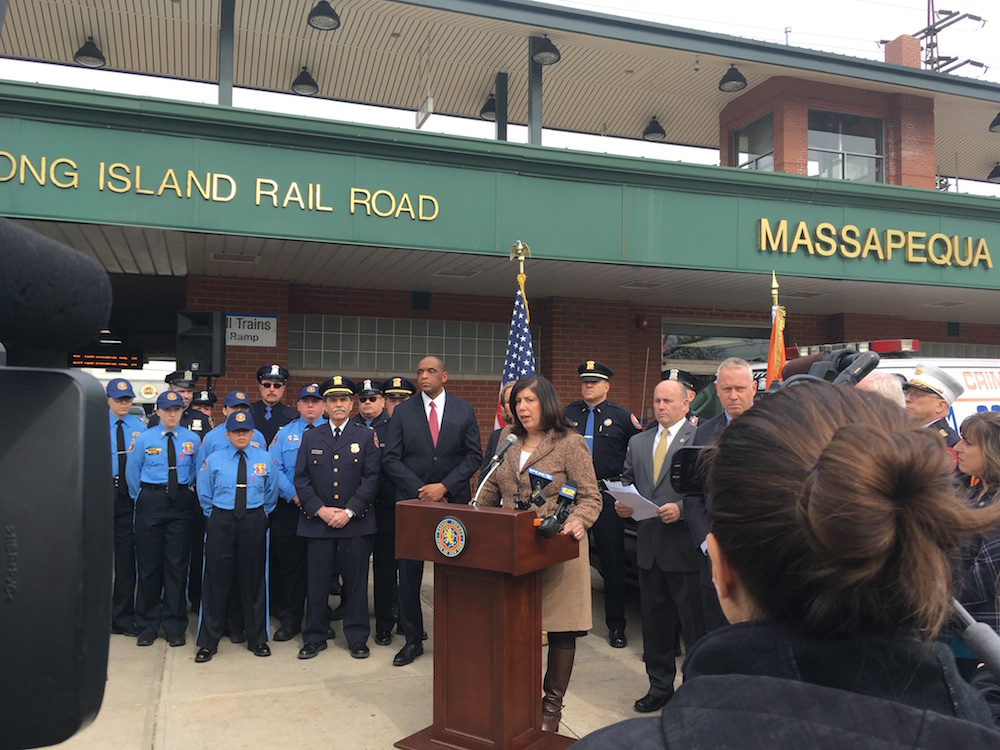 After graduating from Fordham University School of Law, Singas became a prosecutor in Queens. In 2006, Rice hired her to start the first special victims bureau in Nassau County. “I was really humbled by that—to come out here and start a bureau focused on women and victims of some of the most horrific crimes that we can think of,” Singas said. One such crime was the murder of Jo’Anna Bird. The 24-year-old mother of two was stabbed to death in 2009 by her estranged boyfriend, Leonardo Valdez-Cruz. He was sentenced to life in 2010. “I tried the Jo’Anna Bird case so these are issues that I’m very well aware of,” Singas said. “We work hard to make sure that women get the orders of protection that they need and that we can collect the evidence to hold these offenders accountable.”

Women’s issues are only a fraction of the work Singas does. She is committed to funding Maryhaven’s New Hope Crisis Center, a program that helps heroin users receive long-term treatment. She launched the Choices and Consequences program to teach youth about the dangers of driving under the influence, and an elderly crimes unit to prevent abuse against senior citizens. She’s taken down major drug suppliers, gang members and even animal abusers. “I’ve been on the clock 24/7 for many, many years,” she said. “A lot of crime does not happen between 9 and 5. Most of it happens overnight and on the weekends. It’s just a way of life that I’m used to. It’s something that I would never give up.”

“My advice to women is go for it, follow your dreams, don’t let anyone stand in your way and work really hard because that’s the way you will get noticed,” she said. “It’s a really great time for women, for our daughters to see and emulate themselves on some of our careers.”

In honor of Women’s History Month, Long Island Pulse is celebrating inspiring females leaving imprints on Long Island and beyond. Check back next week to hear from the president of real estate giant Douglas Elliman’s Long Island division, Ann Conroy.