Hybrid theater performances incorporating rock and other musical forms aren’t necessarily new on Broadway. But Rocktopia, an upcoming touring show fusing rock and classical music in a multimedia extravaganza, takes this further with a rock band, full symphony orchestra and a powerhouse choir. Think Queen mixing with Beethoven and The Who with a bit of Strauss.

Rob Evans and Randall Fleischer, the creators of the work, are no strangers to this musical fusion. Both have traversed the rock and classical worlds for a long time. Evans, who performs in Rocktopia, has worked with symphonies and has sung regularly with the Trans-Siberian Orchestra. He’s also appeared in such Broadway hits as Les Miserables and Jekyll and Hyde. Evans dished on the Broadway show before it officially opens on March 27 through April 19.

Theatrical reenactments of classic rock from the 70s and 80s have enjoyed a resurgence over the past six years, such as Rock of Ages. Why do you think there’s such a strong appetite for that kind of music in theater?
I grew up in the late 70s and 80s with what is called classic rock and those melodies still hold true. My generation wants to relive those moments in their lives with the music. There’s definitely a nostalgia element for my generation. That music was the soundtrack of my life. But young people are also drawn to classic rock…There’s a commonality in themes and musical and emotional journeys between classic rock icons and the masters of classical music. People are really responding well to the music of bands like Pink Floyd and Queen on Broadway. The music of those bands will resonate and last well beyond my lifetime.

How does Rocktopia differ from other musical-oriented theater performances steeped in classic rock music?
Rocktopia isn’t a musical; it’s a touring concert project. It’s very different from Rock of Ages, for example. We’re not a tribute band. Randall Fleischer and I have created symphonic rock music with Rocktopia, and we both have a passion for classical and opera music.

I love the idea of the fusion of rock and classical music. The connection between the two isn’t as farfetched as it might seem. In fact, if Beethoven and other classical masters were alive today, they’d be rock stars and live like rock stars. 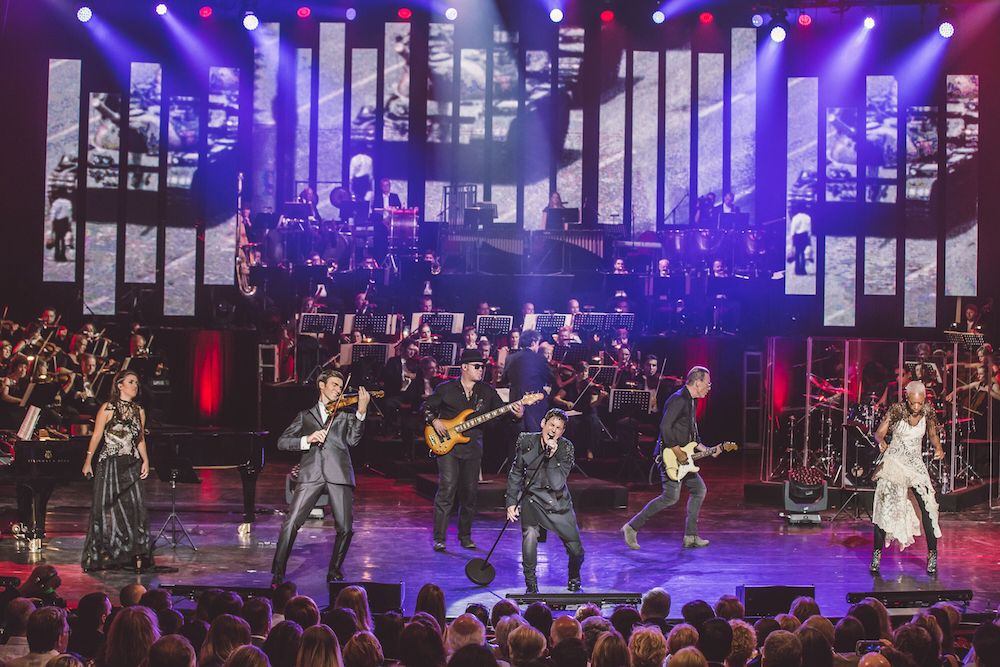 It seems as if there are parallels between the Trans-Siberian Orchestra and Rocktopia in the melding of classical and rock music. What similarities do you see between the two, especially from your vantage point as a performer for both projects?
There may be a few similarities between the two, but Rocktopia is a really different experience from TSO. We’re really playing classical passages as they were originally intended. In essence, we’re revitalizing classical music, and making it accessible to larger audiences. We try to honor classical music in a different way from TSO. We’re playing the original classical compositions and integrating them into a rock show.

The show is set in movements, like a symphony. Those movements reflect a person’s journey through different phases of life from birth through adolescence, rebellion and love, to loss, death and rebirth. Our aim is to lift the bar of musicianship as high as possible, while still being accessible. We want the show to come across as authentic and joyful, but not too highbrow.

Pat Monahan of Train is a special guest in the show.
We have a number of special guests. Pat is perfect for our show. He’s the next Robert Plant and is a great songwriter. We play a few of his songs in the show. Those are some of the show’s highlights.

Are there any plans to record an album or video of Rocktopia?
We did a PBS special of a show we performed in an opulent opera house in Budapest in June 2016. The show included an hour of the performance, and a DVD was released. We did the show with a local choir, which came off well. The opera house had never hosted a rock show before and had some initial reservations, but they were very pleased with the results. There are plans to release different versions of the touring show on record or possibly on film.