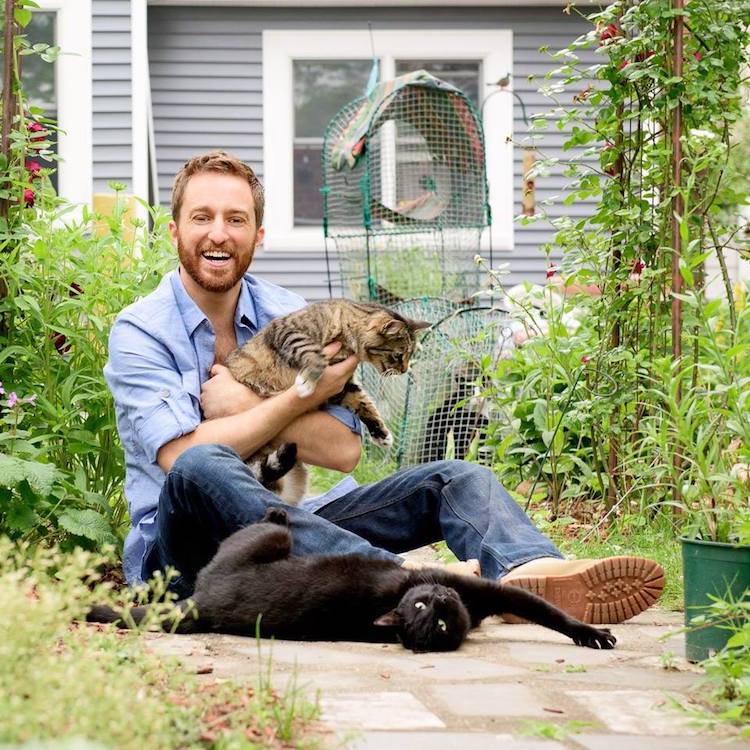 While studying psychology in college, John Di Leonardo also took a class about Jainism, and it ultimately changed his life. The nontheistic religion of ancient India practices non-violence on all things living. Aside from people and animals, that also includes plants. Its followers are vegetarians who even avoid produce that grows underground because they die once they are pulled. “I went to lunch right after class, loaded up a plate of chicken as I usually did and looked at it with disgust. I pushed it away and never ate it again,” the Malverne native said.

Initially planning to become a school psychologist, Di Leonardo opted for a life protecting animals, instead. In 2012, he founded Long Island Orchestrating for Nature (LION), a pro-animal activist group that fights against the cruelty of animals. One of the group’s biggest targets has been circuses. It protested heavily against the now defunct Cole Bros. and Ringling Bros. circuses, which long received criticism from animal rights groups for the welfare of the wild animals. “There are a lot of other circuses that people don’t know about but are just as bad,” said Di Leonardo, who is also the assistant manager for PETA’s Animals in Entertainment campaigns. “We won’t rest until all of those animals are released to reputable animal sanctuaries.”

LION has taken on other sensitive issues across the country, including the fur industry and petting zoos. With about 1,000 local participants, LION also tackles issues close to home like allowing geese to roam freely on Lake Ronkonkoma. “These are native wildlife, they live here, they are part of our environment. People need to learn to co-exist with wildlife.”

Aside from circuses, are there other tourist attractions around the world that have been accused of animal abuse?
Just like there’s no kind way to stuff an elephant or a tiger into a boxcar, there’s no kind way to force a tiger to do a photo shoot with a kid. Typically those tigers are little baby cubs that were ripped from their mothers shortly after birth and then hand-reared so they could be used for these purposes. Sometimes they are drugged, they are sometimes declawed. These animals really suffer greatly for photo shoots or attractions no matter where they are. Thankfully the public is coming against those as well.

Why are so many more people paying attention now?
It’s the modern age of social media and films like Blackfish and Sled Dogs—that’s basically the Blackfish of the sled dog industry exposing the deaths of dogs during the Iditarod race. This information is more accessible to the public. I think millennials don’t want to see this abuse more than many other groups. We’ve really come to a change in tide when it comes to the use and abuse of animals not just for entertainment, but for anything. More and more people and places are going vegan.

Are there lesser-known cases of animal abuse that you feel people should know about?
In the egg industry, for example, the roosters are not useful because they can’t lay eggs. Baby birds are sorted at birth to see if they are male or female. If they are male, they are typically ground up alive or suffocated in plastic bags. Then the females are rewarded a short life of likely only a few years. They are allotted a life in tiny cages or even in so-called cage free or free-range operations where thousands of birds are plowed on top of each other in barns or cages.

What about issues on Long Island?
Fowl abandonment is an issue that people don’t realize is as big as it is on Long Island. More and more people are getting backyard chickens, which is not a good idea unless you’ve really thought about it and you are actually prepared for it…Most shelters don’t take fowl so [people] end up abandoning them on the streets. And abandoning a chicken is just like abandoning a dog—these animals cannot survive on their own, it’s cruel and they will die…We’ve already rescued 40 domestic fowl just in December and about 50 so far this year that were abandoned…Two hens died overnight when they were dumped this winter at Millers Pond in Smithtown. We worked with the Suffolk County SPCA to put out a reward that’s still out for the culprit who abandoned these animals. That showed a turning point that there’s a reward out there to find people who leave chickens to die…The same thing with Easter, we are gearing up for a big dumping season. People are going to be getting chicks, they are going to be getting bunnies and ducks for Easter photo shoots and then they will throw them away.

How do sanctuaries come into play?
More and more animal sanctuaries are coming to light. I just joined a board this week for Long Island Farm Sanctuary, which is gearing up to be a farm sanctuary on Long Island. We are considering locations on the East End, and it could be a couple of months to a year [before it opens]. As sanctuaries pop up more and more and pop up on locations like Long Island rather than far away in rural communities, they will become more accessible to the public. The public [will be able] to meet these chickens, meet these cows and the animals they typically don’t see living, they only see on their plate.