In 1930 a nearly 40-year-old, unknown artist from small town Iowa painted a picture of a dour faced couple—a woman with pillows of apprehension between her brows and a man with a menacing pitchfork set in front of a modest farm house. He entered it in a regional painting contest, won third place and immediately became a global art star. This was before the internet. The trajectory of Grant Wood’s “American Gothic” from his converted-garage studio to national icon was, “totally unlikely. It was on the front page of the Chicago Examiner and then it went viral,” said Barbara Haskell, the renowned Whitney curator and scholar who organized the museum’s Grant Wood: American Gothic and Other Fables. “It was as if it went on Instagram…this sort of sad, seemingly fanatical couple. Whether people thought it was satirical or celebratory…there was something about it that was so indisputably American, it captured people’s imagination and still does.”

Grant Wood was suddenly invited to exhibit everywhere, including at the first Whitney Biennial in 1932. He secured teaching positions, commissions and a steady stream of income. It was a classic rags-to-riches American dream. But dreams aren’t always what they seem. Haskell is out to change perceptions of this mythic but mysterious artist and at the same time highlight a rarely seen body of work. “The work is so mesmerizing, but people really don’t know it. The public only knows that one picture and it turns out all of the pictures have this similar kind of hypnotic appeal.”

She’s brought together dozens of paintings, drawings, glass works, book covers, decorative arts and a slyly corny chandelier fashioned from cobs, including pieces which have never left Iowa before, for what will be only the third retrospective survey of Wood’s work to date. The picture Haskell paints is one of a complicated artist caught in a whirlwind of political, societal, personal, economic, patriotic and artistic forces. “During the 20s, the urban, sophisticated world of the Jazz Age and F. Scott Fitzgerald was dominant. The Midwest was, in a way, derided as backward and unsophisticated. With the stock market crash, that totally changed. ‘American Gothic’ seemed an image of sturdy Midwestern farmers, small town inhabitants that were the backbone of America. And in the 30s people were searching for a kind of resilience that the couple seemed to possess.”

Yet despite their apparent heroic stoicism, no one’s quite sure exactly what Grant Wood sought to portray in this couple, not even Haskell, who’s studied his work for years. “It’s not this sentimental, bucolic, elegiac, Midwestern archetype. The work is much more complicated and layered. On first glance, it has this sort of romanticized depiction of an earlier time, but there’s much more going on. It’s much more biting, more disquieting. That dichotomy between the bucolic and the disquieting is what makes it so compelling. And it never resolves either way. You’re held in suspension between those two qualities.” 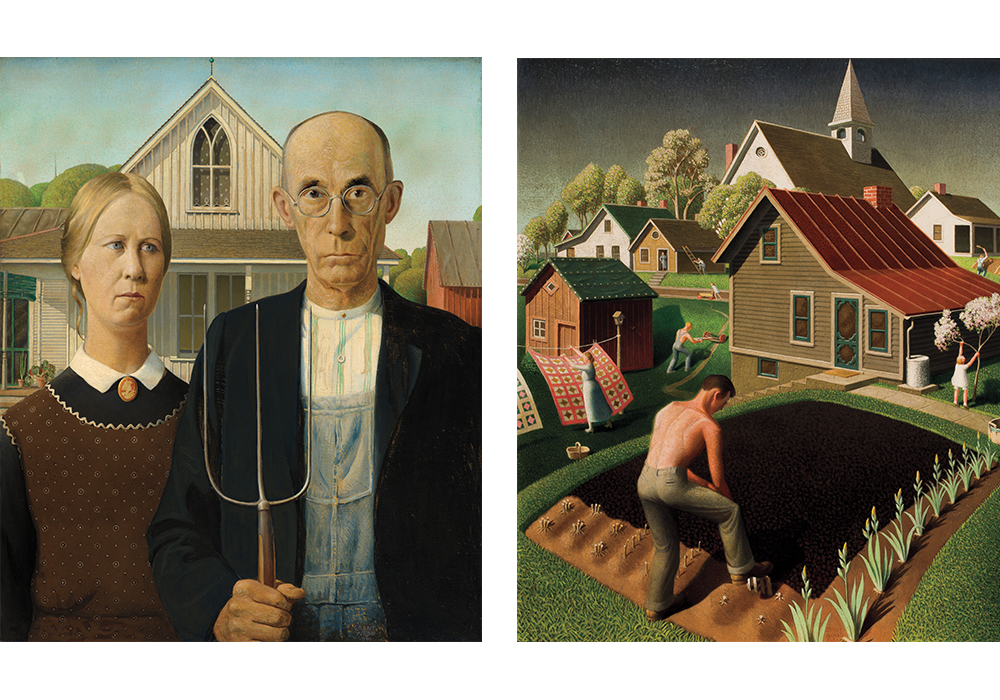 Haskell shares a fundamental trait with Grant Wood and his most famous work—she’s driven to tell stories. While curating at the Whitney, where she’s been since 1975, she’s presented both sweeping surveys of grand narratives like The American Century, as well as probing solo shows focused on individuals like Agnes Martin, Red Grooms, Stuart Davis and Georgia O’Keeffe. What draws Haskell to the work of an artist is also what she hopes to communicate to the audience: “transformative joy.”

That spirit infuses both her professional and personal life. She and her husband, Leon Botstein, the conductor of the American Symphony Orchestra and president of Bard College, are like twin beacons in New York’s cultural landscape. “Our lives are really centered around the life of the mind and the life of the visual and musical arts.”

Haskell has practically written the book on some of the most important artists of the first two-thirds of the 20th century, including a comprehensive new tome on Grant Wood’s work where she parallels his paintings with literature. “‘American Gothic’ is like a novel and that’s what he wanted his paintings to be. He wanted to have them have the psychological engagement a great novel has.” To achieve that, Wood built subtexts into his fables. Currents of the individual versus society, the inner life and outer appearances, clear and hidden divisions all find voice in Grant’s images.

It was reflective of America changing from a largely rural, agrarian way of life to a more urban and industrial one. Wealth disparities played out in the movies, literature and music. In the art world, European Modernism—a.k.a. Picasso and the gang—was hailed as supreme. Then, out of nowhere, came an artist creating serious, monumental and quintessentially American portraits and landscapes with the style and technique of great Renaissance masters like van Eyck and Dürer. They were beautiful but dense, like dark, glittering gems. Parody or patriotism, everyone saw in them what they wanted to see and they were embraced by both farmhands and intellectuals. That was the success of Grant Wood’s pictures.