In the decade following WWII, the number of Mercedes-Benz automobiles on America’s highways—where finned behemoths from the Big Three ruled the road—amounted to specks of sand among boulders. The quirky German sedans were no threat to the status quo, though the company’s remarkable 300SL “Gullwing” and Roadster started the ripples of German automotive dominance that swelled to tsunami strength by our present century. As racecars, and as ultimate luxury GTs, the original Mercedes-Benz SLs had no real competition.

More than six decades on, Mercedes’ formula for a no-compromise, grand-touring car remains much the same as it was in 1955: Plunk a powerful engine into a low chassis with a cozy cockpit for two, wrap it in a curvy body, add a giant three-pointed star on the imposing grill and watch other cars get out of the way.

Today, the Stuttgart-based automaker has differentiated its high-performance car offerings from the ubiquitous Mercedes-Benz brand by designating them Mercedes-AMG, born from the tuner that gained notoriety during the 1980s and was subsequently acquired by the factory to develop its highest-performance models. From 2010 until 2014, the Mercedes-Benz SLS AMG gullwing coupe and roadster were the standard bearers of the Silver Star, but were replaced in 2014 by the less expensive—though no less impressive—AMG GT series, available in Coupe and Roadster configuration. The AMG GT C Roadster is the top of the two-model topless range, up 81hp and 37lb-ft of torque over the “base” GT.

Raw power with finesse are the calling cards of the AMG GT C Roadster, coupled with an Old-World aesthetic that will appeal to those who appreciate the marque’s forebears. When one is ensconced in the intimate cockpit with steering wheel in hand, the combination of high window sills, low seats and pair of giant round instruments really does recall the driving experience of an original 300 SL. That same unadulterated “roadster experience” is what this car delivers, in a most sophisticated package. 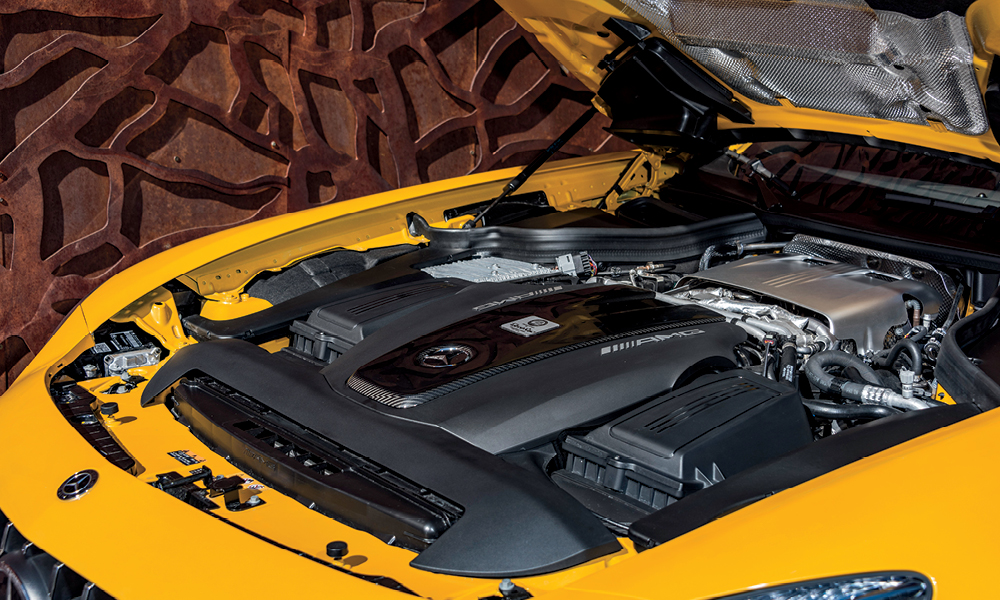 Compact, lightweight and more than 30 percent more efficient than its predecessor, the GT C’s engine may be Mercedes’ best yet.

Slippery as a jellybean, the AMG’s shape is antipodal to chiseled wedges from Italy or America, and conveys the visual substance of a Panzer tank. But at 3,825lbs, the GT C Roadster is not terribly heavy, thanks to an aluminum spaceframe chassis and body panels of aluminum and some carbon fiber. Weight distribution is ideal, a result of the engine being pushed far back toward the firewall and the 7-speed, dual-clutch automatic gearbox in a (rear) transaxle configuration driving the rear wheels. Aerodynamic efficiency is optimized by a body design with minimal drag and maximum downforce, enhanced by a retractable rear spoiler that deploys automatically at speed.

A signature of every AMG GT is of course, its brilliant engine, each one hand-built by a single technician. It conforms to the current high-power/low-emissions trend as a relatively small displacement V8 enhanced by the steroid equivalent of forced induction; in this case Mercedes’ biturbo formula used by the company for decades. Compact, lightweight and more than 30 percent more efficient than its predecessor, this may be the carmaker’s best engine yet. The V8’s ample torque from only 1,900rpm delivers a flexible feast of on-tap performance and rewards the driver with not only a shove in the chest, but with the guttural elocution characterizing the most Germanic oratorio.

The Mercedes-AMG GT C Roadster is not just made for long drives, but for sporting ones as well. While not designed to be mistaken for a Porsche 911, it does answer the call of curvy roads with the handling dynamics of a sports car. Four-wheel independent double-wishbone suspension can be dialed to three settings: Comfort, Sport and Sport+; we preferred Sport for all but highway driving. Hydraulic rack-and-pinion steering is nuanced and provides great feedback the quicker one goes, though is slightly numb at slower speeds and around town. The GT C, unlike the “regular” GT, gets electric rear-wheel steering for enhanced maneuverability at low speeds.

The GT C interior is a delightful and intimate place to be. With an emphasis on intimate, because even though the car is w-i-d-e, its low windshield, high doors, divisive center console and shoulder-hugging sport seats may put claustrophobics a bit on edge. But there is no shortage of traditional Mercedes-Benz luxury with various types and colors of available leather and trim, an optional Burmester Surround Sound system and other amenities that have been a trademark of the automaker from the beginning. Ladling on all the extras, it’s easy to nudge $200,000, but when the elves are done with their handiwork, one has a car with build quality to match its performance and style.

So what we have in the GT C Roadster is maybe the first true Mercedes-badged convertible sports car since the last 300SL rolled out of Stuttgart-Untertürkheim in 1963. Drivers in search of a really capable convertible with a German accent need to drive this car.