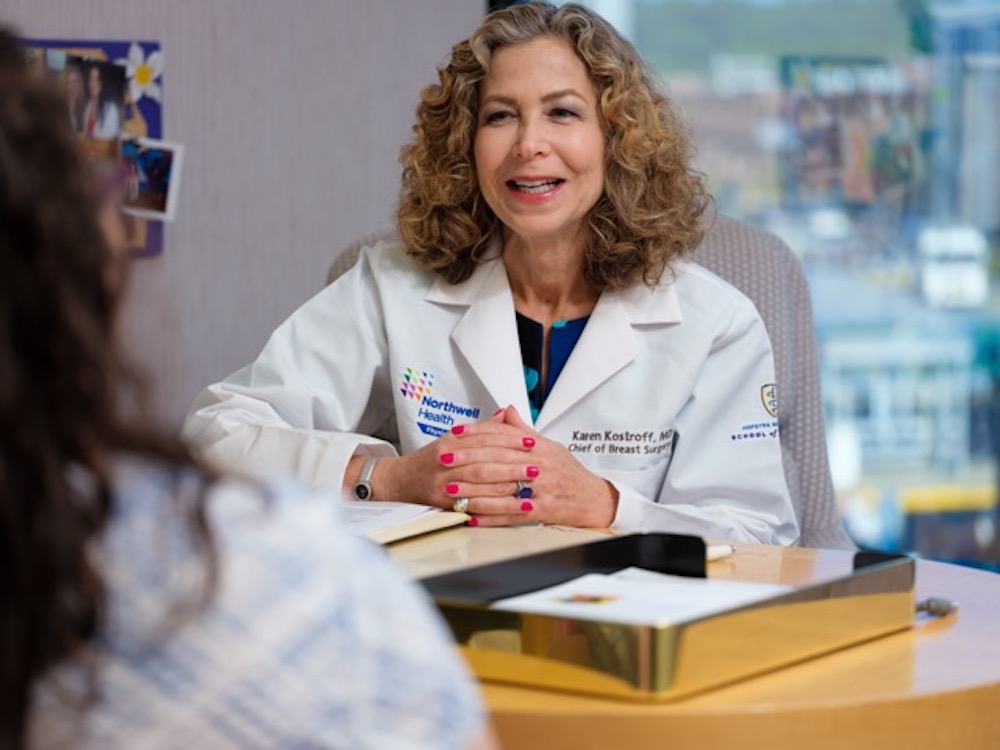 A consistently top-rated doctor and one of the nation’s leading breast cancer specialists, Karen Kostroff, MD, is also one of the most compassionate. Chief of Breast Surgery at Northwell Health, Kostroff is known for diagnosing and treating women at risk for genetic-based breast cancer, and for being supportive in their time of need. Kostroff also uses the most innovative surgical techniques from Savi Scout to nipple sparing mastectomy when she operates on patients at Long Island Jewish Medical Center.

Kostroff is married to a surgeon and her daughter and son-in-law are also surgeons. Yet only about 20 percent of U.S. surgeons are women. “The way to equalize the gender gap in surgery has a lot to do with the family structure,” said Kostroff, who has a flexible life partner. “If women (surgeons) want to have children there has to be some give and take in the marriage. Now you can take longer to do your residency, which is a plus for those who want to have children during those years.”

Related Content
A Voice for the Voiceless
The Joy of Success

Did you experience any barriers to advancement in your field?
I’ve been blessed because I’ve never had an obstruction to my career advancing. In 35 years, I’d say 10 percent made it easier for me, 10 percent made it harder with some sideways comments and most couldn’t care less (about my gender) because it was all about competency. On the other hand, the breast field is more female-dominated so that could be a component…I think taking advantage of this moment (of #MeToo and Time’s Up movements) will help.

While mammograms are still considered the gold standard and tomosynthesis has improved screening outcomes, do you see tests that don’t involve compression or radiation being used more in the future?
Automated breast ultrasound is a desirable option as it decreases the issue of quality of operator dependency, so results are less dependent on the user’s technique. But the more we do the less we miss. Sonograms use sound waves to detect masses—liquid or solid—while mammograms detect calcifications. So they complement each other. Right now, we’re also working on a faster MRI that would take 10-15 minutes instead of a half hour or more, and would cost less. The technology keeps evolving.

Regarding genetic testing, do you recommend the costly BRCA1 and BRCA2 blood tests?
The BRCA1 and 2 blood tests (which detect gene mutations increasing breast and ovarian cancer risk) are not always covered by insurance. Right now, for example, anyone with a family history of breast cancer under the age of 50 or of Ashkenazi Jewish descent will likely be covered. But there are other criteria and those who aren’t covered can do saliva testing through companies like Color, which tests 30 genes for hereditary cancer (including breast and ovarian) at a low price point ($249). If someone tests positive, first-degree relatives can then be tested for $50 each. Color also offers genetic counseling, so it’s very attractive for those who would like to take control of their health.

Do you use any new techniques for breast surgery?
In the past, when people had lesions that could not be felt, there would be a wire placed inside the breast tissue to locate it on the day of surgery. This was time-consuming, uncomfortable and added to the patient’s anxiety. With Savi Scout (a wire-free radar system using seed localization) a radiologist puts a (reflector the size of a) seed in the area prior to the day of surgery so we know where to operate right away.

What are some preventative measures against cancer we can take in our daily lives?
Obtain or maintain a desirable weight because you will decrease the risk of getting recurrent breast cancer, having hip and knee problems, hypertension and diabetes. At the end of the day, it’s about portion control not deprivation. Eat less sugar and more natural fruits and vegetables. Use a scale, walk and stretch!

In honor of Women’s History Month, Long Island Pulse is celebrating inspiring females leaving imprints on Long Island and beyond.