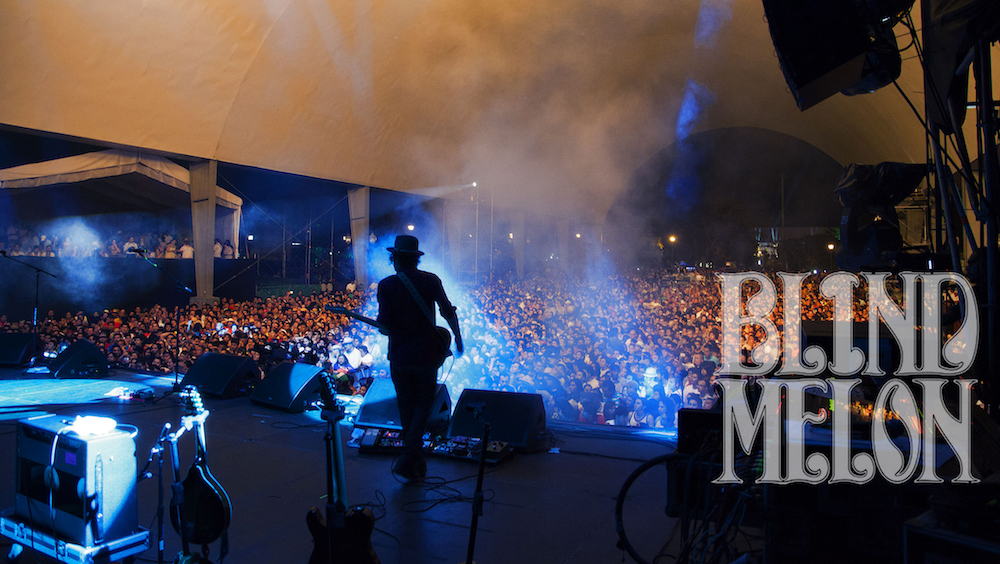 Although tragedy is part of the Blind Melon story (original singer Shannon Hoon died in 1995), the band has accomplished several feats. Formed in Los Angeles, Blind Melon is known for the insanely popular music video for “No Rain” (it has more than 21 million views on YouTube), a show-stealing performance at Woodstock ’94 and the initially overlooked sophomore album, Soup, that later became a cult classic.

Since 2006, Blind Melon has carried on with another frontman, Travis Warren, and is creating new music. “We did some writing out here at Joshua Tree and another session in Los Angeles. We’ve cut seven songs so far,” said original member and guitarist Christopher Thorn. “We’re all pumped. It just feels good to write songs again. It’s been too long.”

The group, which also consists of two other original members—Rogers Stevens (guitar) and Glen Graham (drums)—and newcomer Nathan Towne (bass) is also gearing up for a spring tour.

Nearly 10 years after interviewing Thorn for my book about Blind Melon, A Devil on One Shoulder and an Angel on the Other, he spoke with me about the past and present before the band performs at (Le) Poisson Rouge in NYC on May 2.

Do the new songs sound like any specific era of Blind Melon?
That’s always a hard thing and I think that’s for other people to figure out and label. Every band says this, but I feel like we’re writing our best songs. I really feel like we’re on to something now and we’re writing great stuff that reminds me of the Soup record, which is my favorite stuff.

Soup was not appreciated when it was first released in 1995, but has developed a cult following.
It’s crazy. Twenty years later, I feel finally validated. We felt like it was such a great record when it originally came out. For it to be slammed so hard, a record we were so proud of, was confusing to us. It was like, “What? I thought we did a good job.” I get that it was dark and it was different than the first record, but in the end, it really grew on people. And more importantly, it has a great shelf life because people are not over it. I’m really flattered that people still care about that record.

Looking back at the day of the filming of the “No Rain” video, did you have any idea it was going to be special?
Not really. By then, we had done so many videos, and it was a period where we were so busy; we would tour, tour, tour. We’d be someplace in the middle of the country, then we’d have two days off, fly back to LA, shoot a video, fly back to the tour. There was so much of that going on that the making of that video just went by and it was another day in our lives. But, it was a special day in the sense that it felt good to be outside…we were outside in this beautiful field…But I didn’t know it was special until I saw the first cut. I remember when we saw the first cut, going, “Oh shit, that really does feel special.” It felt better than all the other videos. The message felt so clear and it was a really beautiful, universal message: everybody wants to be loved and accepted.

I was really hit hard by the death of Chris Cornell last year. The last time I was that affected by the passing of a rock singer was Shannon. Although I didn’t personally know Chris or Shannon, I felt like I did through their lyrics and music.
Chris’ passing really gutted me. It hit me really hard and fucked me up for quite some time. It brought back the same feelings that you’re talking about with Shannon. We did know Chris and we toured a lot with him and he was so kind to us. He was incredible to us because that was the first tour we ever did [in the fall of 1991], and we didn’t know what we were doing at all. Soundgarden showed us the ropes. And they really were enamored by Shannon, because Shannon reminded them of Andy Wood [singer of the Pearl Jam precursor band, Mother Love Bone] so much. I’m still really crushed about the whole Chris thing. When you don’t have an answer, it’s really painful.

I’m looking forward to the upcoming Danny Clinch documentary of Shannon’s home movies.
I just hung out with Danny last week and he was saying they’ve been carving on it and carving on it. I know at one point, it was like a five-hour cut, and they had to get it down to a proper hour-and-a-half cut. But it’s all really good stuff. I’ve seen some clips and it’s going to be great. It’s the most powerful footage you will see of Shannon, because it doesn’t get any more intimate than somebody filming their life.

How would you compare Travis to Shannon?
I try not to. Travis has been in the band now for over 10 years, so he feels like he’s the band. And he has so much respect for Shannon. When we’re working on the old songs, he’s always very conscious of getting them right. He wants them right more than anybody because he was a fan of the band. But Travis has a wicked ass voice; his voice is on fire. He can really sing anything. It’s unbelievable.

Is original bassist Brad Smith still in the band?
Brad is doing Brad for now, that is all I can say about that. We’re kind of working that out right now and he seems to be busy doing other projects. We’re really excited about writing and he didn’t have the time. We just have been writing without him at this point.

What can fans expect at the upcoming NYC show?
We played in Denver and another place in Colorado in October and we started pulling out some deeper cuts of songs we hadn’t played in 15 years. We’re all excited because we’re playing a different set now. We’re playing some songs now that we didn’t even get to play with Shannon…some songs off the Nico record that we never played live. We’re reinvigorated and it feels fun to play some of those older songs we haven’t touched in a long time. And there will be some new songs, as well. We’re going to be releasing a single before we go out on this tour.