There is something about a secret handshake that imparts a sense of invisible power, of having knowledge possessed only a by narrow coterie of those “in the know.” Driving the Nissan GT-R is like that. It’s a rare sports car that is invisible when seen alongside flashy high-performance standouts from Europe and America. Practically speaking, the GT-R is in fact an understated and maybe even pragmatic machine that can, on the right road and in the right hands, mop the floor with most other cars.

For some, the look of Nissan’s GT-R presents a love-it-or-hate-it kind of attraction. Its shape is a complex arrangement of planar surfaces intersecting at odd angles—not a profile that elicits swoons from those seduced by sensuous curves and prancing horses. Rather, its brutalist form speaks to aerodynamic efficiency, which it admirably achieves with a Cd of only 0.26.

Its front recalls a catfish and its rear is as subtle as a Brinks truck’s—which by the way, the Nissan GT is just as solidly built. This is a car that brings to bear the single focus and passion of Japanese engineers who have been honing the production model since it first attacked the tarmac in 2007.

The GT-R—which has earned the name “Godzilla” by a small but near-fanatical following of owners and enthusiasts—is an uncompromising and somewhat unorthodox definition of a sports car. On paper, it’s pretty conventional, placing a front-mounted, twin-turbocharged V6 engine in a boxy coupe that ostensibly seats four. 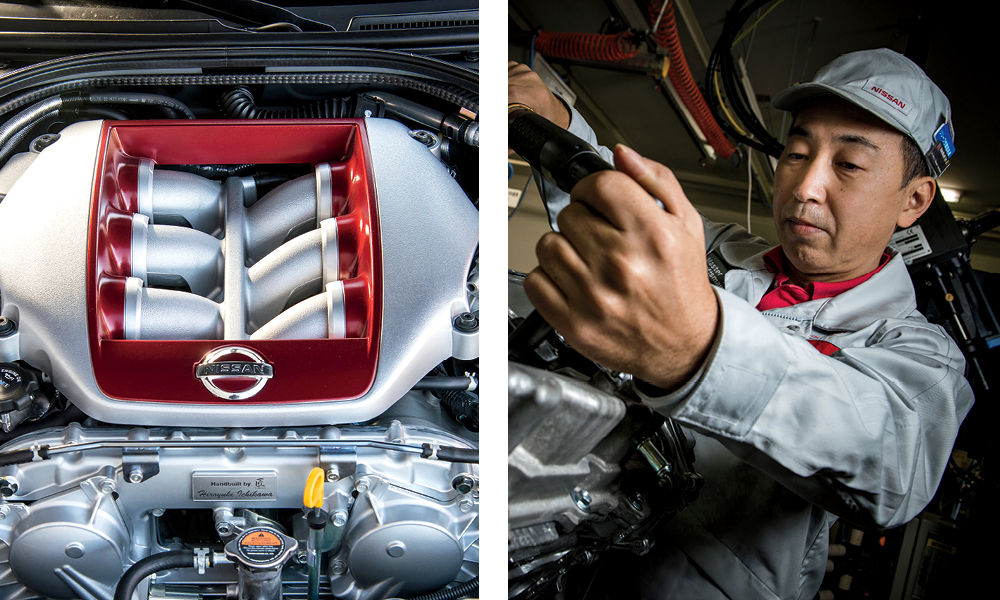 The car’s 3.8L twin- turbocharged V6 engine is positioned far back in the engine compartment to optimize handling and balance. / Each engine in the GT-R is assembled by one of five master craftsmen—called Takumi—at Nissan’s plant in Yokohama, Japan.

But the reptilian devil is in the design details. The chassis, which Nissan calls a Premium Midship Platform, shoves the engine far back near the firewall. Meanwhile the transmission and all-wheel-drive transfer case are mounted right ahead of the rear wheels, resulting in what is essentially a mid-engine layout and more neutral handling dynamics than its 54/46 weight distribution would suggest. Its balance, its flickability, will embolden drivers of every skill level.

The all-wheel-drive system deserves special mention. Unobtrusive, it delivers as much as 100 percent of the torque to the rear wheels, resulting in communicative handling identical to a rear-wheel drive layout that drivers love. But when conditions require, a torque split of up to 50/50 offers maximum traction in inclement weather. All this tech keeps the GT-R from being a lightweight, tipping the scales at a tick under 4,000 lbs.

When it comes to power, it might seem that a V6 engine couldn’t compete in a world of fire-breathing V12, V10 and V8 powerplants. But from the beginning, the GT-R has disabused naysayers of the notion that more is better, producing 565hp—up 20hp on last year’s model—with prodigious torque. Its light and compact 3.8L engine, called the VR38, is a work of art and so over-engineered and barely stressed that some tuners are routinely extracting well upward of 1,200hp from the standard block. 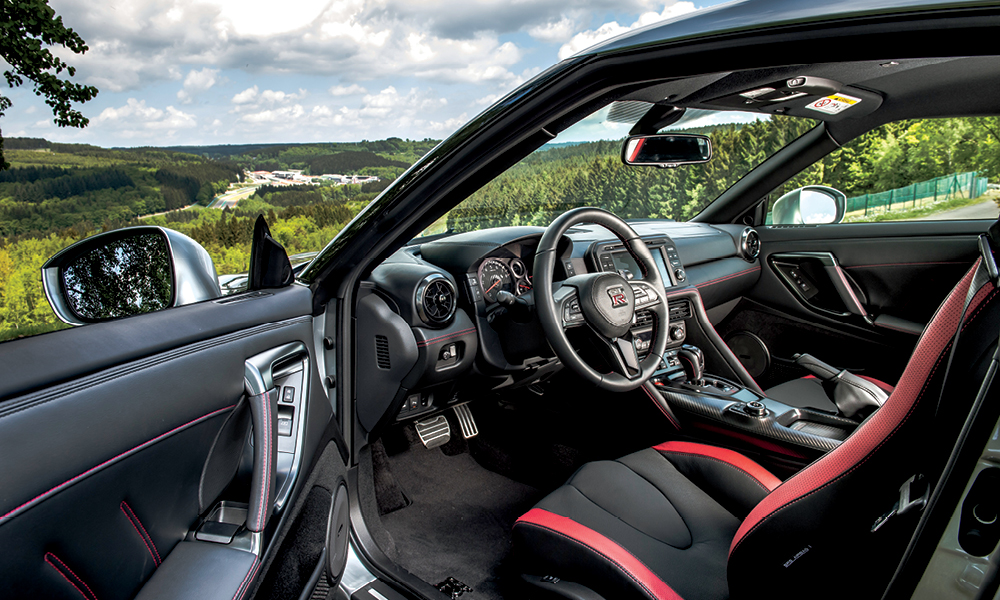 Premium interior packages are available in a variety of colors for $4,280.

Testimony to the seriousness with which Nissan builds its GT-R is that each engine is assembled by one of only five specialists, with that technician’s plaque affixed to the motor. Meanwhile, shifting with the dual-clutch, 6-speed transmission is a dream, with driver selecting between full automatic or paddle-shift manual mode. Flick three console-mounted toggle switches to engage R-Mode for maximum performance and enjoy the quickest shifts and stiffest suspension settings. Normal Mode is for daily driving while Comfort Mode is true to its name. Double-wishbone front suspension and multi-link rear, both with aluminum arms, uses Bilstein DampTronic driver-adjustable dampers at all four corners. Brakes, developed by Brembo, use cross-drilled, full-floating steel rotors with monoblock calipers, instead of the expected carbon ceramics. Wheels are 20-inch, forged-aluminum, one-piece designs with Dunlop SP Sport Maxx tires.

Unlike the irascible mutated dinosaur for which it’s nicknamed, the latest GT-R is a more docile beast that can easily be pressed into duty as a daily driver, especially with Nissan’s liberal use of sound-deadening material and clever noise-cancelling technology that effectively mutes the racket from the vociferous drivetrain. Until recently, such was not the case—previous generations were as noisy as a concrete truck spinning a drum full of ready mix. Still, one derives great pleasure from the handmade titanium exhaust system—with four stout tips the diameter of champagne bottles—though unlike so many of today’s high-power performance rides that drone and wail, the cabin environment of the GT-R is non-fatiguing over long distances and in town. Still, docile daily driving is not the métier of this monster, as exhibited by its frequent appearance on the track where it acquits itself admirably against the likes of Corvettes, Ferraris, Lamborghinis, McLarens and Porsches. 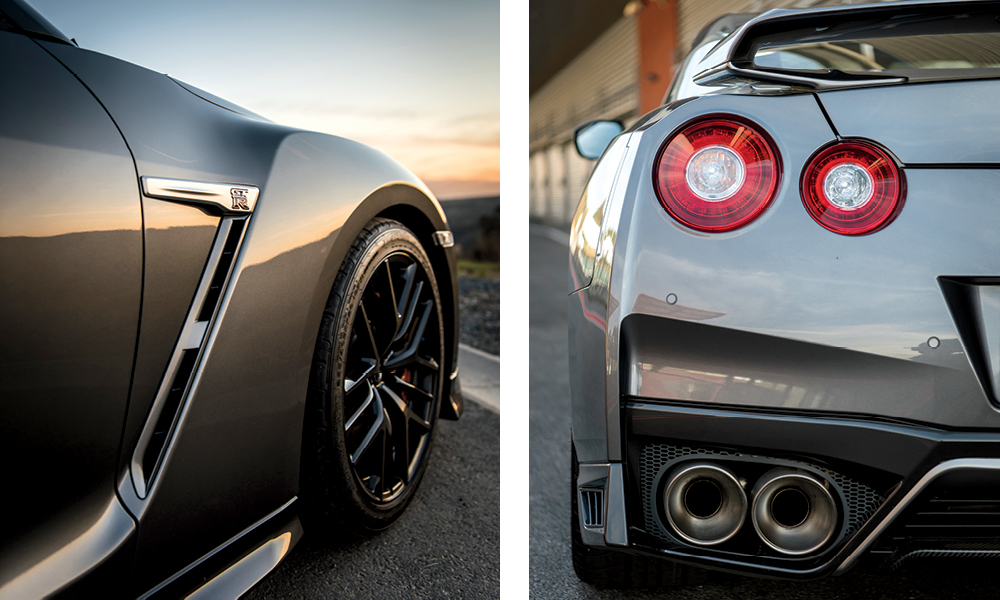 Drivers won’t hear a bit of the engine’s roar with the GT-R’s noise-cancelling tech. / Nissan offers four models of the seventh generation GT-R, each hitting a very high standard of fit and finish.

Nissan offers four models of what is technically the seventh-generation GT-R, ours was the GT-R Premium (MSRP $110,490), about $10,000 more than the Pure model but below the $128,490 Track Edition and the limited-availability 600hp GT-R Nismo at $175,490. Befitting any six-figure automobile, details on the GT achieve a very high standard of fit and finish. Our Premium Interior Package, a $4,280 option, featured perfect black and red leather with impeccable stitching and precision-fit trim. Multi-way power seats are supremely comfortable and the steering wheel and instrument cluster adjust as a unit to ensure the right driving position. A center-mounted, 8-inch touchscreen displays the usual infotainment data but also features a choice of seven custom performance screens that deliver data vitals as turbo boost, acceleration G-force, chassis dynamics and elapsed time and speed.

Performance driving—not impressive numbers—is what the GT-R is all about. In a world jaded by 700+hp cars, its power and torque may not raise eyebrows, but are more than ample, underpinned by massive traction and tenacious all-wheel-drive grip that makes it feel like a car with 150 more horses. Handling is neutral and even, with razor-sharp and instantaneous response to steering input. The chassis feels rigid as a titanium billet. Canyon roads exploit the full measure of the GT-R, but straight-line performance is unholy too: engage R-Mode Start (launch control) and ’Zilla will scorch the earth. While Nissan is not forthcoming with official specifications, independent tests show a quarter mile time hovering just above 11 seconds, hitting 60 mph in less than three. All of which is academic; it’s the tractability of this Nissan that makes it such a willing accomplice for such a wide variety of driving duties. As for value, apart from Chevy’s Corvette, there is no sports car that delivers near-supercar performance capability for such a comparatively reasonable price. Talk about a fair shake.