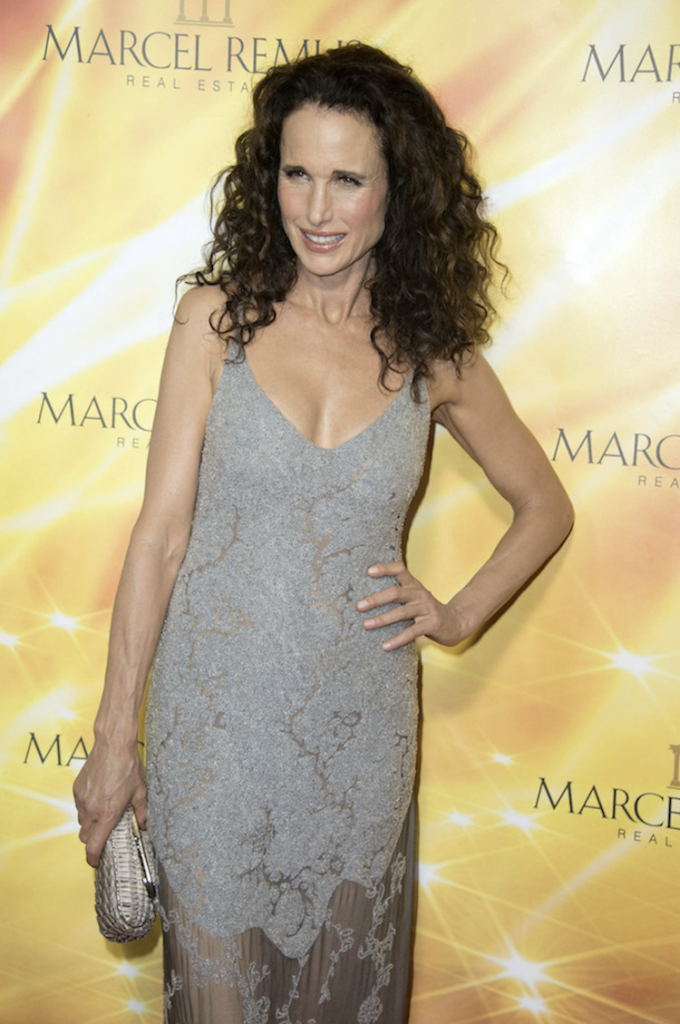 Actress Andie MacDowell’s appeal is in her ethereal glow. From her crown of dark cascading curls to her porcelain complexion and delicate features, MacDowell’s sweet yet sultry sensuality captivated movie-going audiences with hits like Sex, Lies, and Videotape, Green Card, Groundhog Day and Four Weddings and a Funeral. She has always played the woman of great desire who orbits just outside of the male lead’s reach…that is, until he figures out how to win her over.

As Andie tells it, her “it girl” status throughout the late 80s and entire 90s was a thrill ride, but left her feeling torn between an A-list movie career and being a hands-on mother to her three children. It was then she resolved to stop making movies back-to-back and to choose her projects more carefully, kicking the tires first to be sure the role was worth time away from her family.

Over the last 18 years, MacDowell has continued to work steadily, choosing roles that move her, make her think and those that allow her to unpack her more provocative side. In 2015’s Magic Mike XXL, MacDowell played Nancy, the flirtatious older woman who unapologetically has her way with Joe Manganiello’s character. It’s safe to say that at this stage in MacDowell’s career she is doing anything but playing it safe on screen.

In her latest film, Love After Love, MacDowell tackles the role of the beautifully confident Suzanne, a wife and mother of two grown sons (played by Chris O’Dowd and James Adomian). She is loving her life (including her sex life) until her husband’s declining health and his death leaves her and her family reeling with grief, bitterness and fear, as they try to regain their equilibrium.

Andie and I sat down for a frank discussion about growing older in Hollywood, embracing each stage of life, the #MeToo movement and the enigmatic definition of happiness.

What do you think this new decade (she turned 60 on April 21) will bring into your life?
I know what I hope it brings. I would like to do more spiritual work. Go listen to Ram Dass talk, and Marianne Williamson; go to a yoga retreat and cultivate every aspect of myself so that I can continue to work on peace of mind. As you get older, I feel like if you’re going down the right road there is this clarity that you can see in your eyes. It’s a gentleness that is the most beautiful aspect a human can have. That is my goal, to continue to work on that gentle side of myself.

Beyond the need to no longer be typecast, did playing Suzanne in Love After Love allow you to work out events and emotions from your own life? Was it therapeutic for you?
I have such a huge depth of life experience that I haven’t had the opportunity to use on film. I saw so much that I could do with this character. She has all these different parts of herself. She has this lusty confidence; she’s a self-assured woman that’s not ashamed that she had an open marriage. And then she crumbles.

But she is heroic in taking care of her husband, and then devastated at losing him and you then see her destroyed. And then she is trying to start over, and she has that humbling experience of having sex with the person she works with. In the scene where she loses it on the young actress, I really wanted to play that part of things, the ability to be cruel because you’re in pain. We do that as mature women. We’re fed up as mature women and we lash out sometimes. It’s a true moment in the film.

Do you feel a sense of relief that the kinds of roles you’re getting to play now are more character-driven, as opposed to the young female lead that you played in the 90s?
I’m thankful for all the jobs I’ve had, and I’ve gotten to do some great parts. I don’t have any regrets, and I think those roles suited me at that age and time. I think as you get older, you are a character (laughs). You have a lot more depth by the time you’re my age, because you’ve had to struggle. My life has not been a piece of cake. I understand what it is to have a complex life, because my life has been complex. By the time you’re my age, you see things differently and I think you have more to offer in a way.

How do you feel about being cast as Chris O’Dowd’s mother in this film, playing the mother of an adult child?
I am old enough to be his mother. And I just played another character, recently, where I tried to look even older. I don’t have a problem with looking older. I think I can play 10 years older and 10 years younger. At some points in the film I looked older than at other times. I think that happens all the time, in real life too, depending on how you’re feeling. I think when you’re sad you look old. I looked younger in the beginning of this film because I’m happy. And I looked older later in the film because I was damn tired and sad! I think you age like 10 years when you’re that sad.

In your late 20s and into your 30s, you were doing movie after movie, and all eyes were on you. What did that moment in time feel like for you?
Well, I could have done a lot more, but one year I did three movies in a year and I realized that I could not be a good mother and do that many movies. I was so popular, and I was so young, that it was easy. I could usually decide when I wanted to work and go find a job; it was that easy. And I would always try to do one independent and one studio film. That would be my goal each year. Life was great. I have to say it was wonderful to be in that position.

And then you entered your 40s.
Yes, it’s true. People would keep saying to me when I would get interviewed, “How does it feel to turn 40 and know that you’re not going to work anymore?” And it really was…kind of like a light switch.

Even though you still looked gorgeous and had the same abilities.
Even though I looked gorgeous. It gets harder. I never wanted to complain or whine too much because I always thought it was unattractive. I find it really fascinating that women are finally in a place this year where we are no longer seen as whiners. We’re seen as legitimately having a truth to tell that is finally being told.

In the early years of your career, did you ever have a #MeToo moment?
I didn’t ever have sexual problems in the context of my career. I never found myself in any kind of position in this business. I had #MeToo issues, but not in the business. But for me, what I find as relevant and equally as important as the #MeToo movement regarding sexual assault, I strongly believe that this is the first time we have had any voice. Women have always been accused of being too emotional. If you’ve studied therapy, early on, according to Carl Jung, a woman who wanted to be independent was crazy. That’s how far we have had to come.

Just to be independent, not too long ago, we were called insane. There are so many social issues right now that are really important. My hope is that every aspect of how we have been diminished is going to be opened up. People will see and question why they would have to ask a woman the question that they asked me when I turned 40, yet not ask it of a man. It’s important that we take a hard look at that. That cannot be overlooked if we are to finally be seen as equal human beings on this planet.

With Love After Love, you did find a role that shows the complexity of a female character.
I am astounded by this film and this role. And Chris O’Dowd is a great person and very talented actor. I was surrounded by remarkable people.

The question in that first scene that’s asked to your character is, “What is happy?”
That was an honest answer that my character gives, “You can’t always be happy.” A therapist told me that one time (laughs). It was a big revelation.

The title of this film, Love After Love, I feel like it holds a double meaning. Does it mean finding your life after losing love, or finding love again after losing love, or both?
For me it means that love is a complex thing. You can’t fit it all in one place. In this film, it could mean that maybe we all loved him so much that we needed to learn to love in another way. If you don’t have a person in your life any longer, then you have to find your way to loving other people.