There is nothing that travels quite like clothing. Couple this with the resilience of textiles and you have a material that not only travels, but travels well. Its innate portability combined with the curiosity of the human spirit cumulates in the diverse art of patterning cloth that can be witnessed the world over.

It is also at the heart of the earliest of international affairs, very likely the result of interactions occurring along trade routes, most notably the Silk Road. From approximately 120 BC to the 1450s, this vast network connected regions spanning from Africa to Asia. Maritime as well as land travel were used to trade a wide range of goods that included the route’s namesake alongside the exchange of language, culture, aesthetics and skills. Among the myriad motifs of the textiles that traveled these journeys, one stood apart.

Ikat, a term used to describe the technique of patterning cloth by “resist dyeing” selected threads, is a prime example. Resist dyeing refers to any number of ways dye is allowed to color selected areas of a thread or fabric. Tie-dye is perhaps the most familiar: the dye resist is created where the cloth is tied, treating a whole piece. Ikat is the result of a resist technique commonly applied to bundles of threads prior to being woven. It is an elevated art form that could take months to fabricate. The presence of ikat in diverse cultures suggests it was likely developed among these groups in geographic isolation and spread through trade.

Single ikat, where either the warp threads (those held in tension on the loom) or the weft threads (which pass between the warp threads) are dyed before weaving, is the most familiar approach. But double ikat is also possible, demanding mindboggling planning to execute a pattern where both the warp and weft are measured and dyed in advance of weaving, allowing each to align on the loom to create specific patterns. The resist dyeing of each thread ends at a slightly different place than the next thread creating a soft, feathered transition of color rather than a straight line. It is precisely the challenge of alignment in single and double ikat that generates the distinctive feathering effect that attracts many to the one-of-a-kind technique. 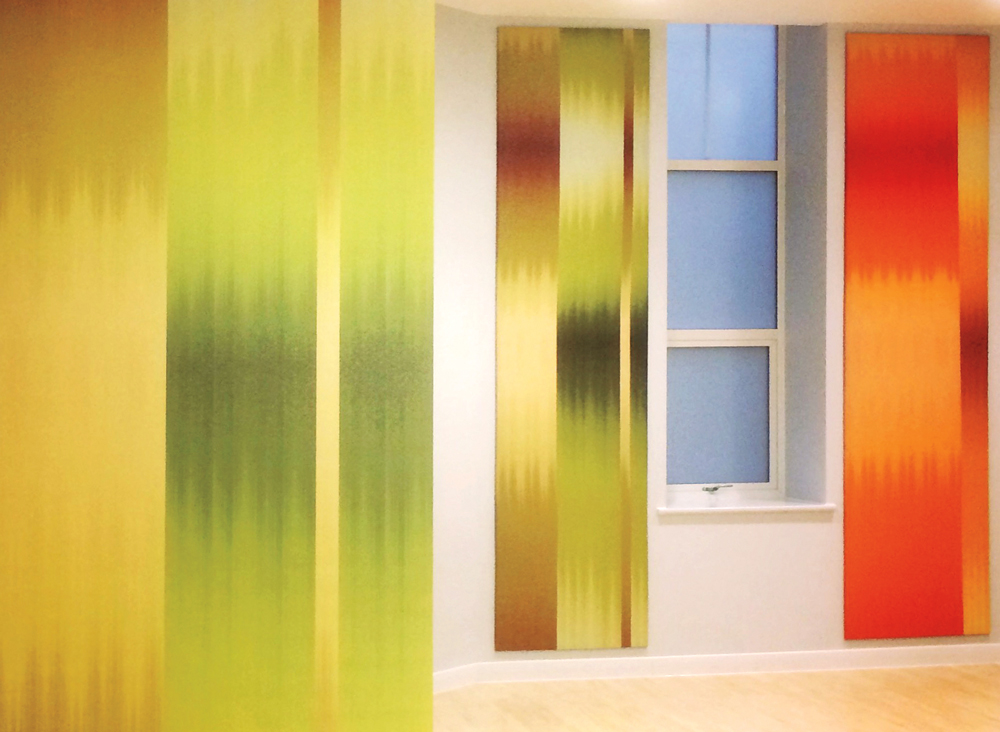 In today’s fast-paced world of high volume textile production, the hand dying and weaving that ikat requires is not easily accommodated. Contemporary artists often adopt strategies that allow their labor-intensive work to be presented as individual one-offs, while also searching for alternative production techniques. Initiatives tasked with preserving the method usually commit to decades of sustaining local weaving knowledge rather than weeks or months simply because of how long it takes to accomplish one piece.

One rare example of commercially produced, hand-woven and dyed ikat is the Adras Ikat by Manhattan-based Bermingham & Co. The collection is woven using traditional methods in the central Asian country of Uzbekistan—one of several parts of the world where ikat weaving has historically thrived. Centuries ago, central Asian courts honored individuals with gifts of the patterned robes. The Soviet era and its anti-decorative ideologies brought an end to thirsty demands for the style—though many whisper about master weavers working in secret during those years to secure its continuity.

The Adrad Ikat collection is woven on a silk warp with cotton weft using the technique of warp-dyed ikat. Skeins or bundles of silk warp threads in six-and-a-half-foot lengths are tied with cotton and dyed. Various sections, dyed in different colors, create the pre-planned pattern on the warp threads which are then woven on a foot-powered shuttle loom. The narrow sections of cloth are stitched together to create larger fabrics as needed.

Bermingham & Co. combines ikat dye techniques with velvet weaving that also has roots in Uzbekistan. Velvet is essentially created when tiny loops are woven then cut to create the distinctive pile surface. The company’s Ala Bahkmal velvet weaving is constructed using two warps, one which creates the strength and foundation and a second that is resist dyed and forms the distinctive ikat patterning. Bermingham & Co. applies this to high-end furnishings including pillows, lampshades and chairs.

Contemporary textile artist and designer Ptolemy Mann’s light bulb moment came in 2009 when she saw the book Undiscovered Minimalism picturing the flat weave rugs of northern Iran. “It looked like my own hand woven ikat work but dates to the 1940s,” she said of the aesthetically sophisticated weft-dyed rugs. Mann’s experience with ikat is broad—ranging from bespoke commissions that are stretched to hang on the wall to the design of high volume bed linen and even color consultancy. 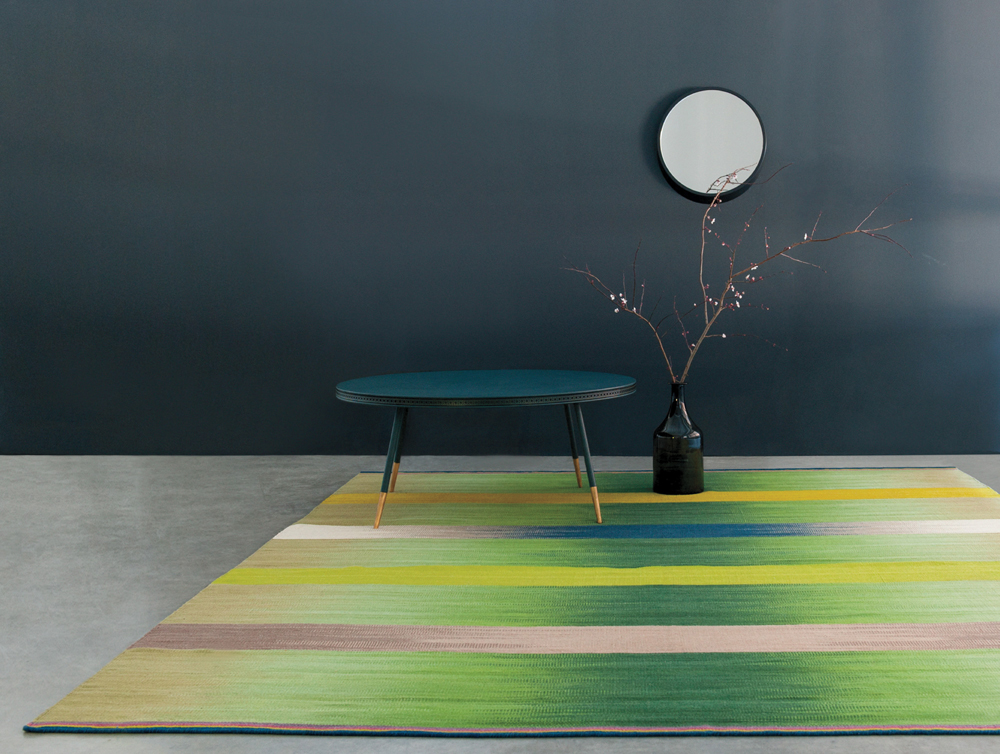 Eventually, Mann began experimenting with more time efficient approaches, such as using digital prints, but she became frustrated by the compromises in quality. For the past four years she has worked with carpet weavers near Varanasi, India, who flat weave her carpet designs. She describes the rugs she has developed as “the closest product I can manufacture that echoes everything important about being an ikat artist…the ikat vibe without doing it.” It’s not that Mann has ever turned her back on hand weaving in 25 years, but corporate commissions began to evaporate following the 2008 economic crisis. In response, her strategy has been to diversify her approach to production while remaining true to what she feels is “the language of ikat.”

One such recent commission was for a multi-faith room at Bristol Royal Infirmary Hospital in England. The modest budget requirements of the project were solved by using digital prints based on scans of Mann’s hand woven textiles. Each length of cloth is suspended from the ceiling and can be reorganized to accommodate different divisions within the space. They are easy to clean (a priority even in non-clinical medical settings) and refer to the qualities of ikat without demanding the same investment in time. And they can pull double duty as functional objects for the floor as well as artwork displayed on the wall.

Artist Astrid Krogh works across a range of materials to create large-scale installations that play with light. Her ikat series uses optic fiber illuminated at both ends to create the distinctive feathering effect not by mixing dyes, but by mixing light. She referred to a 2004 exhibition in Helsinki, Finland, of ikat-dyed Japanese kimono as her original source of inspiration. “I always think textiles when I work with fibers; I think textile traditions…light is like dye.”

Krogh’s interest in ikat lies in the “inaccurate edge to colors,” which she has found in mixing color created by light. Optic fibers act as the warp threads stretched on the loom. Those are woven with a white paper weft, which reflects the light. Each 20-inch weave is then pieced together, similar to the weaving of kimono. When the artificial light sources illuminating Krogh’s weavings are turned off, the entire fabric is white. The feathering of color is caused by the varying intensity of light channeled through the bunches of hollow optic fibers. Greater variation appears toward the edges of each bunch. “I try to let the material itself make the pattern,” she said.

The traditions of ikat are alive today, in part through the restless experimentation of contemporary textile artists and designers. What Krogh described as the “inaccurate meeting of color” is a fascination with the unique technique they share.