Worldwide name recognition notwithstanding, only a handful of nonlocals truly understand Beverly Hills. Beneath the sheen of glamour glistening on the surface of this famously prosperous village are friendly residents who live, work, eat and shop, going about their normal lives. Those expecting—or worse, exuding—snobbery will stand out, and not in a good way.

Though surrounded by microcity West Hollywood on one side and gargantuan Los Angeles on all others, Beverly Hills is politically independent: the City of Beverly Hills. As such, it has its own municipal government, its own police force and, importantly, its own arts programs. Most visitors come from other areas of LA for a few hours of immersion in the thriving shopping and dining scenes, yet a stay of several days in Beverly Hills will reveal a tightknit community under the polished shine seen by daytrippers.

It’s perhaps difficult to fathom given the stereotypes amplifying the supposed superficiality of daily Los Angeles life, but downtown Beverly Hills actually has something of a small-town spirit to it, and the city’s residents are fiercely protective of their quality of life. The dazzling jewelry shops and elegant fashion boutiques of Rodeo Drive are complemented by real-world businesses—within a few blocks of Rodeo Drive are a supermarket, post office, community arts center and a beautiful city hall. 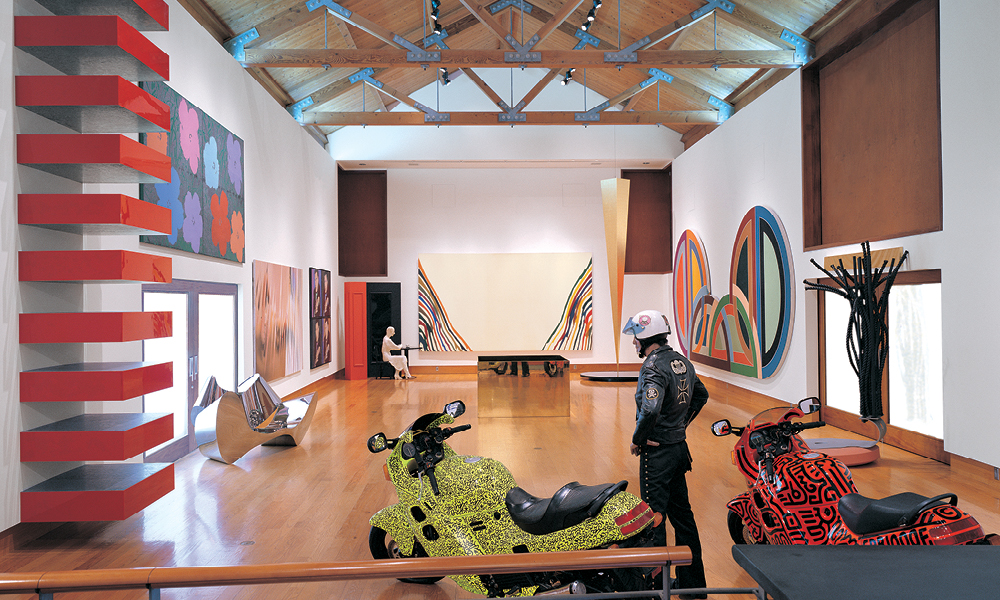 The Weisman’s collection represents one of the world’s most impressive private compilations of modern art.

Also calling the city home are some impressive sights well worth seeing, a few of which are in fact located in former homes that have become stimulating places. Step into the Frederick R. Weisman Art Foundation and step into the world of Beverly Hills never seen by window-shopping tourists. This former residence houses the collection of fabulously wealthy businessman Fred Weisman, who amassed such a vast compendium of 20th-century art that he had to abandon the house to his artworks and move into another home down the street. His legacy is one of the most brilliant private assemblages of modern art in the world. The fact that the works are displayed in situ just as they were when Weisman was in residence only adds to the enjoyment of seeing masterpieces of painting and sculpture integrated into the daily life of a true patron of the arts.

Among the hundreds of priceless works by such luminaries as Cézanne, Lichtenstein, Picasso and de Kooning is a scale model of Mr. Weisman’s private jet—rendered a work of art both inside and out—and his set of ties painted to match various works of his collection. It’s always nice to see the intersection of money and imagination, perhaps best embodied by the bronze floor lamp that demands a double take when visitors realize the profile cleverly outlined by the edge of the lamp’s base is that of Weisman. Today, the activities and management of the Weisman Art Foundation are supervised by his widow, fine arts conservator and curator Billie Weisman—a genteel, intelligent and gracious woman who perfectly personifies the quintessence of Beverly Hills.

As did Virginia Robinson in her day. What the Weisman Foundation is to art, the Virginia Robinson Gardens are to botany. The Robinsons of department store fame (and wealth) were the first people to build an estate in what was at the time a set of barren hills far from downtown Los Angeles. After a wrong turn took them to the highest of the hills and inadvertently presented them with expansive views to the Pacific Ocean, the Robinsons immediately inquired about purchasing the land and set about building a lavish home surrounded by lush gardens. 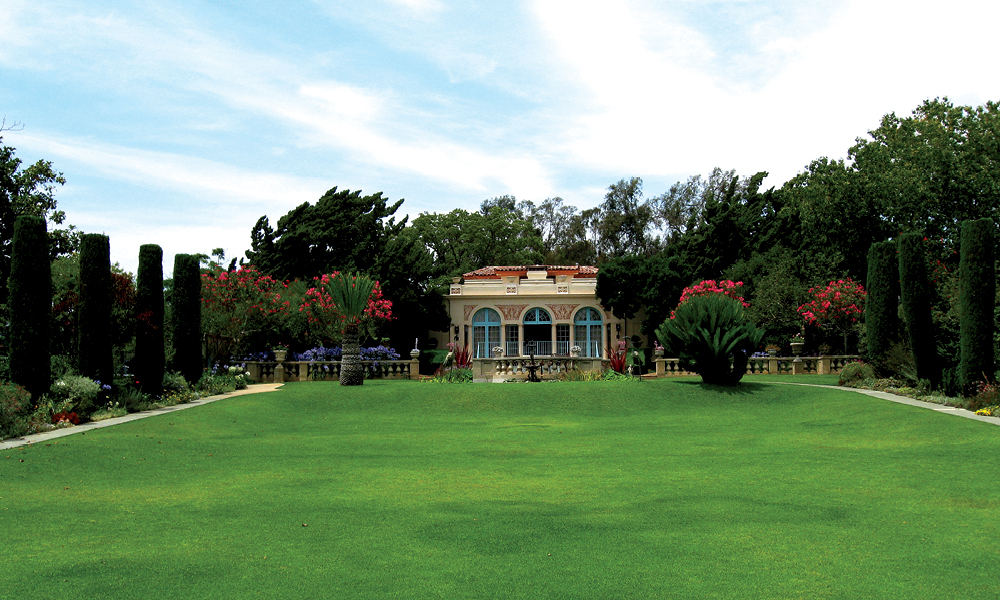 Located on some of the world’s most expensive real estate, the Virginia Robinson Gardens are to botany what great museums are to art.

A six-acre tract is all that remains of the original estate, yet the property is still considered enormous in one of the most expensive real estate markets in the world. When first married, Virginia and her husband Harry took a three-year honeymoon, traveling the world and acquiring a diversity of plant specimens along the way. These plants and trees were the basis for the gardens seen today. The house is still very much as it was when the Robinsons were in residence: there is a pool, pool house, tennis court and outbuildings for servants in addition to the main house, now preserved as a museum with the family’s original furnishings still in place to evoke a glamorous era in Beverly Hills history.

Both the Weisman Art Foundation and the Virginia Robinson Gardens are located in residential neighborhoods where their discreet façades belie what exists behind them. The same can be said about the Four Seasons Hotel Los Angeles at Beverly Hills, a hotspot of celebrity activity. Much goes on behind the walls of this discreet hotel, a favorite for press conferences and other entertainment-industry events. The stars enjoy the homelike environment and casual but friendly professional service both in the hotel and its excellent Italian restaurant Culina. When the cameras and microphones get to be too much, a biomeditation therapy is a welcome respite from the hubbub. The Four Seasons is home to many works of modern art, including a Henry Moore bronze in its garden; indeed, Beverly Hills has several Moore works on public display in various locations around town.

Unlike the Four Seasons, the façade of the legendary Beverly Wilshire is somewhat more revealing. The hotel’s unique architectural style has made it a tourist attraction for more than 90 years. On the other side of that formidable exterior is a palace of luxury where a team of polished professionals create the absolute best experiences possible for in-house guests and local clients alike. Guests who stay in the recently renovated suites will enjoy expansive spaces and stylish décor unmatched anywhere else in the city. Knowing that it attracts a moneyed clientele, suites of various sizes and configurations constitute more than one-third of the hotel’s 395-room inventory. 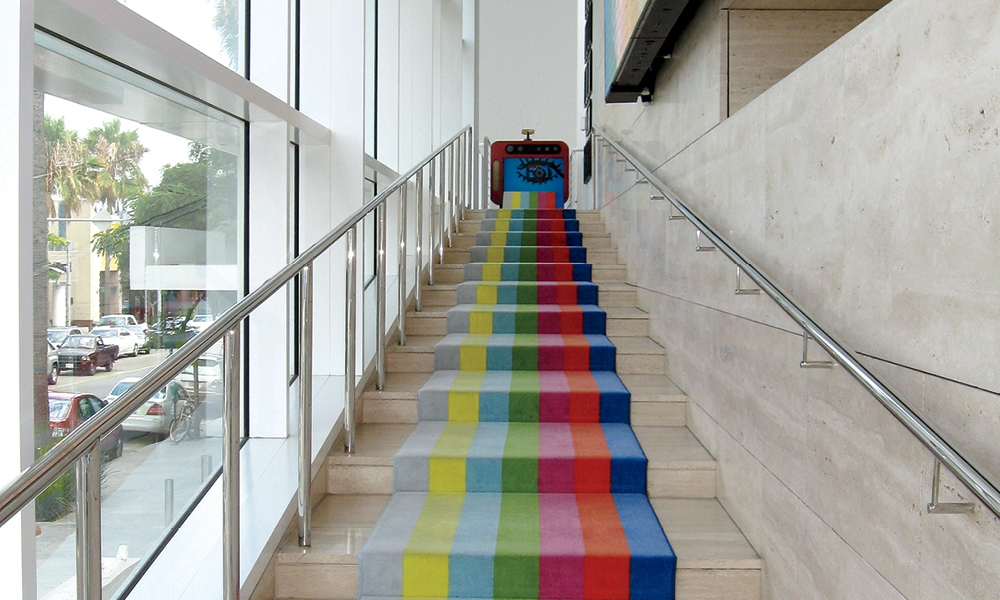 The end of the rainbow lands on the Paley Center For Media, which brings the entertainment world to the public through cultural programs, exhibits and industry meetings.

Dining at Beverly Wilshire, also a Four Seasons hotel, is a special event for visitors. Under the aegis of legendary chef-phenomenon Wolfgang Puck, CUT takes the standard steakhouse experience and transforms it into something extraordinary. When guests are looking for some retail therapy, Beverly Wilshire’s location at the foot of Rodeo Drive puts a shopper’s dream of dazzling boutiques within easy walking distance. The hotel’s house car can take them further afield anywhere in Beverly Hills. Beyond Rodeo are numerous other streets where meanderings will reveal art galleries, cafés and the first Sprinkles Cupcakes ATM (at 9635 South Santa Monica Boulevard) for those of us who need access to masterpiece cupcakes around the clock.

Not many people are aware that Beverly Hills is an oil town, but a rather surprising source of income for the city is petroleum. Visitors rarely register the several large, windowless towers on the city’s periphery that conceal oil derricks extracting black gold from its source directly under some of the most expensive real estate in the world. One of those towers, under flowered camouflage on the grounds of Beverly Hills High School, has been a source of royalties for the school for decades. 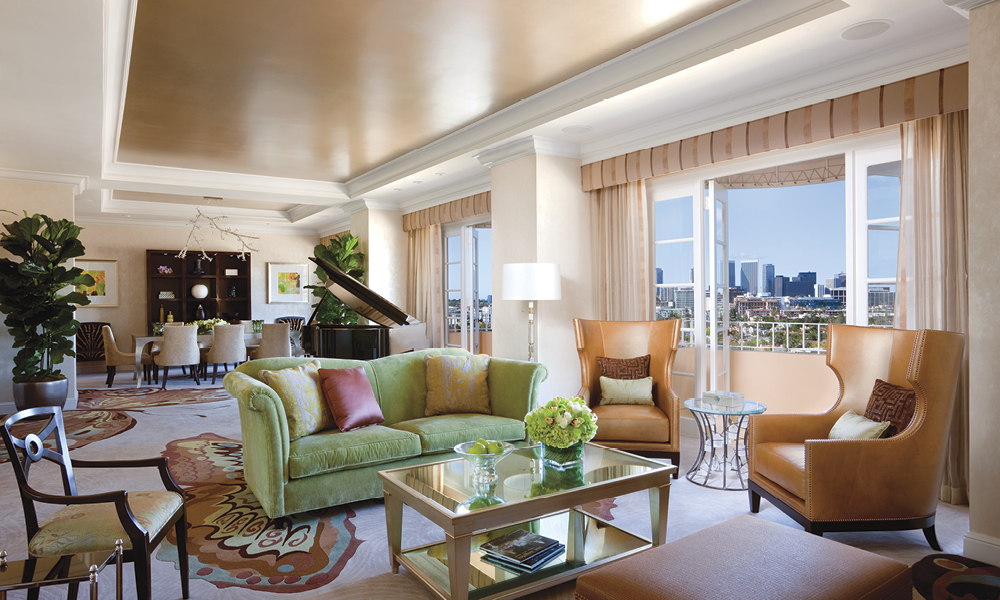 The Presidential Suite at the Four Seasons Los Angeles at Beverly Hills is a paragon of Hollywood décor.

In a city where the entertainment industry is also a major provider of wealth, it comes as no surprise that the performing arts are well appreciated by the residents. At the Paley Center For Media, numerous cultural programs bring the world of entertainment to the public while also providing an important forum for innovative exhibits and industry meetings. Membership entitles visitors to several activities, including access to the vast repository of video history both at this location and its sister location in New York (originally known as the Museum of Broadcasting). For major presentations, the Paley Center’s screening room showcases a series of film and television showings accompanied by discussions led by directors, producers and stars of the material shown. Live theatrical performances have also been part of the scene since the opening of the stunning Wallis Annenberg Center for the Performing Arts, which cleverly incorporates the historic Beverly Hills Post Office building into a multiuse complex right in the heart of the city.

A new institution will soon complement the Paley Center’s role in showcasing the cinematic arts. Surprising though it may seem, The Academy of Motion Picture Arts And Sciences currently has no museum of its own. This status will change when the long-awaited Academy Museum of Motion Pictures opens the doors of its Renzo Piano-designed building in 2019. 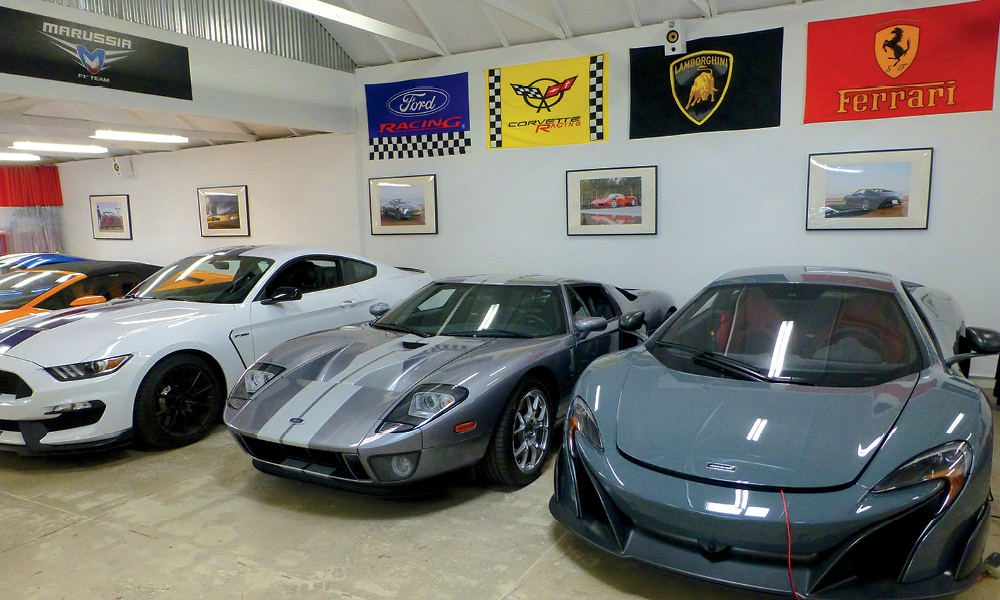 Fast Toys Club offers a wide range of supercar rentals that will have you looking like a Beverly Hills native.

In comparison to this newcomer, the Greystone Mansion has long been a favorite destination for movie history buffs. Having been featured in countless film and television productions, the grand 1928 Tudor-style mansion is now the central feature of a public park owned by the City of Beverly Hills. Motor enthusiasts flock to see the fine examples of automotive design during May’s Greystone Mansion Concours d’Elegance, but even without a special event taking place, the park is an evocative place.

If the preference is to be behind the wheel of an exceptional vehicle rather than looking at one, Fast Toys Club can make that happen. Fast Toys Club, a private club based in LA that provides supercar experiences for its members, offers the ultimate driving experience both on the road and the racetrack. Out of town visitors are welcome to rent cars by the day from the Club’s impressive inventory of exceptional automobiles. If living the Beverly Hills dream includes a Lamborghini, Ferrari or Rolls-Royce, Fast Toys Club can make that dream come true. After all, a polished shine can be fun, too.