Lee Skolnick follows nature’s lead. His architectural designs are a fluid conversation between buildings and landscape—the latter respectfully informing the former from the beginning of the process through to the final detail being set in place.

This North Haven artist studio and residence typify his aesthetic—uses of natural materials crescendo inside the compound, designed around the needs of its inhabitants: Skolnick’s longtime friends, artists April Gornik and Eric Fischl.

The wooded property surrounded by Fresh Pond and its marshland are part of the overall design. “I take a lot of my inspiration from Japanese architecture, buildings and homes—especially temples and shrines,” Skolnick explained. “They frame the views of the landscape, and it is almost as if the purpose of the building is to make you appreciate the landscape even more because it frames it in such a way that they look like artistic compositions.”

The 11,000-square-foot, three-bedroom, six-bathroom home is composed of three pavilions: two studios and the residence. Each one is constructed with a modern, minimalist approach and an emphasis on simple rectangles. “There is a modern style that people are familiar with which is kind of boxy and rectangular, and some people think it is cold—it is definitely not that. The very traditional shape, like a house, actually refers to ancient shape of temples, like Roman temples…They have this formal façade.” 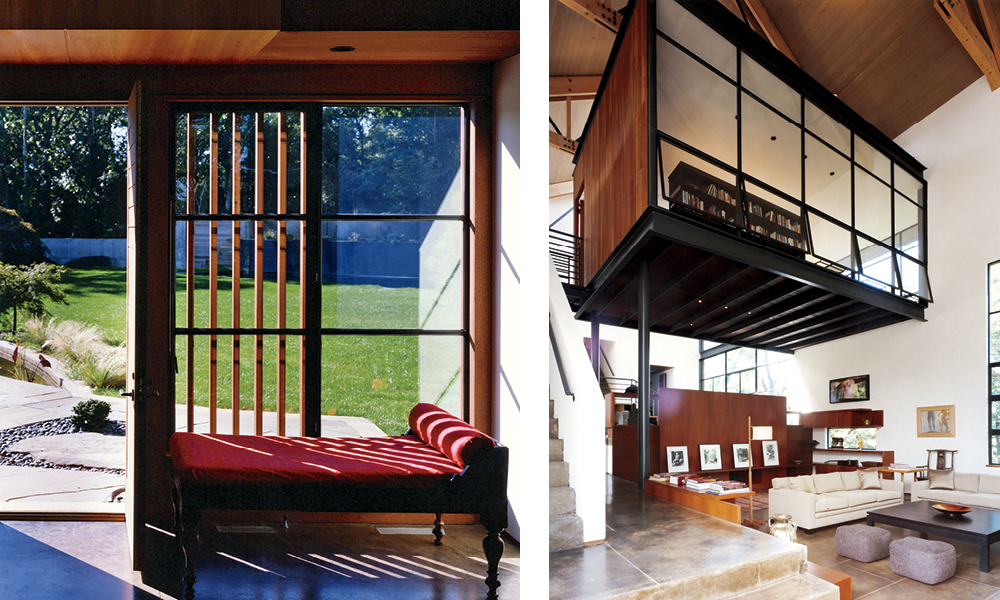 The modern, minimalist home exphasizes the simplicity of rectangles. / A glass encased library is suspended from the living room ceiling. image: robert polidori

It would be ridiculous to imitate the ornamentation of ancient monuments within the setting of the Hamptons. And Skolnick does not. He instead goes for what he calls “central modernism” to embrace intimacy and nature in a modern arrangement. “We created a journey from the front door,” he explained. A series of semi-detached, multilevel stucco pavilions follow. Two 1,800-square-foot artist studios are at the forefront of the home. “The studios create a very formal façade for the whole compound, and it also celebrates the fact that these are two very serious, accomplished artists. You don’t even get to the house until you first encounter the studios.”

Between them, an enclosed pathway leads to an outside courtyard where an effluvium recirculates rainwater—an enchanted entry to the open and airy main residence, which is upward from the other pavilions. Concrete stairs wind up and down in a grand, spiral-like pattern that connects the multiple levels. “You really feel the flowing space, descending in the clockwise direction all through the main levels of the house. If you think about the Acropolis, all of the pavilions, all of the temples—each one of them is on a different level. But when you move through the site it’s very gentle and natural.”

The entry is on the middle level, the living room is a step down—but none of the levels are subterranean. “We sculpted the ground so that every one of these levels always appears to be at the level of the ground outside.” The dining room and kitchen are another few steps down. Because of its consistent grain and color, hard pinewood is used to accent sky-high ceilings throughout the residence. The kitchen cabinets are made from the same wood, and the counter shares the same polished concrete treatment as the floors, though in a slightly lighter pigment. 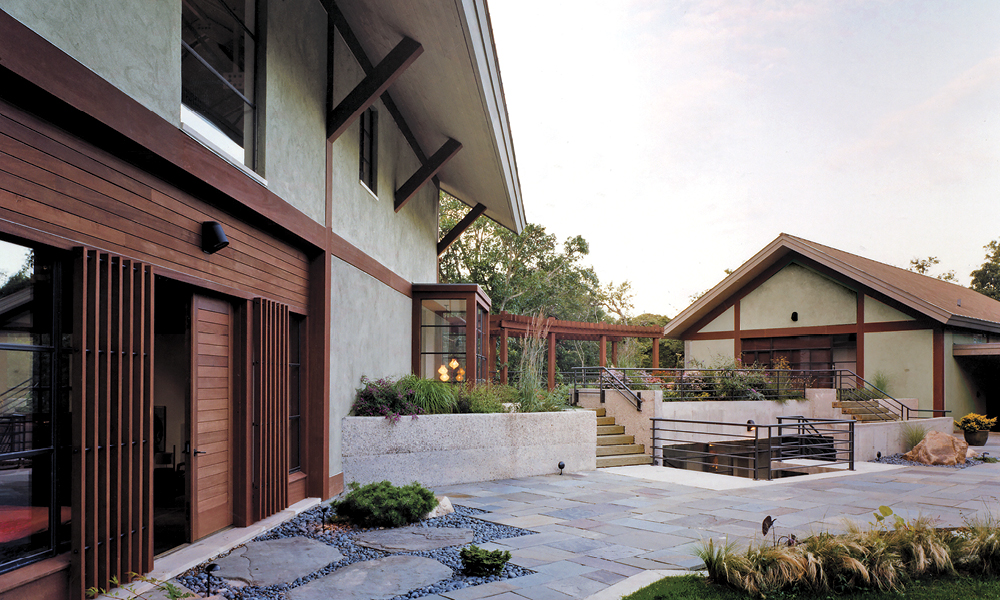 The third pavilion housing the living and sleeping quarters is set back from the two studios.

Built-ins are another hallmark of the design. Skolnick used functional elements such as the cabinets and staircase to dictate flow without erecting walls. “I always loved the open space and not creating closed rooms with doors. I think about these spaces as interior landscapes.” But all good things must come to an end, if nothing else than to clearly mark a beginning. In this case, the end of the open floor plan comes another flight down, at the doors of the two guest rooms, somewhat tucked away from the daily usable space. The master bedroom, on the highest level of the entire home, is outfitted with a screened-in sleeping porch for relaxing on warm summer nights when only a ceiling fan is needed.

The crescendo is the home’s floating glass library. The ultimate place of solitude and reflection is suspended above the living room, thrusting out from a wall of the house to hover over a hidden pond. “Because of all of the levels, by the time you got into the living room we ended up with a very tall [ceiling]. We wanted something that would add more intimacy—a human scale.”

The library solved two design “wants” with one move: creating a sanctuary feeling and the surreal experience of hovering above nature. Antique cast iron bookshelves and a simple French school desk with a tilted table and an attached bench complete the cozy space.