It’s 3am and the city that never sleeps is awake, but lethargic. Sandy Ingber however is alert and razor focused as he scours the Bronx’s Fulton Fish Market, procuring the freshest seafood in town. At 5am, he drives to his restaurant. As most of New York’s working-class denizens emerge from their comforter cocoons, Ingber prepares for the same job he’s held for the past 21 years: executive chef of the Grand Central Oyster Bar.

Ingber got his start flipping burgers in North Carolina at age 16 and progressed through the kitchen ranks. After graduating culinary school, he got a job at a brand-new Colorado seafood restaurant. “It was called Pelican Pete’s,” the Plainview resident recalled. “The owner was a pilot. He had a fish market and flew in fish from both coasts. Boulder is a very sophisticated town and people who live there are from both coasts and love seafood. He had this wild idea: ‘Let’s open a restaurant and we’ll feed the restaurant from the fish market.’ It did fantastic.”

After three years, and saltwater now entrenched in his veins, Ingber relocated to his wife’s native New York. After a series of jobs that ranged from corporate cafeterias to a Northport seafood restaurant, he received a call from an old colleague asking him to meet the Oyster Bar’s general manager. 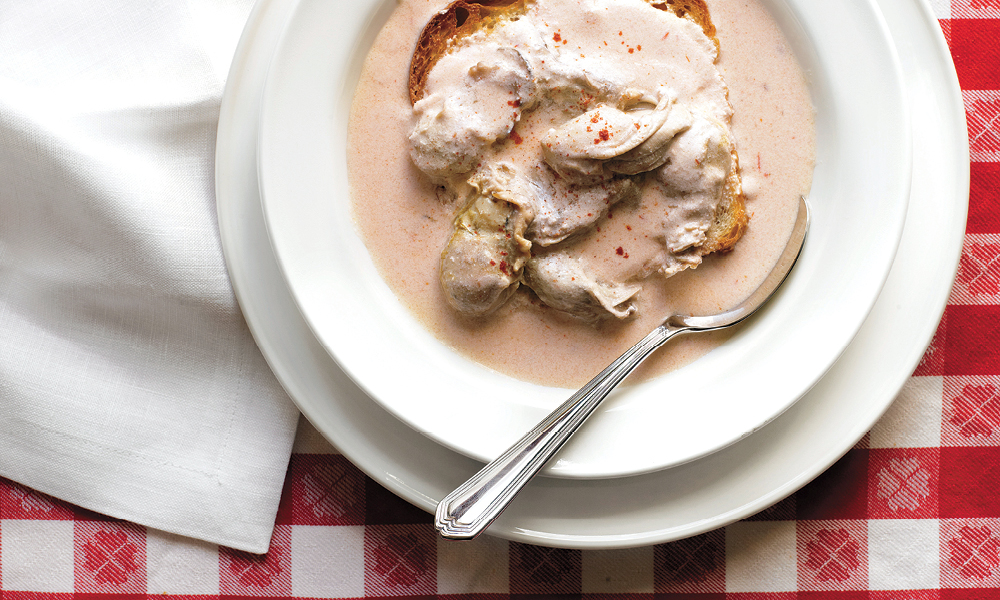 Ingber’s start wasn’t as the chef but as the buyer, combing the Fulton Fish Market just as he does today. “I helped out. If people were sick I would jump in the kitchen. In ’96 my manager came to me and said, ‘We hate our chef. We want you to be the chef. We know you can do it. We love the idea of having the fish buyer and the executive chef as one person.’”

The decision to combine positions proved ingenious. Oyster Bar’s history—it opened more than 100 years ago—helps its cachet, but history alone doesn’t fill the seats. People keep coming back for the food, and no matter what Ingber does, he can’t save a bad piece of fish. “We have one of the largest varieties of fresh fish anywhere. We’re all about fresh.”

This motto extends to the Oyster Bar’s eponymous product, which Ingber serves year-round despite the myth that surrounds them: only eat oysters in months containing the letter “r.” Oysters spawn in warm water and “spawning oysters, they’re not harmful, they just don’t taste good, they’re not palatable.” This relegates local oysters to cold-weather food. But Ingber claimed the “r myth” isn’t true anymore.  With a little imagination and airfreighting, product from the other side of the world can make its way to seafood hungry diners anywhere. “There are so many oysters available. They all spawn at different times and they’re all delivered so fast that I could still put 20 to 25 varieties in the summer.” At any point in time, the Oyster Bar has product from as close as the Great South Bay to as far as New Zealand.

But Ingber isn’t just a glorified oyster shucker. He concocts a daily menu of seafood delicacies from espresso-ancho grilled Key Largo Mahi Mahi to fried Louisiana catfish over cheesy grits. The opportunity to create dishes by curating the best products on the Eastern seaboard makes each seemingly similar day unique—and a 3am call time feel like Christmas morning.