Long Islanders have the luxury of living in the shadow of the greatest city on Earth. It’s just a quick jaunt by rail or road from world-class watering holes, award-winning eateries and trendy hotels. But oftentimes there’s no reason to head west at all. The hotels around these parts are enough to keep visitors on-site for a relaxing night in. Check out three of Long Island’s best hotel bars that expertly blend inventive cocktails with impressive interiors.

The Movie Bar Room at The Gallery Hotel, Greenport

Art lovers will feel right at home at The Gallery Hotel, located on lively Main Street in the heart of Greenport. With just 10 rooms in total, the eccentric getaway is part hotel, part contemporary art gallery, featuring a collection of works from international artists. Think of it as a post-hipster hideout with a mid-century modern flair. The hotel’s colorful KonTiki restaurant, open Memorial Day through autumn, serves up eclectic Asian fare, and is the perfect spot to order a coconut cocktail or tropical tiki libation. Film buffs won’t want to miss the onsite Movie Bar Room, complete with a stocked bar and projector, allowing guests to screen their favorite movies from Netflix or Apple TV. Address: 441 Main Street | Phone: 631-477-4000 Click to go 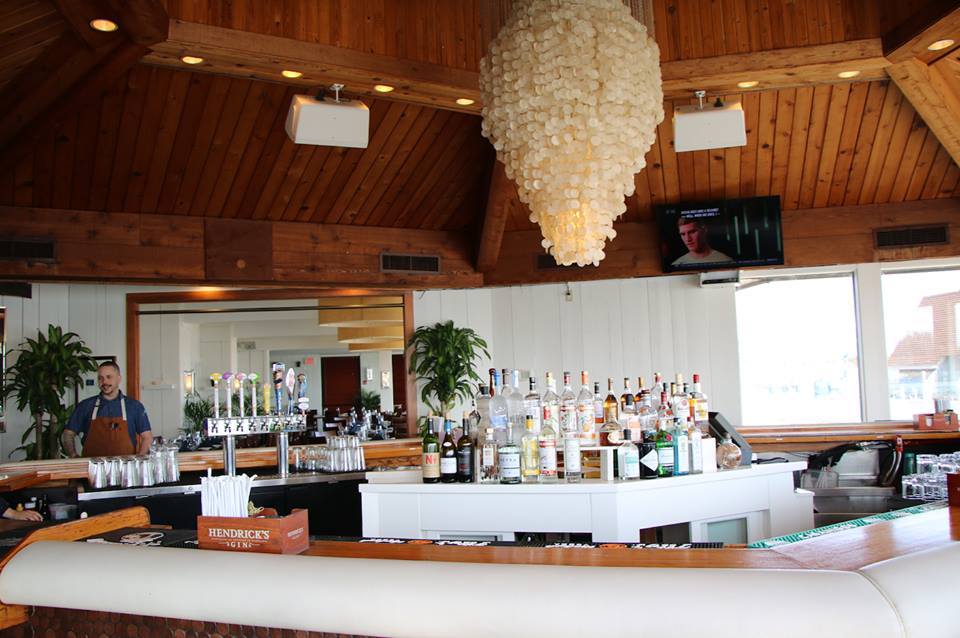 The Montauk Yacht Club Resort & Marina is an award-winning hotel that has been enchanting guests for nearly a century. The oceanfront property is revered for effortlessly capturing the ease of Montauk living and translating it into an unforgettable experience. Here, adventure and relaxation are alive and well, as evidenced by the epic, waterfront lounge. Stirring up the essence of “Old Montauk,” B-Bar recalls Montauk’s rum-running past with authentic South Fork accents, sweeping outlooks and killer cocktails. After spending a day out on the beach or in the waves, pull up a seat at the oval-shaped bar and imbibe a refreshing rum-forward creation. Address: 32 Star Island Road | Phone: 631-668-3100 Click to go

Boutique properties don’t get more charming than Jedediah Hawkins Inn. Nestled on Long Island’s North Fork, the inn once served as Captain Jedediah Hawkins’ home, tracing its roots back to 1863. Surrounded by 22 acres of farmland and fragrant gardens, the retreat is known for its rustic charisma, hospitable staff and mouthwatering fare that pays homage to the East End’s rich agricultural spoils. According to local lore, Hawkins was an abolitionist and used the inn’s legendary Speakeasy as a stop on the Underground Railroad. Other stories claim he was a gunrunner, which may justify the space’s secret passages and trapdoors. Whatever the explanation, today The Speakeasy provides a cozy refuge, featuring flagstone walls and old brick and timber from the barn. Order a glass of merlot from a nearby winery or a concoction highlighting a local spirit. Address: 400 South Jamesport Avenue | Phone: 631-722-2900 Click to go