Years in the industry:
16

First time working behind a bar:
In my 20s, at a dive bar in Flushing, Queens, aptly called the Golden Age.

Favorite thing about working behind a bar:
Getting the opportunity to serve happiness in a glass.

Describe your drink-making style:
Light and refreshing with a lot of fruit and infusions. This is a kosher steakhouse, so what we can’t serve here we make in-house. You think of the classics when you think steakhouse cocktails: martini, Manhattan, old-fashioned. Conceptually, these drinks are similar to traditional steakhouse fare: simple, big, straightforward. But we offer a diversified menu; we have a huge sushi component, for example. Our cocktail list reflects the modernity. My team and I try to put updated twists on classics by incorporating produce that the kitchen works with and dabbling with creative techniques such as smoking.

Define the perfect cocktail:
Anything balanced.

Favorite drink to mix:
Sidecar. A friend and former bartender really worked me hard when I first started bartending. I think he made me make at least 300 Black and Tans before I got the ratios to his liking. But it really prepared me to focus and work hard behind the bar. Sidecar was the first classic cocktail he tested me on.

Most underrated ingredient:
Giffard Crème de Pamplemousse Rose, a great French grapefruit liqueur. I always keep a few bottles in my home bar. Fun to say, fun to look at, fun to play around with.

Weirdest drink request you’ve ever gotten:
Vodka, but only because the woman added the pink lemonade mix she had in her purse.

Weirdest cocktail experiment you’ve ever attempted:
I once tried making a cinnamon chamomile-infused tea cocktail with vanilla and whiskey. It ended up tasting like Big Red gum. Yuck.

The best piece of bartending advice you’ve ever received:
It’s bad luck to give an even number of olives.

If you were a cocktail, your name would be:
Young Asia. A coworker gave me that nickname because I look much younger than I am.

One thing you wish would disappear from drink lists forever:
Rose’s lime juice. Just squeeze your own limes!

If you could mix a drink for any person, dead or alive:
I had the pleasure of doing so for Kevin James and his beautiful wife and friends, which was awesome. But to answer the question, it would be my grandmother. She passed away almost 15 years ago. If she could see me now making people happy, I know she’d be so proud.

Favorite thing to do when you’re not drinking or making a drink:
Eating!

Your favorite bar and why:
Ichi Cellar in Koreatown, Manhattan. They have a huge buffet upstairs and near the entrance there’s a hidden door that leads you to a cellar with good booze and a dance floor to shake off the calories you just devoured. I told you I love to eat.

Best thing you ever drank:
Coconut smoothie from a night market in Thailand.

The worst thing you ever drank:
I once lost a bet playing cards and had to drink a half-cup of instant ramen mixed with mayonnaise, mustard and soy sauce. I can no longer look at instant ramen the same.

First time you got drunk:
When I was in high school, a bunch of my girlfriends and I went to a karaoke room and ordered a bottle of Johnnie Walker. We passed around the garbage pail more than the mic.

After your shift, you drink:
An old-fashioned with Bulleit.

One weird thing we should know about you:
In college, a personal trainer friend and I thought it would be fun to make a bunch of YouTube videos tracking my progression throughout the training for “newbies” at the gym. We were only able to get up to stretching before we decided it wasn’t meant to be. I’m not really a gym person. Also, we got kicked out for filming in the university’s gym. Now my gym is behind the bar. Shaking and stirring gets you those cuts!

The last text message you sent:
“What time is dinner?” 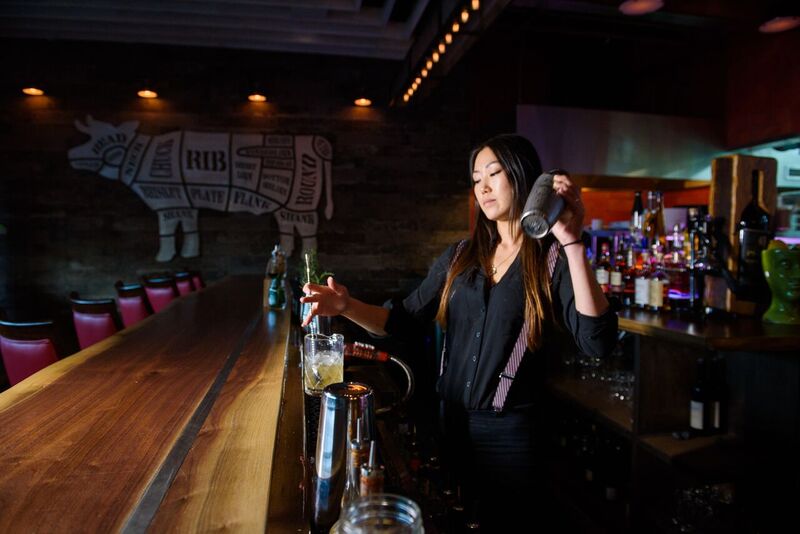 I know a lot of people, including myself, are waiting for those wonderfully long summer days. Seriously: When is this winter going to end? Here, my inspiration was a hot, sticky, hazy summer in the South. Hazy led me to smoky. Smoking cocktail glasses provides an enticing look and adds character and complexity that can turn a cocktail you’ve had a million times into a distinct drink. It’s almost theatrical; smoke has the ability to dazzle eyes, noses and taste buds. Different wood chips will each produce their own essence and affect the overall flavor profile of your cocktail. For this, I was inspired by a classic feel-good Southern food: pecan pie. Furthermore, what spirit plays well with smoke better than bourbon? The pecan and woody, campfire notes combined with vanilla and apple flavors creates an elusively smooth, spicy, fruity drink. The elderflower syrup acts as a light sweetener adding floral notes, and the orange bitters gives a vibrant zestiness.

1) Chill a large snifter glass in the freezer, at least 15 minutes ahead of time.
2) Muddle the thin apple slices in the bottom of a mixing tin.
3) Add the rest of the ingredients and ice, and shake until chilled.
4) On a cedar grilling plank, spread out pecan wood chips. Using a handheld torch, carefully light the chips. Once heated and burning, cup the snifter over the flame to trap smoke. Let smoke diffuse for 5 to 10 seconds, then release.
5) Double strain into the snifter over ice and garnish with thin apple slices soaked in vanilla-infused vodka.

Fill a large container with water, lemon juice and elderflower blossoms (prior, shake gently to remove dirt and bugs, and trim the stems away), and let sit covered for one day. Fine strain into a small saucepan over medium heat and bring to a simmer. Add sugar and stir until thoroughly dissolved. Allow to cool uncovered in the refrigerator. Bottle and store in the refrigerator for up to two weeks.

Infuse bottle of vodka for approximately 24 hours with vanilla bean and orange peel, then strain and rebottle. Combine apple slices, one cup of infused vodka and ginger ale (to keep apple slices from browning) in a medium glass bowl. Let sit for one hour before removing the apple slices.