Everything old is new again, and train travel is no exception. Although it may seem reminiscent of a bygone era, there’s no denying that this mode of transportation from yesteryear has made its comeback in a big way. From over-the-top, multi-day itineraries to quick, budget-friendly retreats, there has never been a better time to discover the country by rail. The next time you’re planning a domestic getaway, consider exploring one of the nation’s most scenic train routes. Needless to say, they’re a far cry from the daily commute aboard the Long Island Rail Road.

Related Content: Motels Are Having a Moment—and It’s Marvelous

Escape the hustle and bustle of New York City with an 11-hour journey to the tranquil shores of Lake Champlain. The Amtrak Adirondack train snakes its way from the Big Apple through a kaleidoscope of colors before arriving in the enchanting metropolis of Montreal. During the trip, passengers can anticipate plenty of historic destinations like Albany, Saratoga Springs and the Hudson Valley’s lush vineyards. There’s also no need to stress about leaving your four-legged friend at home since the Amtrak Adirondack is a (Wi-Fi enabled) pet-friendly operation. Plus, who wouldn’t love to add another international stamp to their passport?

Embark on a unique adventure through the Wild West aboard Cumbres & Toltec. The coal-fired steam engine is a registered National Historic Landmark with roots dating back to 1890. This 64-mile day trip weaves its way from New Mexico to Colorado through steep mountainous passageways, verdant pastures and expansive desert lands. The scenery is even more impressive from the lavish accommodations of the train’s deluxe parlor car, which was inspired by the elegance of England’s Victorian era. Book a trip in May to witness the multicolored splendor of blooming wildflowers, or catch a ride in October for an unforgettable leaf peeping pursuit, marked by canopies of crimson, gold and burnt sienna.

Anchorage to Fairbanks on The Denali Star 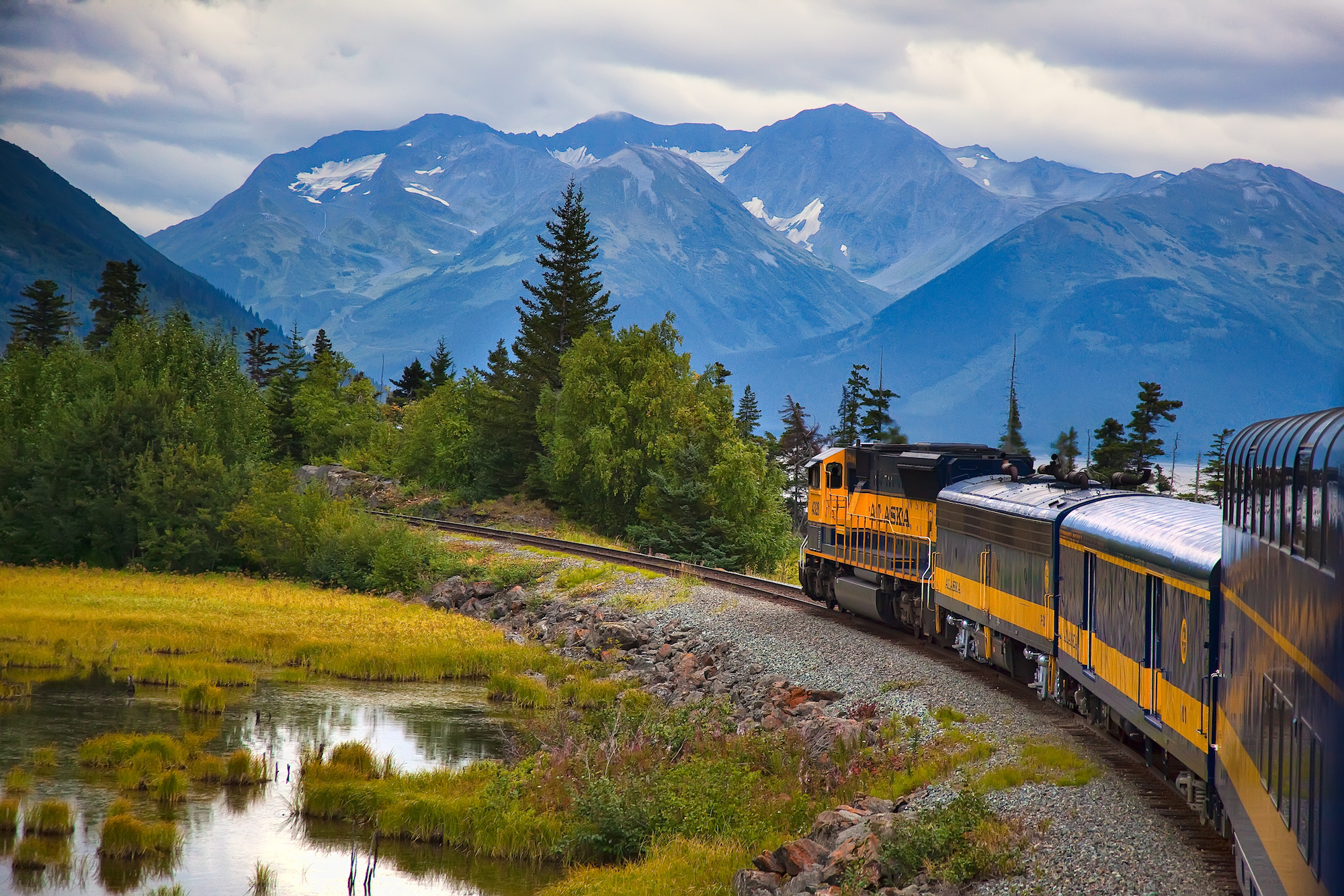 If you’ve ever imagined witnessing America’s last frontier for yourself, then the Alaska Railroad is here to make your dreams come true. Although the company offers a handful of stunning itineraries, its flagship train is not to be missed. The Denali Star traverses 356 miles of jaw-dropping landscapes, from sprawling canyons to raging rivers. And, there is of course, Denali, America’s tallest peak. The 12-hour trek departs from Anchorage, Alaska’s largest city, before eventually arriving in Fairbanks with stops in Wasilla, Talkeetna and Denali National Park. The train runs daily from May 16 through Sept. 16 before cutting back to a limited schedule during the winter months. It’s a quintessential Alaskan adventure that’s sure to impress even the most intrepid travelers.

Los Angeles to Seattle on the Coast Starlight 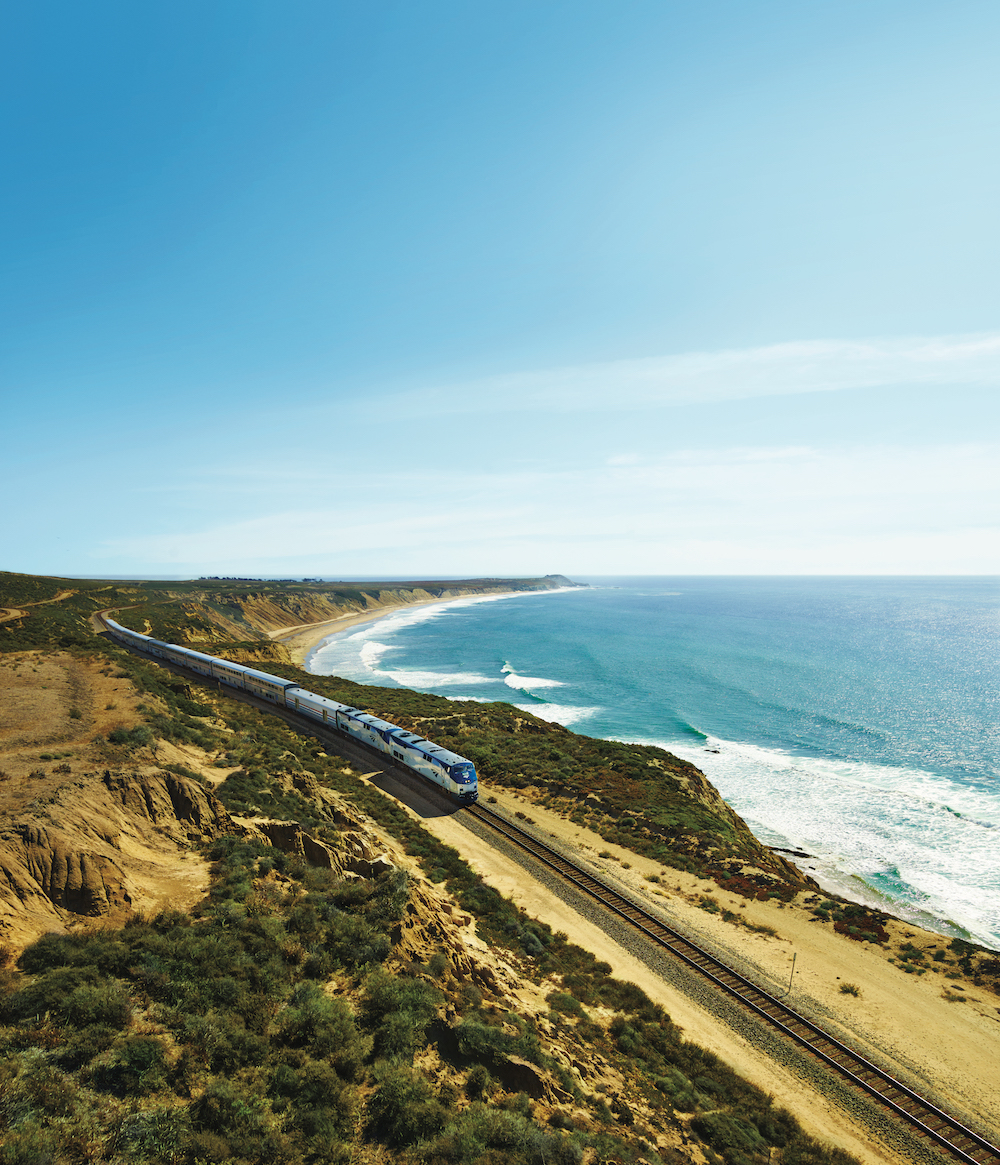 One of the most revered rail trails in the nation is Amtrak’s Coast Starlight; an epic expedition that strings together some of the most spectacular cities on the West Coast. The daily departure traces its tracks from Los Angeles to Seattle, zigzagging through must-see destinations like sunny Santa Barbara, the San Francisco Bay and the hipster haven of Portland, Oregon. Expect unmatched backdrops spanning from infinite stretches of the Pacific Ocean coastline to the snow-capped peaks of the Cascade Range. The daily route has been in service since Amtrak’s formation in 1971 and takes approximately 35 hours to complete. The locomotive also features Superliner sleeping and dining car accommodations. For the best seats in the house, book a ticket in their renowned sightseer lounge car to enjoy the most spectacular views. 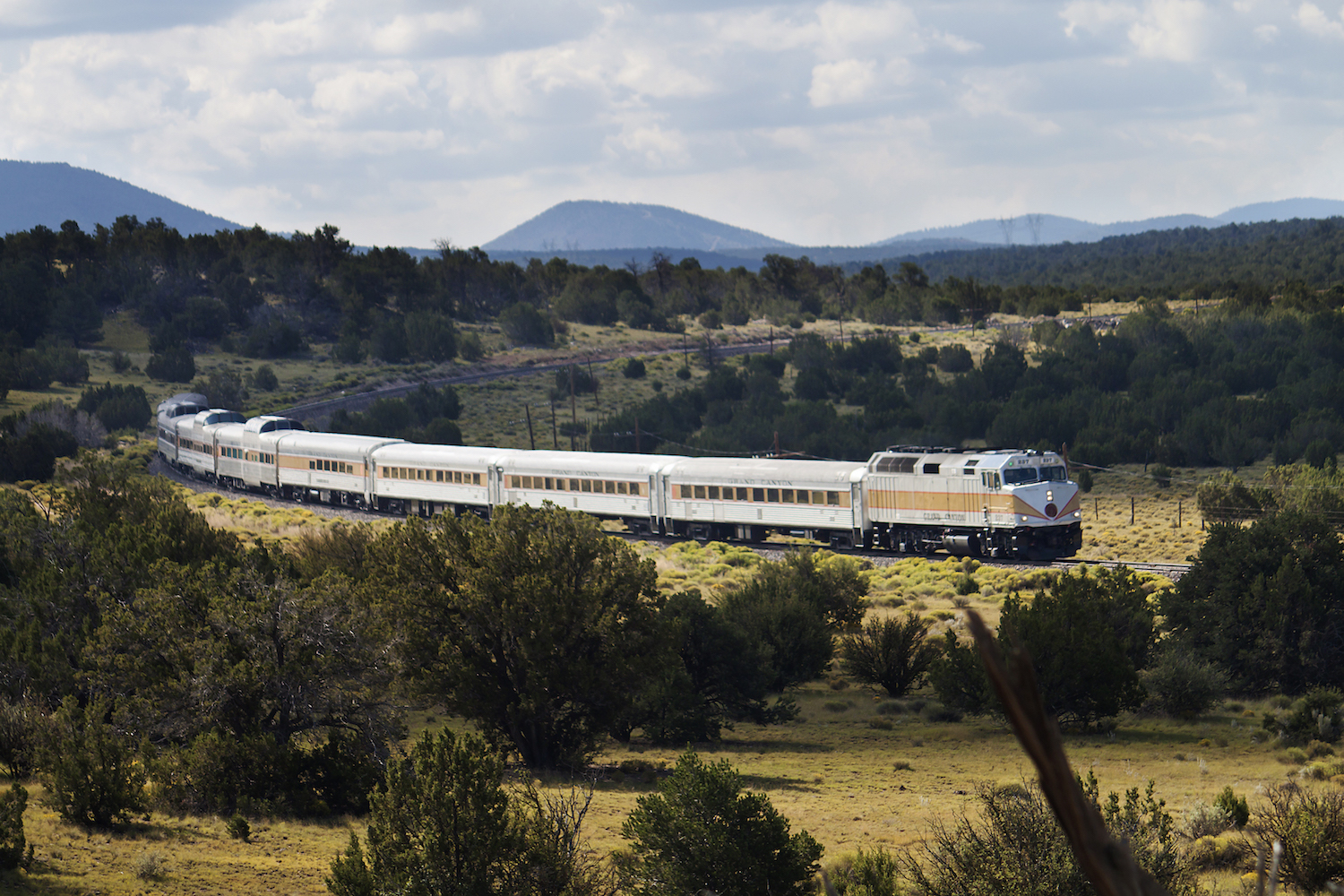 There’s no denying that the Grand Canyon is one of America’s most iconic and majestic national landmarks. It draws a staggering five million visitors each year after all. But while many of these amateur tourists take in its glory by way of a good-old-fashioned road trip (after hours of enduring a seemingly endless barrage of tourist traffic), savvy travelers arrive by rail. Enter Grand Canyon Railway, which offers a 130-mile round trip route from Williams, Arizona to the Grand Canyon’s south rim. The journey begins in dense pine forests before emerging to sights of rolling plateaus and vast desert. Keep your eyes peeled as you course past Native American reservations and diverse wildlife, including stoic elk and bald eagles soaring overhead.