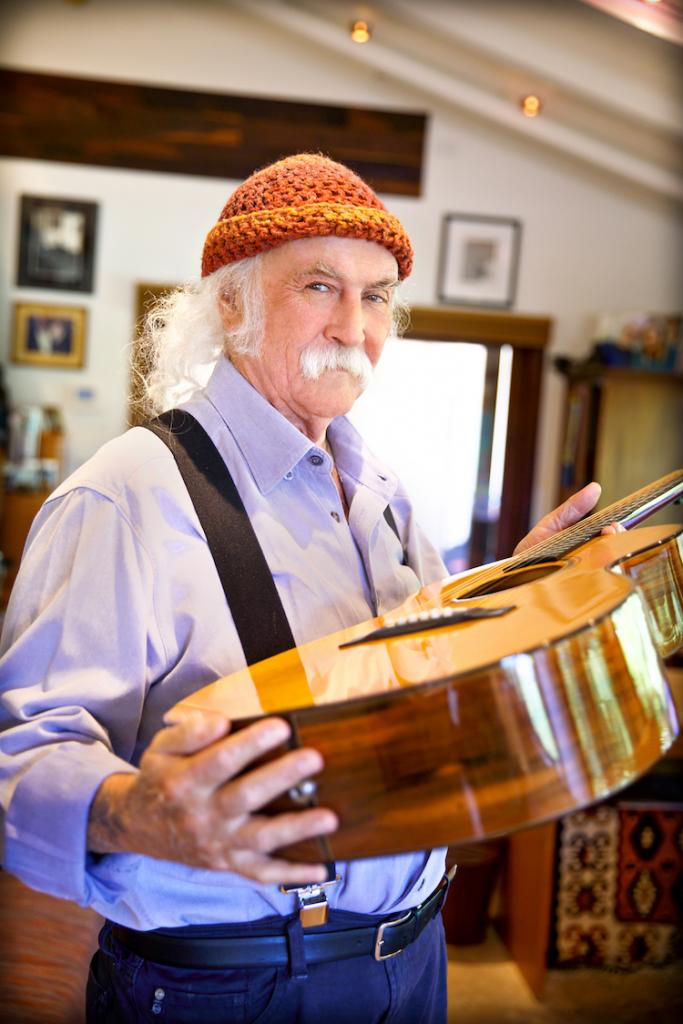 An old soul aglow with the energy of someone more than half his age, David Crosby is, at 76, not giving in an inch.

For his fans, the past four years have been a source of musical wonderment and bountiful blessings in the form of a series of stunningly brilliant solo albums coupled with a near-constant touring schedule. As for the artist himself, he has never been more musically active, never been more content with life than the present.

The musical icon—co-founder of The Byrds, Crosby, Stills and Nash and Crosby, Stills, Nash and Young—remains as outspoken as ever, as his legion of Twitter followers will attest to.

Let’s talk about the album you just finished recording with the Lighthouse band. Michelle was posting some pretty neat videos of the collaborative songwriting process.
Yeah, it’s been that. We wrote almost the whole record together. I’ve never done that before, really, with four people…kind of an amazing experience—a fully contributive, fully cooperative space. I’ve made music in competitive bands where we make good music—CSN, CSNY, definitely competitive bands—but this is a wonderful, elevating experience.

Regarding the collaborative nature in which you’re working with Michael, Becca and Michelle, what are some of the things you’re learning about them, or even from them, in terms of their own unique sensibilities?
Well, you know what I’ve learned? It’s a very reassuring thing. They’re much younger than me; they’re half my age, but they are exactly like me. They are people who have given their life to it; it’s their life. They have the same thing I do: they have family, but that’s the only other thing. There’s family and there’s music. These are people who, at their 30-year-old level, have already done the 10,000 hours. And, they are incredibly talented and incredibly able. The thing is, they’re still in love with it. They don’t have this long, grinding history, you know, that I’ve had with the other guys. They are still really in love with music and they are still thrilled that we get a chance to make it. The result has been a record that…I don’t even have words to describe it, man. It’s not like anything that anybody else is doing. [We’ve got] really good songs and they got worked on by some of the best vocalists that I’ve ever heard.

During these past few years, has your perspective on aging changed at all?
As you get older, you can look at it two ways. You can get very frightened by it all, sort of retreat into your own shell, and try to hide from your place in your life. Or, you can say, this is what the real world is, I have a limited amount of time. I’m gonna use every freakin’ second to do the only thing I can do that makes a contribution: to make this music and make the absolute best music I possibly can.

There are increasing calls for CSNY to reunite and provide a voice for these troubled times. How appealing is the idea to you personally?
Not very appealing if it’s CSN because that was a pretty unfriendly party. But if you add Neil to it, then there’s a challenge there, because he’s always gonna push the envelope; he’s always gonna try and push the thing out toward the edge, and I like that. He doesn’t like me right now, but I do like his music and I do love how he approaches his music. I would say, never say never. I don’t think it’s gonna happen; I don’t think that Graham is gonna outgrow his anger [with] me, or Neil. They’re both very angry [with] me; I can’t do anything about that. I don’t have any bad feelings about them, or Stephen. I’m fine with them; I wish them no ill at all. I would do it if Neil wanted to do it.

I recently read that Cameron Crowe is producing a documentary on you. How did that come to pass?
Cameron’s been my friend since he was 16 years old. [laughs] He knows me really well. He has an incredible gift as an interviewer; he always did. He gets stuff out of me that nobody else can. We have these interviews that are remarkable; they are, above all, honest. They are not self-serving. They are not, “Oh, then I discovered California, and right after that I invented electricity.” It’s probably going to be the most honest documentary on anybody that you’ve ever seen.

I also hear you’re working on another book.
Yes, we’re trying to get a deal to write a book about current politics and what I feel about the United States of America. I’m a kind of corny believer, strongly believing in democracy and the United States. I don’t think we have it right now, but I do love it. I like the idea very much and I’m trying to defend it any way I can.

What are your thoughts on the emerging youth movement?
They’re pissed, man. Look at it! We’re handing them a really seriously damaged world, we’re handing them a broken democracy, we’re handing them an America with the scab torn off of the racism…that’s the world we’re handing them! Of course they’re gonna stand up and take a stand. I’m so proud of them, I’m so happy about them and I want to encourage them any way I can, but I really don’t think they need us. I think they need to be them. They don’t need any grownups telling them what to do. If they can get the kids out to vote, we’re gonna take the Congress back, and then we can start repairing all the damage…that would be really good. In terms of global warming, I don’t think we have the time to waste. We have to get it back on track.