Years in the industry:
Seven

First time behind a bar:
Swallow East in Montauk, two weeks after they opened, in late 2012. I’ve been enamored by the bartenders since I was a kid, going out to dinner with my family and seeing them mix drinks, tell jokes and create a fun atmosphere. I wanted to try it. Moving here from Nashville for something new, I had no idea what it was like to live yet alone work in a seasonal area. The onslaught is something else. I had to pick up speed and learn on the fly. It was quite literally sink or swim. If I didn’t know how to make a drink I was Googling or looking it up in the Mr. Boston guide behind the bar.

Favorite thing about working behind a bar:
Practicing my standup routine.

Describe your drink-making style:
Bright, interesting and punchy, while relying on familiarity and styles that the guest will enjoy.

Favorite drink to mix:
Margarita and its many variations. I’ve had so many bad margaritas over the years. Haven’t you? They can be way too sweet or too boozy, which I guess isn’t always a bad thing. But when I make a margarita I like to rule on the side of making it a little more acidic than sweet. You can always add a little sweetness, but it’s a lot harder to take it away.

Favorite spirit:
Tequila. It’s such an incredible spirit. Take any grade and taste it against another and it will have a completely different flavor profile. Peppery, vanilla, caramel, mint, citrus, licorice, chocolate…It goes on and on.

Most underrated ingredient:
Vermouth. Stop asking for a martini if you do not want vermouth in it. This is a sensitive subject.

Weirdest drink request you’ve ever gotten:
Years ago, on one of those crazy busy summer nights in the Hamptons, a service ticket came in that said, “Open Liquor: MATTRESS.” That one threw me. I eventually came to find out that the guest had asked for a madras. But they might have been better off with an actual mattress.

Weirdest cocktail experiment you’ve ever attempted:
I’ve botched a lot of sours as well as tried to batch too many drinks into one shaker. Sometimes it’s nice to be sticky and wet, but not at work.

The best piece of bartending advice you’ve ever received:
“What’s your problem? You don’t have to go home with them.” My friend, JJ, a bartender at CittaNuova. It means to always remember that if you’re getting stressed or frazzled by guests, they’re not going to be in your kitchen when you get home. Take a lap.

If you were a cocktail, your name would be:
Rambo Smash. Rambo Sambo has been a moniker of mine for years. Doesn’t it just roll off your tongue? I played roller derby back in the day and during games fans would chant “Rambo Smash.” It also became a little bit of an alter ego if I imbibed too much at the afterparty.

One thing you wish would disappear from drink lists forever:
Basic bitches, go home. (Basic bitches are basic cocktails.) If you’re going to do something, do it. Do it great. Give a damn.

If you could mix a drink for any person, dead or alive:
Can I have two? Please? Thanks! One, David Bowie. I’d like to make him an OG pisco sour with his favorite fairy dust. Then stare into his eyes for eternity or until he was finished. And two, Barack Obama. I’d like to make him a classic gin martini or Gibson. Then chat about super duper top-secret shit that went down while he had the codes.

Favorite thing to do when you’re not drinking or making a drink:
Fitness. I’m a personal trainer and group fitness instructor during the day. I love exercise; it’s a form of meditation and brings balance to my busy life.

Your favorite bar and why:
Melrose Billiard Parlor in Nashville, back when it was affectionately known by some as “Smellrose.” It’s a dive bar and pool hall that I used to hang out at all the time when I lived in Nashville before moving to East Hampton. It’s in the basement of an abandoned movie theater in an OK part of town. It originally opened in the 1940s. Billowing smoke clouds, green worn down carpet, barely functioning bathrooms, pool tables, a shuffleboard and ping pong tables rounded out the attractions. We’d all hang out there after roller derby practice and get $4 well Cape Codders. Oftentimes Jack White would stroll in with the Raconteurs and Dead Weather crew and play pool. My friends and I would sit there and watch them play until they left. Sometimes until closing. We had some epic after parties there as well. It’s still there but it was taken over by new ownership and it’s now a sad, “improved” version of itself. It’s become a byproduct of the popularization and gentrification of Nashville. Stay weird, Nashville! I sound like an angry old lady yelling, “Get off my porch!” But I don’t care.

Best thing you ever drank:
Toss up between the Maserati at Employees Only or 1986 Chateau Margaux at a Christmas dinner two years ago at a friend’s house who happens to have an impressive wine collection. They asked what year I was born and if I wanted French or Italian. I then found myself sipping this. I never wanted that taste to leave my lips.

The worst thing you ever drank:
Crown Royal out of a bottle, after eating cheese dip. You do the math.

First time you got drunk:
Saint Brendan’s and Natty Ice. I can’t believe you just asked me to remember that! The worst.

If your bar shifts had a theme song:
“Rebel Rebel” by David Bowie or “Hallowed Be Thy Name” by Iron Maiden. It really depends on the phase of the moon at the time.

After your shift, you drink:
Water! And maybe, sometimes, just a little tequila.

Current obsession:
Being mindful and present, and finding balance and beauty in all tasks I put my mind to.

One weird thing we should know about you:
Ask me the next time you see me.

The last text message you sent:
“On my way!” 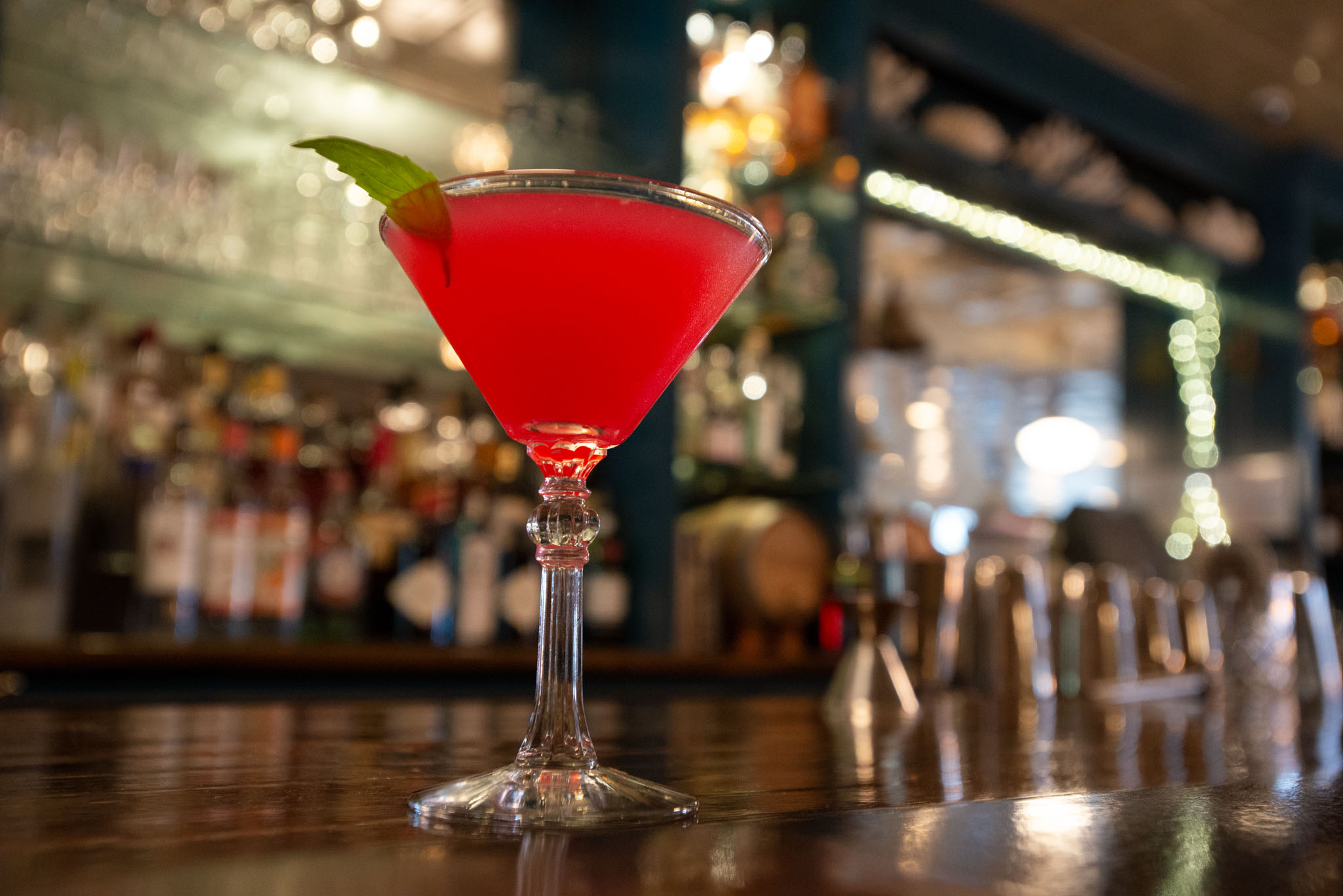 Tanagwizi is Swahili for ginger. I was listening to Afropop on NPR one night after work and the host and guest were talking about cooking with ginger in African culture. The program finished with the 1982 song “Tangawusi” by Franco & le T.P.O.K Jazz. The song speaks of an enraged husband, who, after his wife cooks for him with ginger and they eat, he forgets all about his anger and lusts back after her. It’s a beautiful Congolese rumba. I thought hibiscus would pair beautifully with spicy fresh ginger. I found dried hibiscus flowers at a local Spanish bodega. Once in hot water, they release a beautifully intense magenta color and tart, floral flavor. But watch out: it stains! Cocktail tie-dye party, anyone?

1) Combine all ingredients in a mixing tin and shake with ice.
2) Strain into a chilled coupe or martini glass.
3) Garnish with a basil leaf.

Add water and dried hibiscus blossoms to a medium saucepan and bring to a boil. Add sugar, and stir to dissolve. Turn off heat and allow to cool before pouring the syrup through a strainer and discarding the solids. Store in the refrigerator in an airtight container.

Combine both ingredients in a blender and blend until sugar is dissolved. Yields 1 1/2 cups.