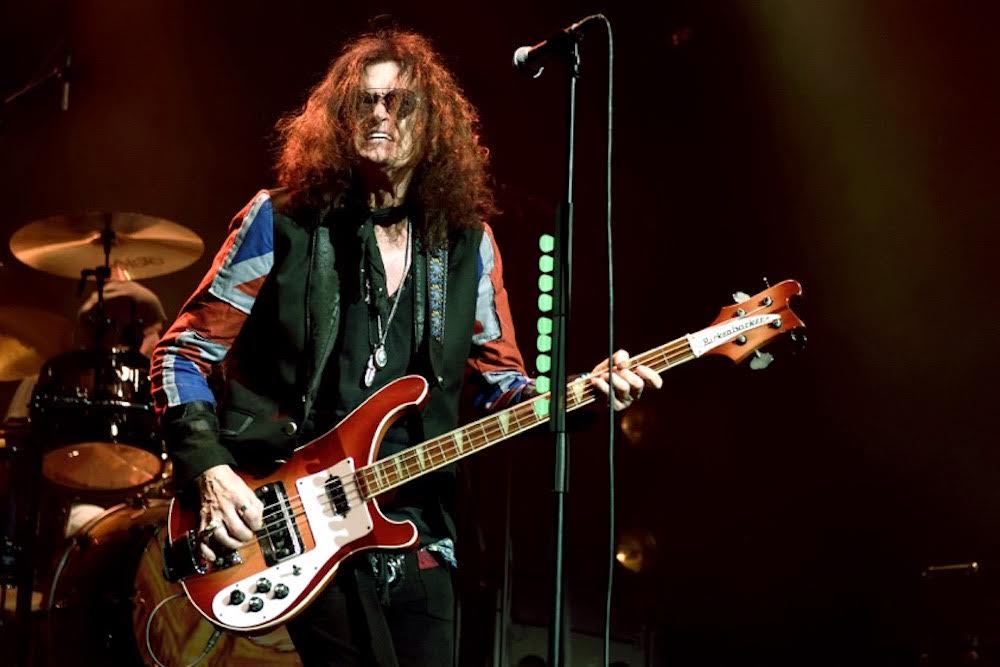 Not many artists can say they have recorded and shared the stage with such all-time guitar greats as Ritchie Blackmore, Tommy Bolin, Tony Iommi, Joe Bonamassa and Joe Satriani. But singer/bassist Glenn Hughes has rocked out with all of them through the years as a member of Deep Purple, Black Sabbath and Black Country Communion.

Appearing on three classic Deep Purple albums—1974’s Burn and Stormbringer and 1975’s Come Taste the Band—Hughes and his former Purple bandmates were inducted into the Rock and Roll Hall of Fame in 2016. And this year, he is revisiting his past with the Glenn Hughes Performs Classic Deep Purple Live tour, which visits the NYCB Theatre in Westbury on Aug. 25 and Sony Hall in NYC on Aug. 29.

Hughes spoke about the tour, Deep Purple and Ritchie Blackmore.

Let’s discuss the Glenn Hughes Performs Classic Deep Purple Live tour.
What I’m doing is I’m taking inspiration from live performances from the mid 70s. I’ve got a file of work that you may have heard or seen from Cal Jam, London, Paris and LA. I’ve taken live arrangements of those classic songs, rather than the studio cuts. I just feel that it is closer to what we were doing when we were “all in our glory,” if you will. I think it’s re-translating with the audience and it sounds great with me and my band.

Which Purple songs are your favorite to perform?
Those songs that we wrote at Clearwell Castle—the castle where all the acts of that period in 1973/1974 rehearsed or recorded—are the loves of my life. I think I may be the only guy from the era doing a selection of songs from those albums—Burn, Stormbringer and Come Taste the Band. David Coverdale had a small run of a Whitesnake/Purple tour, which was great, but…I’m doing live arrangements and giving a real vibe to that. So, all of those songs you can imagine: “Mistreated,” “You Keep on Moving,” “Stormbringer,” “Might Just Take Your Life,” “This Time Around,” “You Fool No One.” It’s a really great event.

It appears as though the music of Deep Purple from the early to mid 70s is as popular as ever.
When you really think of rock music—classic rock music—it takes you back to the late 60s and the early 70s when you had Led Zeppelin, Deep Purple, Black Sabbath, the Who, the Rolling Stones, Pink Floyd, Yes, Genesis. You had these great songs with guys normally wearing T-shirts and bell-bottoms. And that’s the glory of what I consider to be the golden age of rock music. Me being in a couple of those bands, and having a great memory of those moments…I feel like when I’m singing on stage, I am getting into character…I’ve grown my hair again and I’ve been to that “moment” of the early 70s. I kind of like it there. I mean, I like being a modern man in 2018, don’t get me wrong, but people—the fans—seem to dig what I’m doing, doing this format of expressing that generation of the 70s, which was a strong period. With that period, I’m not hiding from it, so why not give people pretty much what they want?

Are you still in touch with Ritchie Blackmore?
I don’t think anybody is really in touch with Ritchie. I say that out of love—Ritchie is Ritchie. But we have reached out to one another. He did ask me to see if I’d like to be in the latest Rainbow. It really wasn’t for me, and I only wish him the very best.

Ever consider putting together a project with David Coverdale?
I think that time is gone. There was an opportunity a few years ago when Jon [Lord] was still alive that we were trying to get Mark III back together. And then when Jon passed away…the only reason David and I would get together again would have been anything to do with Purple, the Purple music, the Purple legacy. And now, he’s done the Whitesnake/Purple record [2015’s The Purple Album] and now I’m doing this…I will continue on my own with my merry band of gentlemen and we will go around the world doing what we do. America is a big, big thing for me…which is where I’ll be playing quite a lot. There will be three legs of this tour, first one being August/September, the next one next spring and then late summer of next year. America will be getting to see a lot of yours truly. And I can’t wait.

You have also covered the Police’s “Roxanne” with the proceeds benefitting Rock Against Trafficking.
It really is a great work of Gary Miller, who is a friend from England. He came to me about six years ago to get this thing going. Slash got involved and the guys from Journey and Ann Wilson. I was the first one to go in and sing “Roxanne,” being the song that was chosen for me. Sting is one of our great songwriters of the last couple of generations. I think it’s a great idea to choose Sting’s songs for this project as they are very melodic and he’s a great lyricist.

Any parting words?
My North American tour starts in New York in Westbury, and let me say to you all, this is a great, great start for me in the neck of the woods that I love so much, the East Coast, at a great time of year. It’s a great way to start my tour and we are all so much looking forward to it.