Dave’s nights are haunted. He listens at the doors, at the windows and hears that hideous shuffling, scratching sound. The evil ones are out there. Massing.

It’s November. Hell yes they’re out there, the creeps.

Dave lives in the woods. Not the woods woods, but the Long Island exurban version—three-quarters of an acre and a terrible lot of trees. Every November they return, wave after wave, parachuting in and lying there all innocent-like, the way they do. Then they start sneaking in.

There’s one now. He hadn’t even been outside yet this morning, so it’s no good pretending the leaf accidentally got snagged on his pants cuff or something. No, he’d specifically swept the entryway last night. Or maybe it was the day before. Who knows anymore, he’s so groggy from lack of sleep. He strolls casually behind it then pounces, grabs the hideous thing by its tail, opens the door just five inches, hurls it out and slams the door fast, before the others can attack.

Two days ago, Dave walked out like the guy in the movie about the birds, stepping gingerly through them all. He opened the car door and there, above the hinge, in the little space no bigger than his hand, for god’s sake, was a sleeper cell. Six or eight leaves just crammed in there, probably hoping to hitch a ride to one of their secret meetings. He cleaned them out but good. Then, yesterday morning, he opened the car door again and there was another gang of them wedged in there. “Don’t you guys get it?” he screamed. “I’m on to your tricks!” His neighbor, Mrs. Rappaport, shot him a worried look, dropped her rake and scurried inside. 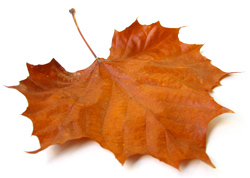 Dave considers trying to slow his breathing. That’s what his therapist advised. “This November, Dave, why not try meditating?” he said. “Close your eyes and think peaceful thoughts.”

Dave said he would, but he knew he wouldn’t, because as soon as he closes his eyes, they start trying to work their way into his house again. He’d found one in his jacket pocket that very morning. In his jacket pocket. The fiend.

Dave wanted to ask, then why do they keep coming? He gets them all raked up and things are okay for a while and then they come for him again. He was about to say that but then he looked down and saw one clinging to his therapist’s sock. Oh god, he thought. It heard everything. Or maybe…maybe they’re working together. Mind control. The creeps never stop. Dave hadn’t been back to the therapist since then. 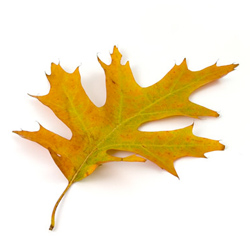 Dave goes into the kitchen to make a soothing cup of tea. He’s about to put the kettle under the faucet when he sees it—a leaf floating in the little space between the storm window and the inside window. There was no leaf there last night. It’s fluttering , taunting him. No, wait, it’s stuck! Somehow it had breached the outer window and was on its way in but had gotten caught on a spider web. “Ha!” Dave howls. “Got you, you bastard!” Dave never kills spiders for this purpose; they’re a key part of his border guard. In fact, when he finds one in the garage, he transplants it to the windows.

Dave opens the kitchen window and carefully clasps the leaf with a pair of salad tongs, trying to damage the web as little as possible. He carries it toward the front door to throw it out but stops dead. Blood drains from his face. Impossible. There. Right there. Another leaf on the floor. He’d just cleared that sector. Dave takes off his slipper and begins pounding the leaf, but it’s fairly fresh and keeps springing back instead of crumbling. Dave gives it grudging respect; this zombie can take a lick.

That’s how Dave’s wife finds him when she comes down the stairs—on his knees, one hand slamming a leaf on the floor with a slipper, the other hand clutching a leaf with a pair of salad tongs.

“Hi honey,” she says, stopping then pirouetting so he can check her for stowaways. They’d been through many Novembers together.