Anyone who has been paying attention to the arts in recent years is aware that the Long Island poetry scene has become a happening thing. In fact it’s been described as the pound-for-pound rival of any regional poetry scene in the nation. Less frequently discussed however, is the decidedly international flavor of poetry on the Island. From the main stage at the Walt Whitman Birthplace to the tiniest coffee house and back room haunt, the tone and cadence of native Long Island poets is being supplemented by a virtual World Café of voices. And now, with both Nassau and Suffolk County appointing transplanted artists to unpaid, two-year assignments as poets laureate, Long Island is cementing its reputation for embracing international voices.

At any of the dozens of readings around the region, one is likely to hear the rich Irish brogue of John A. Brennan, or the Italian-accented tones of Antonio Bellia (aka Madly Loved)—not to mention Irish Gaelic and Old English from the lips of West Islip native Ed Luhrs. Poets like Yuyutsu Sharma of Nepal and Geraldine Green of the UK have made Long Island a regular stop on their travels and local translator Jonathan Cohen has been entrusted with the works of Latin American poets like Roque Dalton, Pedro Mir, Enrique Lihn and Ernesto Cardenal.

To be sure, the phenomenon is not without precedent. In the early- to mid-20th century European poets as diverse as French Surrealist André Breton, Russian Futurist David Burliuk and England’s WH Auden were Long Island denizens. So were Louis Simpson, Jorge Carrera Andrade and Claire Nicolas White. Antoine de Saint Exupéry wrote The Little Prince in Asharoken and HR Hays was a foundational figure in bringing Latin American poetry to the US. Another local bastion of international verse is Merrick-based Cross Cultural Communications, a house that has specialized in publishing obscure and endangered world languages for decades.

But now that both of Long Island’s poet laureate positions are filled by transplants from foreign cultures the region’s inclusion of international voices has reached a new level. 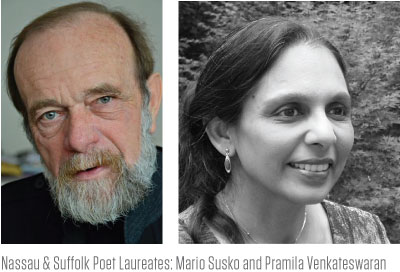 Pramila Venkateswaran, Suffolk County’s poet laureate, hails from Mumbai, India. A Setauket resident who teaches at Nassau Community College, she came to the US to obtain her PhD in Washington and has been on Long Island since the 1980s. “When I came to Long Island in 1985 there was nothing happening. Now, it’s a rich and vibrant community,” she said of the development of the poetry culture in the area.

Venkateswaran believes that her cultural heritage brings an important dimension to the poetry scene, beyond having expertise in the ghazhal, an Indian poetic writing form. “The other day I read some poems in Tamil,” she said. “The audience loved hearing poetry read in a different tongue. And a different perspective on issues. I’m in the academic community, but feel it’s important to work with writers in the region,” she said.

Mario Susko, Nassau’s poet laureate, is originally from Sarajevo, Croatia. A Mineola resident, he has been a professor at Nassau Community College since the 1990s—though it’s a place he returned to after having taught there 40 years ago. The Croatian makes a distinction between his teaching and his activities in the poetry community. “What I do at college I do as a professor,” he said. “What I do in the poetry scene I do as a community member. I work hard not to bridge that gap.”

Susko thinks the Long Island poetry scene is lively, but in need of more support from the general public. “The public needs to recognize Long Island poetry in its proper light,” he said. “It’s not an isolated activity among a certain group of people. It’s part of the society, like other arts.”

As for Venkateswaran, she has her own perspective. “Some people think of me as a poet, others as an Indian poet and others as an Indian-American poet,” she said. “It all just depends on the context. Identity is in the eyes of the beholder.”