Herstory Writers Workshop began in the mid-1990s when novelist and essayist Erika Duncan offered a week of free workshops to women who had experienced personal and political trauma. Duncan’s idea was to give voice to those without conventional literary or educational backgrounds, to enable them to create literary works powerful enough to move an audience of strangers. Today Herstory reaches thousands of people from all walks of life, using the stories produced to change hearts, minds and policies. Women and girls—and more recently men and boys—from all over Long Island participate in around 15 weekly workshops held at schools, community organizations, shelters and jails. They contribute their stories to anthologies, read them before legislators, college students and the general public, or just share them with one another. The following memoir excerpts come from these workshops and are only lightly edited to preserve each writer’s rhythm and voice. To learn more about the project, visit herstorywriters.org.

JUST AN ORDINARY GIRL
By Arooj Janjua
Arooj produced this story when she was a sophomore at Hempstead High School. The piece relates her experiences wearing a hijab [headscarf ] to school for the first time.

I just look like a Muslim to most, but to a few I am an unwanted creature, a terrorist. The thought of me being called a terrorist ran through my head over and over again as I tightened my scarf and took my first step into middle school in a hijab. I thought it was bad enough being how I was before. Even though throughout 6th grade I didn’t wear a scarf on my head, all I heard around me was “ugly terrorist,” “you need a bag on your head” and “immigrant.” I went mute after that. Barely spoke a word. That innocent little girl became what she believed herself to be.

It was an ordinary day. I woke up at 6:30, got dressed and looked at the mirror. I stared at the girl looking back at me. With her long black hair flowing everywhere from the front of her face all the way down her back. Her light brown eyes filled with confidence, such confidence that nothing could bring her down… not until that day.

That day was nerve wracking for me. I mean making a huge change is nerve wracking for most people. Everything was ok at first. I sat in the cafeteria waiting for the bell; hoping no one would say anything, but I was wrong. People came up to me making a wall of intimidation around me, mentally and physically. They asked so many questions that I didn’t know how to answer, mainly because I was afraid to speak. They laughed their hearts out. They touched my hijab and one person actually pulled my scarf off my head.

After that day I was very scared to do anything. Scared to speak, scared to do work on the board, scared to change myself, scared to tell someone. I usually sat with my teachers at lunch and in the morning as well. Whatever I could do to hide from everyone. I did whatever I could to get my mind off the thought of them hurting me again. I’d work, clean, draw and help others. It suddenly hit me, what will I do next year? I can’t keep hiding behind my teachers. Just that thought got me so mad.

Anyone who came my way never spoke to me again. I would beat up people at the portables. I would curse out anyone who said anything about me. I pushed people. I hurt them like they hurt me. I became a girl who reflected her feelings on others. I basically became the bully. When I realized that I was the bad guy this time, I stopped. I didn’t want to hurt anyone. I went back to that helpless girl hiding from the world. I felt like I went through different phases of who I wanted to be as a Muslim. People knew I was tough and rude so they didn’t bother me as much. One good thing came out of that. But they just left me alone. I never had a friend since. 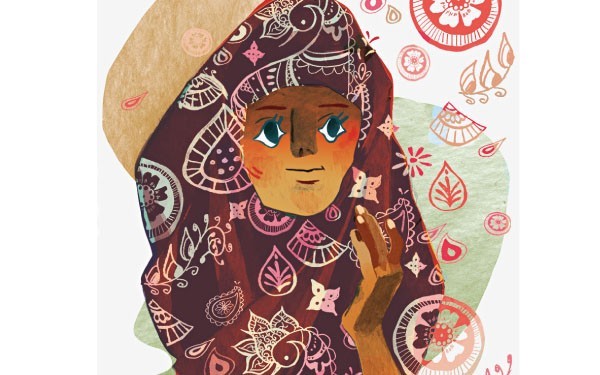 I remember a girl who actually tried to talk to me and tried to be my friend. Her name escapes my mind but her face is clear to me. At lunch I was sitting outside on the bleachers drawing henna designs all over my paper. She came up to me.

“Hi.” I looked up and saw her face and thought it must be a prank or a dare to talk to the terrorist. I ignored her.

“Arooj,” I replied cautiously making sure that I didn’t get laughed at. People laughed at my name, thinking it’s so many things other than what it really is, Arooj.

“That’s a nice name. What does it mean?” I looked up and she was still smiling.

“It means highest of all or rise.”

“That sounds so cool! What wou…” she couldn’t finish her sentence. Out of nowhere two girls run up to us and I think, oh shit please do not say anything.

I looked to my right and looked at her. She was still smiling. The two girls ran off to find whoever Chris was to tell him that someone likes him.

“Wow! So stupid.” I looked down and continued to finish my flower.

“Wow! That’s so beautiful! You have to teach me that!” she commented. I looked up and as soon as I opened my mouth to say something… beep. The bell rang. I grabbed my things and ran off to class. 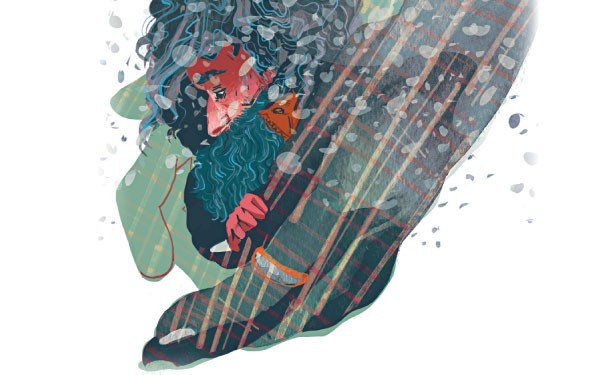 A COLD TUESDAY
By Yolanda Gress
This story was translated from the Spanish, written in a bilingual workshop in Farmingville shortly after the violence there.

A Tuesday in January 2005—a very cold day. Snow had fallen the day before and the wind was blowing. It made your hands freeze and the cold penetrated through to your bones. My car didn’t have heat, but I had the responsibility of taking Armando, my son, to Kara, a high school student who helped him with the hard homework problems that he didn’t understand.

The road and everything around it was white; but just as we were crossing a bridge, the light turned red. It was then that my son and I turned around, and saw a man covering himself with cardboard. The cold was awful and I noticed in particular that this man’s hair was very messy. His face and hands were very red. I had to drive on, and in the moment when his hands were present in my mind, what came to me was the image of Jesus.

I drove to the next traffic light when my son and I turned toward each other. He said, “Poor man, no, Mom?” Yes, I answered, adding, “I don’t know why the government doesn’t help him, since he’s American!”

We arrived at the next light and I turned around as if expecting to see him, but what I saw were two blankets belonging to my two-year- old daughter Diana, the baby of the family. I said to myself, “Blankets!” I said it aloud to Armando. I saw an expression of happiness on his face, and I thought: “These are little Diana’s blankets. How can I give them away?”

These blankets meant a lot to me because Diana had had them ever since she was a baby. I asked myself, “What do I do? Do I give them to him or do I go on?” But poor thing, pobrecito, I thought again. He’s cold and I at least am inside the car. I had little time to decide, and I was confused. The light turned green and I had to go on. But the road divider was long, and there wasn’t a place to turn around. Armando and I were silent. I saw my son’s eyes fi ll with tears, and I had a lump in my throat. I thought, “Dear God, protect him! Forgive me, Lord! I don’t know what to do! Forgive me, Lord!”

We passed under a bridge and I turned around to look at my son. He looked very sad, and at the moment we were looking at each other, he said, “When you go back, look for him, Mom!” I immediately answered, “Yes, son. I’ll look for him. I don’t know if I’ll find him, but I’ll l look for him.”

We finally got past the long road divider. The silence continued for seven or eight blocks. I thought, “Where will I find him? What direction did he take?” Since he was on one side of the bridge, I didn’t know if he had walked off of it, or if he had gone to the other side.

I dropped Armando at Kara’s house for tutoring and began to drive home. To my surprise, as I crossed the bridge where we had seen the man, I saw someone walking in the snow. I felt the sky open up. I felt that God was smiling down on me. I caught up with him, and turned around to see if it was the same man. Yes, it’s him! I parked on the side of the road, a little ahead of him, then I lowered the window and yelled: “Hey, you need a ride?”

I felt that he was waiting for something like that, because as soon as he saw me and heard my shout, he didn’t even think about it; in fact, he even crossed the road without looking both ways. When he got to my window I took out the two blankets and said, “This is for you.” I offered to take him to his house. In English he said, “You’re going to take me to my house?”

I understand very little English, but in that moment it was as if we had spoken the same language. “Yes,” I answered, smiling at him.

After a moment of silence, he said, “In this city nobody gives rides.” He continued talking throughout the ride, but I couldn’t understand anything else. I remember that he spoke slowly and in a soft voice. I asked him, “Where is your house?” To my surprise he said, “Here’s fine,” pointing to a parking lot.

I stopped, he took his blankets, and as he got out of the car he thanked me. I never saw his face again. I remained parked, looking at the cars covered in snow, with nobody else around. I wondered, “Where does he live? What is he going to do?” And then I headed for home.

“If your words had the power to heal our communities and hearts, what would you want them to say?”

These are the words that inaugurated Herstory’s inter-generational Bridges to Justice workshop that started in New Cassel last February, bringing together college students, community leaders and elders to write side-by-side.

“Is there a particular scene that might give a human face to your journey so that readers would no longer judge you, but would extend a helping hand?”

This question is asked by facilitators from Herstory Writers Workshops at the Riverhead and Nassau County jails every time a new participant joins the three weekly writing circles that take place behind bars.

Whether Herstory’s facilitators are meeting with a lively group of children of the incarcerated from Central Islip High School, language learners from Patchogue/Medford High School, Uniondale High School students writing about racial justice, women living in domestic violence shelters, or community elders, they use their empathy training to help newcomers look inward, creating grassroots literature based on daring an imaginary reader to care.

Do you have a story that might make a difference? Join one of Herstory’s community-based writing circles and raise your voice in the struggle to change hearts, minds and policies.— Erika Duncan, founder, Herstory