Be the change. It’s something Judy Chicago has been doing for decades. As a woman artist in the 60s and 70s, Chicago faced difficulty breaking into the male-dominated art world. Not willing to accept this, she took to using materials traditionally associated with men, like automotive paint, car hoods and pyrotechnics, challenging assumptions and, at times, dissociating her gender from her work. Simultaneously, Chicago fought the traditional mindset that relegated common women’s artworks, like stitchery and porcelain painting, to the footnotes of art history as merely craft.

“I’m a troublemaker,” chuckled Chicago, who not only founded the first feminist arts program in the country, engendering a movement, but also created one of the great works of 20th century art. “The Dinner Party” is a monumental sculpture that’s nothing less than a rewrite of the history of the Western world to include women’s achievements. “The project,” explained Catherine Morris, senior curator of the Brooklyn Museum’s Elizabeth A. Sackler Center for Feminist Art, “was about finding the women who were written out of history and telling their stories.”

“It was the naivety of youth,” Chicago recalled. “I thought with my paintbrush, all by myself, I was going to teach women’s history. I did it, but not all by myself.” Over the years Chicago has collaborated with many artists, from her husband, photographer Donald Woodman, to the dozens of women who came together to implement designs and propose heroines to include in “The Dinner Party.” Chicago landed on the idea of place settings after learning porcelain painting. She was conceiving of a work to highlight women in history and thought, “I really want to paint them on plates as a metaphor for being consumed by history. Okay, so then plates belong on a table.”

After five years, “The Dinner Party” was completed in 1979. It opened countless conversations, including an 87-minute debate in the U.S. Congress. It is on permanent display at the Sackler Center but Women’s History Month is the perfect time to experience it.

A short hallway hung with banners marks the entryway. “From this day forth Like to like in All things,” one flag proclaims. Reading the messages slows the viewer and imparts the sense that he is entering a space where something special dwells. Behind a curtain, in a darkened room, is Chicago’s spotlighted masterpiece. 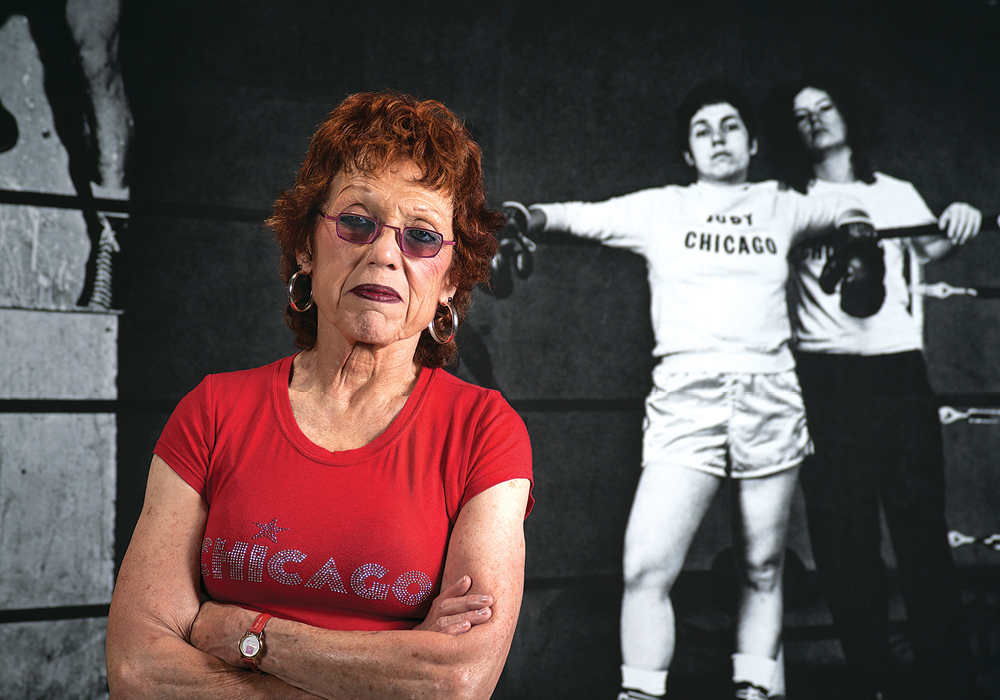 Judy Chicago has always been a fighter, in and out of the ring.

A massive triangular table, 48 feet on each side, is covered with gleaming white cloths and vibrant, painted and sculpted porcelain plates. Each of the 39 place settings is dedicated to a woman in history. The Heritage Floor below bears the names, written in gold, of an additional 999 women artists, educators, political and spiritual leaders, scientists, writers, musicians, activists and healers. They stretch from prehistoric goddesses to 20th century suffragettes.

Each setting includes an embroidered runner with the name of the honoree, as well as a gold chalice and a painted plate. Ishtar, Kali, Hypatia of Alexandria and Hatshepsut are among the mythical and real women included from the ancient world. Hildegarde of Bingen, Isabella d’Este, Empress Theodora and Artemisia Gentileschi are presented in the section of 13 women from the beginning of the Christian era to the Reformation, and the modern world is represented by women like Virginia Woolf, Sojourner Truth, Susan B. Anthony and Georgia O’Keeffe.

“When you walk around it, you really experience, physically, this sense of the impact that these 1,038 women had on the history that had largely ignored them,” Morris said. “Judy’s brilliance was to think that history could be told in not just a sculptural object but this very large-scale monumental object that requires you to walk around it and to look at the place setting in front of you with the name on the runner, but also to look across it to the backs of the other runners on the other place settings around the table. There’s this constant back and forth across time, across history, across space…that you can never get from looking at a picture.”

The piece is a profound and deeply moving visual, conceptual, societal, personal and universal work of art about female affirmation, celebration and pride. It’s changing the narrative, one viewer at a time.

“I don’t see my work as having a message,” Chicago said. “I see my work as having meaning expressed through form, which makes the form and the meaning inseparable…That’s one of the reasons I’ve used different media and techniques, because different subject matter lends itself to different techniques…The function of beauty is to help us look at things that we might not otherwise be able to look at.”

Despite Chicago’s statement, it’s hard not to see a message in “The Dinner Party.” It’s the message of all great art (and some of history’s best troublemakers), and it goes like this: Pay attention. Wake up. Be curious. Participate. Ask questions. Decide for yourself.

The Sackler Center is concluding a yearlong celebration of its 10th anniversary with the special exhibition The Roots of “The Dinner Party,” examining Chicago’s evolving plans for her seminal work. Morris said it was “a very strong and intentional acknowledgment of the place of Judy Chicago’s masterwork in the founding of the Sackler Center and in the founding of so many of these conversations.”

Still, “The Dinner Party” is neither without detractors nor everything everyone wants it to be. Some have questioned why they don’t find their own stories presented. “I think what that reveals is the level of development or lack thereof of the viewer,” Chicago said. “It’s not about you. It’s about your history. It’s about our history as human beings, and that takes an empowerment step.”