Ashley Graham is trying to convince me that I’m wrong about bikinis. I say, short of a burkini, the more material, the better. She has other ideas. “I feel like if I’m showing more of my body, and the bathing suit is less constricting, then it’s just more flattering. That’s why I love a string bikini,” she said. “But I’m a special case in that I would walk around butt-naked all the time if I could— it’s just more comfortable.”

It’s far from bikini weather in London and Graham, 30, is dressed for winter in a fluid Tome jumpsuit, navy-blue Marina Rinaldi coat, ALDO heels and full-spectrum Spanx. She’s just arrived from New York ahead of the 2017 Harper’s Bazaar Women of the Year awards, where she’ll take home the Model of the Year trophy. “It’s going to be a lot of fun. I’m excited to see Victoria Beckham.”

Picture Graham next to Beckham and you can’t help but imagine that the designer would be swamped by Graham’s overwhelming femininity. Just look at her, she’s gorgeous, like Eva Mendes’ curvier twin with a body that can out-hourglass any actual hourglass. And what a laugh: she has an enveloping, full-bodied roar that manages to seem both conspiratorial and booming. It bubbles up whenever its owner is delighted or relishes having said something borderline shocking, which is often. “Oh yeah, I wear a night guard [to stop teeth grinding],” she told me in response to a dry question about what she keeps on her nightstand. “One time, I had sex with my husband when my night guard was in. Later, I went to the bathroom to take it out and he was like [she’s now yelling in mock outrage], ‘That thing was in the whole time?!’” And another laugh rolls through the room.

Graham is one of the world’s 10 highest-paid fashion models, the only curvy one to rank alongside Kendall Jenner, assorted Hadids and Gisele Bündchen (she wears a size 16-18 and hates the term “plus-size”). She’s also a body activist, TEDx Talk-giver (her “Plus-Size? More Like My Size” talk from 2015 has been viewed more than 2.3 million times), lingerie and swimwear designer, author, TV presenter and, well, she’s quite the pin-up. In 2016, in a turn of events that now seems preordained but which must have called upon Graham’s reserve of sheer moxie, she became the first larger-than-sample-size model to appear on the cover of Sports Illustrated’s swimsuit edition. Her and all her booty-popped glory. Covers with American and British Vogue followed. But what really makes Graham feel she’s made it is the Barbie that Mattel produced in her image. “She’s got thighs that touch and lower-belly fat and round arms,” she said with satisfaction. The Vogue covers reside in a storage box but Barbie lives prominently on a shelf in the kitchen.

That Barbie and her Bazaar trophy have both made appearances on Graham’s Instagram. She also posted a stream of bikini pictures from her 30th birthday trip to Costa Rica last year when she took 12 of her closest friends, her husband and her personal trainer along for a few decadent days in a swish villa. Never one to go fully offline, Graham combined the trip with a campaign shoot for her newest Swimsuits for All collection—ergo the bikinis. “That was the right way to bring in 30. I wanted to live it up because in my 20s I worked so hard to get to where I am today. Now I’m really celebrating everything that I’ve done with the closest people in my life.”

Graham said she’s “always been an old soul,” even back in Nebraska where she mostly grew up and wound up being scouted in a shopping mall. She already looked more mature than her peers and her figure leant most of her work a provocative air from a relatively young age. The first job she booked was a lingerie shoot. There was a contract saying, “they would airbrush my nipples out of the see-through bra because I was under the age of 18.

“Everything has always been sexy,” she said. Rarely was her status as a minor reflected in the work or the on-set treatment: during a recent appearance on The View, Graham described being cornered by a photographer’s assistant on a shoot when she was 17. “He lured me into this hallway, pushed me into a closet…exposed himself and he said, ‘Look what you did to me all day long. Now touch it.’” The encounter left her “freaked out” and worried that nobody would want to hire her if she spoke up. 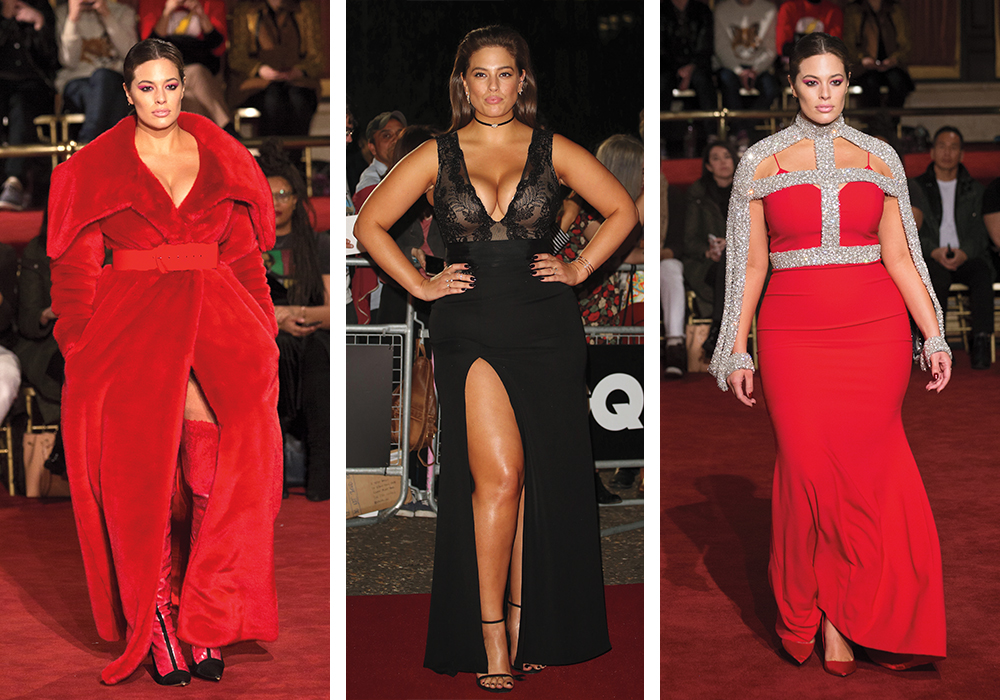 She knew she had to say something though, when two American TV networks rejected a 2010 Lane Bryant commercial on the basis that it was “too sexy.” In it, Graham flits around the house in a bra-and-panty set until she gets an alert to “Meet Dan for lunch.” She slings on a trench coat and walks out the door—not exactly post-watershed material. Graham considered the ban discriminatory: she assumed it never would have been imposed had the commercial featured a less voluptuous model. Her agent told her, “This is either going to be your moment to shine or just a moment—you choose.”

“Until then, I was just taking pictures in some hideous clothes and all people expected from me was to be fat and happy. That’s what my career was. I always wanted more…and that opened a new door for me, to know that I actually had a voice.”

The publicity led Lane Bryant to book Graham on the first of her contracts—and to her lingerie line. Then Sports Illustrated came calling. “That was a game-changer. It was history-making. And it also made women feel better about being in a swimsuit.” Graham said she regularly hears from women thanking her for empowering them to go to the beach in whatever they want. “I also get emails from men saying, ‘I’m finally having sex with my wife with the lights on because she’s more confident in her lingerie.’ That’s an amazing compliment, right?”

Graham said she’s thought of herself as a role model forever, thanks to her two younger sisters. “My mom always said, ‘They look up to you. Anything you say or do, they’re going to do. But you’re never going to know that because they’re going to act like they don’t like you.’ Now I look at my fans and I’m like, ‘You are all like my baby sisters. We’re all in this sisterhood together.’”

She takes the sisterhood seriously, replying to as many emails and Instagram messages as she can. She posts videos of workouts with her trainers (#curvyfit) and snaps of herself and husband Justin Ervin all over each other. She met him, a cinematographer, at church when she was 21; they remained chaste until they married a year later. Seven years in and she said, “I had no idea that marriage could be this fun. The main thing we do is laugh.” There’s also swimwear, including plenty of unretouched shots with visible cellulite.

“My favorite part about modeling is talking to women whose lives are literally changed because I’ve just told my story or because they’ve seen an image of someone who looks like them in a store, in a magazine and they say, ‘Finally, I’m represented.’ That brings me joy.”

As she’s become Brand Ashley Graham she has also made strides into the luxury fashion world. At New York Fashion Week in September, she walked in shows for Prabal Gurung and Michael Kors. She would like to do more runway and editorial shoots, if only designers could sort out their schedules. “Designers want to design for me, but it’s a timing issue. A sample size, you could lend out the same dress to a couple of people. For me, you have to create a whole new dress.”

Given that designers usually produce samples in smaller sizes, curvy models often end up styled in a mix of lingerie and jewelry. “If more of us started saying, ‘I want to have a cool editorial where it’s actually about the fashion and not just my body,’ that’s what’s going to make our bodies more normal in mainstream fashion. Put clothes on us!”

Those options have begun through Graham’s new denim capsule collection for Marina Rinaldi. She has modeled for the brand before but this marks the first time she’s had design input. She started with denim because, “Nobody likes going denim shopping. I wanted to make denim that would fit my body but also fit many other different types of bodies.”

Her favorite pieces include a button-down denim shirt-bodysuit hybrid. “I like to tuck and show off my shape and I don’t love a baggy shirt, so I’ve solved that.” There’s also a button-through denim skirt. “You can have as high a slit as you want.’” And in true Ashley Graham fashion, she gets the last laugh.