“It was truly a miracle!” Stephanie Danler exclaimed on the phone from LA. She isn’t talking about the mega-success of her 2016 novel Sweetbitter, now a television series premiering on Starz this month, but the lucky recovery of car keys missing in the snow during a ski vacation. “We were going to have to be towed from the mountains to LA, and someone found the key. It’s a happy story but it threw me for a loop.”

Danler admitted the direction her life took with her debut novel, a fictional account based on her experiences as a server at Manhattan’s Union Square Cafe, was also one of life’s unexpected turns. “I never thought I would write about it. It took me by surprise that I might have a story that hadn’t been told in this way before.” The resulting coming-of-age tale centers on 22-year-old Tess, who comes to New York and experiences a “sensory awakening” of food, sex and self. With the book’s instant popularity, it’s perhaps not surprising that the story is becoming a series, created, executive-produced and written by Danler. The best-selling author graced Pulse’s cover in 2016 following the novel’s publication and remained a fixture in many national magazines, both as a subject and a contributor. The California native took a minute to wax on the highs and lows of it all and her continuous Sweetbitter journey.

How did the idea to do a TV series come about?
The idea was on my mind because there was still so much story left to tell. Within a restaurant you have a microcosm of the city—you have the guys washing dishes that are undocumented from Mexico, and then you have the guests who are spending $1,500 on a bottle of wine. I thought the high-low that comes together was a very ripe setting for a television show.

Were there any concerns about how your work would transition to the screen?
It’s definitely nerve-wracking. I don’t think I realized exactly how much letting go would be required until that first day in the writers’ room and you have all these incredibly talented, intelligent people pitching you new ideas based on your material. I started telling myself that the show is from the world of Sweetbitter; it’s not a literal adaption. We have the characters and the restaurant as a backdrop, but we take the show in directions the book didn’t go. That is when it became really scary, but also really exciting to me. 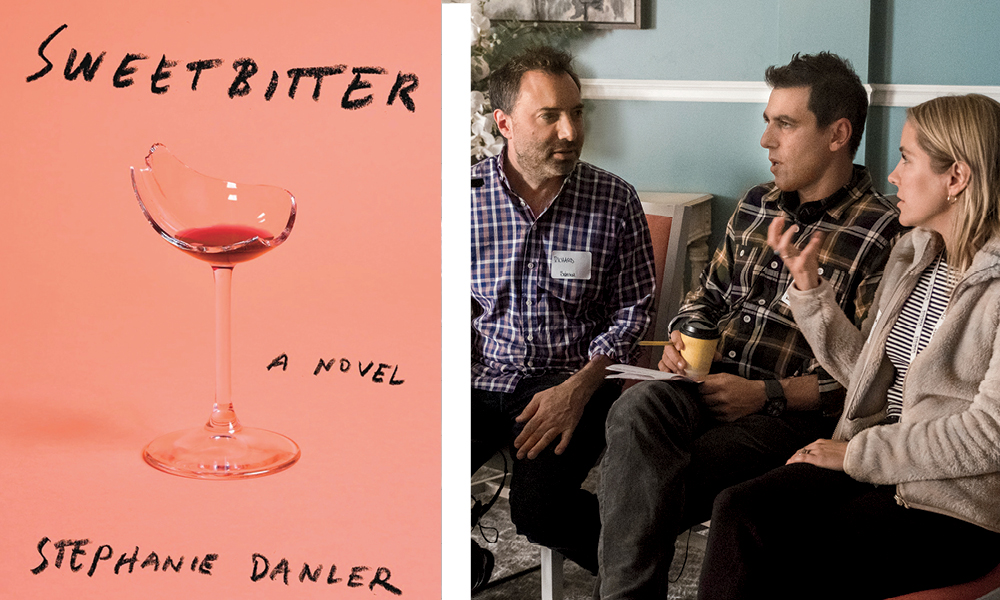 Transitioning her work from page to screen was a learning process for Danler, helped by a talented creative team including director Richard Shepard (far left) and showrunner Stuart Zicherman (middle).

How was script writing different than penning a novel?
Nobody really cares about the quality of the prose within a script. It was hard for me to learn that the best scripts are slightly underwritten—you’re really giving notes to the director and the actors. Nobody cares if you use the word “luminous” to describe the sky on a given day. They want, “New York, morning.” You don’t have to construct the world from sentences, you construct it through images.

Why does season one focus only on the first two weeks of Tess’ training in the restaurant, whereas the book covers a year’s time?
We have six 30-minute episodes, in thinking about the kind of story we could tell with the emotional depth that we wanted, we decided it was her arrival to New York City. It was an opportunity to slow that down and bring the viewer into the world, how this restaurant works and how these characters talk to each other. It felt like removing veils—she comes to New York and she expects it to be one thing and every episode another veil is removed. I think that getting to spend more time with some of the more lightly drawn characters of the book is going to be really fun for readers—how Sasha [another server] develops as Tess’ partner in crime throughout the first season. For future seasons there’s a way to focus on one week before Christmas and tell a world of story that way, but there’s also a way to go home with different characters and still keep our story moving.

How involved were you in casting? Were the actors what you envisioned?
Very involved. Every single person who ended up being cast was someone that I had a gut reaction to. Then they walk onto set one day and they start to speak as the character and my first thought is, “These are not my characters anymore—they belong to these actors!” Tess in the book arrives in New York as a blank slate, but when you look at Ella [Purnell] she carries in those big eyes an entire world and a set of experiences. Her natural energy and vigor made Tess so much braver and funnier than she ever was in the book, that character is hers now. The same was true of watching Caitlin FitzGerald play Simone [Tess’s mentor]. She brought out this Simone that is so much softer and slightly more vulnerable than the character in the book.

What was it like filming in New York?
I live in LA now so when we were discussing shooting there was talk about doing it in Los Angeles, but I knew there was no way to make this show without being in the city. I wanted all of us to be living this while filming it. The feeling of shutting down Fifth Avenue or 19th Street and putting up those huge lights and seeing these cameras everywhere and watching Ella Purnell walk in front of 100 extras—I lived in New York for so long and it felt like such a celebration, like such a homecoming. It’s really special and you cannot replicate it. Even if you’re on a stage, which we were for our restaurant [interiors], getting to walk out and see the skyline infuses your show. 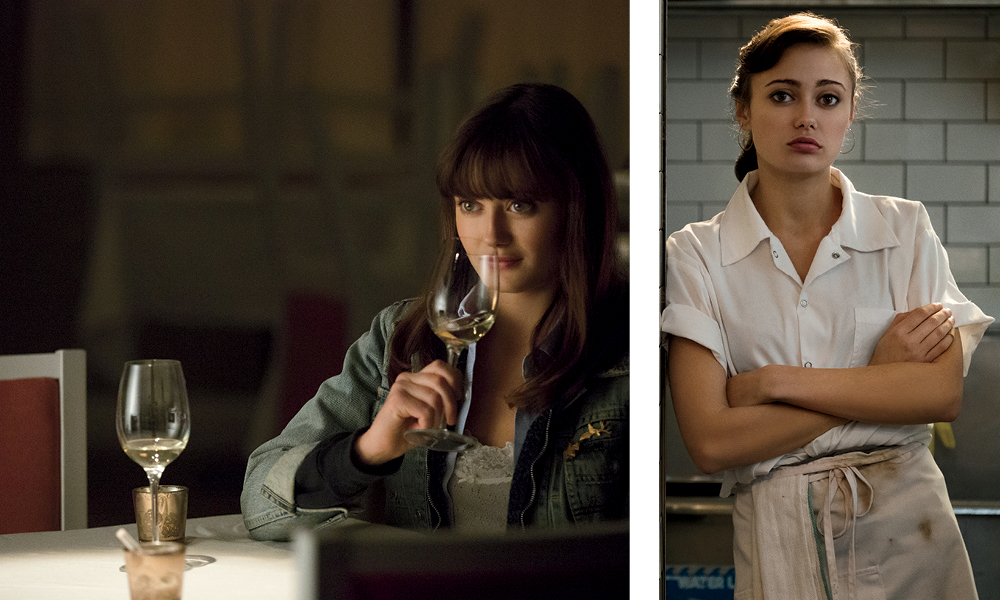 In Tess, played by Ella Purnell, we see someone trying to carve out a place in the world while simultaneously trying to figure out the world.

The show has been described as a “love letter to New York.” Do you think this story could have happened anywhere else?
No, never. It was always about New York. In some ways it was about leaving New York and looking back on the decade that shaped me from 22 to 32. This story is relatable because no matter where you are, if you dream about living in the city I think you share something in common with Tess and with the people that move to the city. But I think this sort of sensory awakening really couldn’t have happened anywhere else because what you’re talking about isn’t just food and wine, but sharpening your edges in a city where everyone around you is the absolute best at what they do. This idea that if you just go there you will become the best version of yourself, that dream is so specific to New York. I really can’t imagine it taking place anywhere else—although if they want to do season four in Paris I wouldn’t be so upset!

Why did you move to Los Angeles, do you miss New York?
I’m always there so I don’t get to miss it. I left right before the book came out and it was because after eleven years I wanted someplace quieter. I had this premonition that the world might become very noisy once Sweetbitter came out and I wanted to focus on writing. I thought LA for a novelist would be very, very quiet. What they say is mostly true, nobody reads here! I do know that LA matches the pace of life that I want right now, and I also know that when I land in New York City my brain still ignites. It’s the best place for me to do work. If all goes well with season two we’ll be back and I will continue this strange bi-costal life I find myself in.

What’s next for you?
I’m working on a book of nonfiction, linked personal essays in the style of an essay I wrote for Vogue about being raised by an addict. The book is about the inheritance of damage and how we repeat it or transcend it, or how we do both over and over again. It is not as much fun to write as Sweetbitter, but after that essay came out so many people reached out to me and I feel that even though I don’t have an answer, the conversation might be really important.

Looking back, what are your thoughts on your life since Sweetbitter was released?
At the completion of all my years in the restaurant industry, I write this book and all of a sudden I’m on a stage at Center Studios in New York City and I’m building a restaurant again. I’m picking the wall color and the china and the glassware, and then I’m teaching these actors how to open a bottle of wine, which is what I did all through my twenties when I would train the staff of a restaurant. The full-circle of that never fails to surprise me.