“What are days for?” Laurie Anderson asks in her film Heart of a Dog. “To wake us up.” That’s what artists like Anderson are for, too. Her days revolve around words, art, music, Buddhist outlooks, empathy and love through multimedia creations that portray a woman comfortable in her heart and generous with her thoughts.

Laurie Anderson, her one-woman exhibition, fills Guild Hall Museum’s galleries this June and July with works both vintage and brand-new that employ language, imagery, sound and virtual reality through filmmaking, poetry, music, and conceptual and visual artistry. Anderson, a trained violinist and sculptor, left behind traditional forms of art early in her career. For decades she’s been pushing boundaries, establishing new conduits and embracing technologies via a path of communication and sharing. Over the years, Anderson has collaborated with a who’s-who of creators and progressive thinkers, from her late husband Lou Reed to Beat Generation author William S. Burroughs to renowned musicians like the Kronos Quartet to artist Hsin-Chien Huang, with whom she created her ground-breaking 2017 VR installations to her beloved terrier Lolabelle.

At Guild Hall, Anderson said, “we’re going to do a couple of VR events which I think are really going to be fun for people because it’s such a new and geeky and thrilling art form…There will be two pieces to try out. One is called ‘Chalkroom’…That is a situation where you basically walk into a building made of words and some of the words are floating in the air and some of them you can write with tools and some you can stir around like clouds. And also, you can fly.” 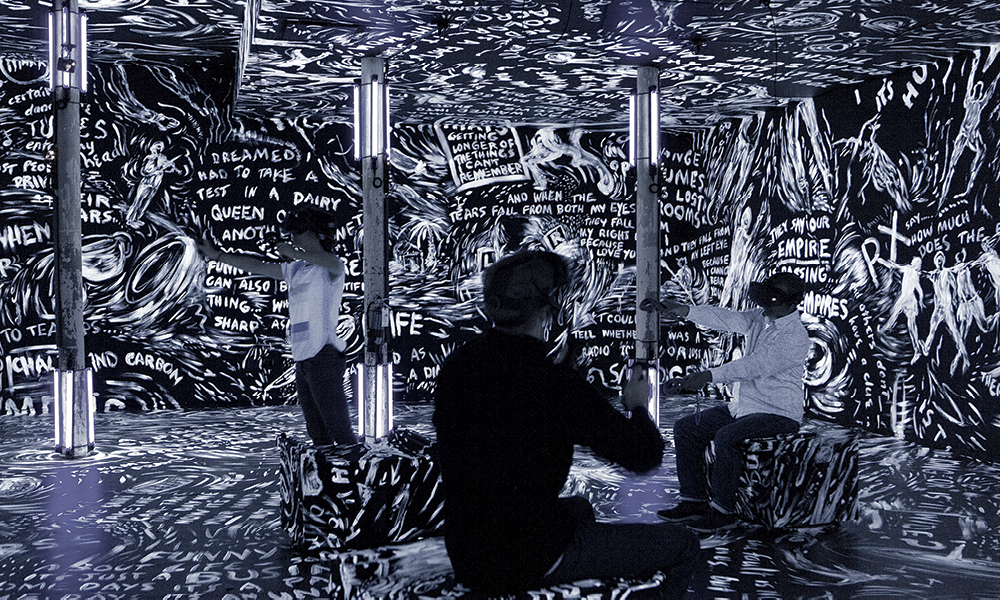 Flying and disembodiment are recurrent motifs in her work. “I like to get lost in things. As a kid, I liked to get lost in books, and that’s what I mean by disembodied. I mean just lose your sense of yourself and fall into another world. What I love about works of art is that they take you away.”

Taking you even further away from everyday experience than the “Chalkroom” world made of words is “Aloft,” the other VR piece being presented. “It felt like I was in outer space,” said museum director Christina Mossaides Strassfield. “In ‘Aloft’ you feel like you’re in a dream that this plane is falling apart. It’s completely disintegrating right in front of your eyes, and you are part of the disintegration…It doesn’t feel like it’s a tragedy. It feels like I’m going on to something else, I guess there is a spiritual quality to it.”

Anderson’s work is cutting-edge but rooted in things that go to the beginning of time or step entirely beyond it, as in her Buddhist-inspired meditation on the afterlife, “Lolabelle in the Bardo.” It covers almost every inch of the Moran Gallery with monumental, 10 x 14 foot drawings of Anderson’s dog Lolabelle.

“The Bardo is a 49-day period after death in which many Buddhists believe that the body of the person who has died undergoes a transformation of energy and becomes another form of energy. It’s that story of what happens to the body and energy after death, and every step along the way in the Bardo, through the eyes of a dog.”

She chose to make the drawings enormous for a number of reasons. Firstly, she admitted, “I love big things.” But also “the Bardo is a very dramatic place…It’s a story about immense transformation. I wanted the gestures not to be small but to be big and life-size…drawing like that is almost like playing the violin and the gesture of bowing is also a large one. It’s very much related to that.” 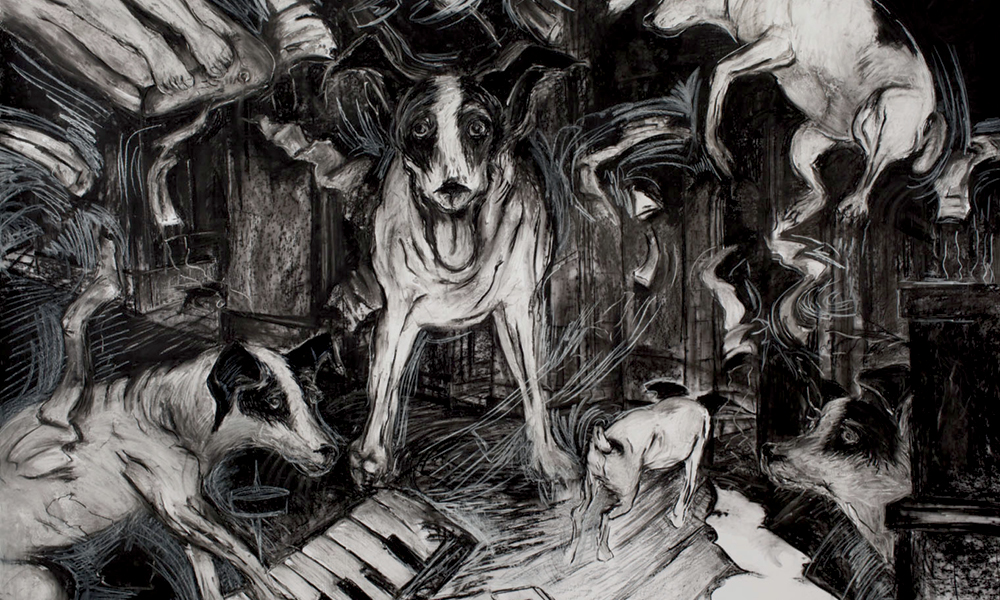 Ethereal, evocative, meditative, intellectual, fiercely creative and surprisingly down-to-earth for an artist who makes art to help herself and others feel as though they’re flying, Anderson and her work are borne by an undercurrent of love.

“I think the world is made of love. That’s all there is. I have a teacher, Mingyur Rinpoche, who talks about that…He says everything in the world is love. Everything that happens is love. Everything that you say and do is love…I can really see the world that way. I don’t think art has a mandate to help people or to make the world a better place. I really don’t, because then you’re talking about propaganda and telling people what to do. But secretly I do think that we have individual obligations to see if we can do something with what we know.”

Strassfield along with executive director Andrea Grover chose Anderson to fill the museum in the busy summer months. The artist, who has a home in Springs and spends as much time as she can there among trees she called “the most beautiful in the world,” received the 2011 Guild Hall Lifetime Achievement Award in the Visual Arts and has performed there several times. But this is her first presentation of drawings and VR installations. Guild Hall will be the only place where visitors can see both “Chalkroom” and “Aloft.”

“I hope that people come. I hope they come more than once because it does take a while to learn VR, and this will give people a chance to get pretty good at it. If you come first and you think ‘I’m just bumping into walls,’ don’t give up. Just come again and you’ll soon be an expert.”