For the fourth time in four decades, from June 14-17, Long Island’s Shinnecock Golf Club in Southampton will be hosting a U.S. Open Championship, the only club to host an Open Championship in three different centuries: 1800s, 1900s and 2000s.

Shinnecock is a dream course for the golf purist: the truest test in the game of one’s all-around shot-making abilities. It is an iconic club in the strictest sense. Founded in 1891, Shinnecock Hills Golf Club is the oldest incorporated golf club in the U.S. and was one of the five founding-member clubs of the United States Golf Association (USGA). The Shinnecock Hills clubhouse is the oldest in the country, designed in 1892 by Stanford White from the architectural firm of McKim, Mead and White. The club is loaded with many other firsts in the history of the game, too. In 1893, a nine-hole, ladies-only course was designed, making Shinnecock the first club to admit women. Seventeen-year-old John Shippen was the first African-American to play in a U.S. Open—here in 1896. Shippen took up the game at the age of 15, caddied at Shinnecock and finished tied for sixth in 1896, earning $10.00 for his efforts.

Playing Shinnecock, one can’t help but feel awed by its rich tradition. The famed links-like layout is a special walk on many levels. Since the club oozes with history, it’s easy to imagine the course in the late 1800s, punctuated with men wearing knickers and women in crinolines, bustles and petticoats, hitting hickory-shafted woods and socializing on the clubhouse’s infamous patio with sweeping views of the undulating greens and wind-blown, swaying fescue that glistens in the changing, seasonal light. The members played only 12 holes back then, as designed by Willie Davis in 1891. The neighboring Shinnecock Indians helped build it. The course expanded to 18 holes in the spring of 1895, and in the 30s, William Flynn reshaped it.

Aside from its history, the course is a treasure to play, requiring extreme accuracy off the tee, laser-sharp approach shots, an exceptional short game and precise putting. And when the prevailing headwinds kick up, good luck! One of the hardest things about playing Shinnecock is judging the wind direction. “Day to day, I think you can count on the wind averaging between ten to fifteen miles-per-hour,” confirmed Jack Druga, Shinnecock’s head golf pro. “Then you’ve got a shifting of the wind as the day goes on. The ocean-bay effect moves the wind around. The wind that the guys play at eight am may be totally different than it can be at one pm.” 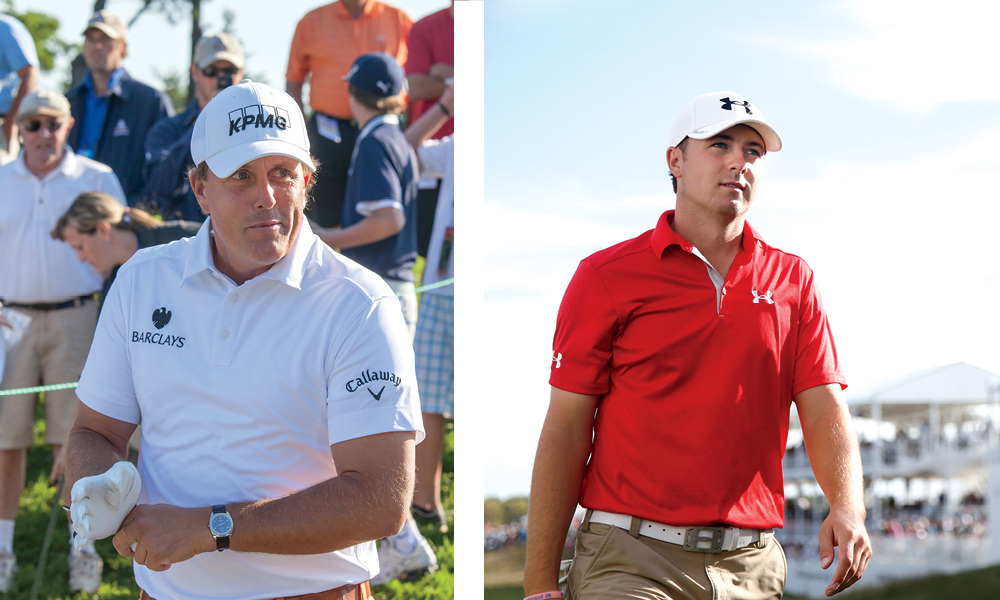 Left: Phil Michelson has won every Major except the U.S. Open. He will look to change that this month. || Right: Texas native Jordan Spieth won the 2015 U.S. Open and looks to repeat that performance at Shinnecock.

Players will be confronted with the wind factor immediately upon stepping to the first tee area, where they’ll have to figure out precisely how much it will affect their tee shot on the par-four, downhill, dog-leg right layout. “Oftentimes the American flag and the club flag are blowing in two different directions,” added Druga, who took over in 2007. “That makes the wind so confusing to gauge. The prevailing wind [in June] is normally southwest but rarely do we get the wind blowing the same direction all day.”

In 2012, the course underwent a restoration to bring back the vision and strategy of the William Flynn design of the 30s. Further tweaking took place last fall to get it ready for the U.S. Open.

If every back tee is used, the course will be stretched to a maximum of 7,450 yards for the 2018 Open. The range from the back tees during the four days of the championship will be 7,350-7,450 yards. The most notable change, distance-wise, is the downhill par-four 14th, where a new tee box over a practice green near the clubhouse expands the hole to 519 yards.

And the winding par-five 16th has been stretched to 616 yards with the tees moved back almost 60 yards. “The sixteenth went from a very short par-five to now a very legitimate long par-five where I think a little bit of anything can happen,” Druga said. “The landing area for drives will be around where the fairway bunkers are, which were not a factor in the past…And the uphill, par-three second hole has gone from two-hundred-twenty-five to two-hundred-fifty-two yards. That’s pretty significant on a par-three.”

About seven acres of fairway were converted into rough. The fairways were also tightened to bring the widths to U.S. Open standards. “We look at the U.S. Open as the ultimate test of golf and accuracy is a key component,” Hall added. “We’ve tightened things up a bit. That said, it will be the widest U.S. Open we’ve played here in the last four decades…There is all types of shot-making that we’re asking the players to demonstrate during a U.S. Open, but accuracy is certainly a key and a focus of the work that took place.” 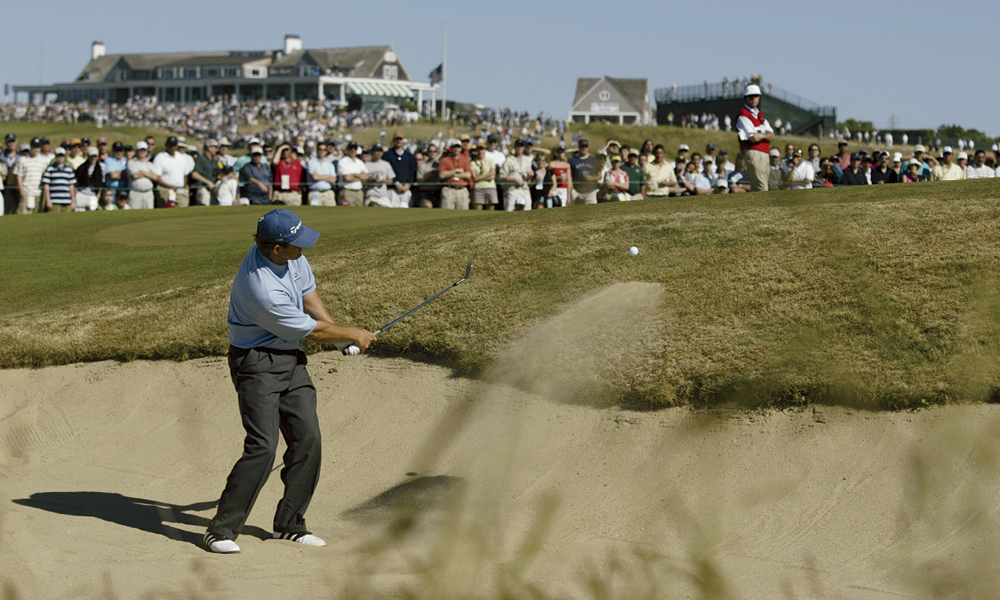 Retief Goosen won the U.S. Open in 2004, the last time it was played at Shinnecock.

On the dog-leg left 18th hole, Hall described “the fairway was some fifty-five yards wide, but that’s just a bit too much to really be true to the ultimate test of accuracy…We’ve settled on forty to forty-two yards wide on this particular fairway, obviously a very challenging finishing hole. The real key is to make sure they can fit that tee shot [in the landing area]. That forty-yard wide is consistent for what we’re after for the U.S. Open.

“For the previous three U.S. Opens, the 18th fairway played about thirty to thirty-two yards wide. While certainly a great test of accuracy, it’s not consistent with the William Flynn architecture and strategy. So we tried to find a happy medium here and we think this will achieve the best for the U.S. Open and be true to the architecture. I think it’s just the right balance.”

Of course, all golf eyes will be watching the Redan Hole, the par-three, 7th hole where sun and wind dried out the green so bad during the 2004 Open that tee shots would not stop rolling off what became a dried-out, stone-hard putting surface; a green that is difficult even in perfect conditions, with a steep right-to-left slope. Officials had to water the hole between playing groups. Players faced varying speeds that almost compromised the championship. Since then the USGA has erred on the side of caution in setting up Open courses to ensure there won’t be a repeat of 2004.

“I’m sure the guys are going to love the golf course. Hopefully we’ll get some firm windy conditions for them to play,” Druga said. The amount of wind surely provides that unpredictable factor. And it certainly helps if you’ve played the course before, know what to expect and have a caddie that really understands the greens. “The guys who have been out to play Shinnecock in the last few years include Rory McIlroy, Rickie Fowler, Justin Thomas, Adam Scott and Justin Rose,” Druga shared.

The galleries at Shinnecock and the millions watching are in for an incredible treat. But then, just the fact that the U.S. Open is returning to Shinnecock is a treat in itself.