Emmy Award-winning cinematographer Shawn Heinrichs developed a love for the ocean as a young boy growing up on South Africa’s Wild Coast. At the time, it was pouring with marine life. He recalled humpback whales migrating seasonally up the coast and the sardine run that saw billions of the small fish gathering along the beach. His family later moved to Philadelphia, and, in the early 90s, Heinrichs returned to his homeland to dive. But the water was nothing like he remembered.

“The reefs were largely chocked with algae and all the big fish were gone. I couldn’t believe that this was the same world that I had seen as a small child,” said Heinrichs, the founder of Blue Sphere Foundation, an organization working to safeguard the oceans and marine species. “It was then that…my passion of photography expanded and it formed a purpose which was to try and conserve that which I was passionate about.”

He’s bringing his conservation efforts to the Southampton Arts Center with “Light on Shadow,” a photo exhibition on display from May 26 through July 16. Photographs which Heinrichs captured all over the world fill the space and demonstrate the beauty within the ocean. Think sharks surrounded by light rays, manta rays dancing and whale mothers swimming with their calves. But hidden in the captivating photos is a story of destruction, one that he hopes visitors will understand after viewing the exhibit.

“Humans are directly, deliberately and systematically emptying the ocean of all its most valuable species,” he said. “These species are beings, each of them are sentient and we can connect with them.” 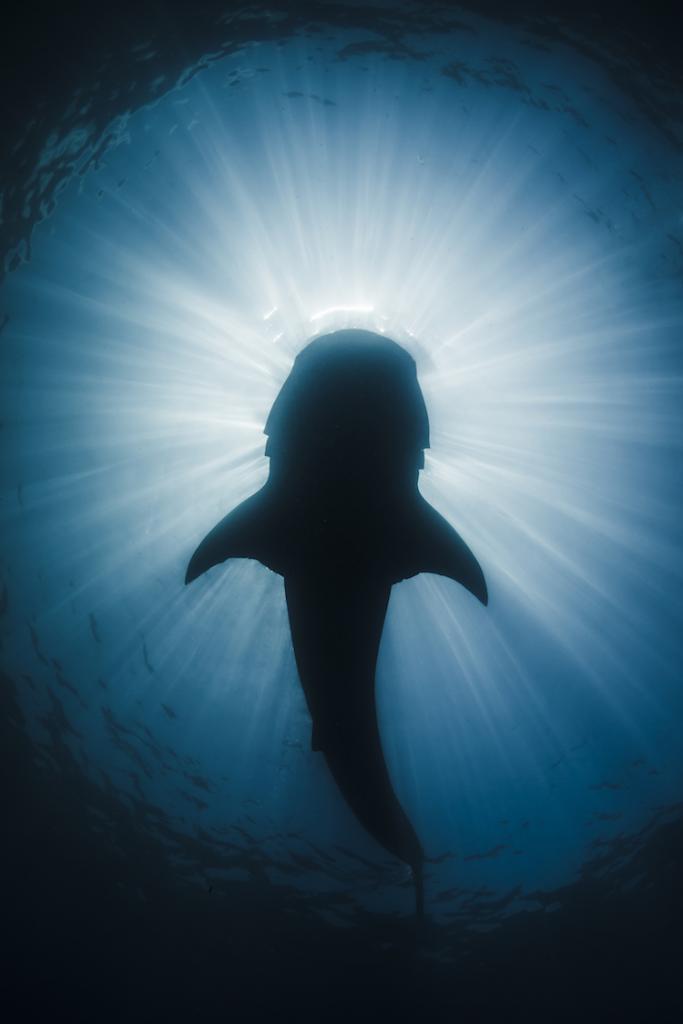 The connection is seen through images like “Flight of the Humpback,” which took him 50 days in the water and over a half a dozen years to capture. A 50-foot mother humpback whale is seen with her 12-foot calf as a male humpback whale pursues them. The mother and calf swam past Heinrichs and glared straight into the camera. “It was one of those images that captured not only that incredible, beautiful bond between mother and calf but also the majesty and power of these charismatic animals,” he said.

Other images, including “10,000 fins,” tell a different story. It shows thousands of shark fins drying in a facility in Taiwan. Heinrichs snapped the photo on a rooftop while he was investigating the global shark fin trade. “That image shows the gruesome reality and scale of the trade and how, with these fins, we are eradicating an entire family of species of sharks across the entire ocean,” he said.

The marine threats don’t stop there. The majority of the world’s coral reefs are expected to die by 2050 while 90 percent of big fish are already gone because of overfishing. Human emissions of greenhouse gases are also heating the oceans. “We’re choking out the very habitats that support marine life and further damaging an already crumbling system,” Heinrichs said.

In the midst of tragedy, there’s also been an awakening. Species including manta rays have received international protection and there’s been a decline in demand for shark fin soup as a result of strong conservative campaigns. Despite this, Heinrichs pointed out the future of marine life remains in question.

“The Hamptons is a beautiful crossroads to take a moment to step back from the busy rigmarole of work life and [realize] we are all connected, we are an island community,” he said. “Let’s reflect on that for just a moment and think about how our lifestyle and our decisions are either helping that or leading to its demise.”