When is a glove not a glove? In the hands of Claire Watson—found things are transformed. Just as René Magritte proclaimed “This is not a pipe” on a picture of a pipe, Watson challenges assumptions, changes ideas, subverts and converts objects to her vision. Materials like rope, gloves, household implements and pipes (in a nod to Magritte) are reshaped, reconstructed and reimagined by Watson in works that blend sculpture, imagery, found objects and recycling.

It’s not just material Watson recycles, it’s remembered and forgotten histories as well. She started with tobacco pipes and leather shoes and gloves, tearing them apart to build structures that whisper of histories, mysteries and conundrums. In her work, shoes may be used to map a dance, gloves have convoluted fingers that extend beyond usability. “I’m really interested in paradox and confounding function,” Watson said.

She’s also interested in reclamation. “I’ve always worked with found objects.” Lately, they’re used leather jackets and pants found in thrift stores, laden with layers of time past. “I’m all about finding and repurposing materials. I always have been. That’s part of the attraction of the found object, how to transform it and make it into something new or different. In this case, the reference to the figure, the body, the animal, is in there. It’s in the materials so I don’t need to create a figure-shaped piece. I don’t need to create any kind of narrative or literal reference that points back to the figure. It’s in there.

“I set up rules for myself. The challenge, or the game or the pleasure of it for me, but also the restriction, is that I must use the pattern pieces as found objects, though I can take them apart.” 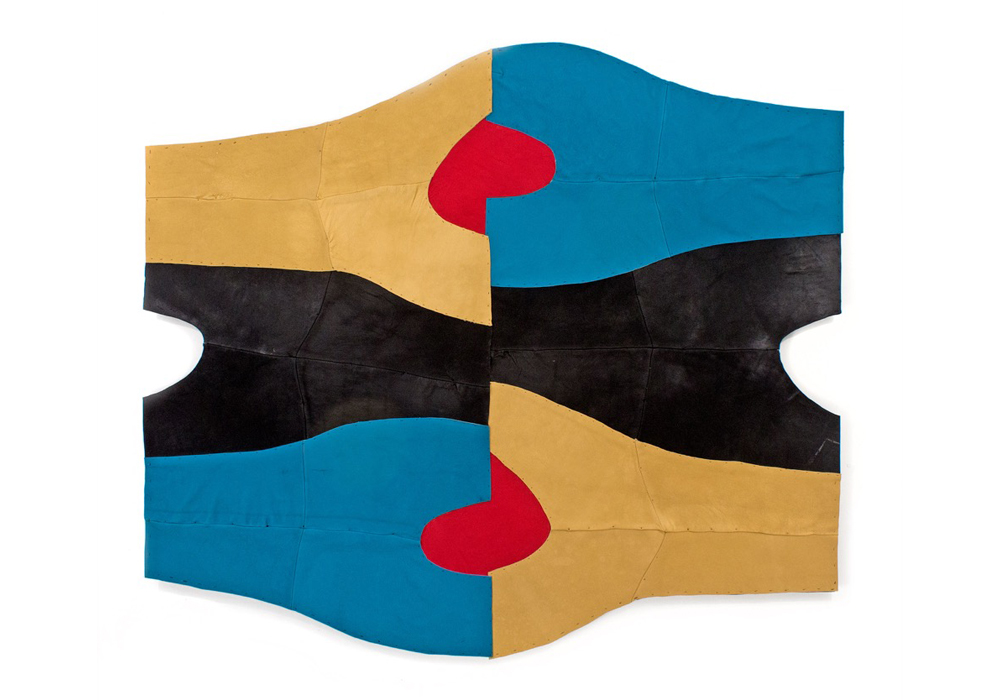 “Match,” a large, wall-hung relief sculpture reads like a puzzle in bright, primary colors, whose pieces refuse to click together. It leaves behind a question, some tension. Resolving it is the viewer’s work. “Those are three pairs of pants, a blue, a black and a yellow pair. And they’re split along the seam of the outside hip and then I boil it and flatten it out. With boiling, I find that I like the accidents that result—I want to work with the accidents. So there’s that chance element. It puts a layer of remove between ourselves and the original pants, but it also heightens the pores and the wrinkles and the evidence of the animal life that’s underneath all of that, and I like that.

“This reads a certain way from across the room but not necessarily as leather. I hope to have these two things going on. From a distance the kind of Gestalt experience but then rewarding patience if the viewer comes closer and finds evidence of craft, and then under that the history that then goes back to the animal who wore that hide before it was made into a leather jacket…I’m really interested in how costume is identity, and a change of costume and we change our persona or public identity. When we’ve grown out of certain styles or self-images we move on and these things get abandoned, and there’s something very haunting about that.”

The journey of finding a paradox of time or material or narrative and then resolving it is what keeps Watson creating. “I’m happiest when I’m working on something and I’m surprised. I didn’t know that was going to happen, and that leads to something unexpected…the idea of puzzle pieces, I like the idea of putting them back together the wrong way. That’s not how it goes, but that’s how it works.”