In 1937, the Grumman Aircraft Engineering Corporation moved its operations to Bethpage. It wasn’t long after that the company began building planes for the Navy and was eventually commissioned to construct the Apollo Lunar Module. At its peak in 1986, Grumman occupied six million square feet of structures in the middle of Nassau County. Today, that same ground is strolled not by engineers or ironworkers, but by the likes of Robert De Niro, Angelina Jolie, Julia Roberts and Rihanna. This is the story of how a former aircraft production facility became a burgeoning hub of Hollywood productions.

When Northrop Corporation acquired Grumman in the 90s, it shut down the Bethpage operation, leaving a gaping hole in Nassau’s landscape. In 2007, businessman Parviz Farahzad purchased some of the land with no intentions of it becoming a film studio. The former math professor wasn’t familiar with the movie business and intended to turn the space into research labs, offices and a tech incubator until a small independent film production came calling.

Not long after, producers for the Angelina Jolie blockbuster Salt were eyeing the facility as well. “The problem was that they had taken all the water out and all the power out. It needed a whole bunch of things to come up to code,” said Debra Markowitz, director of the Nassau County Film Office. “We worked with the town of Oyster Bay trying to get the approvals. Once that happened, Parviz Farahzad realized that this should be a studio.” And Grumman Studios was born.

Across the street, Bethpage-based Steel Equities purchased a 95-acre plot of the former Grumman Corporation property and got right to work developing Gold Coast Studios. “We had some warehouse space, and we decided to get the stages approved so they were New York State qualified for the tax credit,” said Gold Coast Studios principal Lyndsey Laverty. “And right when we did that, we signed our first movie called Man on a Ledge.” 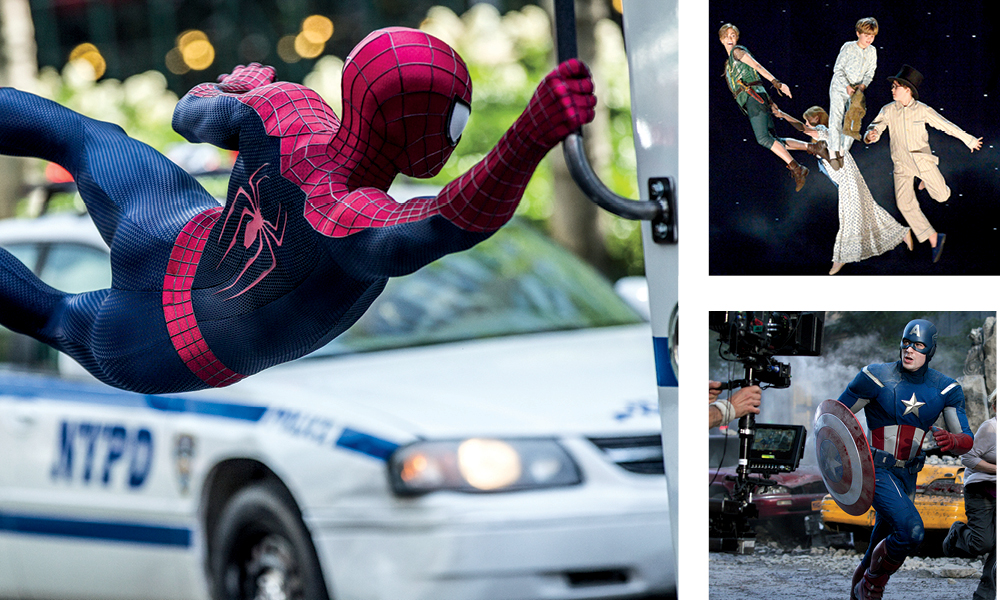 With the studios up and running, they needed productions to fill the space. It was a problem that just a few years ago seemed unsolvable. “People in the past, I’d say fifteen years ago, they had what I called aquaphobia,” Markowitz recalled. “They were not coming over the bridge. If they could film in the city, they were going to stay in the city.”

Fortunately for the studios, recent years have seen a skyrocketing amount of content being created skyrocket, aided by the introduction of streaming services like Netflix, Hulu and Amazon creating original shows and movies. According to a study done by FX Network, between 2002 and 2017, the number of scripted TV shows increased by nearly 170 percent, going from 182 per year to 487. Yet the space to film such projects in the New York City area had, until recently, remained relatively stagnate. When studios in the city filled up, the remaining productions were squeezed outward. “There’s a lot of content being developed in New York City locations. Because the production is so heavy there, it’s being pushed out into Nassau and Suffolk,” said Diana Cherryholmes, director of Suffolk County’s Office of Film and Cultural Affairs. With nowhere else to go, production companies overcame their fear of water, crossed the East River and came to Long Island.

Still, particularly in the beginning, Long Island studios had to offer something city studios couldn’t. “You’d have to have a larger, more unique space or it would have to be less expensive. Spider Man needed space, as much space as they could handle,” said Markowitz, referring to the 2014 film that was filmed at both Grumman and Gold Coast. “The only place they could do that at the time was out here.”

To provide the New York City aesthetic, Gold Coast has a Times Square lot that mimics the “Crossroads of the World” as well as a subway car stage. Then there are the often-forgotten attributes non-urban locales offer. “We have parking,” Farahzad reminded. 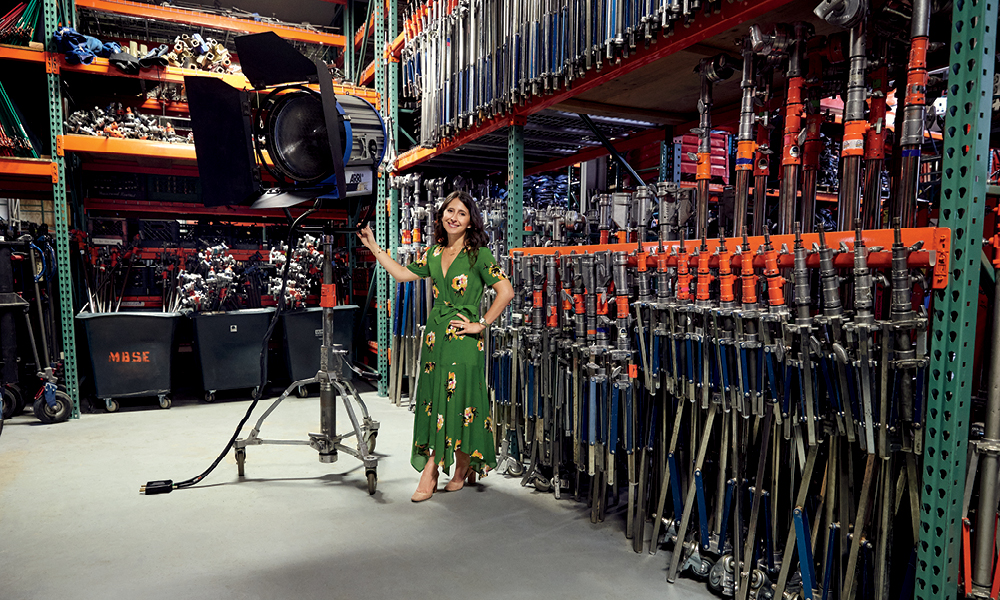 Lyndsey Laverty spearheaded a transition that saw several empty warehouses converted into a full-fledged movie studio, comparable to any in the big city. image: bruce soyez-bernard

The preface of the local film boom is that the film and television industry is no different than any other: money dictates everything. “The tax credit in New York is really what drives the film business,” Laverty said. This was the impetus for New York State’s Film Tax Credit Program, which allocates tax credits to productions filming in the state. The program, launched in 2004, originally allowed for up to $25 million per year in tax credit but has progressed to $420 million annually. The caveat in the deal—and a lifeline to regional facilities like Gold Coast and Grumman—is that at least 10 percent of principle photography shooting days must be held at a qualified production facility in New York State. Eligible companies receive a tax credit of 30 percent on qualified production costs incurred in state. This generally includes set construction, crews, camera equipment, grip equipment and props.

Long Island has three qualified facilities in Gold Coast, Grumman and Sands Point Preserve, though the latter also operates as a public park and can draw revenue through other means. The tax credit helped enable the former two locations to turn their spaces into studios. When Farahzad purchased the land, “it wasn’t a studio yet, just a facility,” Markowitz said. “It was rented out and had maybe 35 production days the first year.” After witnessing the possibilities firsthand, Farahzad agreed that Grumman should be turned into a year-round, full-time studio. “That’s what really draws production to New York,” Farahzad said. “The tax incentives bring production to New York, and then they have to do the production in a qualified film studio.”

The program has been a boon for the state. Since 2011, more than 1,700 film and television projects have submitted applications, generating an estimated $20.4 billion in spending and creating more than 1.2 million new jobs. “It’s the economic return to the community,” Cherryholmes said. “When [production crews are] here, they’re spending money on the location fees, the rentals of private homes, use of property, going to Costco—which employs local residents. They might rent a hall at a local church or school. All of that feeds back into the community.” 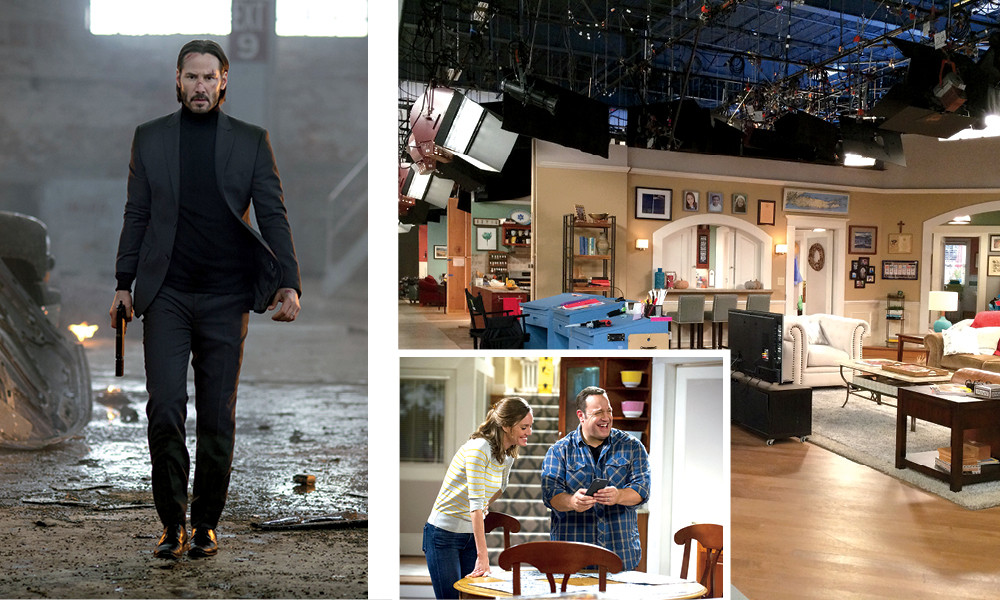 Although tax incentives help, when competing with other in-state facilities, it is essentially a wash for local studios. Additionally, New York City spaces provide geographical and scenic convenience. In order to remain competitive, Long Island studios must offer something unique. For Gold Coast, that means going above and beyond. “We live and die by our reputation,” Laverty claimed. “Every production that comes here, we truly want them to want to come back so we bend over backward to make everyone happy when they come here.”

This even includes making physical alterations to the stages. “We filmed the movie Sisters here, and they were looking for holding rooms. We were able to put in the holding rooms for them while the production was going on. It was an extra incentive for them to come out here.” By customizing its space, Gold Coast immediately went from a place the film could work at to a place it should work at, a philosophy that has been the catalyst for Gold Coast’s growth. “We do improvements to the space for every production, whether it’s holding rooms or adding hair and makeup or upping our electric or adding air conditioning. We’re constantly fixing our studios to make them bigger and better specifically for each production because we feel like if something is good for one production, it’s definitely going to be good for the next production.” And it’s worked. Gold Coast has worked several times with the likes of HBO, Amazon and Sony.

In 2016, the studio scored a major gig by booking Stony Brook–raised Kevin James’ new sitcom Kevin Can Wait. It is the first prime-time television series shot entirely on Long Island. “Having a TV show is really like a dream for a studio because it’s longer term,” Laverty noted. “Films are great, but they come and they go, so there’s a challenge in trying to fill the gap.” The show was canceled earlier this year after two seasons but not before Gold Coast did a custom build-out of the space it was shot in, adding dressing rooms, writing offices and more. Though Kevin Can Wait is gone, what’s left behind is the perfect accommodation for another television show to step in and fill the gap, and Gold Coast has already been in talks to make that happen.

This has forged a niche in the company’s business model as not just the home of big-budget blockbusters like this summer’s Ocean’s Eight, but also televised live musicals, which have taken pop culture by storm over the past several years. Starting in 2013, The Sound of Music, Peter Pan and The Wiz have all been performed at the studio and broadcast live nationwide, an operation that logistically couldn’t happen at most studio lots. During a live musical, the performance does not have the luxury of time and cannot afford to have performers running between buildings. Instead, all sets must be at the ready under one roof, allowing the actors to transition between them seamlessly.

In January 2017, governor Andrew Cuomo extended the state’s film production tax credit until 2022. Earlier this year, Netflix announced that it will release approximately 700 original TV shows in 2018. With the backing of New York State and the media landscape continuing to expand and diversify, Gold Coast, Grumman and the entire local film and television production industry appear to be on solid ground. “As long as there’s still content needed, people need a place to film these things. They’re just going to continue to grow,” Markowitz said. “We’ve been very busy.”